The orbital grouping of GLONASS swept the Earth 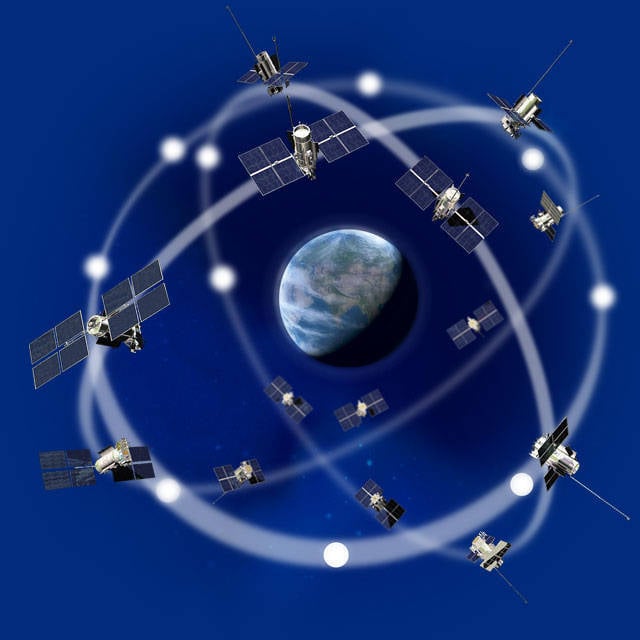 One of the hottest topics of recent times is the GLONASS system. Still, this is the second, and therefore, an alternative positional system. And this affects the prospects of the entire system, including the military.

The idea of ​​creating your own positional system for the Soviet army appeared in 60, and its first satellite flew in 1982. In 95, the satellite 24 was already in its orbits, and the system was commissioned. But the 90s of the last century were not the best time for science as a whole and its defense part. At the beginning of the new century, only 6 satellites worked - a quarter of the required number. Yes, these devices were already outdated, the Glonass model developed by the NPO Applied Mechanics (now OAO Information Satellite Systems named after MF Reshetnev).

All the nineties were disputes: do we need our own navigation system? The arguments were both for and against, but in the end, in practice, the point of view was dominant in contra: for a number of reasons, financing was more than scarce, and GLONASS developed very slowly and only on the ground. Work on the topic, the development of new satellites, etc. They went, but before the launch and operation of new spacecraft it never came.

The country risked to be left without its own positional system at all, which could have been fraught with the background of a number of 2000’s early events: both in Afghanistan and Iraq, opponents of NATO troops suddenly had problems determining their own coordinates. Although the Americans and their allies had no such problems.

And in 2001, the state program Global Navigation System was announced. The state has clearly and clearly stated: the system is and will be money for its creation. In addition, GLONASS ceased to be a purely military system, and its civilian use was specified. Initially, according to the program, it was planned to “cover” the entire territory of the country with satellites by 2008, and launch GLONASS all over the planet in 2010. It was planned to use the new Glonass-M satellites in the system, the assignments for which were received at NPO PM.

In practice, the planned dates were corrected several times for valid reasons (several old satellites during the creation of the orbital constellation were taken out of service "by age"), but at the moment GLONASS is fully ready to start using.
October 3 from the Plesetsk cosmodrome took off the Proton-M launch vehicle with the latest satellite of the system. Thus, 28 Glonass-M devices are currently flying over the Earth, of which 23 is already fully exploited, 2 is still being prepared for the beginning of use, and the remaining 3 is temporarily being serviced. Those two satellites that are still being prepared for work will “start it” within the next month or one and a half. Three more vehicles will be sent to space in November and will serve as a system reserve for the time being.

This year the first Glonass-K satellite was sent into orbit. He is just passing the tests, but his stated and confirmed characteristics surpass the M-series of satellites. The main parameter for the user - location accuracy - for Glonass-K is about 1-2 meters, which makes the GLONASS system a direct and strong competitor to the only existing positional system - NAVSTAR GPS. For comparison, the Glonass-M satellites give an accuracy of the order of 5-6 meters. Glonass-K can also carry equipment for working with the Cospas-Sarsat rescue system, has a resource in 10 years and is assembled exclusively from domestic components. "Glonass-M", in turn, works only 7 years and has in its composition the units of French production.

NewsOf course, they are good, but a fair question arises: how much does it all cost and will it pay off? According to various sources, over the past ten years, about 2 billion dollars have been spent on the creation of GLONASS. Until 2020, it is planned to allocate another 8-10 billion. At the same time, there are three options for the development of the system. This is a “cheap” option (200-250 billion rubles), in which case there may be problems with the promotion of the system; “Medium” (300-350 billion rubles) and expensive (more than 400 billion rubles), which implies the complete development of all the necessary systems. The second option is considered to be the most appropriate - it will allow supporting the orbital grouping and introduce user equipment with state support.

The experience of American GPS shows that investing in navigation systems is worth the money. The head of the Federal Space Agency, V. Popovkin, talks about the amount of satellite navigation services in 250-260 billions of dollars. Russian technology still makes up only 3% of this money. There is no talk about a cardinal increase in the Russian market share. So far there are too few user devices with GLONASS support on the market - only a few of them. In addition, almost all of them are designed to use both navigation systems: GPS and GLONASS.

Do not forget about the rather skeptical attitude of potential users to the domestic system. In this context, we can recall how several months ago a devastating article scattered across blogs and websites, in which the GLONASS inferiority was proved using the number of satellites: its navigator saw up to 11 GPS satellites and only one Glonass-M. In turn, the analysis of this material, which clearly stated that this model of the navigator can only work with 12 satellites at the same time and perceives GPS as a priority system, has not received such widespread use.

And in the meantime, despite moaning in blogs, GLONASS is not only being built, but also being exported. Last week in Moscow the ministers of defense of Russia and India A. Serdyukov and A.К. Anthony agreed on military-technical cooperation. The Indian side was invited to participate in the GLONASS system and use it in full military form. Delhi is unlikely to refuse the offer - the United States is not so "friendly" with India to transfer such serious and important technologies to it.

We are in Yandex Zen
Navigation brick
Space targets
9 comments
Information
Dear reader, to leave comments on the publication, you must to register.