November 23 2013
29
Soon after the end of the Second World War in many countries of the world, they seriously thought about the individual protection for each soldier. Of course, the development existed much earlier, but only by this time did the materials and technologies appear that made it possible to manufacture high-quality, reliable and relatively light body armor.

And if there was a way to protect the soldier, it is quite clear that there was also a need to find ways to overcome the defense and hit the enemy soldier. In the Soviet Union, this issue was taken very seriously. Experts analyzed the situation and found two ways to reliably hit the enemy, protected by body armor.

Firstly, this is the use of a more powerful cartridge, allowing you to pierce a bulletproof vest and hit the enemy. This option was noted almost immediately. The increase in power forced to use more dimensional weapon. And the cost of developing completely new ammunition and subsequent production would be very, very expensive.

Secondly, it was possible to increase the accuracy of the weapon and to increase the distance of defeat. That is, it was necessary to develop a weapon that could be used to strike an adversary in parts of the body that are not protected by armor at long range. And it is precisely on this path of development and decided to go.

First of all, the experts analyzed - what prevents the sniper from firing accurate fire, hitting the enemy in unprotected parts of the body? As it turned out - a great distance and side wind. Of course, any experienced sniper who has a few thousand rounds of ammunition can easily identify both the first and the second, taking corrections by eye, spending a few seconds on it, and hitting an enemy who is a half kilometer away and more. However, what about those snipers who have only a few dozen rounds of ammunition, and there is simply no time for additional training? It was a surprising and seemingly completely impossible decision to implement - to reduce the influence of distance and side wind on the flight of a bullet. That is, the bullet should have hit the enemy at a great distance, but at the same time the shooting should have been carried out with a minimum number of corrections for distance and wind.

Yes, it may seem impossible to someone to create such a weapon. But Soviet experts got down to business. It was decided to first create a new type of ammunition, and then a rifle, which would allow for the best shooting performance.

The transition from words to deeds turned out to be not so simple as it might seem. Not so long ago, a new SVD rifle was adopted, the indicators of which favorably distinguished it from any other analogues created in the USSR and around the world. She had excellent accuracy, and in addition - was developed under the usual cartridge caliber 7,62x54, which is not the first decade of successfully used in our country. That is, the production of this rifle was quite simple and economical. So many of the military sincerely did not understand - why do we need new weapons, if the existing one meets all the requirements.

And still with difficulty, with difficulty, but the development began. The task was very difficult, so the appropriate cartridge was created only in the early eighties. The caliber turned out to be very non-standard - millimeters 6x49. However, he was significantly inferior to the caliber of the SVD in size and weight, and perfectly satisfied all the requirements expressed by the experts - the goal was amazed at a great distance when making minimum corrections during aiming.

Of course, for the new patron it was necessary to develop a new weapon. And to him also made certain demands. The main of them were dimensions. The new rifle should not have a length in excess of 1225 millimeters. This became a mandatory requirement, since the sniper had to travel regularly in the transport compartment of the infantry fighting vehicles and armored personnel carriers, and a large-sized rifle could cause serious problems during transportation. But at the same time, the barrel length could not be less than 720 millimeters in order to realize the excellent characteristics of the cartridge.

It was originally planned to modify the Dragunov sniper rifle, but this idea had to be immediately abandoned. Corresponding to the total length (1220 millimeters), it did not fit the length of the trunk (total millimeters 620). And firing a weapon with such a barrel would nullify all the improved performance of the new cartridge, reducing the new characteristics to the characteristics of the SVD. Reducing the length of the receiver also could not solve the problem, solely for technical reasons. Reducing the butt would simply lead to the fact that the sniper could not shoot with sufficient comfort, and hence the accuracy would be significantly reduced.

That is why it was decided to develop a new rifle based on a Kalashnikov assault rifle. Of course, a number of changes were made, after which quite a few of the machine’s mechanism remained - the principle of mounting the position of the receiver was changed, which made it possible to increase the accuracy of shooting. To reduce the barrel length, a special flame arrester has also been designed. The new technology has reduced its length by almost 5 centimeters relative to the flame arrester of the SVD.

Frame butt SVK allowed to reduce the overall weight, and the front part of the butt was a pistol grip, which was another design finding. SVK-S, having a folding stock, was equipped with a removable pistol grip, because of which the weight increased by one hundred grams. A box-shaped two-row magazine for a rifle could hold up to 10 cartridges, which is quite consistent with any sniper rifles. Shooting from a rifle could be carried out with or without a sniper scope. Especially for this, it was equipped with open sighting devices - the front sight and the whole. 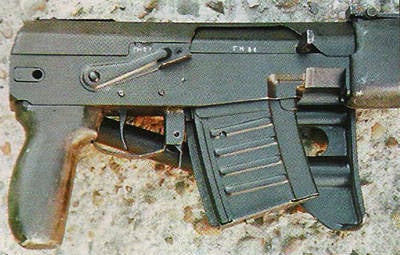 During the shooting, the sniper easily put all ten bullets in a circle with a diameter of five centimeters at a distance of one hundred meters. However, this was not the limit of the rifle! A test was conducted, which compared the combat characteristics of the SVD and SVK. And the new rifle really showed great results!

When firing at a distance of 630 meters, the accuracy of the SVK exceeded the accuracy of the SVD by 1.33 times. Increasing the distance to 770 meters - 1.73 times. Well, when shooting at distances in 930 and 1030 meters - in 3,89 times! That is, the result was just great. When firing from such weapons it became quite possible to hit living targets at a distance of a kilometer, which is usually considered a sign of the highest professionalism even among the best shooters.

Alas, by the end of the eighties, when the rifle was fully ready for production, our country was in a difficult situation - the collapse of the Soviet Union was not far off, with the result that the rifle was not put into production.

The only thing that can serve as a consolation, albeit rather weak, is that many technical solutions found during the creation of the VCS were used later. For example, both the folding butt and the slotted flame arrester have found use in the creation of the SVD-S. Tiger-9 (hunting carbine) and Bison-2 (submachine gun) were equipped with exactly the same flame arresters, which proved their superiority.

Alas, the work on the cartridge caliber 6х49 was completely stopped. But many experts, both then and now claim that it was this cartridge that could well become the most suitable sniper for platoon assignment. And I must say that the JMC was far from being the only weapon that could have become a wonderful addition to the Russian arsenal, but it was unfairly forgotten. Many rifles, machine guns, pistols and machine guns, created by Russian gunsmiths, had the right to be used in the modern army, but were forgotten for completely unconvincing reasons.

Ctrl Enter
Noticed oshЫbku Highlight text and press. Ctrl + Enter
We are
6X49 cartridge and SVK, SVK-S, TKB-0145K sniper riflesWhat is good for a Russian is death for a German
29 comments
Information
Dear reader, to leave comments on the publication, you must to register.