Sudden verification of the readiness of the CSTO CSTO 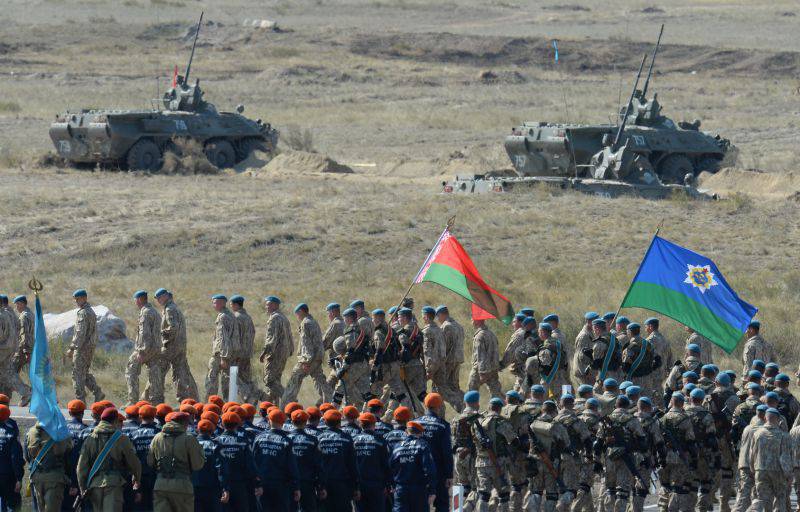 In accordance with existing international agreements, the CSTO CRRF consists of units of the armed forces of Russia, Armenia, Belarus, Kazakhstan, Kyrgyzstan, and Tajikistan. In addition, it was reported on the participation in the CRRF of certain structures from the composition of the Ministry of Internal Affairs and the Ministry of Emergency Situations of the CSTO countries. All units that are part of the Collective Rapid Reaction Forces, were to take part in a surprise check of combat readiness and demonstrate their skills and capabilities.

According to the audit and the domestic press, the CSTO CRRF maneuvers were supposed to take place from May 12 to 20. In total, it was planned to attract about 2 thousand military personnel and several hundred units of various military equipment. Perform combat training missions should have been both ground units, and aviation air force.

One of the first to report about the beginning of their participation in a surprise check was the armed forces of the Republic of Belarus. On the morning of May 12, the Belarusian Defense Ministry announced its participation in the inspection. During the training events, the Belarusian armed forces were supposed to represent about 100 servicemen and about 15 units of equipment. They had to go to the specified landfills and there begin to perform the tasks.

On the same day, the units of the Russian Airborne Forces, which are part of the CSTO CSTO RRF, were alerted. The 98-I Guards Airborne Division (Ivanovo) and the 31-I Guards Air Assault Brigade (Ulyanovsk), having received an order, prepared for the march and began to advance to the airfields, from which they were to go to the specified landfills. Further instructions were planned to be issued after the arrival of the formations in the area of ​​the combat training tasks.

As during the sudden inspections, organized by the Russian Ministry of Defense, the airborne formations began to perform combat training tasks already at the stage of advancement to the airfields. Seizing the opportunity, the fighters of the airborne troops worked out questions of guarding the troops on the march and countering the sabotage groups of the conditional enemy. By May 13, both airborne units of Russia reached the specified airfields and started loading onto military transport aircraft.

On the morning of May 13 (Moscow time), the first reports appeared about the arrival of the CSTO CRRF units at landfills in Tajikistan. Commenting on these newsThe head of the press service of the Ministry of Defense of the Republic of Tajikistan, Faridun Makhmadaliyev, said that one of the main goals of the current maneuvers is to clarify the time required for the transfer of CRRF troops from their bases in the Central Asian states. In addition, the military will have to explore the terrain and its features.

According to F. Makhmadaliev, after arriving at Tajik airfields, the troops of the allied states must make marches to landfills using standard equipment and having standard weapons with ammunition. Upon arrival at these sites, it was necessary to prepare for the next phase of the inspection.

In the afternoon of May 13, the Russian Defense Ministry published information about Russian participation in a surprise check. The press service of the Russian military department reported that several units of the Ivanovo and Ulyanovsk formations of the airborne troops, totaling about 500, took part in the maneuvers. Personnel had 60 units of various types of equipment.

Russian paratroopers were delivered by military transport aviation to the airfield of the city of Dushanbe. From there, they should have gone to the Harbmaidon training ground, having made a march longer than 200 km.

The transfer of the Russian military to Tajikistan was to be carried out by two types of military transport aircraft. The X-NUMX Il-18 aircraft and one An-76 Ruslan were attracted to take part in a surprise inspection. In total, 124 flights were planned, during which people and equipment were to be transported. Other countries participating in the CSTO RRF also used various military transport aircraft. It was reported that during the 30 environment in May, 13 sorties were flown.

On the night of Thursday, 14 May ended with the transfer of the aviation group of the armed forces of Russia, which was to take part in a surprise check. From the Kant airbase, two Su-25 attack aircraft and two Su-24 bomber flew over to Dushanbe airfield. In addition, several military and multipurpose Mi-24 and Mi-8 helicopters were delivered by military transport aircraft in Dushanbe.

The transfer of Russian airborne units ended on May 14. The fighters of the Ulyanovsk and Ivanovo formations unloaded at the airfield of Dushanbe and began preparations for the march. They had to overcome more than 200 km along mountain roads and passes. During the march, it was supposed to work out the issues of protecting the troops on the march from sabotage groups of a conditional opponent.

Also on Thursday there were reports of the arrival of the Belarusian military in Tajikistan. In the course of the maneuvers, the Republic of Belarus was to be represented by military personnel of a reinforced mobile company of the 103 Guards Separate Mobile Brigade of Special Operations Forces. Arriving in Dushanbe, they, like their colleagues, went to the landfills of Tajikistan.

On the morning of May 15, Russian paratroopers received an order to advance to the Kharbmaidon training ground. Around 500, Russian airborne troops had a variety of military and special equipment. In the course of a sudden verification of combat readiness, they were supposed to use the BMD-2Ku airborne combat vehicles, Xonum-Xnumx Nona self-propelled artillery, as well as various other equipment, including special ATVs. Reports of the arrival of Russian paratroopers at the site and the beginning of the deployment of the field camp appeared on the morning of May 2.

The first stage of a surprise test of the Collective Security Treaty Organization Collective Rapid Reaction Forces ended on Saturday 16 May. The main goal of the first stage was to transfer all units involved in the maneuvers to the Tajik polygons. Commenting on the course of the check, CSTO Secretary General Nikolai Bordyuzha noted good preparation of all the units involved. On Saturday, the CSTO Joint Staff Task Force and the organization’s Secretary General conducted an inspection of the troops at the test site.

In the afternoon of May 16, a solemn ceremony of handing over the command of all the troops involved in the inspection to the command of the CORF took place. This structure was headed by Major General Mirali Rakhmatov. After the commemorative event, the command of the Collective Rapid Reaction Forces began the formulation of combat training tasks for various units.

On Sunday, updated data on the number of personnel and equipment involved in the surprise check of the CSTO RRF appeared. According to RIA Novosti, at this point more than 2500 military personnel, about 200 units of ground military equipment and weapons, about 20 combat aircraft and helicopters, as well as 30 military transport aircraft were involved in the activities.

On Saturday and Sunday, the divisions of the CORF were engaged in working out the interaction, checked equipment and weapons, and also conducted training firing. All these events were held in anticipation of the start of the active phase of the audit, scheduled for Monday.

In the morning of March 18, an active phase of a sudden test started. According to the legend of the maneuvers, the forces of the KSOR should have counteracted a conventional enemy: illegal armed formations. An important feature of the test was work in the mountainous terrain, which could make it difficult to perform certain tasks.

The active verification phase began after the reconnaissance of the Russian Airborne Forces, equipped with quad bikes and having the necessary weapons, discovered the grouping of a conditional enemy at a considerable distance from the KFOR troops. In order not to lose time and prevent the conditional opponent from regrouping, the RRF command decided to launch an air strike. For attack purposes with the help of unguided rockets, Russian Su-25CM attack aircraft were raised in alarm.

Soon began the preparation of Russian amphibious units, which were to land in the specified area and continue the fight with the conditional enemy. It was noted that the airborne unit for the first time had to perform mass landing with the use of special-purpose parachute systems "Crossbow" in a complex mountainous area. An unfamiliar locality was chosen as the landing area for the troops.

Aviation, both front-line bombers or helicopters, as well as unmanned aerial vehicles, was involved in the implementation of combat training tasks on Monday. A wide range of tasks were assigned to aviation: attacking a conventional enemy, conducting reconnaissance, transporting and disembarking tactical assault forces, defending convoys on the march, etc.

In accordance with the verification scenario on Monday, the troops of the CSTO CSTO RRF were supposed to work in the conditions of the Harbmaidon training ground and work on counteraction against the conventional enemy. On Tuesday, it was planned to work out combat reconciliation with live firing.

The head of the press service of the Ministry of Defense of Tajikistan, F. Makhmadaliev, on Monday reported that the Collective Rapid Reaction Forces had defined their positions on the border with Afghanistan. In the event of an aggravation of the situation on the Tajik-Afghan border, the CORF troops will have to take positions in several directions. During the maneuvers, positions were determined in the directions of Darvaz, Pyanj, Hamadoni and Shahritus.

On Tuesday, 19 May continued training battles as part of the active surprise test phase. On this day, the KSOR troops, with the support of combat aviation, attacked a conditional enemy. Air support was provided by Russian Su-25 aircraft and Mi-24 helicopters. The cover of the strike aviation group was carried out by Su-27 fighters of the Kazakh Air Force. In addition, the landing of tactical assault forces took place, for which multi-purpose Mi-8 helicopters were used.

Also on Tuesday, some details of the maneuver legend were revealed. According to their scenario, on the border of Tajikistan and Afghanistan, the situation aggravated, resulting in a breakthrough of the armed formation in the face of the conditional enemy. The task of the joint CSTO forces was the elimination of such a breakthrough and the destruction of the enemy grouping.

All the main events of the active phase of the sudden test were supposed to end on May 19. 20 May is scheduled to begin returning troops to permanent bases. In addition, a meeting of the CSTO Security Council Secretaries Committee was scheduled for Wednesday. The meeting will focus on security issues of the CSTO countries. Also at the meeting should be raised questions of the interaction of the troops of the CORF and the results of a sudden check.

Over the past few years, the Russian Ministry of Defense regularly conducts surprise checks of combat readiness, which allow us to establish the actual state of the troops and their capabilities. A few months ago it was said about the possible commencement of such inspections within the framework of the Collective Security Treaty Organization. The first such event, which involves units of the Collective Rapid Reaction Forces, began on May 12. In the near future, the military departments of the CSTO member states should analyze the results of the inspection and draw the necessary conclusions. If the practice of conducting surprise inspections by the CSTO RRF is successful, then such events will be held regularly.