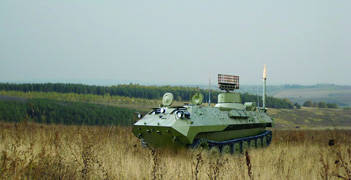 In recent times, all military conflicts took place in approximately the same pattern. First, the enemy’s area was explored in order to identify the main targets for striking. An air strike was struck, first of all systems and air defense systems were destroyed. After the suppression of air defense destroyed the main objects of the enemy.


The main objects of the first strike were anti-aircraft complexes and controls, radar stations, which practically did not change their location from the moment they were put into operation.

After analyzing the modern military conflicts, the Russian military experts concluded that what is required of modern automation equipment for controlling air defense systems:
- high mobility;
- ease of operation;
- management of different types of air defense systems;
- The maximum speed of the calculation tools;
- efficiency of the whole complex;
- the ability to perform a variety of tasks.
Based on these requirements, a set of automation equipment Barnaul-T, produced at the Smolensk-Izmeritel enterprise, was developed and adopted.
The pilot operation of the Barnaul-T KSA has been carried out since 2008, it has been used in various activities of daily activities and combat training as part of a motorized rifle brigade.

KSA took part in exercises with live firing of anti-aircraft missile systems, the experience of using KSA Barnaul-T in combat exercises and combat duties was constantly analyzed and collected in databases, on the basis of which they made improvements and corrections to KSA.

At this time, KSA "Barnaul-T" passed all the experimental tests and went into mass production, planned deliveries to the Armed Forces are being made. Based on the existing system of control of air defense systems, the Barnaul-T KSA is supplied as a set of universal control units. The blocks fit quite easily into the control systems of the anti-aircraft missile systems of the air defense of the Russian Federation.
Since 2009, single supplies of KSA to the Armed Forces have been started, while 25 sets of controls will go into service in November 2011.

On the main tasks - the time of setting tasks for combat calculations, the conjugacy of control modules, the solution of design and operational-tactical tasks, the number of processed air objects - KSA "Barnaul-T" is not inferior to Western counterparts.
The composition of the KSA "Barnaul-T" motorized rifle brigade:

The mobile module of the anti-aircraft gunner is packed in a vest and consists of a battery pack, a signal processing unit, a data receiving-transmitting unit, a controller, a satellite navigation receiver and a radio station. Through the satellite navigation unit, the anti-aircraft gunner determines his location, which is automatically transmitted to the command and control center.

The modules of the Barnaul-T automation equipment kit are easily interfaced with the modules installed at the air defense control points or completely replace them in regular use. Due to such universal properties, the replacement of outdated control modules with new modules of the KSA “Barnaul-T” takes place according to the plan of organizational-staff measures.

KSA "Barnaul-T" can be used not only in the Ground Forces; having the ability to overcome water obstacles, it can be used in air defense complexes of the marines, the tests of KSA for the Airborne Forces end with the possibility of landing KSA modules by parachute method.
The KSA modules themselves can be placed on any means and chassis, the KSA programs make it possible to control not only air defense assets.

KSA Barnaul-T is an open and rapidly developing system. Due to its universal compatibility with outdated modules, it has a high potential for further modernization. Constantly carried out to expand the range of weapons, ready to work with KSA "Barnaul-T".

The developer of OAO NPP Rubin and the manufacturer of OAO Izmeritel have great potential for increasing the performance characteristics of an automation kit. And with constant funding of the project in the next ten years, all air defense forces will be provided with modern automation tools to effectively repel enemy air attacks.

We are in Yandex Zen
American anti-aircraft defense during the Second World War. Part 1
Universal anti-aircraft missile system C-300В
3 comments
Information
Dear reader, to leave comments on the publication, you must to register.