Unusual tanks of Russia and the USSR. "Rover" Porokhovshchikova 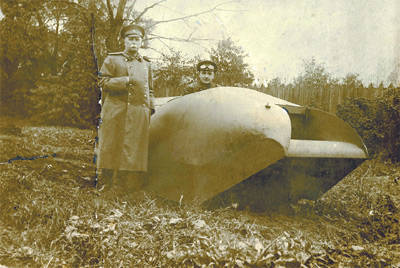 September 15, 1916 is considered the first day of use. tanks in battle. And many would be interested to know what they were, these first tanks. Like who, they were created. Today I will tell you about the first in stories tank design tank, or rather its prototype, sample and its creator Alexander Alexandrovich Porokhovshchikov (1893 - 1942).


A. A. Porokhovschikov from childhood showed an interest in inventing, few people know that in addition to the well-known “Rover”, he was involved in inventing airplanes, one of his monoplan models shown in 1909 was praised by N. Ye. Zhukovsky, he was also invented and The Bi-Kok two-body reconnaissance aircraft was built and tested in 1914, a training, two-seater P-1917, was created in 4, in the period from 1920 to 1923, P-4 bis, P-4 2 bis, P-5 and P-5 bis. They were launched into a series; many Soviet pilots, aces heroes of the Patriotic War, did not train these aircraft.

In August, X. NUMX, A. Porokhovshchikov appeals to the Special Committee at the Headquarters of the Supreme Commander with the draft of his new invention, and in January provides detailed drawings of the machine. January 1914 gets permission to build a prototype. He is given the necessary funds, equipment, 15 soldiers, artisans and more 25-ti skilled workers and on February 20 he will begin to produce a prototype. A military engineer, Colonel Poklevsky-Kozello was appointed to monitor the progress of the work.

As conceived by the inventor, the design of the Rover was very unusual. The hull was streamlined and designed to be sealed, with an air intake niche in front and multi-layered armor consisting of two steel sheets, one of which was cemented and a pad of pressed sea grass between them, the armor was also an invention by A. Porokhovshchikova ahead of its time . It should be noted that tanks with spaced booking appeared only in the second half of the last century. When fired from a distance of 50 meters, it withstood a bullet fired from both a rifle and a machine gun. The welded frame was supported by a single track mover, the caterpillar of which was stretched over four drums, the rear drum was the leading one and was driven by a strong engine through a propeller shaft and gearbox. Combat weight was four tons. To prevent the tracks from moving, grooves were cut on the drums, but with the possibility of longitudinal slipping, the problem was not completely solved. The rotation of the machine was carried out with the help of two swivel wheels placed on the sides of the machine. On hard ground, the car moved on the rear drum and side wheels, and on loose soil had to lie on a wide track. When driving on loose soil, the swivel wheels should, according to the inventor, play the role of the rudders of the type of aircraft wing, but in practice they only interfered with the movement, here the laws of motion in the air, which A. Porokhovshchikov knew perfectly well, did not fit, the turning attempt led to imminent breakdown. May 10 "Rover" out of the workshop gates to test on the movement on solid ground. During which he showed good speed for that time, with the tracked 18 km per hour. The transition to the wheeled movement was not made. At that time, a rotating turret and armament were not installed on the “Rover”, according to the plan, the armament of the vehicle was to consist of one 25 mm Maxim machine gun. The official demonstration was scheduled for July 7,62 and took place in the regimental yard, where the car had already shown a higher speed, but unfortunately this was the only advantage. The machine did not meet the expectations of A. A. Porokhovshchikov and was sent for revision during which it was not possible to correct all the identified deficiencies. Last 20 tests were performed on December 26 of the year.

There were still many shortcomings and omissions in the presented sample. The most significant drawback was the turning mechanism, its poor functionality, the driver had to turn the car manually using a pole. The design of the undercarriage was found to be unsatisfactory, and it was not possible to make it airtight due to the characteristics of the undercarriage. The placement of the crew inside the car was extremely inconvenient, due to the very small internal space. It was decided to refuse further work on this machine, the War Department obliged A. A. Porokhovshchikov to return the money allocated for the construction, and send the sample to the GVTU. This is the story of the creation of the world's first tank, albeit not successful and not accepted for service. However, he laid the foundation for Russian and Soviet tank building in the same way that the bot of Peter the Great laid the foundation for the mighty Russian the fleet. Following it there will be many projects, successful and not successful, and each of them will have its own story.

Ctrl Enter
Noticed oshЫbku Highlight text and press. Ctrl + Enter
We are
Experimental armored car A.A. PorokhovshchikovaOnce again to the question of the "Porokhovshchikov tank"
11 comments
Information
Dear reader, to leave comments on the publication, you must to register.