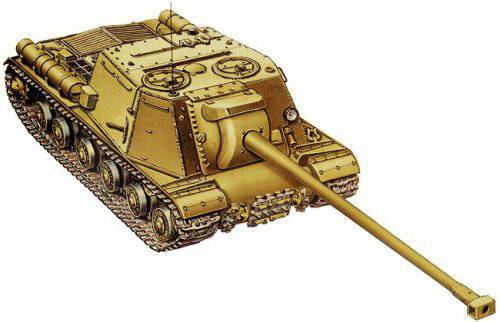 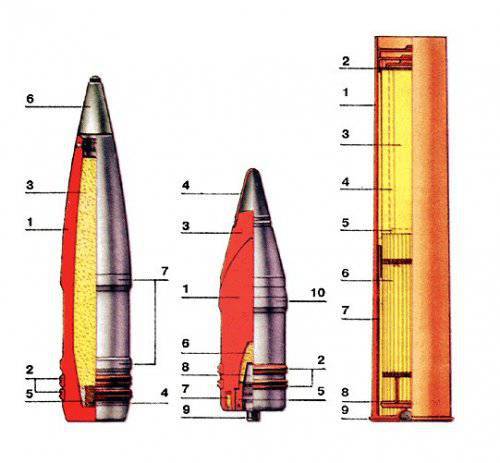 After the battle in the summer of 1943 on the Kursk, in which the Germans used new and improved models of armored vehicles, the Red Army needed Tanks and self-propelled artillery mounts that could fight them. Recall that the reservation of the frontal part of the hull and the felling of tank destroyers "Elephant" reached 250 mm, and the "Tigers" - 110 mm. In addition, self-propelled guns had to support “advancing infantry, motorized and tank units with fire and caterpillars,” including during the assault on settlements and the breakthrough of fortifications. Consequently, the new machines had to increase the firing range (including from closed positions), the initial velocity of the shells. And for this it was necessary to increase the mass of the charge and the pressure of the powder gases in the bore. 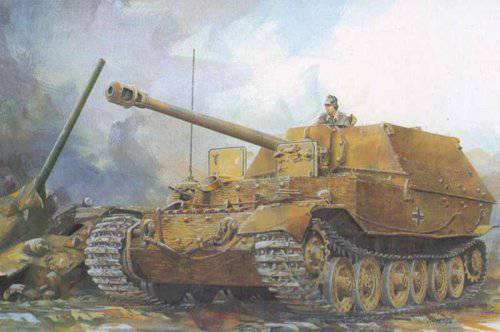 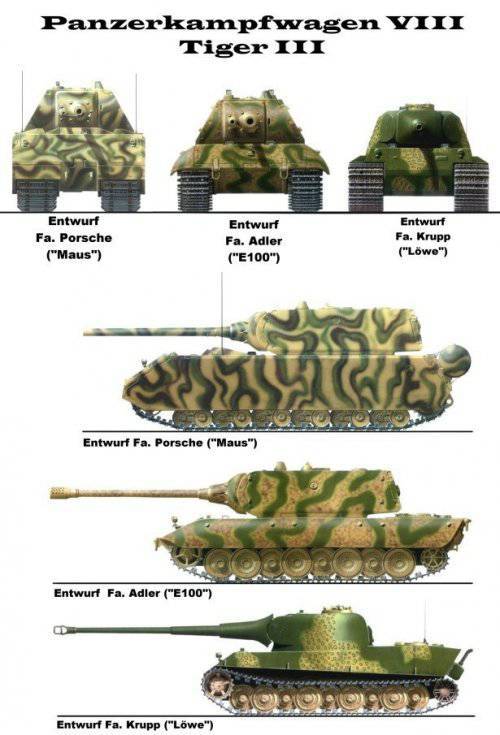 Self-propelled guns with high-power cannons (BM) on a competitive basis were designed at the Uralmash design bureau 9, the Central Artillery Design Bureau (CACB), the Transmash Central Design Bureau, at the Design Bureau of Plant No. 172. It was decided to borrow the undercarriage, transmission and engine from the heavy tank EC-1, on the basis of which in 1943 there were already created two variants of the IMS-122 - with the A-19 gun of the 1931-1937 model. with a barrel length 46,3 caliber and D-25T with a barrel length 47 caliber. The shells fired from them had an initial speed of 800 m / s, which was considered insufficient for new requirements. All developers submitted their samples in 1944 and at the beginning of 1945.

Thus, in the Central Artillery Design Bureau, under the direction of VG Grabin, the ISU-122BM and ISU-130 were prepared. In both machines, the guns were housed in a cast frame in the front part of the fixed felling, with the same bolts and recoil devices. Understandably, the artillery systems themselves had inherent features.

The gun 122BM barrel, length 59,5 calibers, was with 1,5-percent cutting and screw-up breech. Under the barrel there was a hydraulic recoil brake and a hydropneumatic knurler. Later, such a layout was recognized not very successful, since the height of the line of fire increased, which negatively affected the stability of the self-propelled gun when firing full charges. The shutter was wedge, horizontal, with semiautomatic copier type.

After the shot and ejection of the liner, the barrel was blown with compressed air stored in the cylinder. When firing from closed positions, the gunner used the ZIS-3 panoramic sight, while direct aiming he used a telescopic CT-10.

The lifting mechanism of the 122BM gun was of a sector type and provided the elevation angles of the barrel from minus 1 to plus 14 degrees, the rotary mechanism of the screw type - horizontal guidance along 5 degrees in both directions.

The ammunition consisted of 25 high-explosive fragmentation and armor-piercing rounds of separate loading with 25 kg shells, which had an initial speed of 1000 m / s, and the firing range reached 9800 m.

In the frame, the ISU-130 armored vehicle mounted the rocking part of the X-NUMX-mm B-130 naval cannon, which was equipped with a muzzle brake to reduce rollback. The horizontal alignment angles were increased by the degree, height of the 13 caliber, plus minus 54,7 to plus 2. ISU-15 could hit targets at a distance 130 m from the firing position.

30 June - 4 August 1945, both self-propelled guns passed ground tests, which revealed their shortcomings. These included the unsatisfactory accuracy of armor-piercing projectiles hit the targets (therefore, in a combat situation, into enemy tanks) and excessive scattering of high-explosive when firing over the squares. Customers were not satisfied with the rate of fire of the 2 shot per minute and the stability of the machine when fired, and the angles of horizontal and vertical pickup were considered small. Consequently, ISU-122BM and ISU-130 needed to be improved, but in September 1945 ended the Second World War, they hadn’t thought about the “cold” yet, and it was considered inexpedient to improve both machines.

Simultaneously with them, in 1944, in OKB-172, they developed their own version of a high-powered self-propelled gun based on JSU-122. To do this, X-NUMX-mm BL-122 cannon with a barrel length 9 of calibers, which in ballistics exceeded A-59 and was close to the Grabinsky 19B, was placed in a closed wheelhouse. 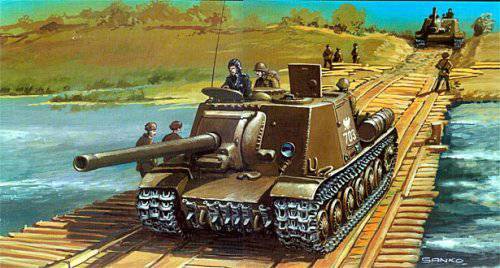 In May, plant No. 172 prepared the undercarriage; in June, the artillery system was mounted on it. The trunk of the BL-9 was monoblock, the bolt was wedge, horizontal, semi-automatic. The ammunition had 24 high-explosive fragmentation and armor-piercing-tracer shots of separate loading with 25-kilogram projectiles, which had an initial speed of 1100 m / s and hit the enemy at a distance of 10700 m. The squad kept 12,7 ammo for it.

This machine was given the designation JSU-122-1, in September 1944, it was subjected to field testing, and in May 1945, after the elimination of some shortcomings, and the state one. Since the Great Patriotic War had ended by that time, it was not accepted for service.

In the same OKB-172 in the self-propelled armored cushion placed a swinging part of the anti-tank gun BL-20, which had the same ballistics as the BL-9. The elevation angles of the trunk, 59 lengths of calibers, were from minus 1 to plus 25 degrees, therefore the maximum firing range - 17000 m - exceeded that of 122BM, the angles of horizontal fire increased to 10 degrees on both sides, the rate of firing reached 10 shots per minute

Unlike the previous ones, the self-propelled gun was conceived on the basis of the medium tank T-34, thereby making it easier to 33,1 t and increasing speed and maneuverability. However, they were late here as well - by the end of the war they managed to prepare only a technical project, and it did not come to its realization.

In 1944, two more high-power self-propelled guns, equipped with X-NUMX-mm D-122 guns, were made on the chassis of the modernized T-25-34 tank. And they came out easier self-propelled guns, designed on the basis of EC-85, their weight did not exceed 1 t, but the speed reached 31,5 km / h. And these installations did not have time to go to war, and work on them also remained unfinished.

Self-propelled artillery installations of similar power were engaged in the OKB-9 under the supervision of F.F. Petrov. There they plotted a powerful anti-tank system based on the serial SU-100, also made on the “thirty-four” chassis, with the X-NUMX-mm D-85 gun.

Its barrel, 58,4 long in caliber, was composite and included a smooth front-wall pipe (choke), 1136 mm in length and 87,8 mm in diameter, and a rifled back. The gun received a semi-automatic, wedge, horizontal shutter, which provides the maximum rate of fire to 10 rounds per minute. D-10 had a hydraulic brake of recoil and the same nádnik, whose cylinders after the shot went off with the barrel. The sectorial lifting mechanism (from minus 2 to plus 17 degrees) and the helical rotary (by 8 degrees aboard) were of push-pull type. For shooting from closed positions on the 13200 m served as a panoramic sight, with direct aiming - telescopic TSH-15. The ammunition was 28 high-explosive and armor-piercing rounds with shells 9,5 and 9,4 kg, which had initial speeds in 1030 and 1050 m / s. The front part of the liner from the more powerful shot of the 100-mm gun was crimped under the bottom of the 85-mm projectile from the anti-aircraft gun.

From 13 to 26 in January 1945, this self-propelled gun, SU-85BM, was presented to the ground tests, the result of which was disappointing - the accuracy of hits with shots on shields and terrain at a distance of 500 and 2000 m was considered unsatisfactory. Acknowledged low and the vitality of the trunk, which was observed increased heights of the cuts and chambers when using enhanced charges. 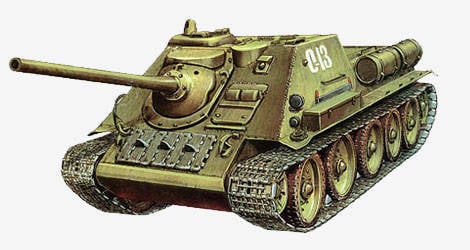 Therefore, the OKB-9 urgently manufactured a new barrel with modified ballistics and deep grooves, and the D-10-85А index was assigned to the weapon equipped with it. Now the chamber was squandered under the over-pressed sleeve of the more powerful ammunition for the X-NUMX-mm A-122 cannon. And although the pressure in the barrel has decreased from 19 to 3150 kg / cc, the initial velocity of the armor-piercing projectile weighing 3000 kg has remained very high - 9,4 m / s.

When tested in May-June 1945, self-propelled gun at a distance of 1000 m punched armor plates with a thickness of up to 155 mm. At the same time, this car, as well as its competitors, found all the same flaws - poor stability in firing, low accuracy and low survivability of the trunk.

By the summer of 1945, the Central Aviation Design Bureau of VG Grabin also developed and manufactured the H-3-457 cannon of the same caliber, which had the same ballistics as the D-10-85. Only it was completed without a smooth-bore muzzle nozzle, thanks to which it was possible to significantly increase the service life of the barrel and slightly improve the accuracy of hits, which is especially important when firing at moving targets. But even in this case, further work on high-power self-propelled guns did not consider it necessary to continue, since hostilities in Europe had ceased, and military equipment used by the Red Army was sufficient for the planned operations against Japan.

And soon it was time to start creating self-propelled high-power artillery installations of the new generation. Now, at the disposal of the designers, there was also information verified during the tests about the optimal ratio of charge mass, pressure of powder gases in the barrel, the initial velocity of the projectiles, which was to provide future guns with the necessary combat effectiveness and survivability. The same applied to the running gears - the combat experience and running-in of experimental machines made it possible to identify their positive and negative sides.