"Short Bruno" against the French and the British

April 7 2015
9
When the First World War began, it turned out that Germany had neither heavy nor super heavy long-range artillery, although their "Big Bert" was out of competition on the battlefield. But what is 16 km range compared to 32 km for a similar caliber in the sea navy? Meanwhile, there were many guns that did not suit sailors, but were quite suitable for operations on land. The problem was how to move them to where they were needed, as they were often very large and bulky.


The easiest way to solve the problem was the creation of stationary artillery installations, similar to those that England, Austria-Hungary and Russia had. During 1915, the number of 21-, 24-, 35,5- and 38-cm ship guns reached an impressive amount. Only this kind of installation had a serious drawback - a complete lack of mobility. If the front was approaching, they often simply could not fire on the enemy and were forced to flank fire, not to mention the fact that in this case there was a threat of their capture. And in addition, moving one of these giants could take several weeks of hard work. The best solution, of course, was to put these very heavy tools on the railway line, which had already been tested in practice in France. 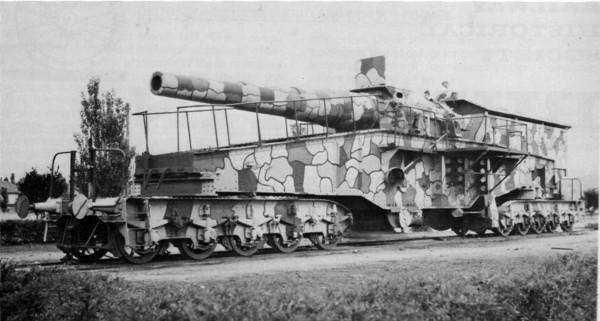 "Short Bruno" on the firing line

The first E-guns (Eisenbahngeschütze, i.e. rail guns) that hit the front in 1916, were 24 cm L / 30 caliber guns (Theodore Otto, 18,7 km long range) and 24 cm L / 40 (Theodore Karl ", 25,5 km range). They were soon appreciated as a powerful and very mobile means of warfare, especially in those cases when it was necessary to withstand the sudden attacks of the enemy. In other cases, the main targets of these guns were batteries of enemy long-range guns, railway stations, depots, roads and supply centers, field airfields and large concentrations of troops. 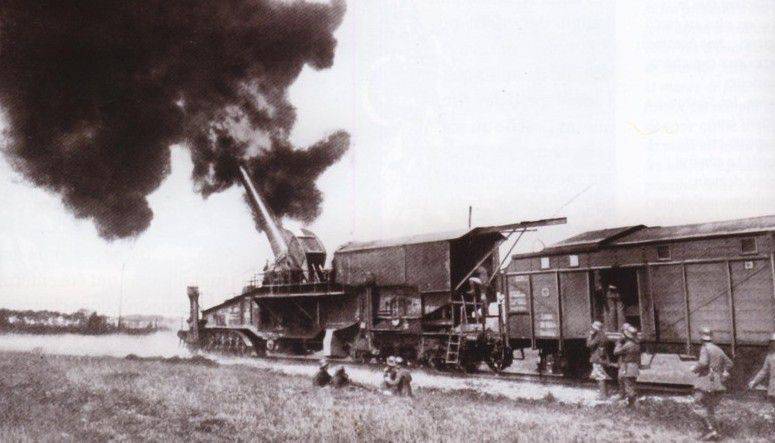 And this is how this monster shot!

Of course, they had their flaws. Due to the fact that they could only shoot along the traverse, they almost always had to be placed on a curved branch or they could build additional branches with a certain radius of curvature. In 1917, the guns were placed on special turntables that could be deployed on the 360 °. The new guns were called EB-guns (Eisenbahn-Bettungsgeschütze) and in the summer of that year they began to be actively used. The first such weapon was the 28 cm L / 40 cannon "Bruno". The version with a slightly modified barrel was called the Elector. In 1918, there were six such guns in service. The combat weight of each such gun was 156 t. These guns were originally installed on board the battleship Deutschland. But after the sea of ​​battle of Jutland they were considered obsolete and that they could be used with great success elsewhere. The guidance angles ranged from 0 ° to + 45 °, the angles of horizontal pickup were 8 ° (if an 360-degree rotary table is not used). The firing range of a projectile weighing 302 kg with an initial speed of 740 m / s was 31 km. Like all heavy guns, the barrel had a rather short lifespan (around 850 shots), after which it was required to be replaced. Total 20 guns of this type were put into action. They were used to protect the Belgian coast from possible attacks of the English fleet and the counter-battery struggle. 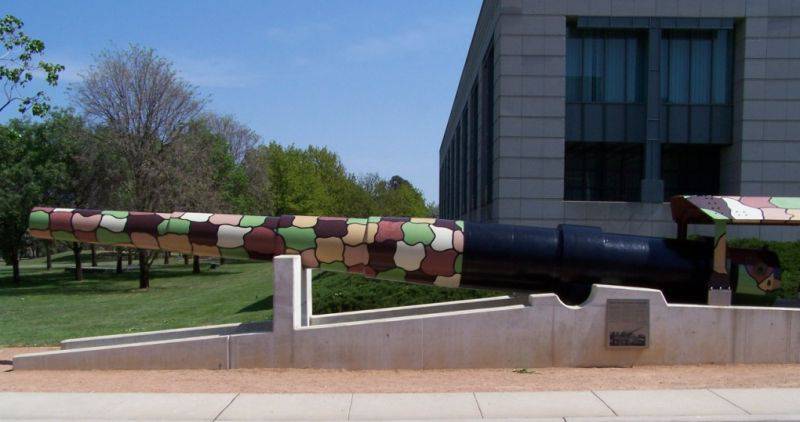 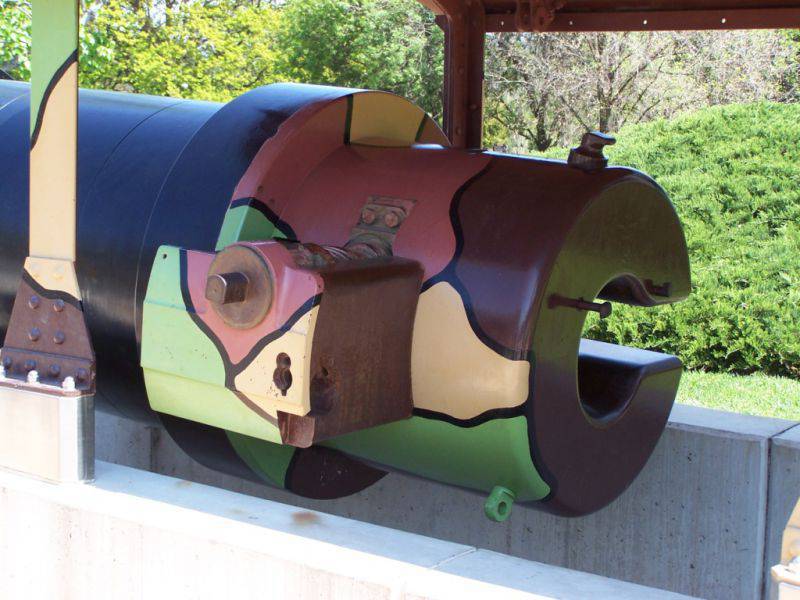 The army received only two guns. Moreover, one of them was captured by the Australian 31 battalion during the famous August 8 offensive of the year 1918. Prior to that, throughout the summer, this gun bombarded Amiens (an important transportation hub) from a distance of more than 20 km. Australians took him to their “Green Continent” and hoisted it in a museum in Canberra. The painting of the gun at first glance seems surprising, but nevertheless it is quite reliable. There are pictures of the war period and instructions for painting it in colors that were made by the meticulous staff of this museum. 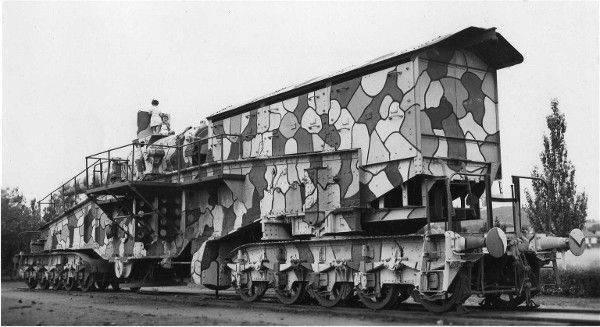 After the war, Belgium also received one of these weapons in reparations. But the Germans managed to hide a certain number of trunks, some of the old batteries in the coastal areas, and also hide a number of platforms on which they could be installed, for which they were disguised as commercial ones. Therefore, when Germany began rearmament in the middle of the 30s, these guns were quickly reassembled at the Krupp plants. One of these guns was the “Short Bruno” (“Short”, as it had an L / 35 trunk and a range of less than thirty kilometers). During the Second World War, this weapon was used against England, and later for firing at Leningrad. So these weapons of destruction, if I may say so, lived a surprisingly long life! 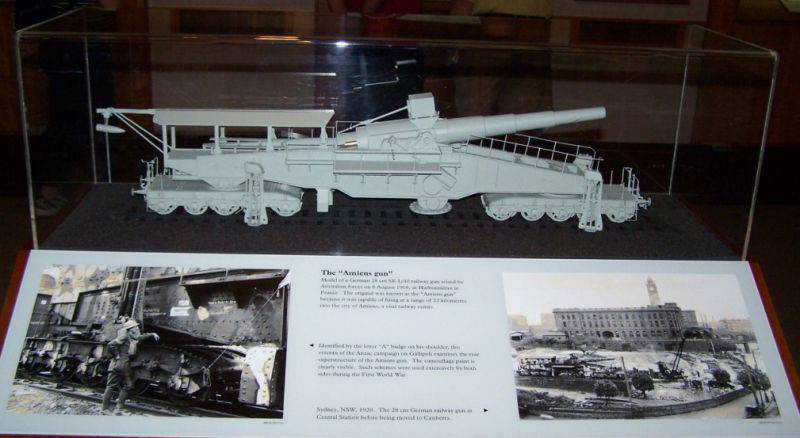 But the French, by the way, had rail guns even before the start of World War I, although they were accused of adherence to a single caliber 75 mm and one shell for all occasions! The main problem with the installation of marine tools on railway transporters was the lack of perfect mechanisms for damping recoil and, among other things, they were very cumbersome. However, one such 305-mm MLE cannon was developed in the 1906 year. The return problem was solved very easily and cheaply. French engineers refused to recoil mechanisms at all! Schneider offered a stem rigidly attached to the carriage that can only move up and down on the trunnions. Under the carriage mounted transverse bars, and along the rails fit longitudinal beams so that these bars fit tightly to them. When fired, the friction force between them quickly absorbed recoil, so that the conveyor itself rolled back a meter or so and no more. It was a rather “raw” system, but it worked, and this allowed the French to build a whole series of heavy railway cannons, which played an important role in their victory over Germany.

305 Mle 1906 had an L / 45,9 barrel of 305 caliber mm. Like most of these guns, it could only be induced in a vertical plane from + 2 ° to + 40 °. At the same time, it could throw an 348-kg grenade with an initial speed of 795 m / s. at maximum range in 27,5 km. The weight of the gun at the combat position was 178 tons. Interestingly, very soon the French tasted and decided to increase the caliber of such artillery systems with such a simple rollback. As a result, they had tools of caliber 320 mm and even 370 mm, which solved the problem of disposing of trunks from old battleships for good use! 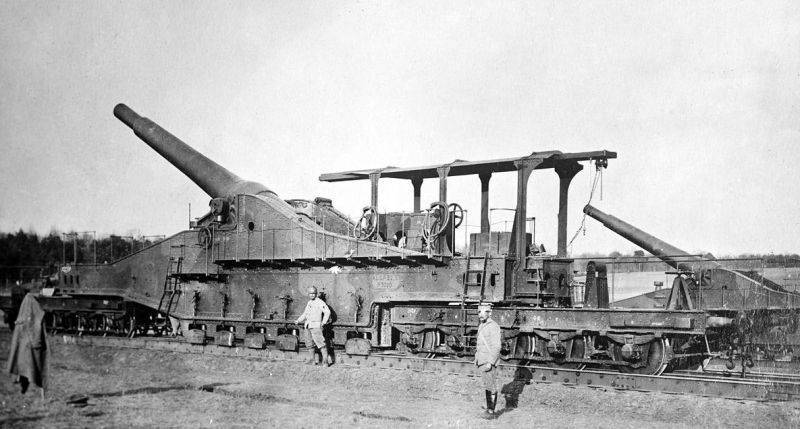 French 320 mm railway gun. Wooden cross-beams under the gun carriage and laid along the rails are clearly visible metal beams for sliding

Accordingly, in England, 305-mm howitzers on railway platforms could be turned in all directions, which made it possible to fire a whole battery of these monster guns from one path and concentrate on the same target! 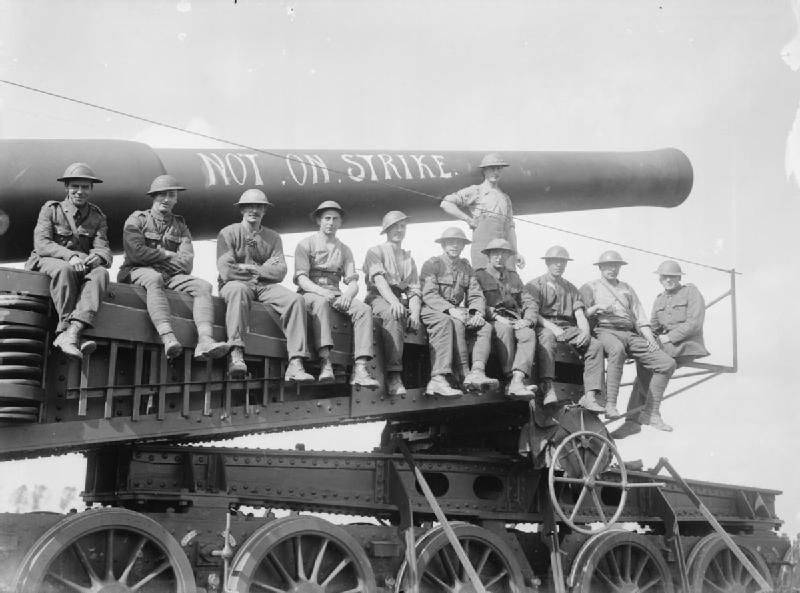 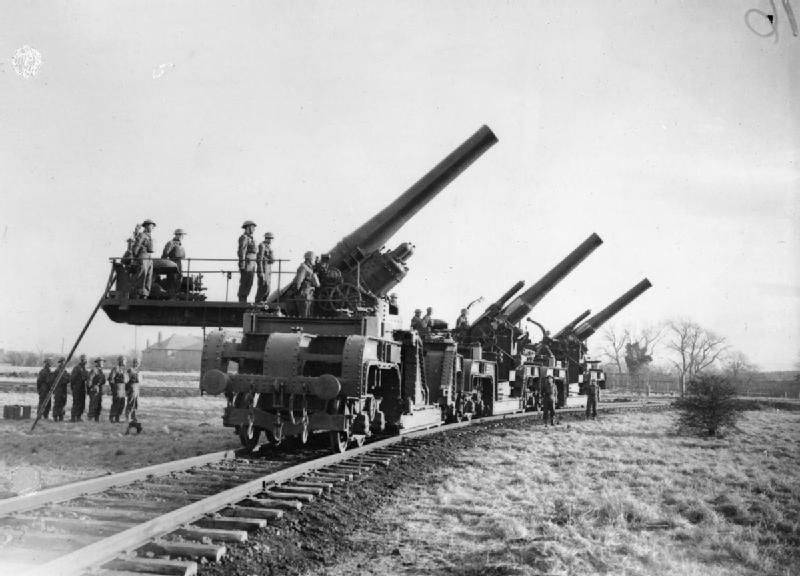 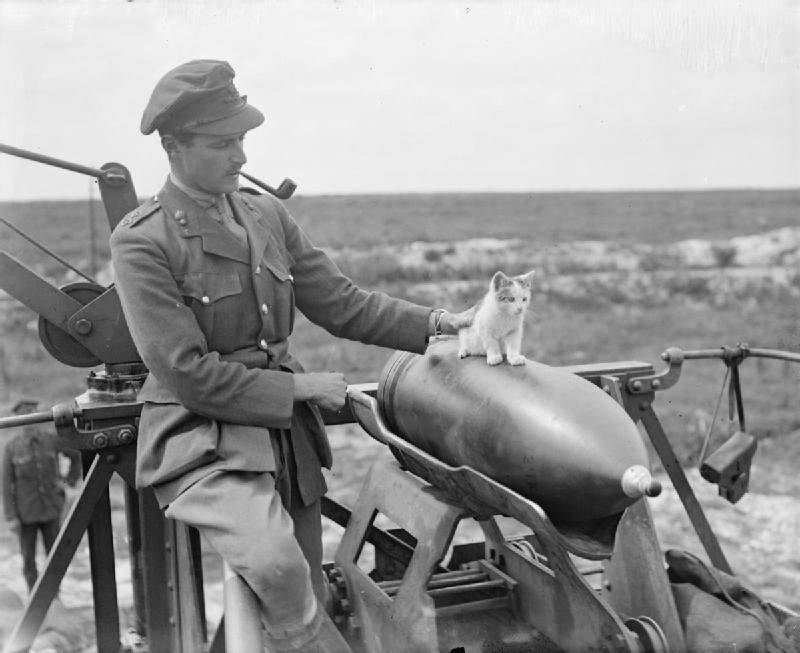 As for the USA, the railway guns were developed there so late that none of them entered Europe before the end of the war, but nevertheless all of them were completed in the 1919 year and then used for many years in parts of the US coastal defense.

Therefore, when they say that the “General Tank” defeated the Germans in the First World War, but the Germans had better instruments, this is true, but only partly true. Both quantitative and qualitative diversity in artillery systems was on the Allied side in the same way, although no one denies that the German army had separate artillery systems very well.