U-UAZ continues to build helicopters and is also preparing to test a new car.

March 30 2015
22
The defense industry continues to fulfill orders of the military department, producing and developing new equipment. The military, in turn, control all work. For example, last week, Deputy Defense Minister Yury Borisov visited several defense enterprises of Siberia and the Far East. There, the official got acquainted with the progress of work and monitored the execution of orders.


On March 24, a delegation of the leadership of the Ministry of Defense visited Ulan-Ude aviation plant (U-UAZ), where several types of helicopters are manufactured. Currently, the company is fulfilling the order of the military department for the construction of multi-purpose helicopters Mi-8AMTSh-V. This machine is another version of the development of the Mi-8 platform, created several decades ago. Despite the long historyThe equipment of the Mi-8 family is still of great interest to customers, including the Russian Ministry of Defense. 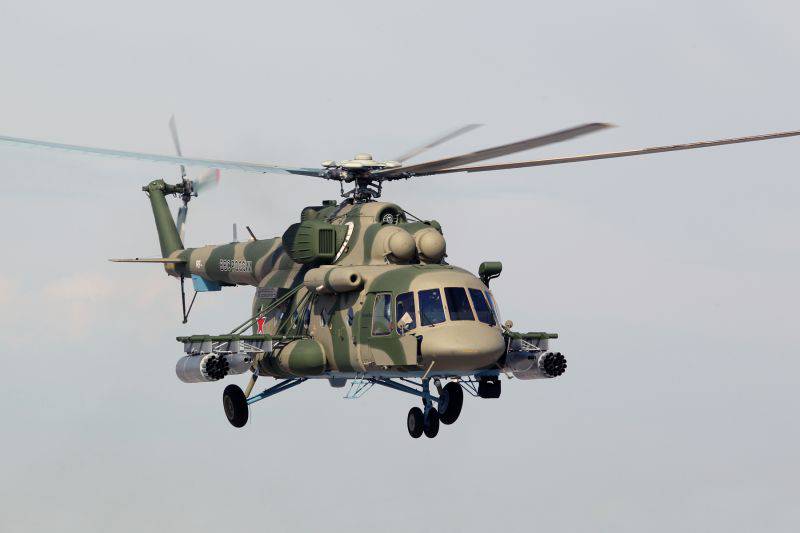 In recent years, the Russian armed forces received several dozen Mi-8AMTSH helicopters and their improved version of the Mi-8AMTSH-V. This technique fully meets expectations. Deputy Minister of Defense Y. Borisov called the latest modifications of the Mi-8 helicopter to be the real workhorses of the Russian armed forces. Production of this equipment will continue, which will allow the armed forces to supply the necessary number of rotary-wing machines, as well as load U-UAZ with orders for a sufficiently long period of time. According to Yu. Borisov, the Ulan-Ude Aviation Plant already has several government orders, which will continue until the end of 2020. In the future, it is planned to place new orders, but it is too early to say what kind of equipment will be ordered and purchased by the military.

Yu. Borisov believes that the modernization potential of the Mi-8 helicopter has not yet been exhausted. For this reason, the Ministry of Defense, the Russian Helicopters holding company and the Ulan-Ude Aviation Plant are working on the further development of this family of vehicles. Various promising modifications, differing from the basic models by characteristics and armament, are being thought out. So, now aircraft manufacturers are working on a project for the modification of the Mi-8AMTSH-B helicopter, designed to work in the Arctic.

The Deputy Minister of Defense recalled that now the Russian armed forces are actively developing the grouping of troops on the northern borders of the country. The construction of new military camps, as well as the deployment of various military facilities. For this reason, the armed forces need vehicles that at any time and under any conditions can accomplish the task. To this end, the holding company "Helicopters of Russia" and the enterprises that are part of it are now engaged in the creation of a new helicopter adapted to work in low temperature conditions.

The basis for the "northern" helicopter, designated Mi-8AMTSH-VA, was the serial Mi-8AMTSH-B. The base helicopter is equipped with turboshaft engines VK-2500-03 and auxiliary power unit TA-14. In addition, the Mi-8AMTSH-B helicopter differs from its predecessors by a set of electronic equipment.

A new modification of the Mi-8AMTSH-VA is created taking into account the operation in the northern regions of the country with a specific climate. For this reason, the new helicopter is designed to ensure reliable operation in low temperature conditions, as well as in poor visibility. Thus, the new "northern" helicopter will have to fly at low temperatures, during the polar night and with the loss of communications or satellite navigation signals.

The development of the Mi-8AMTSH-VA project was completed at the end of last year. In December, the Ulan-Ude Aviation Plant began construction of the first prototype of such a machine. Construction was funded by Russian Helicopters. Without waiting for testing, the Ministry of Defense indicated its desire to acquire new type of equipment. In mid-February, the Ministry of Defense signed a contract with U-UAZ, according to which serial construction of new helicopters will be carried out in the future. The size of the ordered batch of helicopters and its cost were not called. Visiting the plant, Y. Borisov noted that the Russian armed forces needed at least several dozen "northern" Mi-8AMTSH-VA. The maximum number of such equipment can reach hundreds.

After the first experienced helicopter, specialists from Ulan-Ude should build four more cars. The first batch of five helicopters will be used at different stages of testing. On March 24, the delegation of the Ministry of Defense was able to familiarize itself with the first prototype of the new helicopter, which is now in the U-UAZ workshop. In the next few months it is planned to transfer it to the military department.

The approximate test plans for the Mi-8AMTSH-VA were announced back in February of this year. Recall, then the managing director of the Ulan-Ude Aviation Plant Leonid Belykh said that until the end of 2015, the aircraft manufacturers will be engaged in testing the first prototypes, as well as prepare for the serial construction of new helicopters. Preliminary tests are planned for the coming months. The first flight of the new Mi-8AMTSH-VA should take place in the second half of the year. Other plans have not yet been announced.

Earlier it was claimed that the "northern" Mi-8AMTSH-VA helicopter could be built not only in the interests of the armed forces. This machine is designed to equip army aviation with modern equipment designed to work in a specific arctic climate. Nevertheless, such helicopters are needed not only by the armed forces, but also by various civil or commercial structures. Some departments and companies that operate in remote northern areas could replenish their fleet with new machines that have high performance and are adapted to work in difficult conditions. First of all, these are companies in the mining industry, whose facilities are located in Siberia or the Arctic.

Flight tests of the first Mi-8AMTSH-VA helicopter will begin in the second half of the 2015 year. It will take some time to carry out all the necessary work, after which a new technique can be put into service and launched into a series. At the same time, U-UAZ plans to prepare for the serial construction of helicopters in the near future. Thus, it is possible to expect that the first serial "northern" helicopters of the new type will be handed over to the troops next year. As a result, the armed forces will be able to replenish their helicopter fleet with modern technology with special capabilities, and the Ulan-Ude plant will receive another large order that can improve the condition of the enterprise.