March 30 2015
40
Last summer, it was reported that, already in 2015, strategic rocket forces would begin to receive a new intercontinental ballistic missile, which is intended to replace existing weapons with an expiring service life. As a replacement for some aging missiles, the Fronteer RS-26 complex is proposed. The other day there were new reports on the progress of this project. 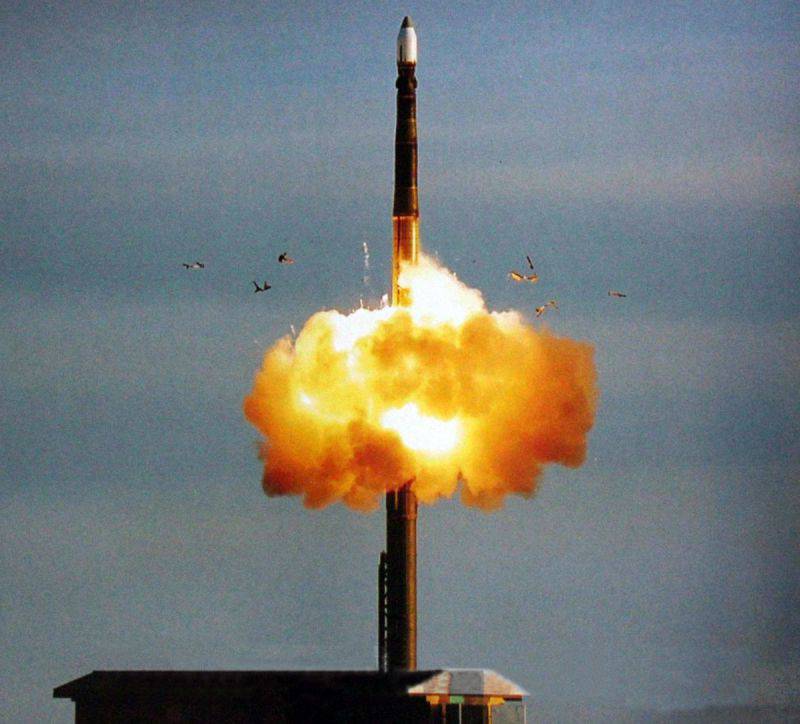 26 March edition of Kommersant, citing its sources in the Ministry of Defense announced the completion of tests of the new ICBM. Over the past few years, the military and specialists of the Moscow Institute of Thermal Engineering (MIT), which developed the PC-26 project, conducted four test launches of the new rocket. The last test run took place just a few days ago - March 18. The recent launch was considered successful and became the fourth in a series of successful tests. The rocket launched from a mobile launcher at the Kapustin Yar test site and hit an educational target at the Sary-Shagan test site. All the stages of the launch and flight of the rocket, according to the source of the Kommersant publication, went through regularly. The correct operation of all systems, components and assemblies is confirmed by the received telemetry.

The fourth successful test launch in a row opens the way to the troops for the new missile complex. According to an unnamed source in the Ministry of Defense, the military is ready to adopt a new missile. Deliveries of serial products and their deployment in the combat units of the Strategic Missile Forces should begin as early as next year. Thus, in the next few months, the Russian strategic rocket forces will begin implementing a new program to upgrade their weapons.

Unfortunately, the data on the new test launch of the Rubezh missile, as well as its imminent adoption, is not yet confirmed by officials. According to Kommersant, the press service of the military department and representatives of the Moscow Institute of Heating Engineers refused to comment on such news. Perhaps the first official information about the successful completion of the development and testing of the “Rubezh” ICBM will appear in the very near future, but so far it is necessary to rely only on unnamed media sources.

According to reports, the development of the PC-26 rocket complex "Frontier" was launched no later than the middle of the last decade. During the first years the project was classified and its existence was not announced. The first mention of the new rocket took place in an interview with MIT General Designer Yuri Solomonov, published in March 2011. At the same time it was reported that in the near future the first test launch of the new product should take place, and the project development is scheduled to be completed on the 2013 year. Previously, in parallel with the name "Frontier", the designation "Avant-garde" was encountered, but by now the latter has fallen into disuse.

The first launch of the rocket took place on September 27 2011, at the Plesetsk test site. These tests ended in failure - an experienced rocket fell in 8 km from the launcher. According to some data, during the exit from the transport and launch container, the rocket damaged the first stage; according to others, it was not a full-fledged launch, but throwing tests to test the missile launch systems. The first full launch took place only 23 May 2012 of the year. The rocket, which took off from the Plesetsk test site, successfully delivered the training unit to the Kamchatka test site. The third launch (October 24 2012 of the year) was held at the new site, which was the Kapustin Yar test site. To date, with the first unsuccessful, five test launches have been conducted, the last of which took place on March 18. 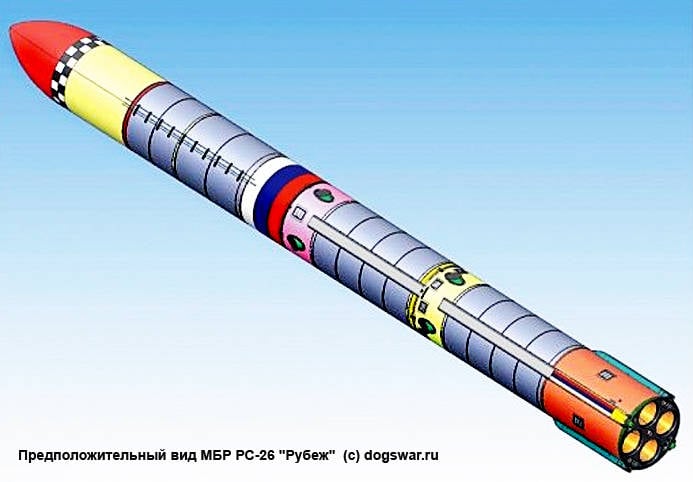 According to the available fragmentary data, the Rubezh missile system will be used with mobile launchers. In addition, some sources mention the possibility of mine-based. Accurate information about the architecture of the rocket and the composition of the equipment used is not yet available, because of which it is necessary to make various assumptions based on information about other projects and a common sense.

Probably, the PC-26 rocket has a three-stage layout and is equipped with solid-fuel engines. The starting weight of the product is estimated at 40-50 t. According to various estimates, the maximum range of the Rubezh missile must be at least 6-8 thousand km. Given the need to replace existing weapons, we can talk about large values ​​of this parameter. The combat equipment, apparently, should be made in the form of a split head part with individual guidance.

The launches of the Rubezh experimental missiles from the Kapustin Yar proving ground at targets at the Sary-Shagan proving ground became a pretext for claims from foreign countries. The fact is that the distance between these polygons is much less than 5500 km, which are the conditional boundary between medium-range missiles and intercontinental missiles. Thus, the PC-26 project began to be accused of inconsistency with the existing Medium and Small-Range Missile Treaty, according to which Russia and the United States are not entitled to develop, produce and operate ballistic missiles with a range from 500 to 5500 km.

Nevertheless, the Rubezh rocket confirmed the possibility of flying an intercontinental range. It is developed and planned for use just as an ICBM. In addition, it is in this quality that a new product is declared in existing international agreements. Thus, all claims are contrived and should not entail any consequences of a political nature.

Currently, several types of missile complexes are in service with the Strategic Missile Forces: these are the systems of the Р-36М family, the UR-100UTTX, RT-2М Topol, RT-2ПМ2 “Topol-M” missiles in mine and mobile design, as well as mobile complexes RS -24 Yars. The new complex PC-26 "Frontier" is designed to complement the latest system of the Strategic Missile Forces, as well as gradually replace obsolete missiles with similar characteristics. Probably, over time, "Boundary" will replace the "Topol" complexes. The start of shipments and combat duty of PC-26 missiles is scheduled for 2016 year.