March 24 2015
45
Currently, the Russian submarine fleet is experiencing a real renaissance. For the first time in modern stories Russia is building four nuclear-powered submarines of the most modern class at the berths of the Severodvinsk machine-building enterprise. 19 March 2015, on the Day of the Submariner's Sailor, took place the tab of the 5 submarine. This is one of the most modern and the most secret Russian submarines of the 4 generation of the 885 Yasen-M project - the Arkhangelsk submarine.


The Arkhangelsk submarine became the fourth submarine in the series of multi-purpose nuclear submarines of the Yasen-M project, which were designed by the Malakhit Marine Engineering Bureau from St. Petersburg. In this project, many technical solutions were used that had never before been used in Russian underwater shipbuilding. The head submarine of this series (project 885 "Ash") "Severodvinsk" was launched in 2010 and June 17, 2014 included in the Northern fleet. At present, along with Arkhangelsk, multi-purpose nuclear submarines of the improved Yasen-M project are being built at Sevmash: Kazan, Novosibirsk, Krasnoyarsk. The project changes relate primarily to modernized equipment and materials, the elemental base of electronic weapons systems, which will be supplied exclusively by domestic manufacturers.

According to the naval doctrine adopted in Russia, in the future, it is the nuclear submarines of this project that should form the basis of our multi-purpose nuclear submarines (it is planned to build 8 of such submarines). It is worth noting that the ships of the project 885 are the last word in the Russian submarine shipbuilding. At the moment they are one of the most powerful weapons and silent boats in the world. Often, they are compared by combat capabilities with US Navy submarines of the Seawolf type, the construction of which was decided to be abandoned for financial reasons (only 3 boats of this type were built) and Virginia (they are being built in large series, 11 boats are already in service). 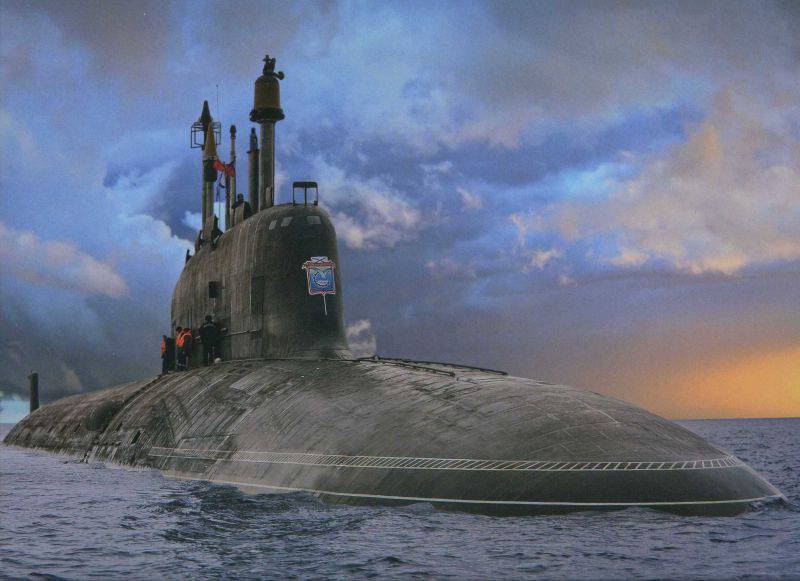 According to experts of the British newspaper The Sunday Times, the technical capabilities of the new Russian submarine are such that it can hardly be found in the ocean, which makes the Severodvinsk almost invulnerable in the face of modern anti-submarine weapons systems. “Russia is rushing ahead in underwater technology. First of all, the United States is concerned about the emergence of new Russian submarines, ”the newspaper quoted its source from intelligence services as saying. “We don’t even know half of what is on board of these boats, it’s good that so far there are not many such submarines,” the expert notes.

So far, the Russian fleet has only one submarine of the Yasen project - Severodvinsk. But before 2020, the number of such boats should be brought to 8, while 7 ships are built according to the updated project "Yasen-M". From the classic "Ash" they will differ more advanced electronic weapons, said in an interview with RIA "News»Director General of Malachite design bureau Nikolay Novoselov. At the same time, the designers try not to disclose any details about the project, the boat continues to be the most secret in the Russian fleet. Experts note that the submarines of the 885 project must become the direct heirs of the extremely successful series of submarines of the 3 generation of the 971 “Pike-B” project (according to the NATO codification of the Shark). These ships today form the basis of our multi-purpose attack submarines. Almost silent in the depths of the ocean, these boats can equally effectively act against warships and transports of the enemy, as well as strike cruise missiles at its coastal infrastructure.

Not so long ago, the Shchuka-B boats were noted in the 200-mile zone near the shores of the United States and Canada, which they managed to cause quite a stir in the overseas military. Both the US and Canadian military experienced difficulties with tracking the movements of Russian submarines. Their concerns can be understood, given that the 971 submarines are armed with the Granat C-10 cruise missiles, equipped with an 100 CT nuclear warhead and with a range of up to 2500 km. 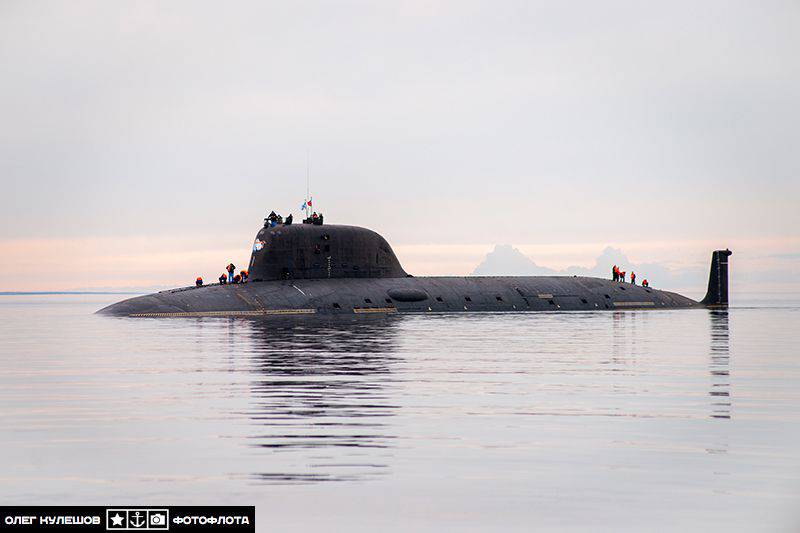 According to the journalists of the TV channel Zvezda, on the newest Russian strategic submarines of the 955 Borey project: Alexander Nevsky and Yuri Dolgoruky, also belonging to the fourth generation, the share of high-precision filling for the first time does not exceed 40%. At the same time, in the multi-purpose nuclear submarine of the 885-M Kazan project, all systems and mechanisms will be completely new, not previously used anywhere. This is a completely new equipment that has no analogues in either the Soviet or the Russian military shipbuilding. Hence the high price of these boats. For example, the first ship of the 955 project "Borey", taking into account its development, cost the Ministry of Defense 23 a billion rubles, while the cost of the head boat of the Yasen project, Severodvinsk, was determined to be 47 billion rubles. The cost of a series of 5 boats project 885М is about 164 billion rubles (about 33 billion rubles apiece).

If we draw parallels with US ships, the cost of Russian submarines of the Yasen project can be called acceptable. For example, a series of three "Sea wolves" cost the US military 13,2 billion dollars (4,4 billion dollars apiece). And, for example, the latest atomic American aircraft carriers of the Nimitz type, together with the entire air group, cost the US budget a little over 5 billions of dollars. At the same time, the cost of one submarine of the previous project of the Los Angeles type is estimated at just 741 million dollars.

At the moment, the SSRK "Ash" is the quintessence of all that the Russian defense industry has been able to accumulate over more than half a century of its development. In the draft of the boat, a compromised mixed design system was used, when the light hull of the boat "covers" only a part of the strong hull in the bow to reduce noise. For the first time in the practice of Russian shipbuilding, torpedo tubes were located not in the bow of the ship, but behind the central post section. This solution allowed the antenna of the modern hydroacoustic complex to be positioned in the bow of the boat. 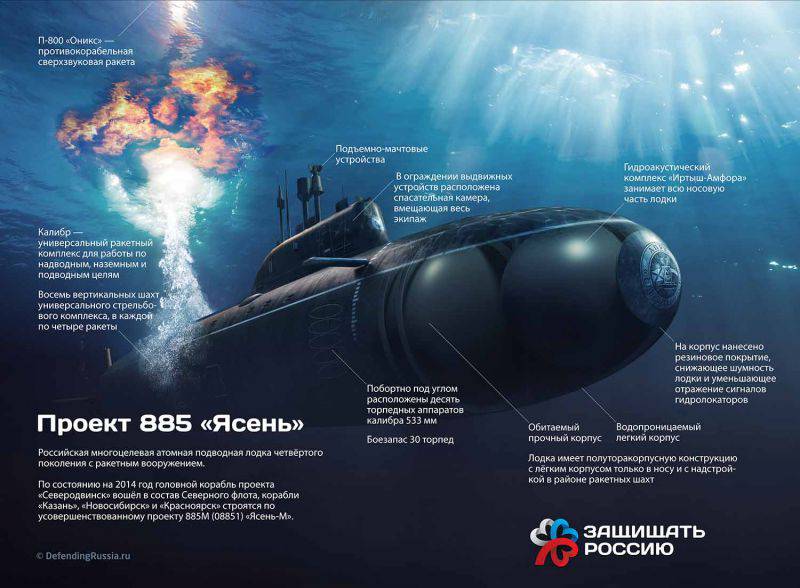 The boat can use a wide range of missile weapons, which is launched from vertical launchers. The submarine hull was made of special high-strength low-magnetic steel, which allows it to dive to a depth of 600 meters, which makes the ship almost inaccessible to all types of existing anti-submarine weapons. The maximum underwater stroke speed of the submarine is 31 node (approximately 60 km / h), surface speed - 16 nodes. The boat has one nuclear reactor, whose service life is about 25-30 years, which is comparable with the life of the boat itself.

The main armament of the submarine is located in the central part of the complex - in the missile compartment. There are 8 vertical rocket mines, each of which can be up to 4 TPK with rockets. It is possible to combine various missile systems, which allows you to flexibly change the set of combat tasks to be solved - from hitting stationary ground targets with ZM-14 “Caliber” missiles, to fighting all types of surface ships and enemy submarines with Onyx and ZM-800 missiles "Caliber". It is also planned to equip submarines with modern strategic X-54 cruise missiles (X-101 with a nuclear warhead), which have a declared range of up to 102 thousands of kilometers. In addition, in the middle part of the boat there are ten 5,5-mm torpedo tubes, through which the entire nomenclature of modern Russian torpedoes can be used.

On the basis of their characteristics, the Yasen project boats are capable of solving a wide range of combat missions: hunting for the enemy’s strategic nuclear submarines, fighting with its aircraft carrier groups, or massive strikes against ground targets and infrastructure. Experts point out that Russian boats are more versatile than American Seawolf. 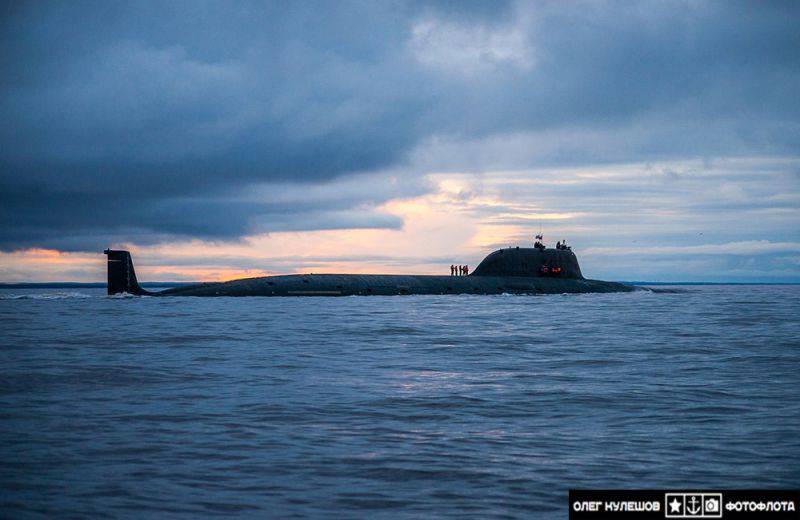 The state armaments program adopted in Russia, calculated up to 2020, puts the development of the fleet and especially its underwater component in line with the development of strategic nuclear forces and calls it one of the main priorities of the state. Of the trillions of rubles allocated to the 22 program, almost 5 trillions of rubles will be spent on the fleet. The amounts, at first glance, are astronomical, but necessary. According to experts, even 8 Russian submarines on alert are able to provide us parity with the United States. And with the increase in the submarine fleet of new generations of the 955 and 885 project, Russia will be able to make a more significant step forward in this direction. Submariners believe that despite the fact that Washington and Moscow are not ready to go into open confrontation, a real war continues in the depths of the sea. The technology war, in which the Russian fleet is not only a worthy opponent, but also a very serious competitor even for the leading maritime powers of the world.