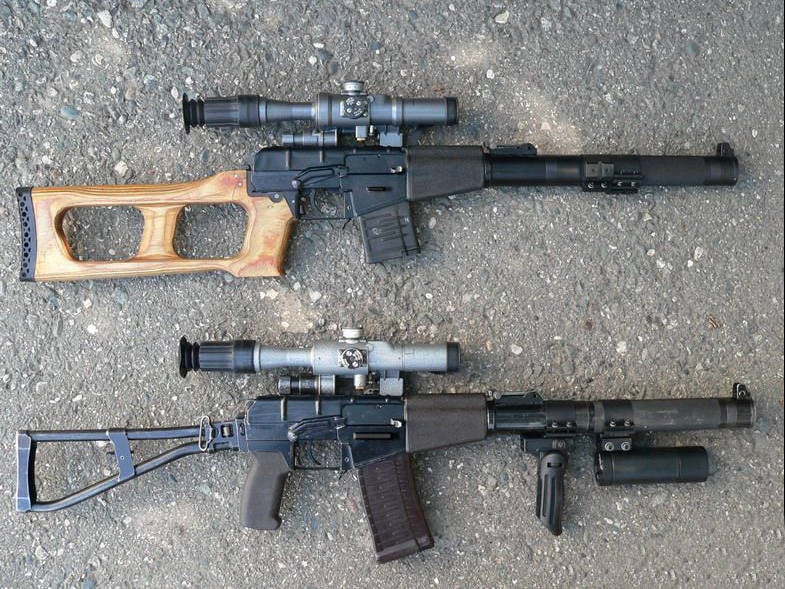 In 1987 – 1989, the system of domestic small arms was replenished with unique products created at TsNIITOCHMASH: a silent sniper complex that included a special sniper rifle “Vintorez” and a special 9-mm sniper cartridge SP5; unified with Vintorez, a silent automaton complex — a special automatic submachine gun (“Val”) and a cartridge with increased penetrability SP6.

The SP5 and SP6 9x39 cartridges were developed specifically for use in silent complexes - the subsonic initial speed of heavy bullets was combined with stability on the trajectory at a distance of 400 meters, high breakdown and stopping action.

The characteristics of the 9 x39 cartridges, however, have proven to be very useful for this type of weaponsas small-sized (shortened) machines. A low recoil impulse with a high impact at a short range, a lower sound pressure level when fired than a conventional automatic cartridge, a lower tendency of a low-speed bullet to ricochets. All this ensured the creation of small arms, comparable in mass and size characteristics with machine guns (with which small-sized machine guns also share a “tactical niche”), but noticeably superior to them in firepower, especially suitable for use in populated areas, close rooms, etc. .

It is not surprising that at the beginning of the 90-s, such a weapon was interested in law enforcement agencies, whose requirements were not fully met by the 5,45-mm shortened machine gun AKS74У. And soon were presented 9-mm samples chambered for 9х39. There was a kind of direction - small-sized machines for low-speed large-caliber cartridges. Subsequently, these "noisy" products, which became the heirs of special complexes, themselves made a curious evolution, having served as the basis for new silent automata and sniper rifles, the benefit, which was used by the used cartridges.

Family from the banks of the river Upa

The designers of the Tula TsKIB SOO, VN Telesh, and Yu. V. Lebedev, developed an OTs-9 “Tiss” submachine gun 39х11. Since its production was planned to be adjusted for TOZ, it was as unified as possible with the serial 5,45-mm automatic machine AKS74U. However, "Tiss" (mass 2,5 kg without cartridges and length 490 mm with a folded butt) remained experienced. The same designers, by the way, created another version of the weapon chambered for 9x19, which was more successful - the modular shooting complex OC-14-A “Thunderstorm-4”, but this is a different topic. 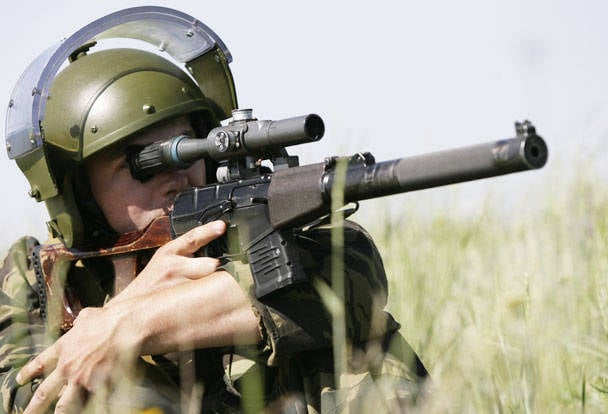 Of the small-sized machines, the 9-91 model created by the Tula instrument-making design bureau under the direction of V. P. Gryazev (then KBP and TsKIB SOO were not yet merged) was much more fortunate. The machine system is designed independently. At the same time, we paid attention to the production and economic parameters of the weapon, trying to make it simpler and cheaper to manufacture, which provided him with a certain preference on the part of the customer. At the same time, a cheaper cartridge of the PUB-9 type 9х39 was created - the special cartridges SP5 and SP6 are still quite expensive.

Automatics 9А-91 - with a gas engine, with a long stroke of a gas piston, and to give the piston rod the required length, the gas chamber is extended forward from the gas outlet. The barrel is locked by turning the bolt with four lugs. The trigger type trigger mechanism allows for single and automatic fire. The manual non-automatic translator-fuse is mounted on the right; when the fuse is turned on, its flag closes the slot for the reloading handle.

Detachable store - box-shaped, straight, double-row with a chess arrangement of cartridges. Handguard and pistol grip - from injection-molded impact-resistant plastic, handguard is composed of two symmetrical halves (cheeks). To reduce the width, a folding up-and-up butt (steel stamped) and a folding reloading handle on the slide frame are used.

The bullet of the SP6 cartridge or the PUB-9, released from the 9-91, at a distance of up to 400 meters, is guaranteed to hit a live target in a bullet-proof vest of the 2 level of protection. 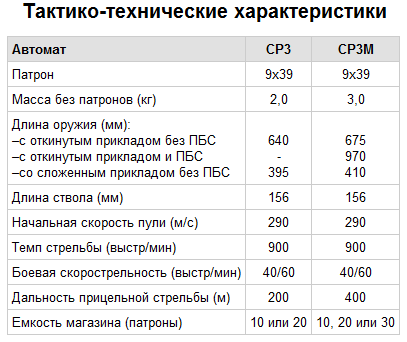 Removable devices include a collimator sight. A compensator in the form of a sloping protrusion (spoon-shaped) or an expansion muffler can be mounted on the muzzle of the barrel.

From 1994, 9А-91 is supplied to law enforcement agencies, the production was led by the KBP in cooperation with the Kovrov Mechanical Plant.

And already in 1995, the KBP, as part of the 9-91 family of weapons, introduced the VSK-9 silent 94-mm automatic sniper rifle. It can be used with SP5, SP6 cartridges, their counterparts 7Н9 and 7Н12, as well as with PUB-9. The rifle has been used in various law enforcement structures as a weapon for the hidden destruction of manpower (including in the means of individual armor) and unarmored objects at a distance of up to 400 meters. In 2002, VSK-94 was adopted by the army. Automation and locking unit barrel rifle are completely similar to 9A-91. 20 and 10 ammunition magazines can be used; when using the latter, the impact of ammunition consumption on the weapon balance is reduced. Declared scattering diameter when firing at a distance of 100 meters no more than 10 centimeters.

The transformation of the 9А-91 submachine gun into a silent sniper rifle was accompanied by the installation of a removable silencer, a detachable plastic frame butt with a rubber shock absorber, made integral with the pistol grip. The silencer (or the silent and flameless device - PBS) significantly reduces the sound level when fired and completely eliminates the muzzle flame. The absence of a muzzle flame has a positive effect on the work of night vision sights. The design of the muffler is not replaceable elements. Since the trigger mechanism allows for single and automatic fire, the FAC-94 can be used as an automatic weapon in close combat.

The standard plate on the left side of the receiver allows mounting of the sights - daylight PKS-07 or nighttime PKN-03М (both with an aiming mark in the form of a red dot). The glowing red dot reduces the time for re-targeting when shooting with the transfer of the aiming point. The PKS-07 with the magnification of 7 has a simple elliptical rangefinder in sight - quick determination of the distance is especially important for weapons with low speed bullets. The PKN-OZM night sight allows targeted fire on a moonless cloudy night at a distance of up to 200 meters, and in the light of the Moon - up to 350 meters. To improve visibility, the sight has a switchable infrared illuminator. The VSK-94 was also demonstrated with a PSO-1-1 daylight optical sight. The rifle's open aiming device is designed for 100, 200, 300 and 400 shooting distances.

Like the VSK-94 rifle mentioned at the beginning of the article, the VSS rifle is easily disassembled for carrying in a special case. Build it takes about one minute.

Among the first small-sized automaton for cartridges such as 9x39 presented TsNIITOCHMASH (Klimovsk). Naturally, the weapons were developed by A. D. Borisov, V. N. Levchenko and A. I. Tyshlykov on the basis of the noiseless AS “Val”. The new sample, created in 1994, received the designation MA "Whirlwind", and later - the index CP3 (the abbreviation CP is defined as a special development).

Automatic weapons - with a gas engine and a long stroke gas piston rigidly connected with the bolt carrier, the barrel is locked by turning the bolt with six lugs. Since CP3, unlike the base sample, is devoid of an integrated silencer, its barrel does not have openings for exhausting powder gases to the silencer. The rifling of the barrel is made with variable steepness, which should increase the stability of the bullet on the trajectory and accuracy of fire. The barrel is equipped with a flame arrester compensator. SR3 inherited from the base machine a relatively “soft” work of automation. 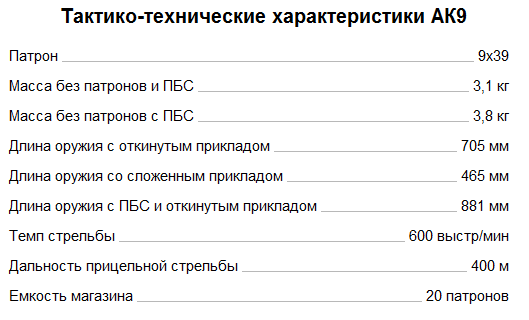 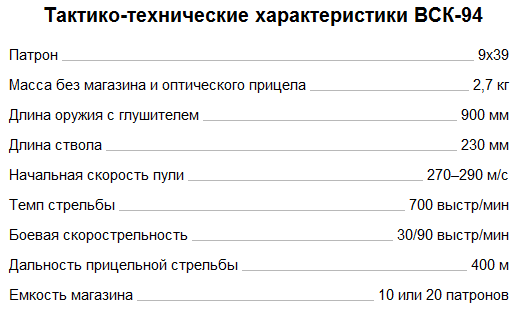 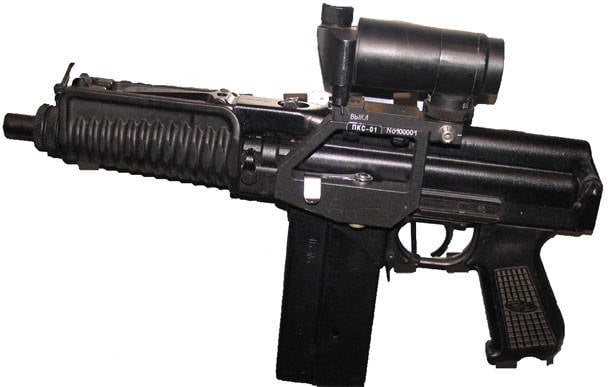 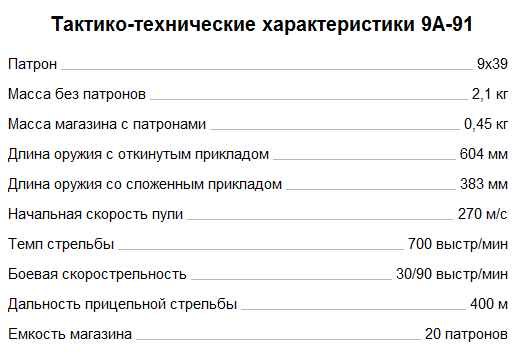 The machine is equipped with a plastic pistol grip and a plastic forearm with bulges that prevent the forward movement of the brush to the barrel muzzle. A metal butt with a folding shoulder rest is folded forward upwards so as not to increase the width of the weapon. For the same purpose, instead of the reloading handle, notched grips (engines) are used on the sides, above the forearm.

The open aiming device includes a front sight and reversible two-position rear sight. The box-shaped plastic detachable shops of the sector form with a capacity of 10 and 20 cartridges are borrowed from silent predecessors - the BCC rifle and the AU machine gun.

The small size and sleek contours allowed the use of CP3 and 9А-91 submachine guns, including as a concealment weapon.

Further development of the CP3 machine in accordance with the requirements of the security forces, gave the CP3М modification, characterized by greater versatility. CP3M can be used as a small machine gun or machine gun with a reduced level of shot sound, with day or night sights. This made it possible to offer it for armament of special units of the FSB and the Ministry of Internal Affairs as an analogue (albeit more expensive) of the 9А-91 submachine gun and its modifications. The CP3M, which has become a continuation of a special speaker, can now replace its prototype, while possessing more extensive applications.

On the slide frame CP3M appeared reload handle. The opt-out fuse box is on the right side. The type of fire translator is designed as a transverse button and is located behind the trigger. The coupling on the muzzle of the barrel allows you to mount a removable silencer (PBS). The machine gun received a left-side frame butt, a new forearm, on which a folding front hold handle was hinged.

The weapon can be used both with the former magazines on 10 and 20 cartridges, as well as with a new magazine of capacity increased to 30 cartridges.

If the designers of TsKIB SOO, as mentioned above, made an experienced 9-mm machine based on AKS74U, then the designers of Izhevsk Machine-Building Plant (Izhmash), starting the development of their small-sized counterpart for the same cartridges later, took AK 100th series as the basis. As a result, among the modern Kalashnikov assault rifles manufactured by Izhmash, there are samples for cartridges of the type 9x39, 7,62x39, 5,45x39, 5,56x45.

Izhevsk AK-9 was presented at Interpolitex-2005. Its modified version was demonstrated to the public in 2009 at the “GROWTH-2009” exhibition, at the same time its pilot production for the arming of special law enforcement units was announced.

Automatics and a barrel bore locking unit are similar to the AK74М machine with changes caused by the use of a different cartridge. The trigger mechanism allows for the maintenance of single and automatic fire and is equipped with a flag non-automatic translator-fuse.

On the left side of the receiver has a standard strap for installing an optical, collimator or night sight. The open aiming device includes a front sight and a sector sight, notched at a distance of up to 400 meters. On the bottom end there is a Picattini-type rail that allows you to mount a flashlight, a laser designator, or other devices (for example, a front retention handle) on a weapon. The forend, pistol grip and butt are made of impact-resistant plastic (polyamide) in black, the butt is folded to the right, just like the base machine.

A removable silencer can be mounted on the muzzle of the barrel. Powered by cartridges - from a two-row detachable plastic magazine with a capacity of 20 cartridges.