Auxiliary vessels of the 20180 project replenish the Russian Navy

March 12 2015
25
The contract for the construction of the next ship on the overall project 20180 was concluded in 2014 year. It is reported that the laying of the fourth ship in the series, intended for the Russian Navy, will take place at the Zvezdochka enterprise in 2015. Currently, the preparation of technical documentation and approval of the project. The media has information about the work on the redesign of the ship to replace imported equipment and generators. It is planned that before 2024, the Russian fleet should receive 5 new ships, created on the basis of the 20180 project, for various purposes, from weapons transport, to a research vessel for work in the Arctic zone.


Now the fleet the rescue tugboat Zvyozdochka (project 20180) has already been handed over, and the second ship, the marine armament transport Akademik Kovalev, is undergoing a set of mooring tests and will be included in the fleet as early as 2015. The first ship, built under the project 20180, was transferred to the fleet in 2010. Currently, a rescue tugboat is serving as part of the White Sea Naval Base as part of the Northern Fleet of Russia. The second ship, the Akademik Kovalev marine armament transport (project 20180TV), will serve in the Pacific Fleet. 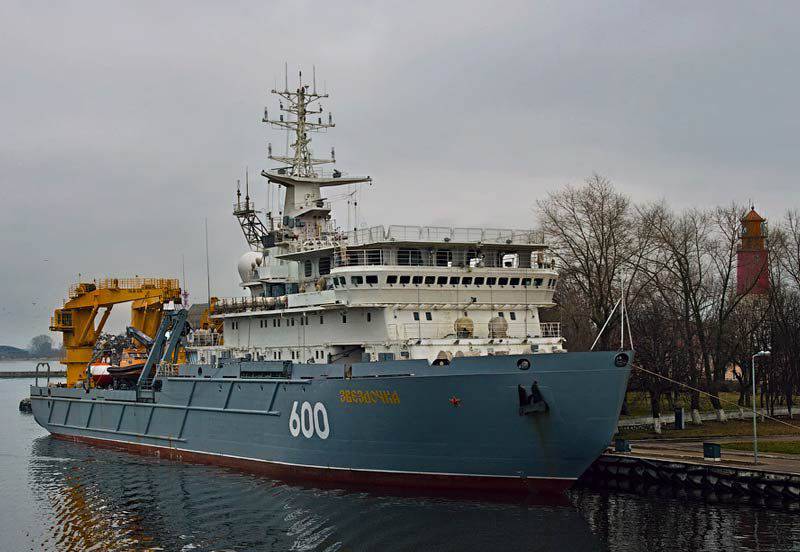 The project of a rescue tugboat of the 20180 project was developed by the Almaz Central Maritime Design Bureau from St. Petersburg. On the basis of this project, the sea transport of weapons was also created, which was designated the project 20180ТВ (20181), and the search and rescue sea support vessel - the project 20183. The chief designers of all three of these projects is A. A. Forst. The main tasks of such ships are search and rescue operations, lifting large-sized objects, inspecting and lifting sunken marine equipment, sea transportation, transshipment, ensuring tests of various marine equipment, weapons and weapons, ensuring the process of combat training of naval forces.

On Saturday, 26 July 2014, the Zvezdochka Ship Repair Center (Arkhangelsk Region, Severodvinsk) first brought the AkNem Kovalev 20180TV naval transport of weapons into the water, the official site of the company reported. The state contract for the construction and supply of the newest maritime transport of weapons for the needs of the Russian Ministry of Defense was concluded in September 2011. The developer of the project of this ship was the OJSC TsMKB Almaz. The ship of the strengthened ice class is intended for transportation by the sea, loading and unloading of various types of arms. The laying of the ship took place in December 2011, at the moment the ship is close to signing the acceptance certificate by the fleet. 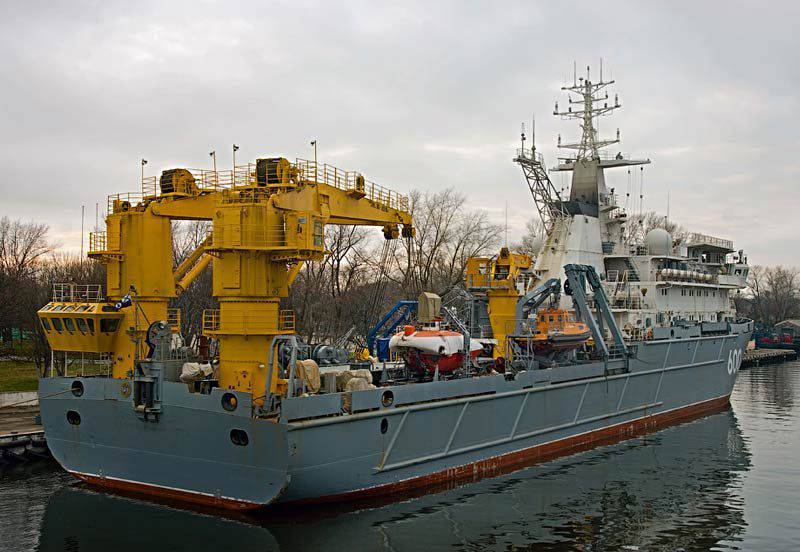 Exactly one year later, 20 December 2012 of the year, the main berth of the ship repair center Zvezdochka held a solemn ceremony for laying one more ship under this project - the rescue tugboat (SBS) of the 20183 project, which was also developed by the Almaz JSC CMDB OJSC from St. St. Petersburg. The state contract for the production and supply of the newest rescue vessel for the needs of the Ministry of Defense of Russia was signed on 1 August 2012. The multipurpose ship of the reinforced ice class is intended for carrying out search and rescue operations, transportation by sea of ​​large-sized and heavy containers and samples of marine equipment, testing and research equipment, special and military equipment. There is a possibility of using this ship in the interests of researching the Russian shelf, as well as transportation of pipeline sections. The ship should enter the Russian fleet at the end of 2016 of the year, the launching of the ship will take place in the year of 2015.

Both ships - ships of the project 20180TV and 20183 - became nominal. The first of them received the name "Academician Kovalev." Thus, the memory of S. N. Kovalev, an outstanding national designer of atomic strategic submarines, was perpetuated. The second was named "Academician Alexandrov". Thus, the memory of one of the founding fathers of the modern Russian nuclear submarine fleet, AP Aleksandrov, was perpetuated. The initiative to assign ships to these names belonged to the work teams of the Almaz Central Design Bureau, TsBB MT Rubin and the Zvezdochka Ship Repair Center. 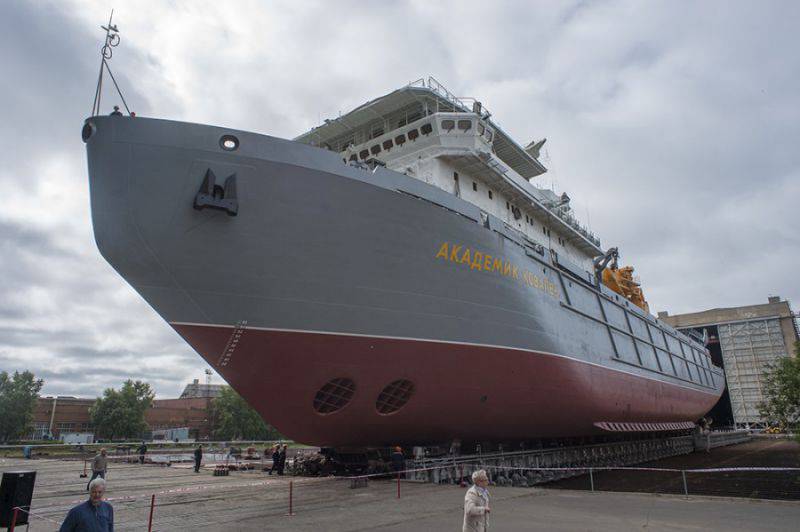 The ships of the 20180, 20180TV and 20183 projects have special hull lines and a reinforced construction with ice protection, which allows them to work in the northern seas. Due to these peculiarities, the ships of this project are less demanding on the working conditions in comparison with the ships belonging to the previous projects. Compared with analogues of previous generations, the new vessels have improved seaworthiness, increased carrying capacity and seaworthiness, a large volume of interior space. They are also able to ensure the safe transportation of special types of marine weapons in conditions of maximum safety for people and the environment.

Ships of this project are equipped with two Shorh diesel-electric power plants KL6538В-AS06 for 3625 hp. each, as well as four diesel generators for 1680 kW and two generators for 1080 kW. The propellers of the vessel are two fixed-pitch propellers for the WRC and two bow thrusters. The maximum travel speed equals 14 nodes, the economic travel mode is 9 nodes. All ships are equipped with a platform from which the Ka-27 helicopter can take off and land. 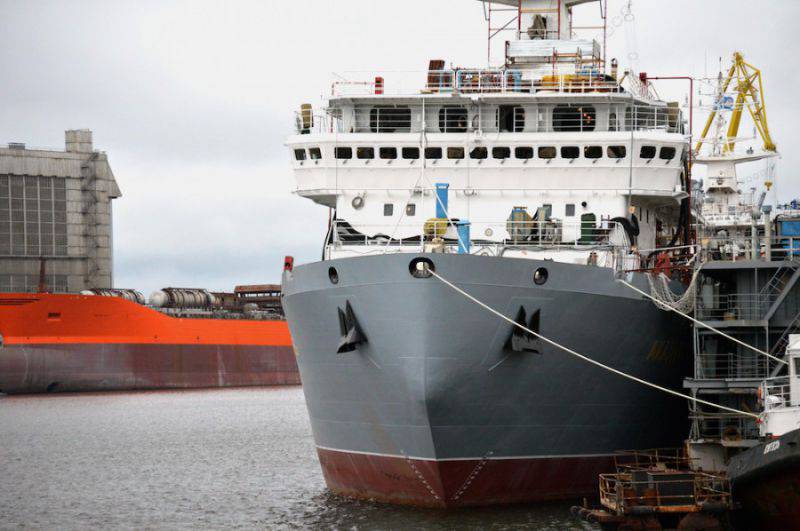 It is a basic project designed for search and rescue. It has a displacement of 5500 tons and a classic case layout. The total length of the ship 96 meters, maximum width - 17,9 meters. The hull of the vessel has a pronounced tank and a superstructure rising above it, on which the helipad is located. The largest draft of the ship is 9,3 meters. The crew includes up to 70 people. The vessel is equipped with equipment designed to tow other ships, as well as three cargo cranes, two of which are located at the stern of the vessel and have a load capacity of 80 tons each, the height of the boom lift is from 4,5 to 19 meters. With their help, you can carry out loading and unloading operations or carry out the descent and ascent of rescue vehicles. On the ship are placed the deep-sea apparatuses АС-39 “Consul” or the rescue deep-water apparatus (MUH) “Bester” of the 18271 project. To monitor the underwater objects aboard the ship, there are uninhabited Coantum and Tiger underwater vehicles.

On the basis of the base ship of the 20180 project, a sea weapons transport was created, which received the 20180TV code (20181). Ships of this type also have a classic layout. The length of the ship was increased to the 107,6 meter while maintaining the same maximum width of the vessel - 17,9 meters. The displacement of the ship due to the elongation of the hull increased to 6300 tons. The ship has one crane, which has a carrying capacity of 120 tons, there is no towing equipment on the ship. Before the superstructure is a small tank, the crew - 60 people. According to some reports, the ship can be used to provide the newest Russian strategic nuclear submarine cruisers of the Borey project with intercontinental ballistic missiles Bulava. 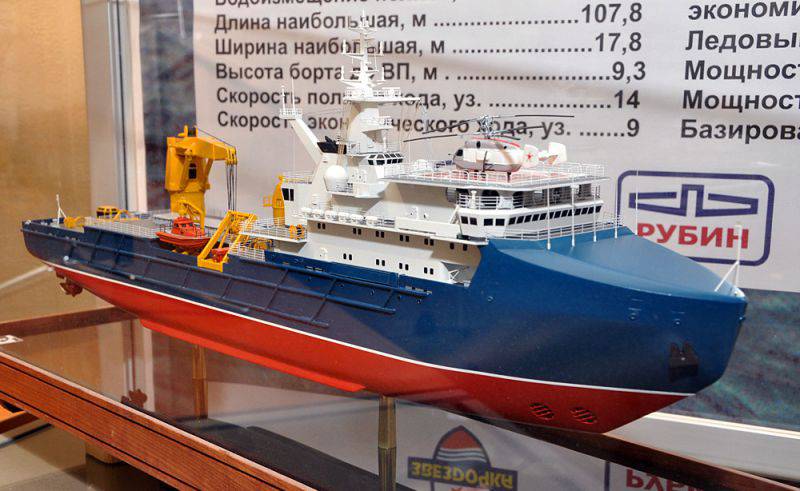 This ship with its size repeats the lead ship of the project 20180. The main visual difference of this project is the tank, which is made in a closed form without a separate deck, where the tank trim reaches the ship’s superstructure and is connected to its lower wall. The vessel's displacement is 5400 tons, there are two cranes of different capacities on board. The crew of the ship consists approximately of 65 people. Thanks to the use of a universal set of equipment, vessels have very wide possibilities for solving various auxiliary tasks and can both carry various cargoes in the internal volumes of their hull and carry out loading and unloading work on their own. 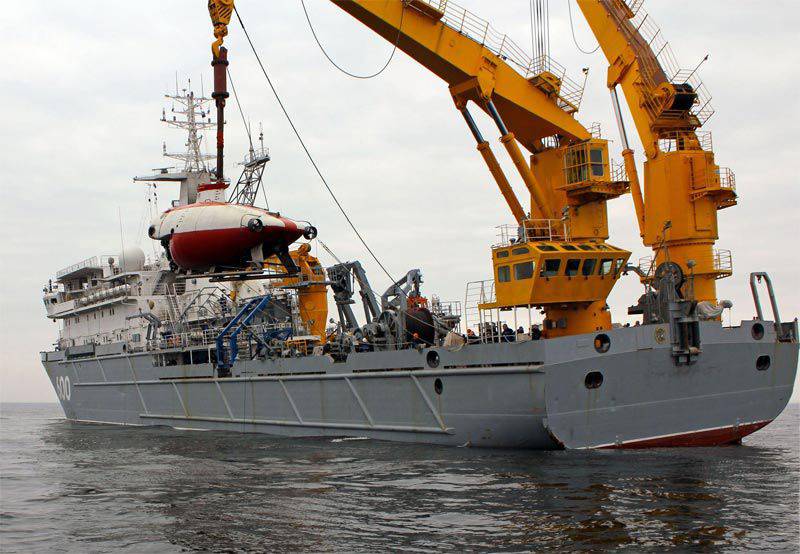 Ctrl Enter
Noticed a mistake Highlight text and press. Ctrl + Enter
We are
Rescue ship "Igor Belousov"Auxiliary vessels project 20180
25 comments
Information
Dear reader, to leave comments on the publication, you must to register.