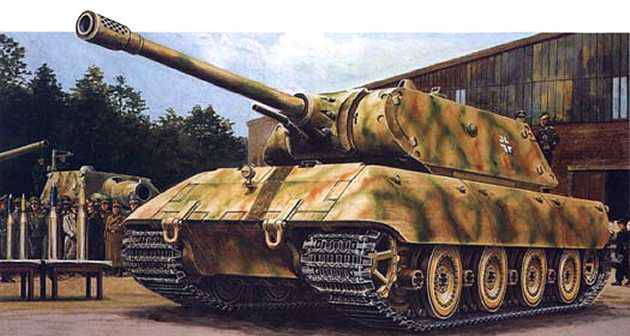 Everything that ever happened in storiesDespite the vultures of secrecy, as a rule, sooner or later it becomes available to the public. There is no secret that would not have been revealed years later. This truth also applies to the secret developments by the designers of Nazi Germany of completely new and unique tankswhich, under a positive set of circumstances, could play a decisive role at the end of World War II. The plans of the top of the Third Reich about world domination were not destined to come true, and their tanks from the E series remained at the level of experimental samples. Despite the fact that military vehicles never began to be mass-produced, today many weapons experts call them the crown of the technical thought of German designers, and we must admit that there is every reason.

Of all the various plans of the Entwicklung program (or abbreviated as "E"), the highest tank was pinned on the medium tank under the code E-50. This machine had to change not only the obsolete Pz.IV, but also “Panther”, which, undoubtedly, imposed special duties on the designers. By the way, it will be noted that, apart from E-100, this plan was closer to implementation.

In the 1944 year, having suffered a series of defeats on all fronts, Germany switched to full energy and raw material savings. True, the tanks were produced in the quantities as before, but in comparison with the armored technique of the opponents, they were inferior in all respects, from defense to firepower and driving performance. In addition, the low safety of the chassis “panther” was in the hands of the enemy. It was possible to escape from these shortcomings only by reworking the chassis design. Work on the creation of a completely new combat vehicle was entrusted to two companies - Daimler-Benz and MAN. A brilliant engineer and an excellent leader - General H. E. Knikamp.

There was not much time left; because of this, a significant part of the components was copied from existing tank models and, above all, from the well-proven “Tiger II” in real-life combat. In order to facilitate mass production, in the factory at each of the development stages of the new tanks, certain improvements were made and work was done on a certain unification of the E-50 and E-75 plans, but it wasn’t possible to bring them to a logical conclusion. 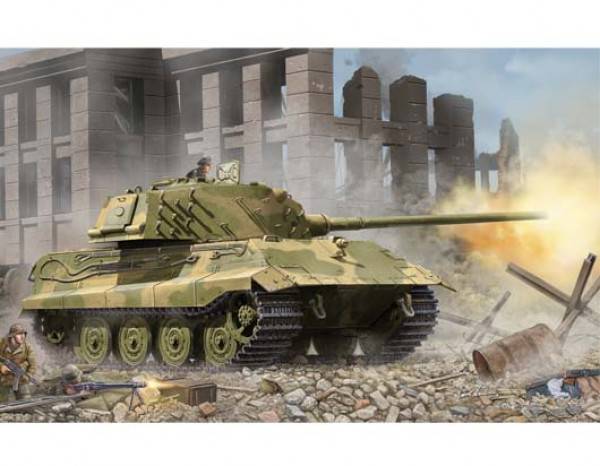 One of the key issues that the German designers had to solve in the shortest possible time was a weak undercarriage. The chassis with the placement of rollers in a staggered manner, previously used on the “Panther” and “Tiger”, had a number of drawbacks that significantly influenced the overall combat capability of the tanks. Plus, from the technological side, the similar scheme was very far from ideal, and as a result there was a need for a completely new type of suspension system, more simple.

It is impossible not to recognize the fact that the German designers coped with the task quite successfully - in MAN 1944, a unique suspension scheme, often called a “silent block”, was proposed. It consisted of twin rollers from a “Tiger II” tank, 800 mm in diameter, combined into a joint unit. The road wheels were installed on spring-loaded levers and were located on different sides of a single-track truck, however, in their construction, shafts of identical length were used. The presence of a special bearing-spacer made it possible to change the condition of the wheel in relation to the crest of the track. Springs with an installed internal shock absorber were assembled from conventional Bellevielle washers and assembled in cylinders.

The shape of the hull and its armored defense were determined in an extremely short time. It was mainly taken from “Tiger II”, but the angle of inclination of the frontal armor plates was slightly increased. Therefore, the layout and overall dimensions of the E-50 and “Tiger II” were about the same.

As a power unit, it was decided to use an upgraded version of the engine Maybach HL230, called HL234. This model was equipped with a direct fuel injection system and for a short time allowed to increase the power from the existing 900 to 1200 hp. The placement of fuel tanks, fans and radiators was similar to the placement on the “Tiger II”, which completely excluded the installation of box components in the rear part of the hull.

The tower for the new tank E-50, in order to save time and money, borrowed from the tank “Panther II”, which was removed from serial production from 1944. The constructors of Daimler-Benz and Skoda were engaged in the development of this design, the experts of which proposed a much cheaper and more technologically advanced during mass production version of the tower with the real possibility of installing KwK44 75-mm gun. The thickness of the sides was increased to 60 mm, and the straightened frontal armored sheet to 120 mm. In addition to the standard gorgeous optics, it was planned to install a Zeiss stereo range meter, night vision device and hydraulic stabilizers on the Panther II tower. According to the working documentation, this tower was codenamed Schmalturm.

To the great disappointment of the Panzerwaffe command, plans to re-equip front-line units with new tanks completely failed. True, by May 1945, the main components of the E-50 design were worked out and the French took full advantage of these trophy developments, whose tank-building industry based its designs on German designers ARL-44.

According to the idea of ​​creating a single series of E tanks, the heavy E-75 was supposed to resemble E-50 in appearance. The key difference was the installation of thicker armor and a much more powerful main weapon. The chassis of both heavy and medium tank must be identical. This was all done with the aim of collecting various modifications during mass production on one line.

The E-100 is a German super-heavy tank from the 2 World War I period. By the time of its completion of the creation of the tank E-100 were nearing the finish line. The development of the project design and the construction of the first prototype were carried out by Adler from Frankfurt am Main. The starting date for the design of the E-100 tank is considered to be 30 on July 1943. Not paying attention to the personal order of Hitler in December 1944, to stop all work on the creation of super-heavy tanks, the design and construction of the layout were continued in Hausenbek in the Paderborn region. From the beginning of the 1945, the chassis and chassis were ready. By the beginning of the tests, the Maybach HL 230 motor, OG 401216 box was installed in the company. Maybach company and Henschel L 801 steering gear. 1000 mm track widths were developed and prepared for installation by Adler. However, a tank equipped with these tracks did not fit the dimensions of the railway platform, which would have made transportation difficult during redeployment. 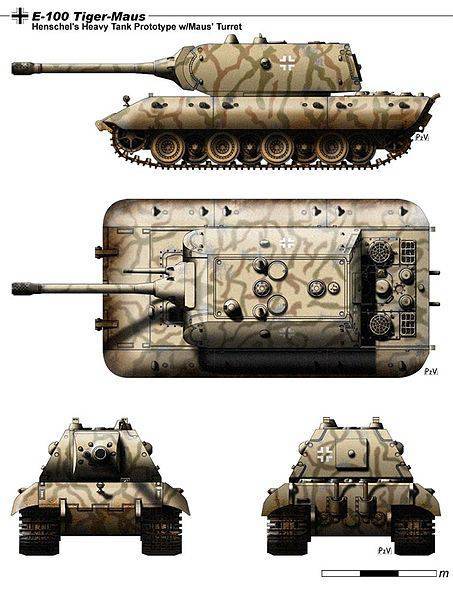 When developing the E-100 tank, they used the classic German gearbox gearbox - the engine was located in the rear, and the drive wheels - in the frontal part of the tank. Armored protection: 240 mm (frontal part) and 120 mm (side). As weapons on the E-100, it was planned to install a 150 caliber gun or a mm 170 coaxial with a Maus Turret 75 mm gun. It was assumed that the E-100, equipped with a Maybach HL 234 motor and the Mekydro control unit, will develop a cruising speed of up to 40 km / h. The prototype E-100 was captured in the Paderborn area by British troops.

With the capitulation of Germany in World War II, the plans of the Wehrmacht to create tanks capable of conquering the world collapsed!
Ctrl Enter
Noticed oshЫbku Highlight text and press. Ctrl + Enter
We are
The best main battle tanks of the world 2012 of the yearTank Panther - the grave-digger of the Third Reich?
73 comments
Information
Dear reader, to leave comments on the publication, you must to register.