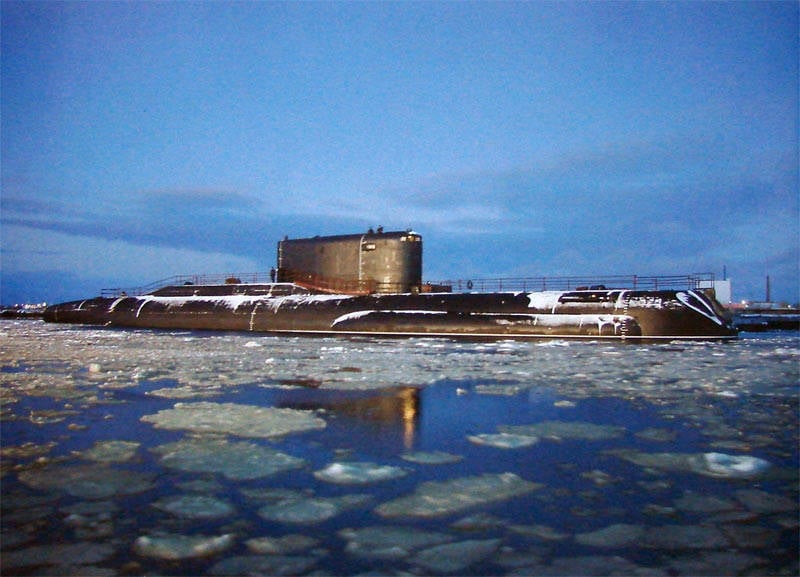 The most mysterious submarine of the Russian Navy once again surfaced in the summer of the 2010 of the year. According to representatives of the Severodvinsk naval base, another upgrade was carried out on the Sarov submarine, despite the fact that the boat itself was commissioned in August 2008. The pilot diesel-electric submarine ("B") is the development of the draft design of the Sargan submarine-stand, launched in 1988 by Rubin Central Design Bureau, under the supervision of Chief Designer A.V. Balov (the project was completed in March 1988) . In March 1989, a technical design was approved and the development of working drawings was launched. There is an assumption that the substructure of the submarine 877B served as the basis of the supporting structure of the hull.

At the shipyard OPK RF "Zvezdochka" confirmed the fact that the diesel-electric large submarine B-90 "Sarov" in 2010, really was in their waters. But from the comments on the work carried out delicately evaded. However, this is understandable. This ship, as was reported on the day the naval flag was hoisted on its flagpole, was designed for testing and subsequent testing of "new and improved samples of deep-water equipment, armament and supporting deck systems."

For a more accurate understanding, "Sarov" is a universal test bench, which is designed "for extremely long-term operation and the practical possibility of repeated upgrades." However, outwardly, this is a real submarine, which has a typical cabin shaped cabin, the contours of the outer hull that is something remotely resembling bomblers built according to the 667A project. But there are obvious differences - for example, from the central part to the nose compartment there are oblong hull projections, which, of course, does not make the ship's hydrodynamics better and, as a result, affects its cruising speed. But, obviously, not these figures are set as the main ones for Sarov.

One of the main tasks that was solved when the submarine was launched was the installation of a compact nuclear reactor as a reserve propulsion engine on a diesel submarine. The main goal is to give the fleet inexpensive and at the same time reliable warship, with the possibility of long autonomous navigation in underwater mode, like expensive nuclear submarines.

The ship was supposed to be ready for delivery in the 1993 year. But the lack of adequate funding had a negative effect on the progress of work, which was often interrupted, and in 1996, they were completely frozen at all in 40% readiness. Only five years later, after a joint decision of the Ministry of Economic Development and the Ministry of Defense, the construction of an experimental submarine was resumed - already under a technical project partially adjusted in the TsDB MT Rubin.

In August, 2003, using the Mariinsky water system, the unfinished submarine was relocated to Severodvinsk. Three years later, 19 in March 2006 of the year, on the day of the submarine fleet of the Russian Federation's 100 anniversary, a new mortgage board was installed on this order in the building plant of Sevmash. In March 2007, at the request of the nuclear center in Sarov, the experimental ship was given the open name "Sarov". In the same year, the captain of the I rank who came to visit the factory workers, crew commander Sergei Kroshkin first appeared on the pages of the local press, which caused an unprecedented surge of espionage passions, and later required unpleasant explanations directly from the commander himself, as well as his superiors.

14 December 2007 of the year The submarine was launched from the Sevmash assembly shop and December 24 of the year 2007 was launched (in the military port of Severodvinsk) without public announcement. However, the information in the press, despite all the precautions, still leaked. In July, 2008, the boat passed the necessary factory running, and later state tests and transferred to the balance of the Navy 7 August 2008 year. Since 2009, the submarine is based on the Northern Fleet, the city of Severodvinsk.

In the period from 2008, the ship performed many special tasks, it should be noted that for each successive test the ship was subjected to technical refinement and modernization in the factory. The next upgrade in 2010, according to unofficial information, was associated with the development of a completely new type of power plant. However, neither the factory nor the design bureau does not comment on this information and does not confirm it.

Ctrl Enter
Noticed oshЫbku Highlight text and press. Ctrl + Enter
We are
"Patchwork" submarines in the warUnder construction and adopted ships for the Russian Navy. Part of 2
91 comment
Information
Dear reader, to leave comments on the publication, you must to register.