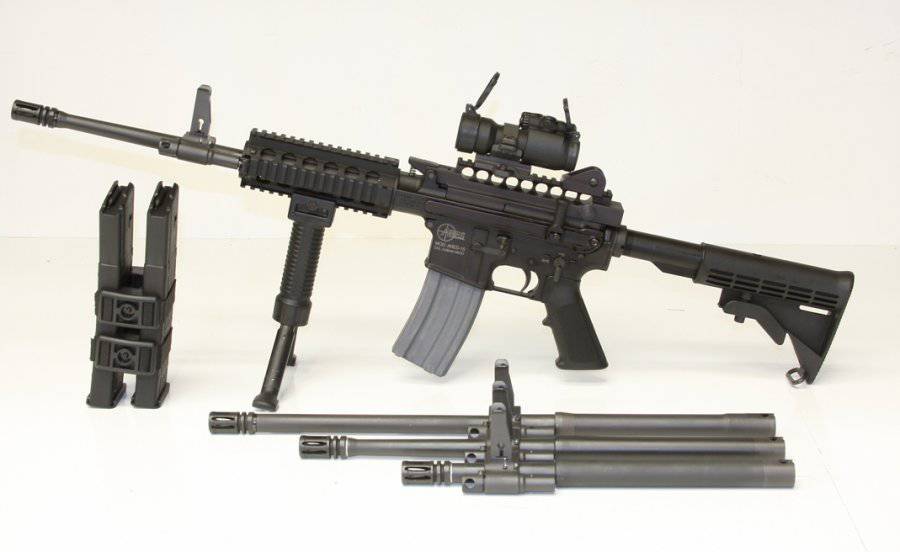 The Ares “Shrike” light machine gun was born as an attempt to create a conversion kit for reworking full-time M16 machines into a version of a light-feed machine gun with tape feed (weapon platoon support, Squad Automatic Weapon in the American classification). Similar attempts, caused by the desire to unify the weapon at the level of an infantry platoon, were carried out earlier, in 1960x - 70x, but all of them were more or less unsuccessful, as they were based on standard machines, in the barrel boxes of which you had to cut through the windows for feeding the tape, and also come up with ways to drive the tape drive mechanism, while the capacity of the standard exhaust mechanism М16 was not enough to reliably feed the tape in any conditions.

In 1998, American Jeffrey Herring (Geoffrey Herring) decided to approach the problem more radically by creating from scratch a receiver with a tape feed mechanism, quick-release barrels and a reliable gas engine suitable for installation on the M16 standard machine. The first prototypes of such a conversion kit, dubbed “Shrike”, were shown in the 2002 year, but it took almost 8 more years to finalize them. As a result, at present, the American company Ares Defense Systems, Inc. produces a whole line of weapons based on the receiver and “Shrike” mechanisms, including weapons with tape, magazine or combined power, different barrel lengths, different fittings, etc.
In addition to the usual ergonomics of most Americans, the M16 machine guns of the Ares “Shrike” line have a relatively small weight - so, in the basic configuration, the “empty” Ares “Shrike” machine gun with a combined power supply (tape + magazine) weighs almost 2 times less than a light machine gun FN Minini / M249 Para of the same caliber.

The central element of the Ares “Shrike” system is the Ares developed by Ares company with a new bolt group and a vapor mechanism. The mechanisms of the weapon are driven by a vapor-operated automatics with a short piston stroke. The gas outlet node and the piston are located to the left of the barrel, and when the barrel is separated, they disconnect with it. Barrels quick-change, air cooling. The barrel bore is locked with a rotary bolt with 6 radial lugs, which have a more robust design compared to the standard bolts of the M16 automatons. The Ares “Shrike” receiver has an open top and bottom structure. A removable hinged lid is placed on top of it, in which, in the machine gun version, there is a tape feed mechanism, actuated by a pin in the upper part of the bolt carrier. In the AAR version (Ares Automatic Rifle) with store supply, the receiver cover has a simple design, and the transition from store supply to a combined supply and back is carried out in less than a minute by replacing the receiver cover. With its lower part, the Ares “Shrike” receiver box is attached to the standard box of the M16 or M4 machine with the help of two transverse pins using a “automatic” trigger mechanism and a receiver of the stores. In addition, Ares has developed its own version of the trigger box for the tape-powered version only. In it, in place of the receiver of the stores, there is an arm for fastening the container with the tape. The Ares “Shrike” machine gun uses standard loose metal tapes chambered for 5.56ATO, as well as any standard magazines compatible with М16 - boxed with a capacity of 20, 30 and 40 cartridges, drum dual-capacity 100 and 150 cartridges. In the basic version, the entire weapon of the Ares “Shrike” line shoots from a closed bolt, automatic fire and single shots, however, it can be altered for shooting from an open bolt by installing an appropriate set of replacement parts of the firing mechanism.
The accessories of the Ares “Shrike” range of weapons include the standard butt of the M16 or M4 submachine gun, the pistol grip of the fire control and forearm with Picatinny rail guides, which is usually placed on the front Grip Pod grip, combining the handle itself and a retractable compact bipod for firing stop. Sights are also placed on the Picatinny rail guide, located on the cover of the receiver, and may include either a standard open sight, or any collimator, night, and telescopic sights as chosen by the user. Additional accessories for machine guns of the Ares “Shrike” line may include an adapter for mounting on an infantry tripod, as well as an 40mm M203 undergun grenade launcher (mounted under the forearm on a Picatinny-type rail), laser target indicators, tactical lights, etc. 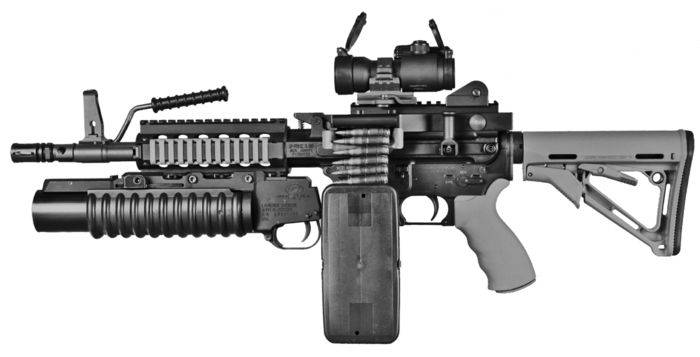 light machine gun Ares "Shrike" with only a tape feed, a shortened barrel and a M203 grenade launcher 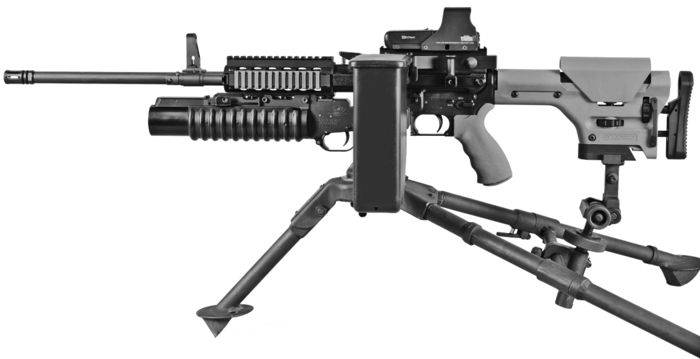 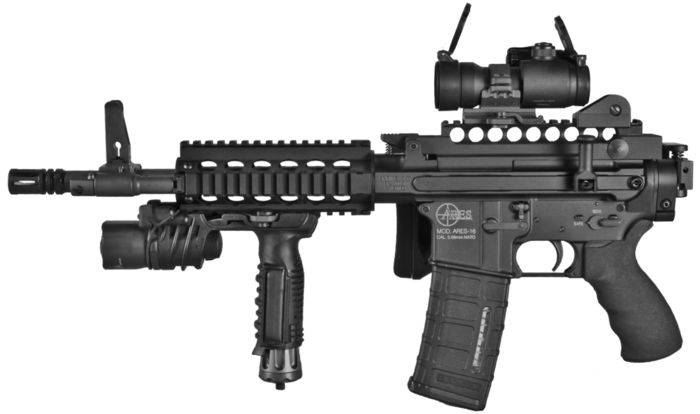 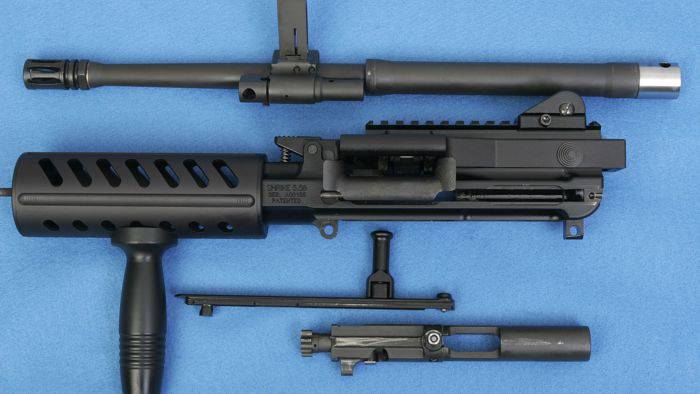 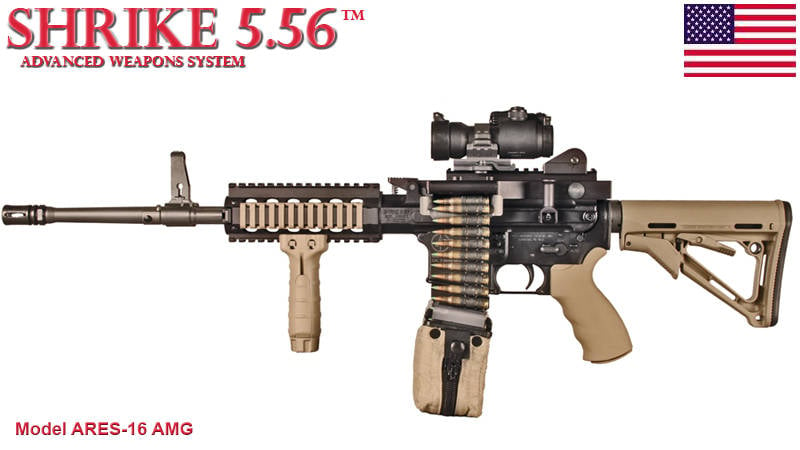 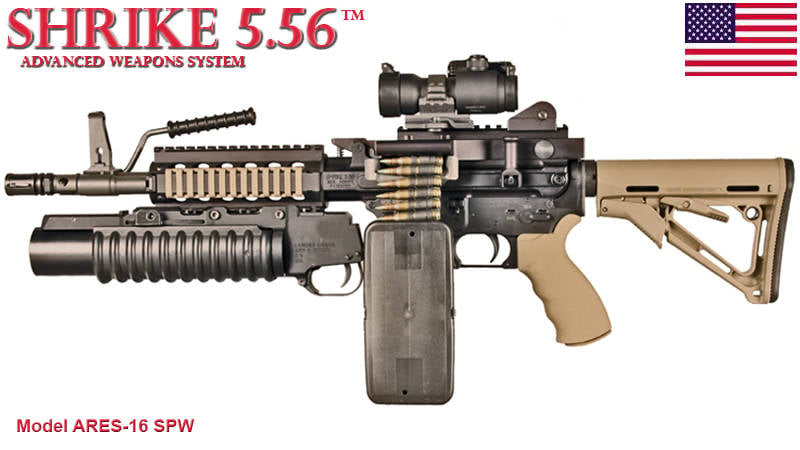 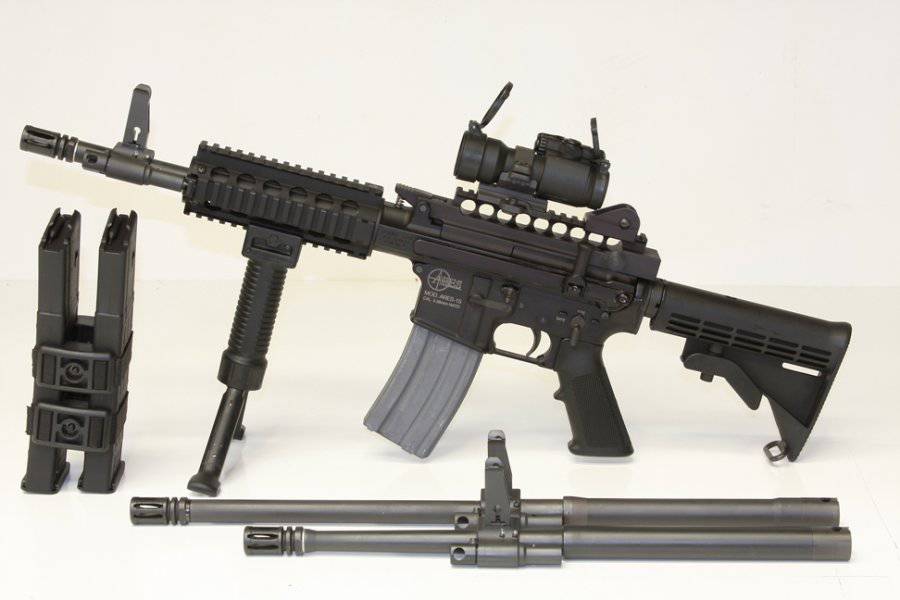 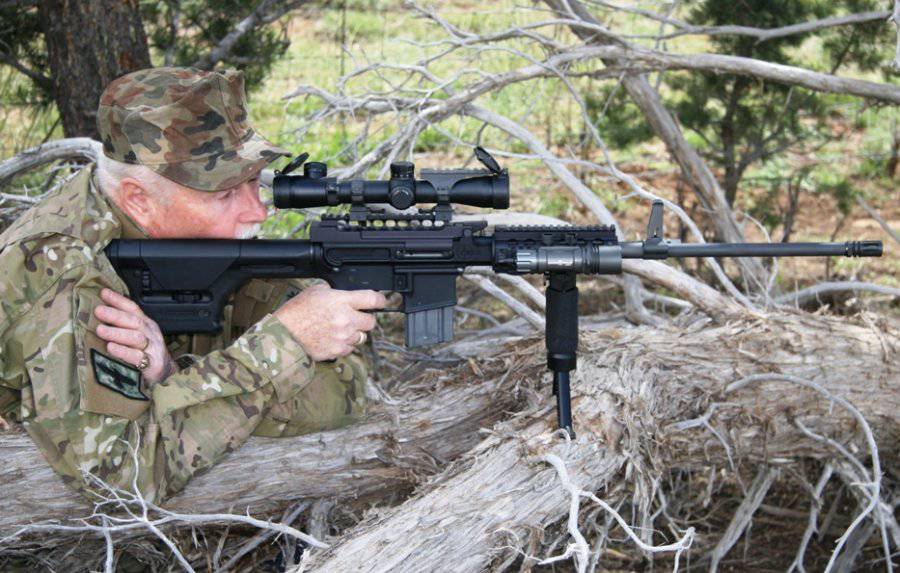 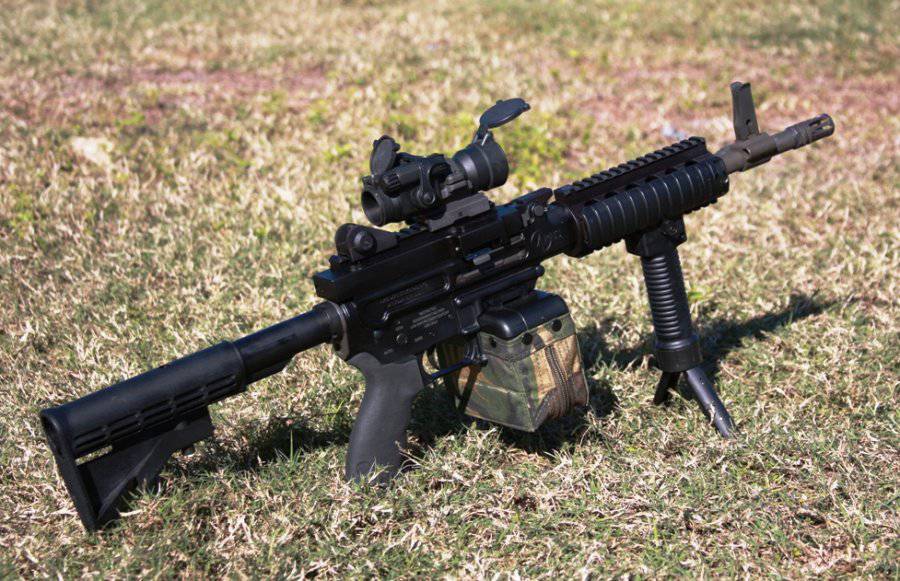 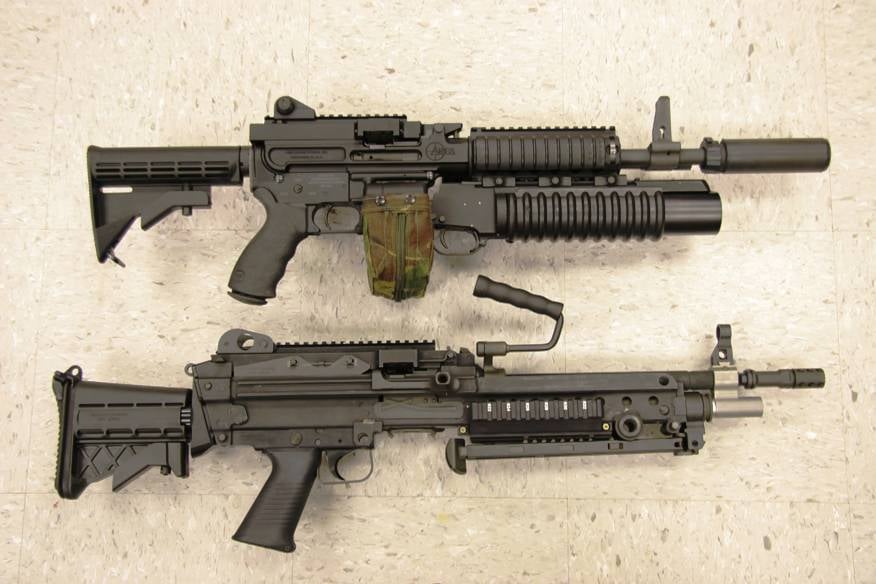 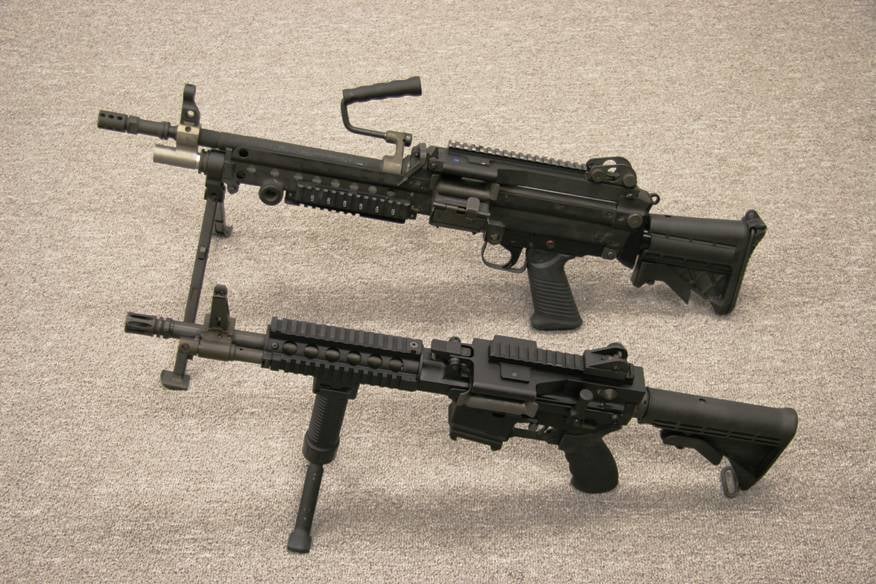 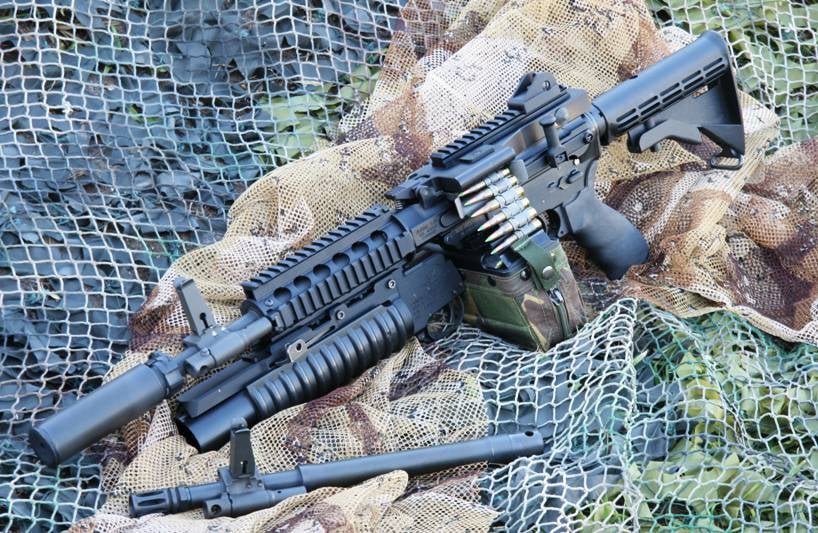 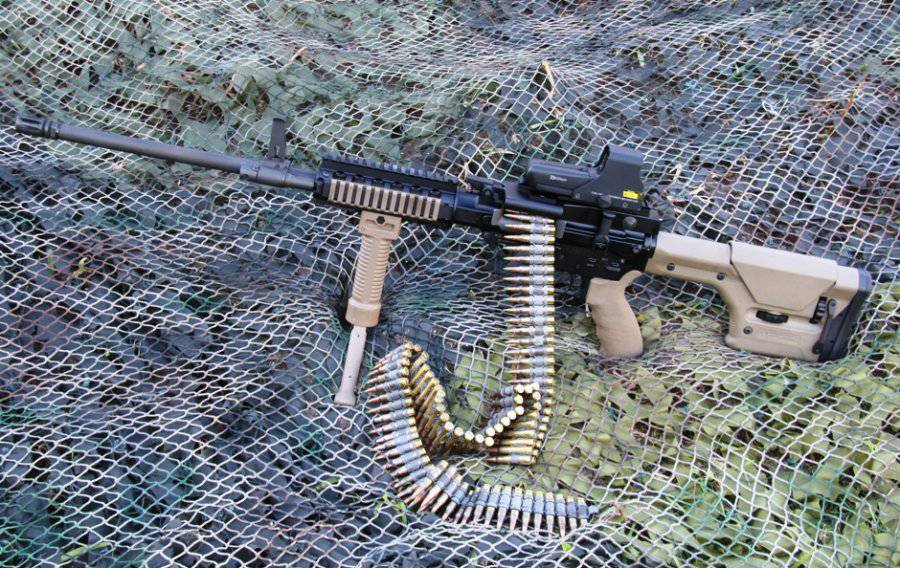 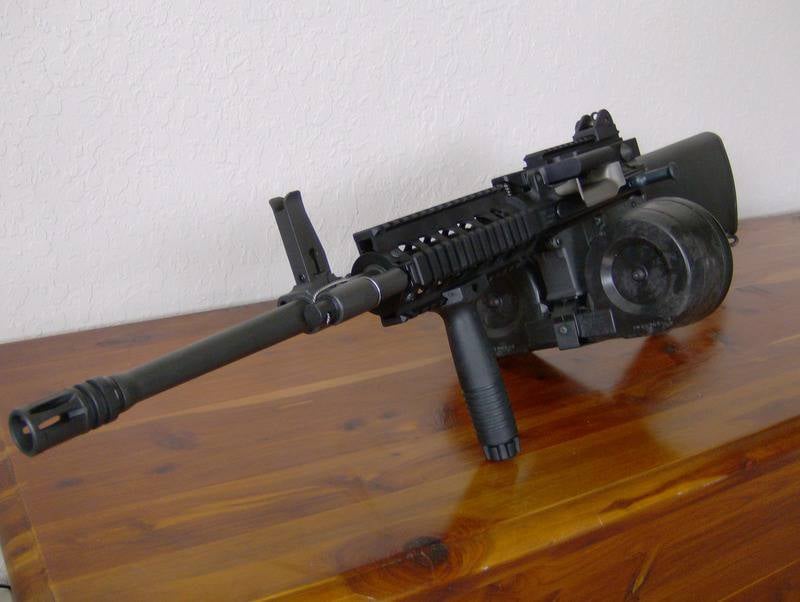 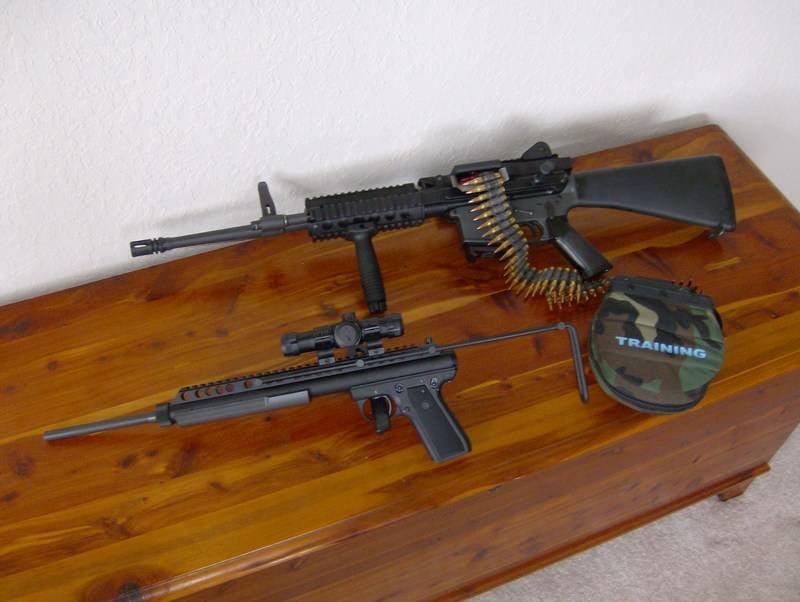 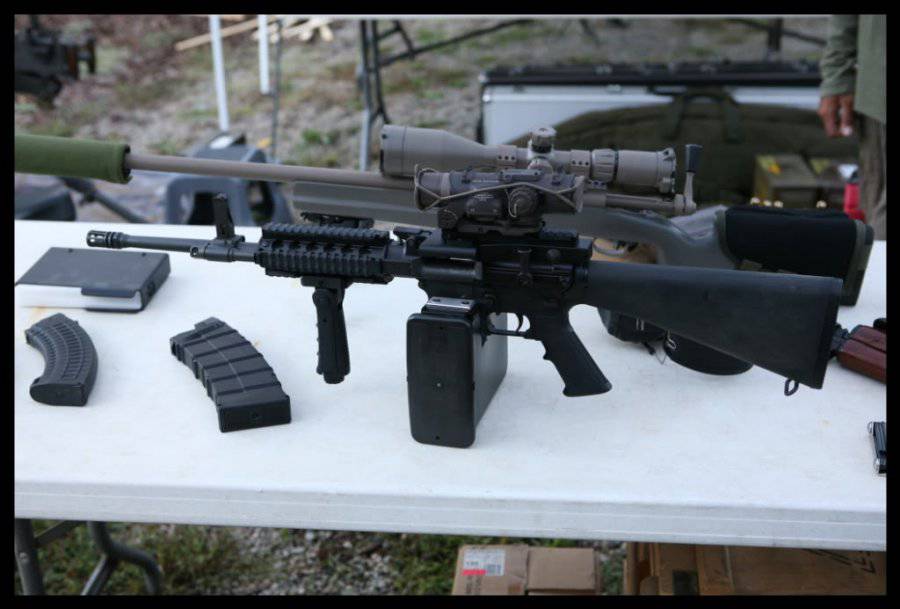 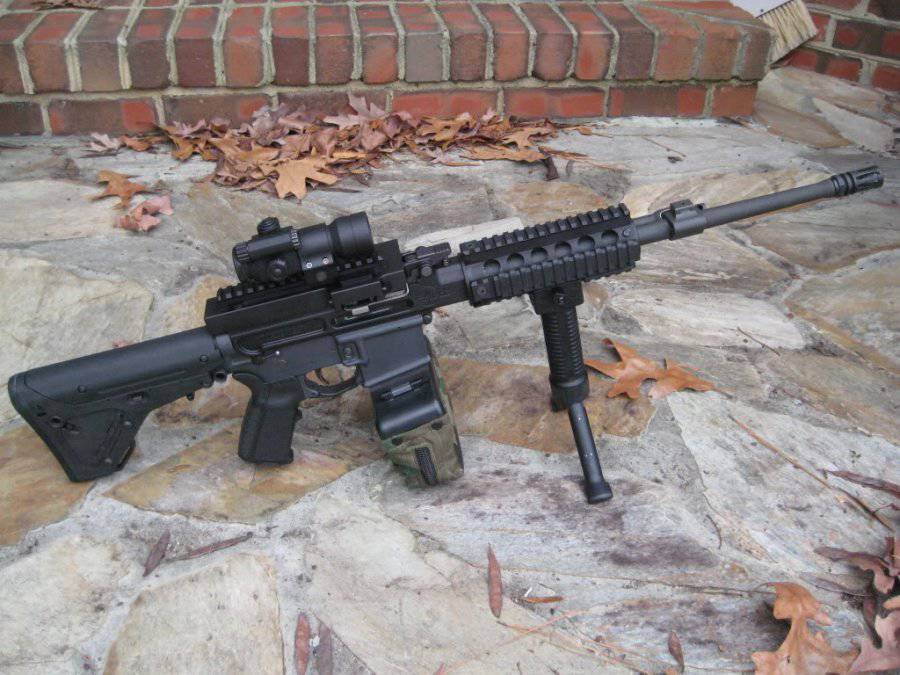 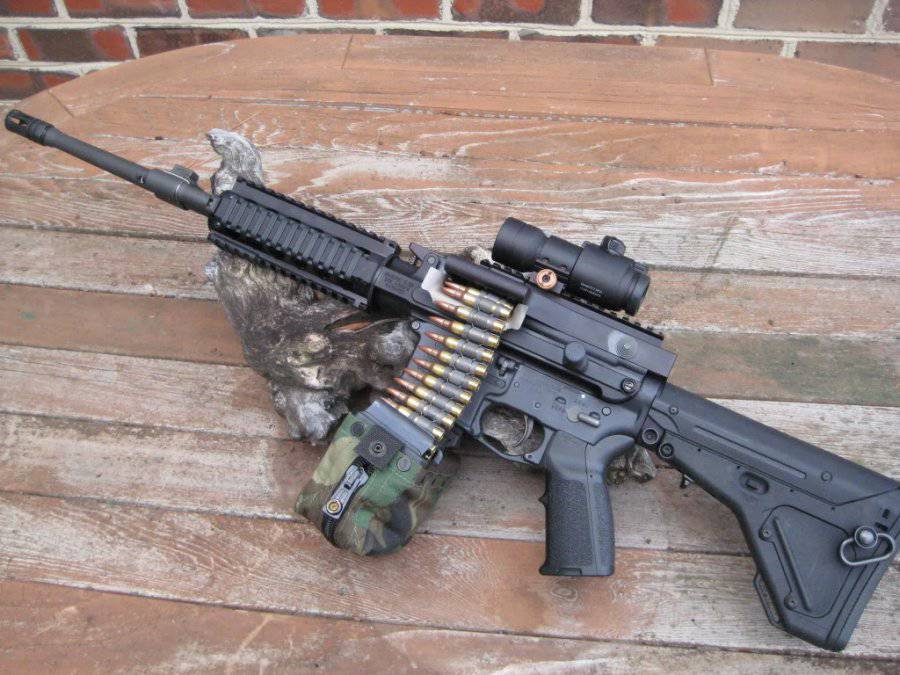 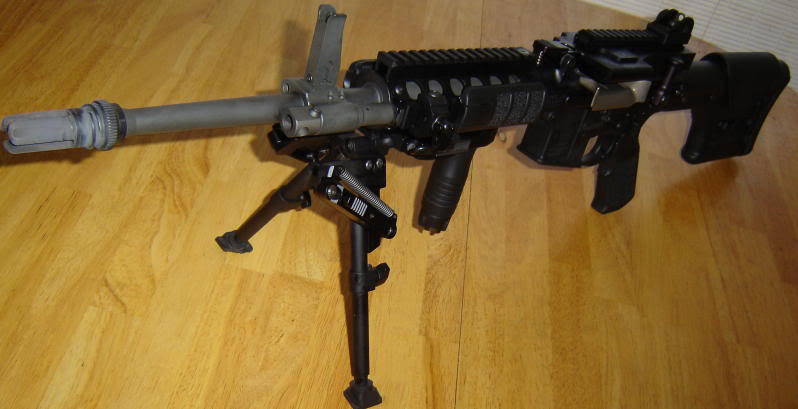 Ctrl Enter
Noticed oshЫbku Highlight text and press. Ctrl + Enter
We are
The weapon of victory. "Degtyaryov Infantry" - machine gun DP 85 years
46 comments
Information
Dear reader, to leave comments on the publication, you must to register.