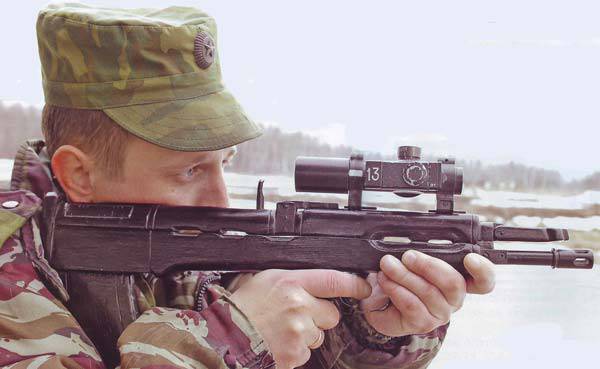 The middle of the 1970-ies was marked by the competition, which was held in the framework of experimental design work on the topic "Modern". The aim of the competition was the creation of a shortened machine gun of 5,45 caliber of millimeters. First of all, it was to become the main armament for crews of submarines, aircraft crews, driver mechanics, grenade launcher calculations and artillery pieces. The main requirements that were imposed on it were reliability, safety, and also small dimensions. The width and height of the new weapons should not exceed AK-74 dimensions, and the length should be no more than 500 millimeters.

By and large, the work of the theme “Modern” could be called competitive only conditionally. Most of the designers who participated in this competition, perfectly knew who would be the winner. Izhevsk Machine-Building Plant at that time was the largest center for the production of small arms, which in many respects could influence the outcome of the competition. Kalashnikov Mikhail Timofeevich decided to go through the most simple way - to maximally modify the new model of his machine gun, which was put into service only in 1974 year - АКС-74 with caliber 5,45 millimeter. As a result, part of the automation and receiver almost were not changed. Well, it was possible to achieve the required length simply by reducing the length of the barrel from 415 millimeters to 212 millimeters. Thus, the well-known to each specialist AKS-74U appeared, which was put into service in 1980.
It must be admitted that in many ways such a decision was quite correct - the process of setting up production was considerably simplified, although it took two full years. The cost price also decreased, repair and just the development of weapons in the army was simplified. The only serious consequence of shortening the barrel was the reduction of the range of fire, as well as the effectiveness of fire, when compared with the original model of the AKS-74.
But despite such an easily predicted result of the competition, many participants did their work, creating viable and fairly original designs, thanks to which Russian weapon science was significantly enriched.

It is quite understandable that against the background of the participation of the Russian military genius Mikhail Timofeevich, few people paid attention to the fact that the society of cadets from the Tula Higher Engineering School also took part in the competition. However, thanks to the research conducted, Sergeant A. Shevchenko. managed to develop the design of the Smerch machine gun in 5,45 caliber of millimeter. 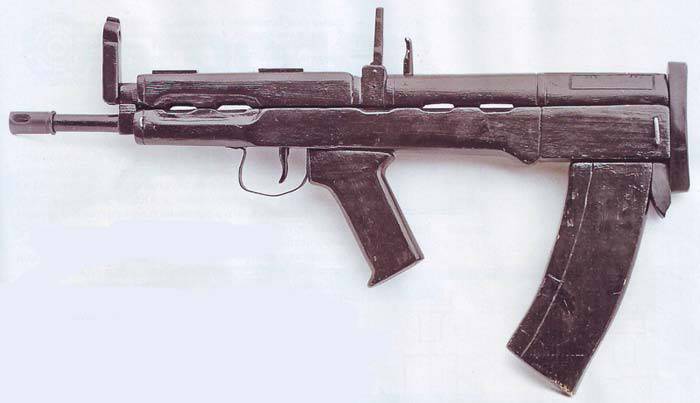 The design of the Smerch machine corresponded to the layout of the Ultrabulpap — while maintaining the ballistic characteristics corresponding to the AKS-74 machine, the automation had a long stroke of the gas piston. At the same time, the nominal length of the barrel, 415 millimeters, was maintained. It was possible to reduce the length to the required extent thanks to the use of a locking unit of a non-standard design - an L-shaped bolt that swung on a longitudinal axis with a transverse direction. At the same time, he locked the barrel with two stops insert from the receiver. Roll bolt carried out a preliminary rotation of the shutter. But the bolt was unlocked during the slide frame rollback at the end of the free stroke due to the shock interaction of the respective gate planes and the slide frame. At the same time, the first one turned to the left. 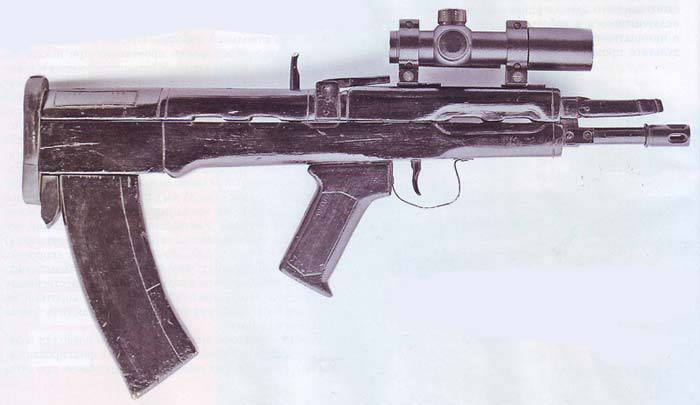 The use of the firing mechanism in the Smerch machine gun made it possible to fire continuously, in short bursts of three rounds and in single shots. It did not provide for a change in the rate of fire. So that shooting could be carried out from the left shoulder, the changes in the direction of ejection of spent cartridges were also worked out. With practical shooting using a mock-up sample, an amazing result was discovered, especially noticeable when shooting from an unstable position. The efficiency of the new model has doubled when compared with the original AKS-74. It was also noted that, if necessary, sighting shooting could be conducted even with the use of one hand, thanks to the special layout of the weapon. The center of gravity was very well placed above the pistol grip, which ensured better handling. Despite the small length of the Smerch machine gun, it had enough space to install a collimator or optical sight on the gas tube. However, this was not officially welcomed due to the fact that the side plate was considered “Gostovskaya”.

Since TVILU did not have its own production facilities, it was decided to contact the management of the TsKIB LLC of the city of Tula in order to get assistance in promoting the project of the new machine. Alas, a refusal was received indicating the reason that the TsKIB was too busy. Therefore, it turned out the way it turned out - by 1980, the usual AKS-74U was adopted, which became the usual type of weapons for many branches of the military.