In 1948, the OKB conducted surveys on armored attack planes with turbo-jets and turboprop engines, and variants with powerful piston engines were also considered. The same work was carried out in the SV Ilyushin Design Bureau.

In the autumn of 1948, some of the results of these developments were presented to MAP for consideration, where the draft plan for pilot aircraft construction for 1949-50 was already in full swing. One of the themes of the plan, the application of the Air Force provided for the creation of "Armored attack aircraft with controlled cannon armament with a piston engine." MAP, taking into account the developments of the OKB P.O. Sukhoi and S.V. Ilyushin, responded to the Air Force's proposal with two rocket attack aircraft: S.V. Ilyushin TVD and P.O. Sukhoi with TRD.

It is advisable to support the proposal of T. Sukhoi provided that the number of barrels of the front guided guns is increased from 4 to 6, while it is possible to reduce the supply of each gun from 250 to 150 to cartridges and leave two 23mm instead of two guns in the rear installation. 2. Attack aircraft with VK-2. In the draft plan on 1949-50gg. MAP has included a proposal from Comrade Ilyushin ~ an armored experimental attack aircraft from the VD-VK-2, which satisfies the TTT Air Force. For the Air Force, it is desirable that this topic be duplicated also by t. Sukhoi, but the MAP is against it.

According to its data, the project of t. Sukhoi satisfies the TTT Air Force, but requires specification of the layout (issue with V-shaped tail, wing load 250 kg / m2, chassis with tail wheel, etc.) ... "

Resolution AK Vershinina "t. Ponomarev. Nevertheless, I think that, along with the projects of the attack aircraft with a jet and turboprop engine (the latter is more real), it is necessary to do with a piston engine. It is highly desirable to do more detail the type of attack aircraft with the engine Dobrynin. Think over and report. ”

19 September 1949 was submitted to the Council of Ministers of the USSR for approval.
In parallel with the coordination of the draft plan 1949-50. The preparation of the draft plan 1950-51.
5 November 1949 of the year at a meeting of the USSR Air Force's Scientific and Technical Council on the issue “On plans for pilot construction of aircraft, piston and jet engines and research in these areas at 1950-51.” : “... After the release of the Il-1944 aircraft in 10, the Air Force did not receive a single attack aircraft.

The Il-20 attack aircraft with the M-45Sh built by t. Ilyushin are currently mothballed.

Solving the problem of giving the pilot the greatest possible view of comrade t. Ilyushin put the pilot on the engine and could not eliminate the extremely large noise in the cockpit that made it impossible to use the radio. The plane also had other problems (*). This aircraft is set limited-mobility front weapon (2 provisions) - the effectiveness of which was supposed to be tested in trials.

* Despite a number of original ideas, the draft design of the IL-20 was rejected as inconsistent with the decision of the USSR Council of Ministers and the tactical and technical requirements. From the 2 table it can be seen that this concerned the basic flight data and weapons. The main drawback was the low speed of the aircraft, which was even lower than that of the serial IL-10 (see the 7 column in the 2 table). Offensive weapons also did not satisfy the customer. A significant increase in the midsection of the fuselage and its lateral surface led to a deterioration in the aerodynamics of the aircraft, an increase in the flight weight, and an increase in the possibility of enemy fire damage. Since the distribution of the armor installed on the aircraft was carried out over a large surface, the experts of the Air Force Scientific Research Institute did not see an improvement in booking compared to the IL-10.

Extremely complicated operation of the VMG due to irrational ways of approaching the motor and its units. With all the work related to the shooting of blocks or their covers, it was necessary to disassemble the engine itself from the aircraft. All work on the motor mechanic had to perform in the upside down position. The pilot got into the cockpit only when the engine was not running. At emergency leaving there was a danger of getting under the screw.

It was noted that the fire power of the IL-20 is less than that of the IL-10. At the same time, it was possible to fire only from two cannons - either wing or fuselage. The expediency of applying the latter was not in doubt, but there was a desire to have mobile units. Along the way, we say that quite successful developments in this field that were already available at that time were G.M. Mozharovsky and I.V, Venevidova were not used. When loading PTAB, the bomb load was all 300 kg. The main positive factor was an excellent forward-down view (although only in a very narrow sector). The overview to the side and forward was the same as that of the IL-10.

However, if you sacrifice a few requirements for the normal range and volume of booking, it is possible to create an attack aircraft with a good overview (using a scheme with a pusher propeller) and great opportunities for installing various types of weapons. Such a scheme was proposed by Comrade Alekseev ** under the motor W-218 M-251.

However, the flight data of this aircraft ... is obtained significantly worse than it would be desirable to have ...

The first type was adopted for the development of m. Dry, but this task has not yet been approved by the government, therefore it is included in the application plan for 1950-51 ... "

** In March 1948, S.M. Alekseev presented a draft design of an armored two-seater W-218 attack aircraft with a powerful X-shaped M-251 motor. Alekseev designed the W-218 of an unusual layout, where it was planned to place the motor in the tail section of a conventional fuselage, and the pusher propeller - behind the tail fin. It is known that this scheme of practical application was not found due to the inability to ensure safety when landing at high angles of attack and during ground operation. The plane was not included in the pilot construction plan for 1949. The model was built, but due to the elimination of the OKB-21, work on the aircraft stopped. CM. Alekseev addressed 19 in February 1951 with a letter to the Air Force and asked him to return to the draft. Chairman NTC Air Force B.N. Ponomarev believed that building the X-218 was not feasible due to the fact that his flight data was worse than that of the IL-10. It was noted the absence of bombs (only in the transshipment variant), weak booking, the impossibility of disassembling the aircraft for its transportation. But on the gun-and rocket weapons, as well as the range of flight W-218 superior IL-10. One would expect that his climb rate would also be better. In connection with the use of a powerful engine, two coaxial screws were installed, and a version of the aircraft with a conventional chassis was also developed. The forward-down review was about 15 degrees. The presence of well-developed ejection seats by this time solved the problem of the pilot leaving the car safely. The wing had a sweep 16 ° along the leading edge, the rear one was straight. Steering and aileron control was carried out by means of separate systems - right and left, so that if one of them was damaged or failed, control of the aircraft was maintained. The W-218 was distinguished by two remotely controlled side turrets with 20-mm caliber cannons with 240 ammunition. This ensured the defense capability of the aircraft, although some questions remained regarding its operation. The offensive armament included four 15 mm caliber cannon deflected at 23 ° with 480 ammunition. The beams housed three ORO-132 jet guns. 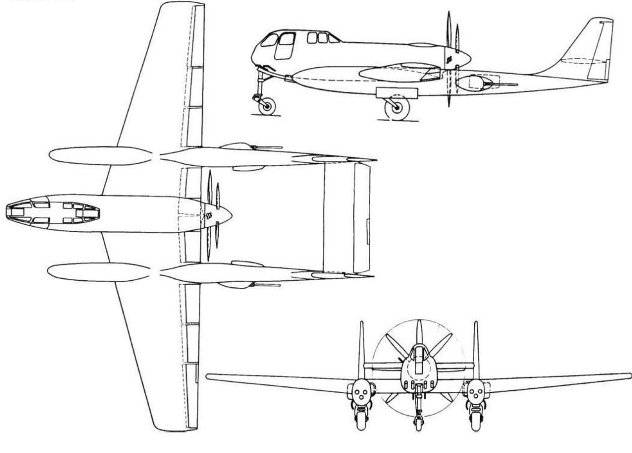 November 14 1949 was eliminated by a government decree of the PO O. Sukhoi OKB, work on the attack aircraft under the cipher “N” (Su-14) was stopped.

In December 1949, in his appeal to the deputy. Chairman of the Council of Ministers of the USSR N. A. Bulg, well, Air Force Commander Colonel General aviation P.F. Zhigarev wrote:
“In connection with the disbanding by decision of the government of the OKB Comrade. Dry, stopped the execution of several works of interest to the Air Force.
I ask your instructions from the IAP, t. Khrunichev:
- to transfer the task of preliminary design of an armored attack aircraft with the VK-1 engine, which the OKB t. Sukhoi worked on to another KB; .. "This is the wish of the Air Force Commander not fulfilled. (A pity!)

Unfortunately, the Soviet Air Force, beginning with the Il-10 propeller and up to the jet Su-25 inclusive, did not have any attack aircraft at all.
Existing promising designs Su-14 (1948) and IL-40 (1951) have not been completed and put into service.
The subsequent “political” fascination with fighter-bombers and rockets, in general, determined this direction of combat vehicles as unnecessary for the USSR Air Force. By order of the Minister of Defense of the USSR from 20 on April 1956, assault aircraft were abolished as part of the Soviet Air Force. It is being replaced by fighter-bomber aircraft — a new military doctrine takes into account the possibility of using tactical nuclear weapons and views the functions of the air force over the battlefield in a different way.
According to the then military experts, the main forces should be sent to attack targets located outside the range of ground forces. Thus, the presence in the Air Force of a specialized attack aircraft (in this case, IL-40) became unnecessary. Only two decades later, analyzing the actions of aviation in local conflicts, once again recognized the need for such aircraft to directly support ground forces on the battlefield.
Which naturally was a big mistake.
About Su-14 remained only, the alleged LTH and the reconstructed appearance, although it could well become the first jet attack aircraft of the Soviet Air Force as early as the end of the 40.

Ctrl Enter
Noticed oshЫbku Highlight text and press. Ctrl + Enter
We are
Su-25 attack aircraft in AfghanistanExperimental airplane Photon
7 comments
Information
Dear reader, to leave comments on the publication, you must to register.