Automatic Plant them. Degtyarev A545 and A762

November 28, 2014
178
Work on the new combat equipment soldier "Warrior" is almost completely completed. The only element of this complex, which has not yet been determined, is the small weapon. At present, the Ministry of Defense and a number of defense enterprises are studying the existing types of weapons and are choosing a promising machine gun for the army. According to the latest data, the type of machine gun that will be included in the “Warrior” kit will be determined before the end of this year. 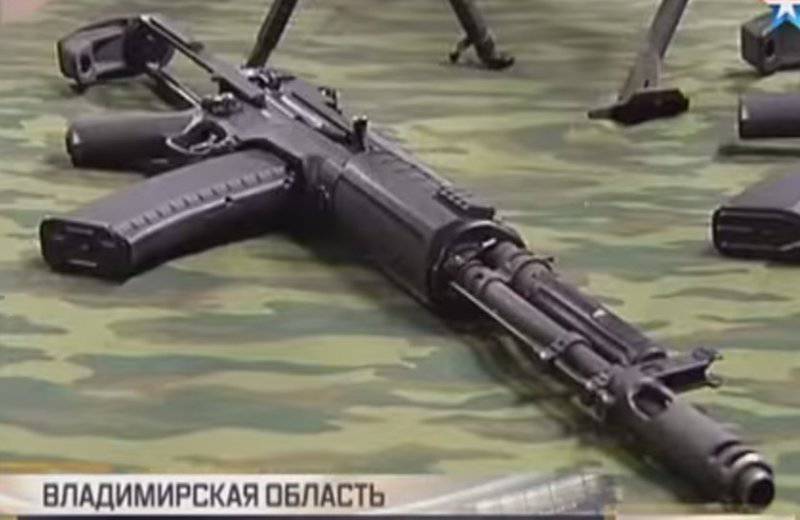 It is known that the development of two leading domestic weapons enterprises is competing for the right to join the new combat equipment. Concern "Kalashnikov" offers its new AK-12, created on the basis of old and new developments. Kovrov Plant them. Degtyarev presented for the contest A545 and A762, which are also a further development of existing structures.

In recent years, as these or other stages of the competition are being held, news about the prospects of the presented weapons. In particular, it was reported that the AK-12 machine gun did not cope with some tests and therefore has dubious prospects. Such news, in particular, said that Kovrov А545 and А762 machines could be the new weapons in the “Warrior” equipment. However, the results of the competition have not yet been officially announced. Therefore, while all the submitted samples can be considered potential winners of the competition.

Automatic machines A545 and A762 are developed by the designers of the Plant. Degtyarev under the leadership of S.I. Koksharova. This weapon is a further development of the AEK-971 and AEK-973 machines, created in the eighties. In the early nineties, AEK-971 participated in the Abakan program, but lost to AN-94. It should be noted, even after winning that competition, the automatic machine AN-94 was produced only in small series and did not receive much distribution. AEK-971 was also produced in small batches ordered by the Ministry of the Interior.

Accurate information about the production of AEK-971 machines in the second half of the two thousand years is absent. Perhaps for several reasons, the production of these weapons was discontinued. Already at the beginning of this decade, the Plant them. Degtyarev resumed the production of automata, and also began their modernization. The result of the latter was the appearance of weapons with the A545 and A762 indices, which are now participating in the competition within the framework of the “Warrior” program.

The main feature of the AEK-971, AEK-973, А545 and А762 machines is the use of the so-called. balanced automation. The essence of this idea is to use a special part-balancer, the mass of which coincides with the mass of the shutter. During the shot, the bolt moves backward, and the balance bar moves forward at the same speed. Due to this, the impulse created by a bolt strike in the rearmost position is compensated, which leads to an increase in the accuracy and accuracy of automatic fire.

The AEK-971 and A545 machines were designed to use an intermediate cartridge 5,45x39 mm. AEK-973 and A762 use cartridge 7,62x39 mm. In fact, these two “families” of weapons differ only in the type of ammunition used. The design of all four samples is based on the same ideas. At the same time, the new A545 and A762 machines have some noticeable differences from the previous AEK-971 and AEK-973, due to further refinement of the design.

Kovrov automatics with balanced automatics have a “classic” layout with front store layout. Automatic equipment is built according to the vapor circuit with the use of an additional balancer, which compensates for the gate pulse. During the shooting, the gas piston sets in motion the bolt group, which moves the balance bar through the gear. The latter is located in the upper part of the receiver and inside the gas tube.

An interesting feature of the Kovrov machine guns of earlier and later modifications is the design of the receiver. AEK-971 and AEK-973 had a box similar to the corresponding Kalashnikov assault rifle with a removable top cover. A545 and A762 received a fixed upper part of the receiver, and dismantling and maintenance of weapons must be done after removing the back cover.

The design of the bolt locking the barrel by turning is a modified version of the AK-74 automat. The trigger mechanism of the А545 and А762 automatons allows firing with single shots, with a cut-off of three shots and in automatic mode. Four-position flags of the fuse-translator of fire are located on both sides of the receiver, above the pistol grip. This allows you to change the fire mode without removing your hand from the handle, and also allows for convenient operation of weapons both right-handed and left-handed.

The AEK-971 and AEK-973 assault rifles were equipped with frame butts, which were folded on the hinge sideways. A new weapon from Kovrov’s design was the butt of a telescopic design Now it is made in the form of a back plate for an emphasis on the shoulder and two metal rods moving along the guides of the receiver.

In the basic configuration, the А545 and А762 assault rifles are equipped with an open sight and a front sight. For mounting other sights, it is proposed to use the long Picatinny rail provided on the upper surface of the receiver. Short strips are available on the side surfaces of the plastic forend and can also be used to install the necessary instruments.

The combat supply of new machines is carried out from standard domestic stores on 30 cartridges 5,45x39 mm or 7,62x39 mm. To simplify the manufacture and operation of weapons, it was proposed to use shops borrowed from Kalashnikov assault rifles.

New machines without a store weighs about 3,3 kg. Used automation, despite the apparent complexity, provides a rate of fire at the level of 800-900 shots per minute, as well as much higher accuracy than the existing weapons in the troops. Earlier it was reported that the AEK-971 assault rifle has about twice the accuracy with automatic shooting than the AK-74. Similarly, the comparison of AEK-973 and AKM using the cartridge 7,62x39 mm looked like.

Until a certain time, in numerous discussions of the current competition, the result of which should be the choice of the machine for the new equipment “Warrior”, there were disputes exclusively about the characteristics and prospects of A545 / A762 and AK-12. However, at the end of September last year, a new topic appeared for discussion and debate. Domestic media reported that, according to the results of preliminary tests, the AK-12 assault rifle was not admitted to state trials. From this it followed that the weapon of Kovrov designers remains the only real contender for victory in the competition.

From the latest reports that appeared during this year, it follows that the Izhevsk machine gun was nevertheless admitted to state trials and again competed with the weapons of the Plant. Degtyarev. Probably last year's news did not quite correspond to reality, and the AK-12 was able to pass preliminary tests, but the military issued a list of the necessary improvements.

Apparently, all necessary improvements were made, as a result of which both proposed families of small arms could take part in recent state trials. The results of the check and the decision of the military should be published as soon as possible. There is not much time left for making predictions about the results of the competition.

It should be noted that in the current situation, both of the proposed machines have approximately equal chances to enter into the composition of the “Warrior” equipment. AK-12 has advantages in the form of lower cost and comparative simplicity of design, and А545 / А762 can attract a potential customer with high characteristics of accuracy and accuracy of fire. Also, one should not forget that various backstage processes, lobbies, etc. can affect the results of the competition.

The choice of the military can be based on various technical, economic and other features of the proposed weapon. For this reason, even now, several years after the start of the selection process for the “Warrior” machine, the result of the competition is not completely clear. You can make assumptions, but they may be wrong. The intrigue remains until now, but in the very near future, the Ministry of Defense should announce its decision.