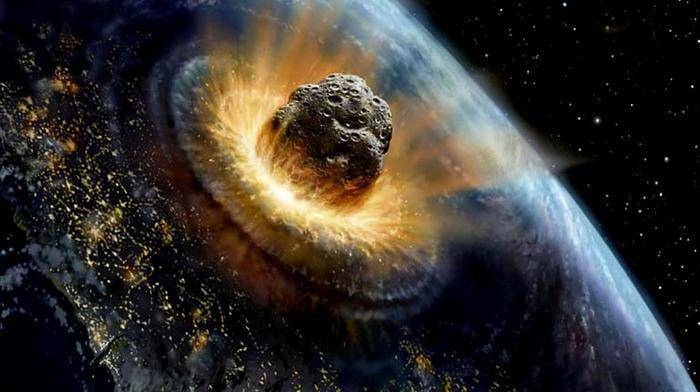 Just over two weeks ago, on the night of 4 in August, the inhabitants of the tiny island state of Niue in Oceania, whose number is only 2 of a thousand people, were frightened to death. The reason for this was the sound of an explosion of monstrous power, which awakened everyone. The first version was thunder, but the sky was clear and did not indicate anything about the thunderstorm. Later, the Carter observatory located in New Zealand reported that a giant meteorite exploded at an altitude of more than 20 kilometers directly above the islands of Oceania. Astronomers immediately remembered that the largest meteorite known so far in the 2008 year was barely there, and it did not fall on Canada. Just as in the present case, it crashed into small parts in dense layers of the earth's atmosphere. The energy that was released was equivalent to 100 tons of TNT.

The most alarming for earthlings is the fact that not a single cosmic observatory of the world has previously determined these uninvited guests from the depths of the Universe and the population was not warned about their terrible visit. For example, in the spring of 1989, an asteroid with a diameter of 300 meters Asclepius crossed the orbit of our planet at the point where the Earth was literally six hours ago! Nobody saw anything during the approach! The asteroid's visit was noticed by researchers only when it was already moving from the Earth. While cost. These meteorites were, of course, quite large, but their global collision with the surface of the planet was no longer a global catastrophe. But what if we are in one day, which will not be beautiful at all, something will fall on our heads, with a mass that is thousands of times greater? And not a relatively innocent meteorite, but a huge asteroid?

It is necessary to recognize that everything is extremely serious, and this is confirmed by the fact that the development of methods to counter the asteroid hazard is involved in many states.

Recently, scientists from the American Institute of Planetary Sciences, located in Arizona, conducted their own computer simulation of the consequences of a possible collision of the Earth with a space object with a diameter of one kilometer. As conditions, it was determined that the asteroid will enter the earth’s atmosphere at a speed that is average for moving such space boulders - 18 kilometers per second and will fall into the ocean at an acute angle of 45 degrees. As a result, scientists have received a picture of the apocalypse. The impact will lead to the fact that a water fountain will fly up, the diameter of which will be a thousand kilometers to the maximum height of more than 100 kilometers. Splashes and steam generated will instantly raise 42 billion tons of water into the atmosphere. What will happen to humanity in such a case? The search for a real answer to this question was not included in the task of scientists from Arizona, but it is obvious that a catastrophe of global proportions is inevitable, and humanity is facing the fate of dinosaurs - we will simply die out, and instantly.

A few years ago, astronomers have already figured out when something like this could happen to our planet. If nothing is done, in 2036, the Earth could be the target of the giant asteroid Apophysis, the diameter of which is 320 meters. Opened seven years ago, in the 2004 year, it is as if prophetically named after the ancient Egyptian god of Darkness. The cosmic trajectory of Apophis has long been carefully calculated. Near the Earth, it appears systematically. The next convergence will be observed in 2013, 2021, 2029. Astronomers reassure that these convergences do not pose any particular danger, since the distance to the asteroid will be significant. Another thing - the next rapprochement with Apophysis. It is in 2036, the next rapprochement will occur at which the "God of Darkness" may collide with the Earth.

How to stop such a catastrophic development of events with a result that could be the death of all mankind? Options offered a huge amount. Their essence boils down literally to two things. First: destroy the Earth-threatening asteroid, splitting it into small parts far on approach. Second: to force him to change the trajectory so that he swept past at a safe distance.

In general, there are a lot of questions about this. And here we can say in time the message arrived from Russia. It turned out that scientists of the State Rocket Center named. Academician V.P.Makeeva working tirelessly to solve this problem, and even more, the first results were obtained. The Kapkan spacecraft and the Kaissa reconnaissance probe were created in Miass. The “trap” is able to destroy potentially dangerous asteroids using nuclear weapons, and information about them will transmit the probe. For the delivery of these devices into space, it was proposed to use the operating Soyuz-2 missiles, as well as those being in the process of developing Rus-M. The creators promise that the revolutionary system will reliably protect the Earth from asteroids, whose diameter is up to 300 meters. For comparison, the asteroid that killed the dinosaurs had a diameter of about 10 kilometers.

Miass experts consider the two most realistic scenarios of dealing with dangerous celestial bodies. Charge explosion can occur both directly on the surface of a cosmic clump, in order to break it into smaller pieces, or nearby, in order to change the trajectory of the direction of motion. The selection of the scenario will be carried out after analyzing the data transmitted by Kaissa.

The way of dealing with a possible asteroid threat proposed by Miass specialists is not the only one. So, in the fall of 2008, a student from the University of Queensland of Australia won the announced competition for the best technical project that will help to neutralize the asteroid Apophysis. She proposed to wrap the main part of the asteroid in a special reflective film. Thanks to the YORP effect, this will allow the orbital trajectory of the asteroid to be changed.

In addition, alternative ways of influencing the orbit of the motion of a celestial body are considered. One of them is the use of a gravitational tug - a huge spacecraft that will converge with dangerous asteroids and with its gravitational field affect their trajectory.

Perhaps the answer to the question of how to prevent asteroids from colliding with the Earth was already seen in the American film 1998 of the year “Armageddon”. It is in the plot of this film, the usual miner Harry Stamper, played by Bruce Willis, blows up a powerful nuclear bomb, which was installed inside a giant asteroid with the help of a drilling rig. But this is fantastic, and the complexes for protecting the Earth created by Russian scientists are quite real.
Ctrl Enter

We are in Yandex Zen
I fight for the electric body! Ground mobile robots on today's and tomorrow's battlefield. US Technology Overview
Nuclear Hyper Speed ​​Asteroid Interception Apparatus - HAIV
4 comments
Information
Dear reader, to leave comments on the publication, you must to register.