November 12 2014
230
In the coming years, Russian ground forces should receive the first production Tanks "Armata". This project is currently at the testing stage, however, it will take some time to fine-tune and establish serial production. Although some information about the new Russian tank has already become public, most of the information has not yet been disclosed. In recent days, the management of the Uralvagonzavod Corporation, which is the main contractor for the Armata project, has made several statements about it. 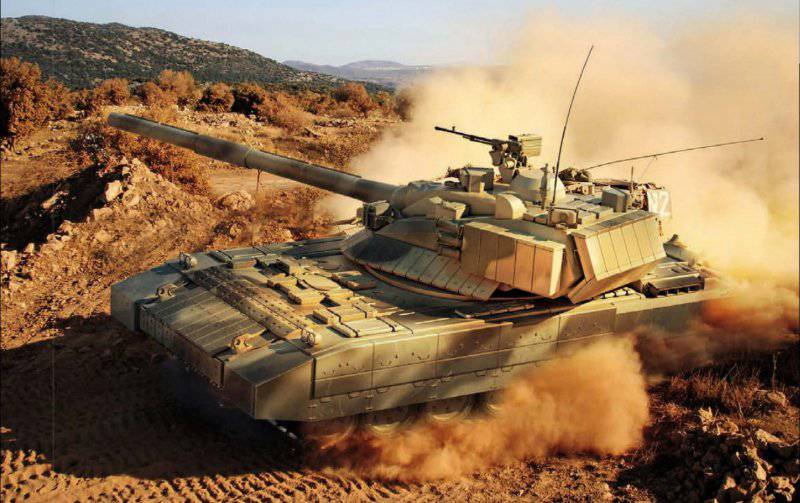 October 28 on the radio "Capital FM" released another issue of the author of the program Igor Korotchenko "National Defense". The guest of the program was Vyacheslav Halitov, deputy general director of the Uralvagonzavod corporation for special equipment. The host and guest of the program discussed a number of issues related to modern Russian and foreign armored vehicles, features of the international market, etc. Naturally, one of the topics of conversation was the new project "Armat".

The deputy general director of Uralvagonzavod noted that the characteristics of the promising Russian tank are still secret, but he spoke about some of its features. According to V. Khalitov, the Armat will be a tank of a completely new generation. There are no such cars in the world yet. This armored vehicle, attributable to the fifth generation, will not be a revolution in tank building, but it will be a serious step forward. The project implements previously created various ideas and solutions that significantly improve the performance of the combat vehicle. The calculations of specialists show the superiority of the "Armata" over the existing domestic and foreign tanks of modern types. Achieved an advantage in performance at the 25-30 percent level.

The task of creating electronic equipment designed to monitor the situation and search for targets, is both simple and complex. The new tank must quickly find and hit the enemy, performing a combat mission. To do this, according to V. Khalitov, the commander’s panoramic sight with enhanced characteristics and the gunner’s multi-channel sight will be used on the new tank. Such equipment should significantly reduce the time required to search for and destroy a target. All this will increase the tactical effectiveness of tanks on the battlefield.

The guest of the National Defense program said that the main task of the designers who developed the Armat tank was to increase crew safety. So, for additional protection of the crew, original layout solutions were used. To reduce risks, the crew "will not come into contact" with ammunition and fuel, as in modern tanks. The specialists of Uralvagonzavod studied a number of issues related to ergonomics and the convenience of the crew. For example, previously it was not possible to install air conditioners or similar equipment on combat vehicles. Within the framework of the “Armata” project, all necessary measures were taken to ensure comfortable work of the crew in various climatic conditions. The crew will be able to perform the assigned tasks for a long time without leaving their seats.

The deputy general director of Uralvagonzavod announced that the new tank Armata would receive a diesel engine. The specific type of the power plant and its power have not yet been named, however, V. Khalitov noted that the new Russian tank will surpass the existing domestic and foreign vehicles in specific power. The mobility of the tank will be provided by the engine of sufficient power. All this will allow to fulfill customer requirements in the person of the Ministry of Defense.

It has been repeatedly claimed that the Armat tanks will be shown to the public for the first time during the Victory Parade 9 of May 2015. V. Khalitov confirmed the relevance of these plans. A new domestic tank is still planned to be shown at the parade next year. In addition, the leaders of the corporation "Uralvagonzavod" intend to negotiate with the Ministry of Defense and present the machine "Armata" at the exhibition of weapons and equipment in Nizhny Tagil, which will be held in September 2015 of the year.

The host of the program I. Korotchenko reminded about the views of the country's leadership on the renewal of ground forces, which imply the construction of 2300 tanks of the new model. V. Khalitov did not comment on this figure, but said that the employees of Uralvagonzavod are currently making every effort to start the mass production of new armored vehicles. At the moment, the project "Armata" is at the stage of testing a prototype. Completion of tests is scheduled for 2015-16 years, after which the tank can be put into mass production.

Specialists of the corporation "Uralvagonzavod" and related enterprises are now engaged in increasing the level of protection. Various materials are being studied that can be used for booking advanced tanks. As protection both various brands of steel, and composite materials are considered. Already "there are solutions on this issue." V. Khalitov said that the crew of the "Armaty" will be protected much better than on existing tanks.

When asked about the reaction to the Armata tank and Russia's reputation as the leading manufacturer of tanks, V. Khalitov responded that, taking into account foreign developments and successes, we can talk about the superiority of Russian armored vehicles: , but everyone seems to be following. ”

Uralvagonzavod Corporation remembers the commitment to show the Armata tank at the Victory Parade next year. Employees of the corporation understand the complexity of this task, but do not forget about its responsibility. The deputy general director of the corporation said that every effort was being made. Tank builders have no right not to show their new development at the parade.

November 8, V. Khalitov gave an interview to the Russian Service radio station News". It again touched on certain aspects of the technical appearance of the new project. In addition, new information was announced that was not mentioned on the air of the radio “Capital FM”. So, the deputy general director of Uralvagonzavod announced the continuation of testing a prototype of a new tank. Tests confirm all the inherent characteristics.

Answering the question about weapons, V. Khalitov said that as the main weapons guns of various calibers are considered. The layout of the new “Armata” tank is based on a modular principle that can affect its armament, equipment, etc. At the same time, however, he did not name the specific type and caliber of the weapon.

In the context of the general characteristics of the perspective tank, a so-called one was mentioned. coefficient of military-technical level. This indicator allows you to analyze the capabilities of armored vehicles, integrating a number of its characteristics. In this comparison, the coefficient of the main tank T-72B is taken as a unit. According to calculations, for “Armata” this indicator reaches 4.

“Russian News Service” for the first time published details on the participation of new tanks in the Victory Parade next year. V. Khalitov said that, by the decision of the Ministry of Defense, two “boxes” of new tanks would participate in the parade. Most likely, each of them will have 6-8 tanks. That is the number of cars "Armata" will be built in the experimental party.

As before, most of the information about the new project, in particular the characteristics of the promising tank, was not announced. Nevertheless, in two interviews V. Khalitov mentioned rather interesting facts about the new development. In particular, he confirmed the previously mentioned deadlines for the completion of the various phases of the project. In addition, some features of the participation of tanks "Armat" in the future Victory Parade became known. A little more than half a year is left before the new parade on Red Square. Thus, only a few months remained before the “premiere” of the new Russian tank.

Ctrl Enter
Noticed oshЫbku Highlight text and press. Ctrl + Enter
We are
New information about the main tank T-14 "Armata"Uralvagonzavod today is not just a large machine-building plant, but a research and production corporation
Military Reviewin Yandex News
Military Reviewin Google News
230 comments
Information
Dear reader, to leave comments on the publication, you must to register.