November 12 2014
25
On November 4, the US Pacific Command, the Missile Defense Agency and the US Navy conducted regular tests of anti-missile systems. This time the task of the military was to intercept several targets. The last tests were carried out with the aim of checking the Aegis Combat Systems ship combat information and control system (CICS) and the missiles of new modifications. The tests are recognized as successful. 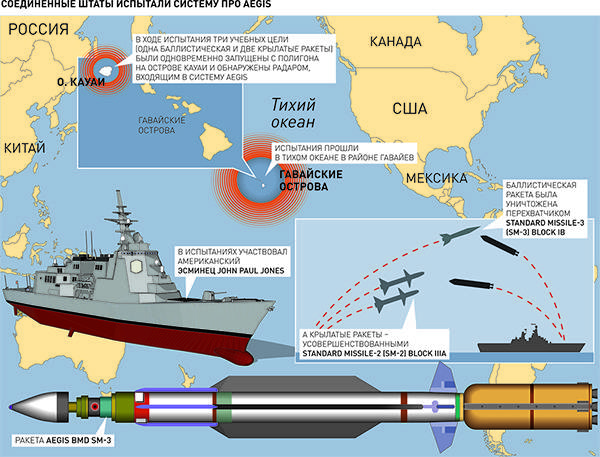 The destroyer USS John Paul Jones (DDG53) of the Arleigh Burke type was involved in the tests. The ship used the Aegis Ballistic Missile Defense 5.0 (Aegis BMD) system to track training targets and fire control. The combat mission for the ship was to detect and intercept three targets. From the Pacific Missile Range Facility (Hawaii), one ballistic missile and two cruise target missiles were launched. With the help of the AN / SPY-1 airborne radar, the destroyer detected and took on all three targets on time.

After entering the target area, the destroyer USS John Paul Jones (DDG53) launched interceptor missiles. To destroy a ballistic missile, anti-missile SM-3 Block IB was used, cruise missiles were attacked by SM-2 Block IIIA missiles. All three anti-missiles successfully reached their goals and destroyed them. Of particular interest is the SM-3 interceptor, which uses a kinetic method of destroying a target. The missile of this model is aimed at the target and collides with it.

The Aegis BMD anti-missile system has been tested since 2002. During this time, 35 tests were conducted. 29 intercepts for target missiles are considered successful. AT stories Modern US missile defense systems were 82-tested and 66-th successful interception of training targets. During the tests, 4 November collected all the necessary data that will allow further fine-tuning of the Aegis BMD system and other anti-missile systems of the American design.

In recent tests, upgraded versions of the combat information management system and antimissiles were used. According to reports, a number of developments and components, including the Aegis BMD 5.0 system, will be used in new ground-based missile defense systems. In addition, in the course of repair and modernization, new equipment will be available to ships already equipped with the Aegis system of previous modifications.

On the basis of the ship system, the land complex Aegis Ashore is being created. Next year, the first such complexes are planned to be deployed in Romania, where they will work within the framework of the Euro-Atlantic missile defense system. This purpose of the current work is a cause for concern. Over the past years, the United States and its European allies have been actively working to build a common missile defense system, which gives rise to claims from Russia.

Officially, the Euro-Atlantic missile defense system is designed to protect Europe from Iranian missiles. Nevertheless, in the time that has passed since the beginning of its discussion and construction, Iran has not been able to create rockets capable of threatening Europe and justifying the existence of anti-missile systems under construction. In this regard, the political and military leadership of Russia sees in the projects being implemented a threat to Russian security.

The fight against Iranian missiles will become an urgent task only in a rather distant future, but already now anti-missiles deployed in Europe can be used to reduce the combat capabilities of the Russian strategic nuclear forces. Washington and European capitals respond to Russian claims with statements that the missile defense system under construction is not directed against Russia. Nevertheless, all these assurances are still verbal in nature and are unlikely to become an official documentary position in the near future.

In the light of statements and disputes around the Euro-Atlantic missile defense system, the promotional materials on the Aegis system and the antimissiles used with it look particularly interesting. According to Rossiyskaya Gazeta, at a recent exhibition Euronaval 2014, held in France, the American defense enterprises showed an interesting poster, which depicted the combat work of the ship with the Aegis BIUS. According to the “plot” of this poster, a certain city was attacked by a Russian submarine, a ship, a MiG-29 fighter, and a container ship with the Club-K missile system, and the ship with the new CICS repelled the attack.

Naturally, any military equipment, including fictional, could be depicted on the poster, but taking into account the events of recent years, such advertising of new ship systems looks at least ambiguous. Nevertheless, advertising is advertising, and on the agenda there are more serious issues related to Euro-Atlantic missile defense and American developments in this area.

Warships with Aegis BIUS and Aegis BMD 5.0 antimissile system, SM-2 and SM-3 missiles of the latest modifications should be the maritime component of the US global anti-missile defense system. The use of Arleigh Burke-type destroyers and Ticonderoga-type cruisers will allow the US military to relatively quickly regroup the naval missile defense component and strengthen the defenses in the right direction almost anywhere in the oceans.

A gradual increase in the characteristics of control systems and antimissiles will increase the potential of the global missile defense, as well as expand its combat capabilities. According to reports, at present, the Aegis BMD 5.0 system and the latest modifications of interceptor missiles make it possible to fight medium-range ballistic missiles. In the future, it is planned to adopt new modifications of the missile defense system capable of intercepting intercontinental ballistic missiles. The emergence of such systems will greatly enhance the capabilities of the entire global US missile defense system.

The ability to concentrate forces in a certain direction, preparing for an enemy nuclear missile strike, significantly increases the potential of the missile defense system, since its components are not tied to a specific base and can be located almost anywhere in the world. Thus, to protect against Chinese missiles, the United States can concentrate ships with the Aegis BMD system in the Pacific, and some areas of the Arctic will be used to repel an attack from the Russian side.

Such capabilities of the sea missile defense component, as well as the deployment of certain facilities in Eastern Europe, once again confirm that the words about protection against Iran or North Korea are only an excuse, and the real target of US missile systems are Russian and Chinese missiles. In order to reduce the risks associated with delivering nuclear missile strikes, Moscow and Beijing need to take various measures aimed at countering the Euro-Atlantic and global US missile defense system.

In recent years, it has become clear that the Russian military and defense industries intend to fight the new threat in the form of the United States missile defense system by using so-called. asymmetric methods. This means that all new missile systems for strategic submarines or the Strategic Missile Forces are equipped with a set of means to overcome missile defense. According to various estimates, the anti-missile defense weapons currently used are highly effective and are capable of overcoming existing anti-missile systems.

The tests carried out in early November will allow American specialists to continue the improvement of the ship’s missile defense systems and the development of similar land-based systems. Next year, the Aegis Ashore systems should be deployed in Romania. Thus, recent tests of anti-missile systems in the very near future may lead to another deterioration of the situation in the international arena and aggravation of the situation in Eastern Europe.

Ctrl Enter
Noticed oshЫbku Highlight text and press. Ctrl + Enter
We are
Washington's fleets-pawns in the APR and Europe will be armed with long-range "6-Standards": the threat to the Russian and Chinese Navy doublesInnovation Day of the Southern Military District: airborne combat vehicle BMD-2K-AU
Military Reviewin Yandex News
Military Reviewin Google News
25 comments
Information
Dear reader, to leave comments on the publication, you must to register.