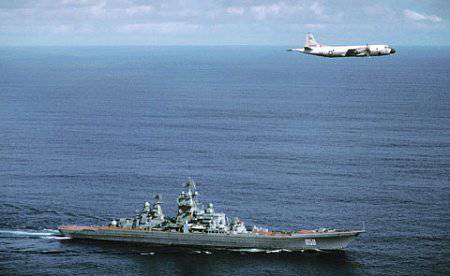 The idea of ​​creating surface ships with a nuclear power plant (AES) arose from the Soviet military-political leadership in the second half of the 1950-s. However, the first attempt traditionally came out lumpy: the development of the atomic ship of the air defense (project 81) and the atomic cruiser (project 63) was discontinued in 1957 and 1959, respectively.

The second time they tried to enter the same river in the middle of 1960, when the team of Leningrad TsKB No. 53 (then the Northern Design Bureau) was instructed to create an “inexpensive” oceanic atomic 8000-ton “watchdog”. Having an unlimited range of navigation, he had to ensure the combat stability of warship detachments, escort convoys, and perform search and escort with high efficiency and the destruction of the enemy SSBNs with the onset of hostilities. It was planned to build one such ship for each enemy SSBN, which in the end should have been 35 – 40 units.

However, it soon became clear: these plans are impossible. Mainly due to the high cost of the ship and the unpreparedness of the domestic shipbuilding industry to build such a series of nuclear ships of a sufficiently large displacement for those times. Nevertheless, work on the subject of a ship with nuclear power plants was continued as part of the creation of a large atomic anti-submarine ship (BOD) of the 1144 Orlan project.

Initially, it was planned to establish a promising universal missile system capable of hitting surface, submarine and even aerial targets; 57- and 76-mm artillery and rocket bombers, torpedo tubes and unmanned helicopter. Then added antisubmarine controlled complex weapons with missiles equipped with atomic depth bombs, or rocket-torpedoes.

Outline ship design finished in 1969 year, but 25 May 1971 year in stories the future of the Kirov-type missile cruisers should be a new turn. According to the new decree, the 1144 “Orlan” project was combined with the X-powered Exploration Project 1165 - the atomic missile cruiser, which had the main purpose of combating enemy aircraft-carrier and naval attack groups (the main armament of the ship

P-120, and then - 32 rocket P-700 "Granit"). At the same time, the atomic BOD, which was now assigned shock functions, now became the atomic anti-submarine cruiser, and later, in the 1977 year, it was transferred to a new class - the heavy atomic missile cruiser.

The development of the “united” project was left to the Northern PKB, the technical design was completed in 1972, and 26 in March of the following year, the lead ship of the series, the Kirov, was laid at the Baltic Shipyard in Leningrad. In the new role, the cruiser was intended to strike at the enemy's ship groupings (first of all, at carrier-based groups and formations); search, tracking and destruction of submarines, as well as the provision of zonal air defense of their forces.

The creation of such a large surface ship immediately caused a lot of problems, which is not surprising. The industry had to build not just big ships, but real “rocket battleships”, the standard displacement of which exceeded 24 KT, and the maximum length of the hull reached 251 m. For comparison, the maximum length of the Yamato battleship (the Japanese the giant was more than two times larger).

For the serial construction of 1144 cruisers at the Baltic Shipbuilding Plant, it was necessary to specially form a production line for the primary processing of sheet steel and a plasma line for cutting sheets of armored steel and thick stainless steel sheets for iron-water protection tanks, which required special surface cleanliness and edges. In total, only for the Kirov hull it was necessary to assemble and weld over 300 volumetric sections, a number of them - for 80 tons.

A nuclear power plant had to be created specifically for Orlan. The developers used a block layout scheme, which made it possible to reduce the dimensions of the NPP and improve its operational parameters, while the automatic cooling system was able to shut off the reactor even in the event of a ship tipping over.

An important feature of the main power plant of the Kirov cruisers was that along with the nuclear power plant there was also a backup power plant based on two steam boilers. Participants in those events claim that at a meeting on the development of the Project 1144 cruiser, the then Commander-in-Chief of the Navy, Sergei Gorshkov, asked the audience: “Can you imagine what will happen if both nuclear reactors“ fly ”in any South China Sea? What will be the blow to the prestige of the Soviet fleet? " The meeting resulted in the decision to install a backup non-nuclear power plant on the cruiser, capable of providing 17 knots with it.

Subsequently, the Orlans were built according to the improved 11442 design, in the same hull and with practically the same ship mechanisms, but with a different composition of weapons. Its structure gradually included the newest Dagger air defense missile system with under-deck vertical launch launchers (four eight-rocket “drums”), the Kortik anti-aircraft missile and artillery complex (six combat modules), the AK-130-MR-184 complex with a double-barreled 130-mm artillery installation, as well as the Vodopad-NK PLRK with rocket-torpedoes, used along with the usual 533-mm TA torpedoes or rocket-torpedo launchers (the PLUR common torpedoes and torpedoes were brought to 30 pieces), as well as anti-torpedo and anti-anti-torpedo defense systems RKPTZ-1 "Udav-1" with two 10-st Free 300-mm PU (120 RSL).

The last cruiser, Peter the Great, also received one complex.

C-300FM "Fort-M", characterized by extended defeat zones in range, height and lower boundary, as well as increased ability to intercept high-speed targets, including ballistic missiles, and increased channelity on the target and on the rocket.

It is believed that the "Kirov" and its sister-thorns should have been used as a core for the formation of ship search and attack groups or else to create the backbone of the guard forces of aircraft carrier groups formed on the basis of atomic aircraft carriers of the "Ulyanovsk" type. These groups could also include the Ural-type nuclear-powered reconnaissance ship with the Coral system.

However, until the collapse of the Soviet Union, only three Orlans were built — the fourth entered the fleet combat only in 1998. Atomic BRSK "Ural" has long been rusting in the Far East - in September of this year. announced a tender for its disposal costing about 1,2 billion rubles. As for the Ulyanovsk nuclear aircraft carrier, in the 1992 year, “in the infancy”, Ukrainian shipbuilders killed the money for easy money (by the way, they did not receive the promised orders).

During the period of completion of the last of the 1144 rocket cruisers, Peter the Great, at the Baltic Plant, the author of this material was a cadet at VVMU. Mv Frunze. At the time of the visits to the northern capital of the warships of foreign fleets from our school, liaison officers were appointed. One of these officers, who was in October 1994 on board the destroyer of the Glasgow patrol system, a veteran of the Falklands battle, who accompanied the royal yacht Britannia during her call to St. Petersburg (the yacht and the destroyer provided a state visit to Russia by Queen Elizabeth II) , told about the next remarkable episode.

During the passage of the destroyer by the plant of Peter the Great, which was stationed at the outfitting embankment, one of the British officers addressed a Russian colleague:

- You say that there are no battleships in the Russian fleet ...

- Yes. Now there is no, - not quite understanding the essence of the question, answered our officer.

- What is it then? - The Briton parried with some sarcasm, pointing to a giant ship sailing past.

- It? This is a missile cruiser.

- Cruiser ?! - It was the turn to be surprised by the officer of the fleet of Her Majesty. “Then how would you have a battleship?”

What did you actually want? Normal naval justice: someone has atomic aircraft carriers, and we have their killers. And also atomic.

The creation of the 1144 cruisers was not only and not so much a response to the challenge of the United States, as was the case with other Soviet military programs, as an objective necessity. As it seemed then, the Russian Navy needed a ship that could indefinitely — within its autonomy, of course — search, detect, and track enemy SSBNs in all areas of the oceans, and also possess sufficient combat potential to destroy large detachments of warships and carrier groups of potential adversary.

And in the end, the Orlan from a highly specialized ship transformed into a multi-purpose ship, becoming essentially the first domestic ship capable of equally effectively solving the tasks of fighting submarines, surface ships and enemy air attack weapons. Five designers of the Northern PKB were awarded the State Prize for the 1144 project, and the first ship commander, many sailors who took part in his ordeals, and industry representatives did not pass by the awards.

On the other hand, nuclear-powered cruisers like the Kirov became the swan song of Soviet shipbuilding, the final chord of the “doctrine of the giants”. Seriously podzatyanuvsya program fell victim to the harshest and uncompromising judges - time and scientific and technological progress, which left no room in the world's military fleets for huge battleship-like "white elephants" (example from the ocean - the death of the project 500-rocket "ship-arsenal") . As a result, sadly aware, today the place for “Orlan” remains, perhaps, only in the museum.

And the words about the museum is not a “joke of humor”. In order to patriotic education of the younger generation and preserve the memory of an entire era — the era of the Soviet Ocean Nuclear Missile Fleet — it seems to us that we must preserve one of its iconic ships as the main ship-museum of Russia. As it was done, for example, in the United States with several large warships, including aircraft carriers, or in France, where the strategic Redoubt bomber launched the watch. There are only two candidates left for such a megamuseum today - either the 1144 cruiser or the 941 submarine.