Israel will develop a missile defense system for ships

October 31 2014
16
An exhibition of naval armaments and Euronaval-2014 equipment opened in France on Monday. The pavilions of the exhibition demonstrate the latest developments in the field of naval forces, as well as announce plans and sign contracts for the supply of various designs. The Israeli company Rafael on the first day of the exhibition announced the start of work on a new system designed to protect against unguided rockets. This time, the missile defense system is intended for ships and boats. 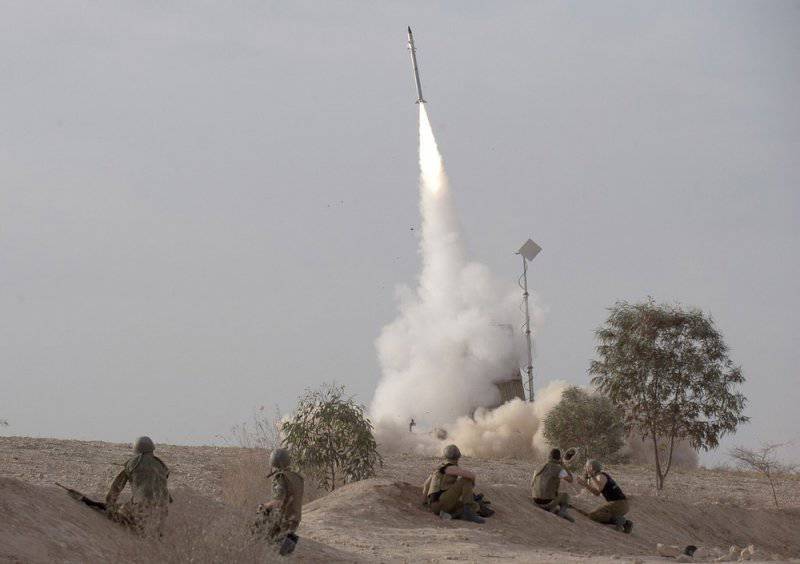 The new missile defense system received the designation C-Dome. This name of the project is due to the fact that it will be widely used developments on the anti-missile defense system Iron Dome ("Iron Dome", also known as "Kipat Barzel"). This complex has been in service with the Israel Defense Forces for several years now and has won a good reputation among the military. Now it is planned to finalize the land missile defense system and use it on various boats and ships of the naval forces of the client country.

According to the company Rafael, the C-Dome system is intended for arming patrol ships, corvettes and other surface ships with the exception of some classes of boats. The new complex will be used to repel enemy attacks using unguided missiles, including those launched by a volley. It is assumed that in the C-Dome complex, the developments and components of the existing Kipat Barzel system will be widely used.

The project of the ship's missile defense system is still in its earliest stages. Rafael specialists are working on various nuances of the new concept. weapons and determine the requirements for it, the implementation of which will ensure high efficiency of combat work. For obvious reasons, the technical details or characteristics of the future C-Dome system have not yet been announced and are unlikely to be published in the near future. Nevertheless, some common features of a promising missile defense system have already been announced.

It is alleged that the C-Dome complex will use a vertical launcher mounted below the deck of the carrier ship. The launcher will have up to 10 cells for transport and launch containers with interceptor missiles. Such architecture of the complex should ensure compatibility with ships and boats of various types. The interceptor missile is likely to be borrowed from the Kipat Barzel complex, but certain changes will be made to its design.

The radio-electronic systems of the base missile defense complex should undergo serious modifications. The Kipat Barzel / Iron Dome ground system has its own radar stations for detecting and tracking targets, as well as equipment for coordinating the actions of various elements of the complex and controlling its combat work. The C-Dome shipboard missile complex will not receive its own surveillance and control facilities. Specialists of the Rafael company intend to integrate anti-missile weapons into the ship’s electronic equipment. Thus, the detection of targets will be carried out using the ship’s full-time radar, and the ship’s fire control system will be responsible for the attacks.

The proposed concept of a promising missile defense system will protect the carrier ship and other vessels in the coastal zone and in the open sea. In addition, the C-Dome complex will be able to intercept enemy missiles approaching from any direction. According to representatives of the company Rafael, the interceptor missile of the C-Dome complex will have greater maneuverability, which will allow it to destroy various objects representing a danger to the carrier ship.

The use of developments under the Kipat Barzel project should simplify and accelerate the development of the ship's anti-missile system. It is expected that the first prototype of the C-Dome complex can be built in less than a year. Nevertheless, while the authors of the project are engaged in defining the requirements for a new missile defense system. Thus, negotiations began with the command of the Israeli Navy. During these consultations, Rafael would like to know the requirements of potential operators of the new system and develop it in accordance with them.

Rafael is only preparing to begin developing a ship-based missile defense system, and the Kipat Barzel system, proposed as the basis for it, has been used by the Israeli army for several years. Since 2011, the cities of Israel have been defending the Iron Dome missile defense systems. This system is capable of detecting and destroying ballistic missiles with a range of up to 70 km. Management of the complex is carried out in automatic mode, so that the reaction time is reduced to the minimum possible.

The Kipat Basel complex and several other anti-missile systems were built by Israel to protect against missiles launched from the Gaza Strip. The main objectives of the anti-missile system are unguided rockets of the Kassam family, produced in artisanal conditions from improvised materials. The low quality of the production of these munitions to some extent facilitates the work of the Kipat Barzel / Iron Dome complexes. Most of the missiles do not reach Israeli cities or fall outside of them. The automatic missile defense system of the missile defense system determines the trajectory of the flight of the enemy ammunition, calculates the point of its fall and gives the command to launch the anti-missile missile only if it represents a danger to the military or civilian population.

According to official data, to date, interceptors of the Kipat Barzel complex have destroyed more than 1200 enemy ammunition and have prevented them from falling on the territory of cities or military facilities. The high effectiveness of this missile defense system now allows for the protection of civilians, and in the foreseeable future should lead to the emergence of specialized ship systems for a similar purpose.

According to representatives of the developer, the first prototype of the C-Dome missile defense system can be built within the next year, after which it will begin testing. Due to this, new project reports may appear as soon as possible.

Ctrl Enter
Noticed a mistake Highlight text and press. Ctrl + Enter
We are
Innovation Day of the Southern Military District: Pictures from the ExhibitionThe action “Military service under the contract is your choice!” In Rostov-on-Don: future contract servicemen, exhibitions and “Russian Knights”
16 comments
Information
Dear reader, to leave comments on the publication, you must to register.