October 21 2014
45
TrackingPoint Company (Austin, Texas), known for its developments in high-precision small weapons, began selling a new line of rifles called Precision-Guided Semi-Auto. The weapon of a new series is completed with already known sights, automatically providing the calculation of amendments for firing. The main difference from the previous rifle complexes, the sale of which began several years ago, is the weapon used as their basis. Previously, the Precision-Guided complexes included rifles with a longitudinal sliding gate. The new series, as its name implies, uses self-loading rifles of several calibers. 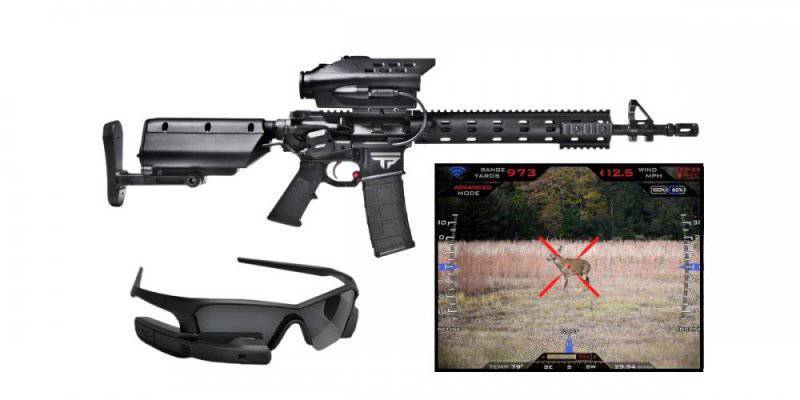 TrackingPoint sights, used in rifles of the new series, have long been known among shooters. As follows from the published data, when creating new self-loading rifles, the existing sights and auxiliary equipment were taken without any modifications and changes in the design. The main element of the complex is still a set of optical-electronic equipment mounted on the mountings of the receiver of the weapon. It has video cameras, electronics for signal processing, a liquid crystal display-eyepiece and a device for controlling the bend of the barrel. This unit is responsible for tracking the target, making amendments and implementing the shot.

In the butt of the new self-loading rifles is a unit for batteries. The lithium-ion batteries used ensure continuous operation of the sighting system for 4 hours. On the outer surface of the receiver, near the firing mechanism is a block of control mechanisms. It is designed to block the trigger by command of the sight. Finally, the trigger button has an automatic tracking button.

The principle of operation of the sighting devices TrackingPoint Precision-Guided is quite simple, but it was the Texan company that was the first to manage to bring such equipment to the market. As before, the shot is carried out according to an algorithm called Tag-and-Shoot (“Mark and Shoot”). In preparation for the shot, the shooter must aim the weapon at the target and place an aiming mark on it. Next, using the button on the trigger guard, the target is taken to auto-follow. According to the manufacturer, the new self-loading rifles with similar sights are able to automatically track targets moving at speeds up to 10-17 miles per hour, depending on the specific model of the weapon.

The TrackingPoint sight determines the distance to the target, as well as the direction and speed of the wind. Using the available information about the used ammunition in the memory and the collected data, the electronics automatically calculates corrections for firing and displays the aiming point on the screen. Next, the shooter must hold the trigger and thereby give the command to fire. At that moment, when during the oscillations of the weapon (due to the hand-shake of the shooter and other external factors) the recommended aiming point coincides with the target, the automated sight sends a command to unlock the firing mechanism. Shot occurs.

As part of the new Precision-Guided Semi-Auto range, three rifles with different characteristics are available. This weapon is equipped with similar sighting equipment, the differences are due only to the used ammunition. Accordingly, each of the three rifles is equipped with an automated sight, adapted to work with its cartridge.

The first of the three rifles presented is the Precision-Guided Semi-Auto 5.56. This weapon is built on the basis of the famous AR15 platform and has a number of characteristic features inherent in it. At the same time, TrackingPoint engineers made some adjustments to the design of the base rifle associated with the use of original sights. So, the rifle is equipped with a butt with a built-in battery compartment, the trigger guard is enlarged to set the target pickup button for tracking, and on the right surface of the receiver there is a lock of the trigger mechanism.

The Precision-Guided Semi-Auto 5.56 rifle uses the 5,56x45 mm NATO cartridge and is equipped with a TrackingPoint sight, designed to work with this ammunition. The maximum range of shooting using automation - 0,33 miles. You may hit a target moving at speeds up to 10 miles per hour. At maximum range, fire accuracy up to 0,047 MOA is ensured. The scope has a digital zoom from 2x to 14x. To carry out all the necessary calculations, the sight takes about 1 seconds. All data about the shot and the image can be transmitted to a third-party device wirelessly Wi-Fi 802.11G.

TrackingPoint provides customers with a three-year warranty on all components of the rifle, including the barrel. Declared a regular update of software sighting equipment. The Precision-Guided Semi-Auto 5.56 rifle is available for order from October 1. Like other products of the Texas company, the new rifle is distinguished not only by its high performance, but also by its extraordinary price: in order to acquire it, you will have to part with 7495 US dollars.

The second rifle of the family - Precision-Guided Semi-Auto 7.62. This weapon is also built on the basis of the AR15 platform, however, it is intended for the use of rifle cartridges 7,62x51 mm NATO. The architecture of the rifle is the same as that of other weapons of the family: it is equipped with a butt with a battery compartment, an automated sight and a number of other equipment.

For use with a cartridge caliber 7,62 mm proposed TrackingPoint sight with the appropriate settings. The Precision-Guided Semi-Auto 7.62 rifle's maximum range is limited to 0,5 miles. Shooting is performed on a target moving at speeds up to 15 miles per hour. Accuracy is declared at the level of the previous family rifle - up to 0,047 MOA. Electronic components of a sight allow to establish increase in limits from 3х to 21x.

Terms of delivery and warranty of all rifles of the new line are the same. At the same time, the Precision-Guided Semi-Auto 7.62 rifle is significantly more expensive than the “younger” model of the caliber 5,56 mm: it costs 14995 dollars.

The oldest and most expensive rifle of the new line was Precision-Guided 300 WM Semi-Auto. This weapon uses .300 Winchester Magnum cartridges (7,62x67 mm) and has higher performance compared to two other rifles. The maximum effective range of the rifle chambered for .300 Win Mag is declared at the 0,5 mile level. The maximum target speed reaches 17 miles per hour. In terms of other characteristics, the TrackingPoint automated rifle sight for the Precision-Guided 300 WM Semi-Auto rifle is similar to that used in the Precision-Guided Semi-Auto 7.62.

The Precision-Guided 300 WM Semi-Auto rifle is the most powerful weapon in the new line and costs accordingly. TrackingPoint set the price in 18995 dollars.

From the beginning of October to the end of November, TrackingPoint holds an advertising campaign aimed at supporting two new projects at once. All customers of new self-loading rifles with automated sights receive as a gift special ShotGlass glasses that can work together with sighting devices.

The device ShotGlass is a glasses with a set of special equipment. Perhaps the most interesting element of the glasses is a miniature display located in their right side. It is argued that the proportions of the image displayed by the display are equivalent to a monitor with a diagonal of 30 inches. In addition, the glasses are equipped with an HD video camera, microphone and speaker for recording and playing sound. ShotGlass glasses software is based on the Android operating system.

Special glasses for shooters from the company TrackingPoint while you can not buy. The device will go on sale in March next year. The estimated price of the product listed on the manufacturer's official website is 995 dollars.

Recent ones news and press releases suggest that TrackingPoint intends to continue to develop new rifle systems using smart designs of its own. In addition, other devices should appear in the company's product line for shooters who prefer modern electronics for various purposes. The stated characteristics of weapons and support systems look interesting and promising.

Despite the high performance, it is safe to assume that the rifles of the Precision-Guided Semi-Auto family will not be widely used. With all the advantages, the proposed rifle complexes, as well as TrackingPoint's previous developments with a longitudinally sliding gate, have a serious disadvantage - high cost. The budget in 7,5, and even more so 19 thousand dollars allows the shooter to choose from a large number of rifles of various models from different manufacturers. In addition, not all shooters are interested in acquiring weapons with an automated sight, especially for so much money.

However, new TrackingPoint rifle complexes will definitely find a buyer and will be able to realize their potential in a shooting range or hunting ground. Naturally, the rifles of the Precision-Guided Semi-Auto family cannot be compared in number with other weapons of their class. However, they can become quite popular in their narrow niche of precision weapons.