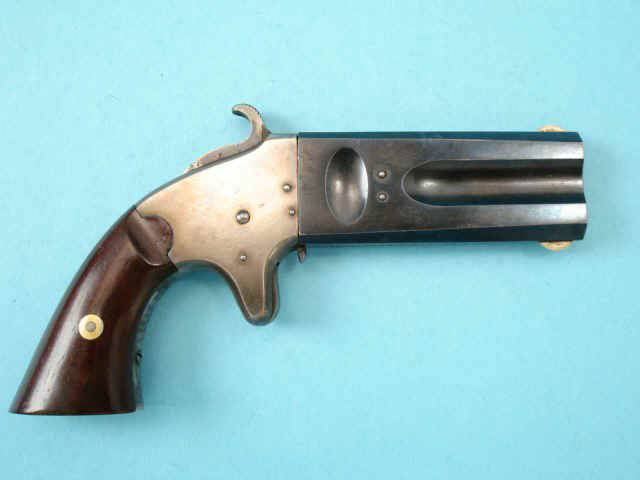 The design of the gun is based on patents obtained by Henry F. Wheeler (31 October 1865 of the year Henry F. Wheeler, 7 19 of the year and June 1866). The patents described the mechanism of locking the weapon, as well as the construction of the block of barrels combined in such a way that it allowed to use cartridges of one caliber in one barrel, and cartridges of another caliber in the second. Sometimes a gun is called a double-barreled gun by Henry Wheeler. 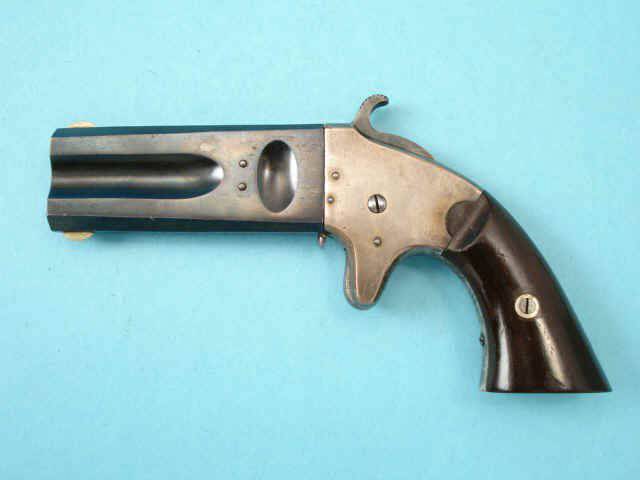 Henry Wheeler's double-barreled pistol - American Arms Double Barrel Derringer consists of a frame with a handle, details of a firing mechanism, a barrel unit (pair of barrels) and handle cheeks. The frame is made of silver plated brass. Most often pistols are found in which one of the barrels is chambered for the .22 caliber cartridge of the ignition ring, and the second barrel for the .32 caliber cartridge is also of the ignition ring. These guns are conventionally called the American Arms Double Barrel Derringer of the first variety. 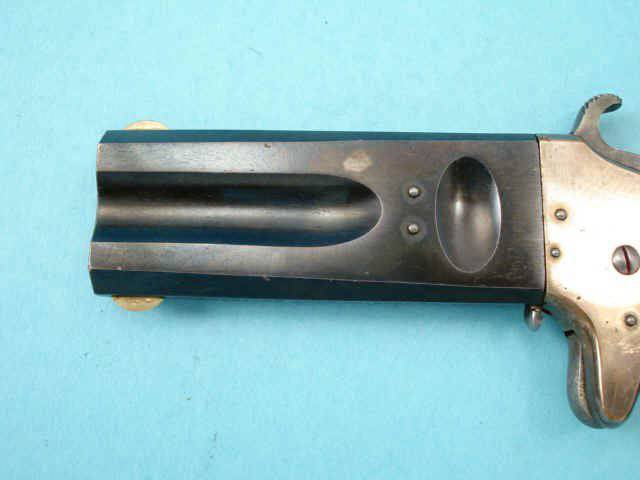 The block of American Arms Double Barrel Derringer trunks is designed as a single piece. Trunks blued, length of barrels 76 mm, total length of weapon 178 mm. On the side surfaces of the barrel unit there are longitudinal grooves designed to facilitate weapons. In the area of ​​the cartridge rooms there are transverse grooves of an oval shape, facilitating the retention of the barrel unit when turning and reloading the stems. 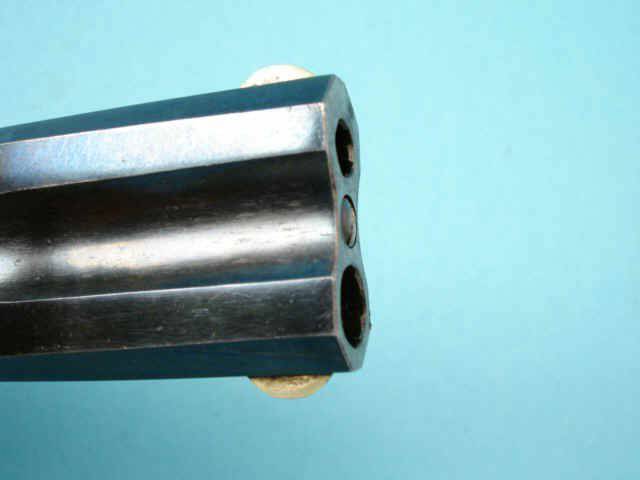 Flies oval-shaped installed on both sides of the block trunks. Section trunks resembles an octagon. The central axis, on which the block of barrels is fixed, sometimes passes through and is visible on the surface of the muzzle. 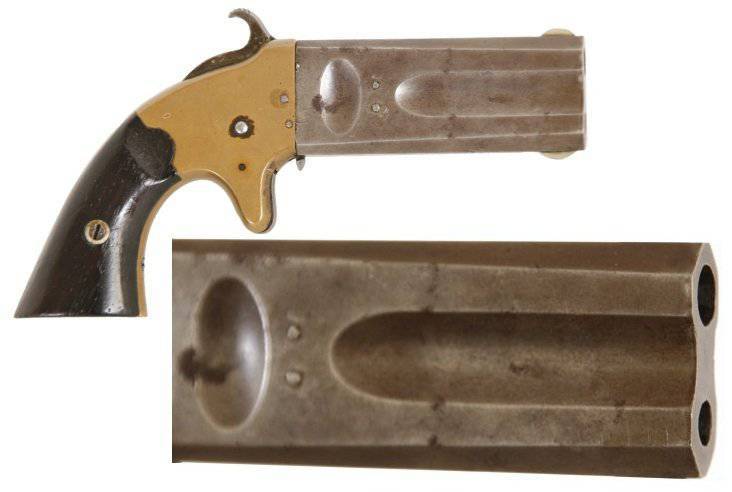 On some pistols, the axis is not visible from the side of the muzzle of the weapon. Perhaps these are pistols of an earlier release period. 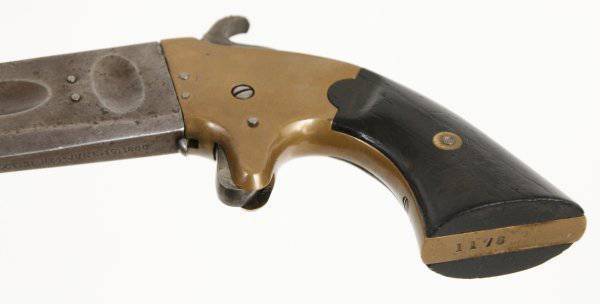 Single-action pistol trigger. The shock mechanism consists of a trigger with a curved needle and a mainspring. The trigger mechanism of the spring and the nipple descent, hidden in the stowed position in the lower tide of the frame. At the bottom of the frame in front of the trigger there is a latch. After pressing the latch, the stem block can be rotated at any angle relative to the axis on which the receiver is fixed. 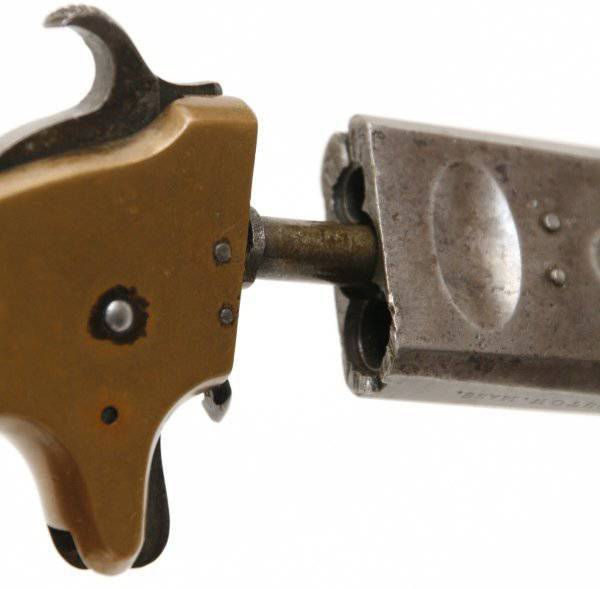 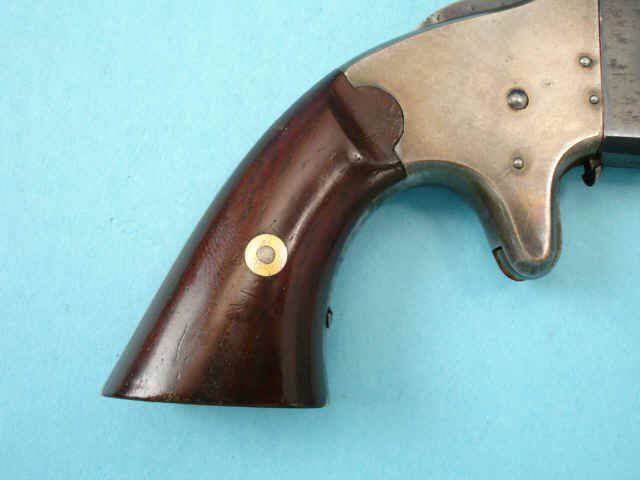 The handles of the American Arms Double Barrel Derringer pistols of the first variety have a simple, so-called “square” shape and look like the arms of revolvers. The cheeks of the handles are made of palisade wood and are attached to the frame with a screw. The head of the screw is located in the left cheek. A brass nut is mounted in the right cheek. 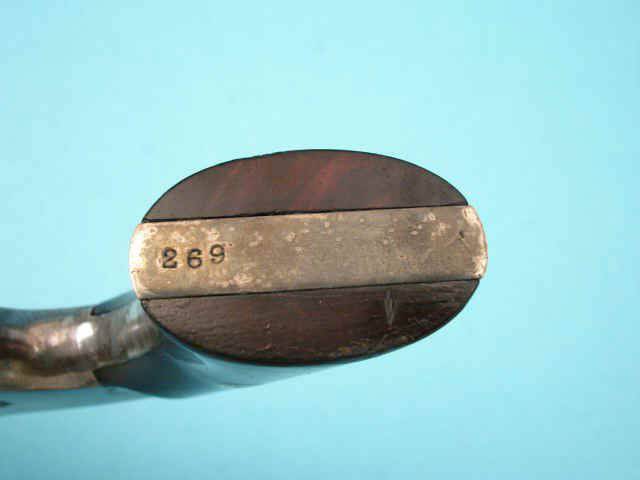 The serial number of the double-barreled rotary gun of the American Arms company is marked on the bottom of the handle. 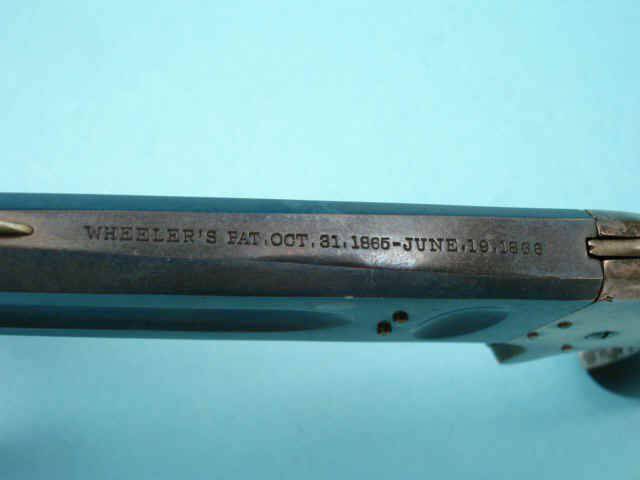 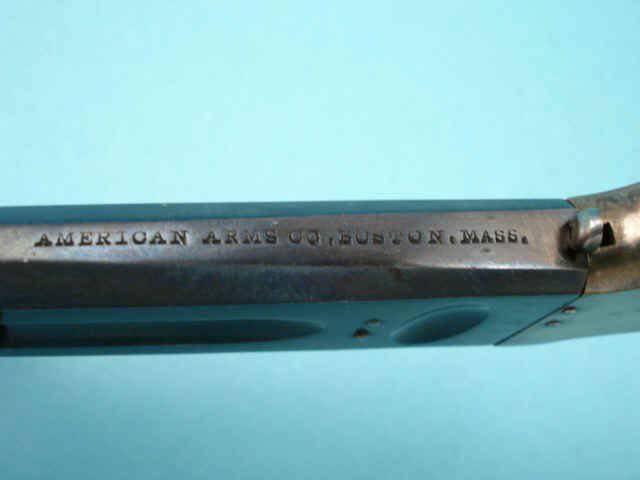 On the surface of the second side of the barrel unit there is a marking indicating the place of manufacture of the weapon and the manufacturer: “AMERICAN ARMS CO. BOSTON. MASS. ” 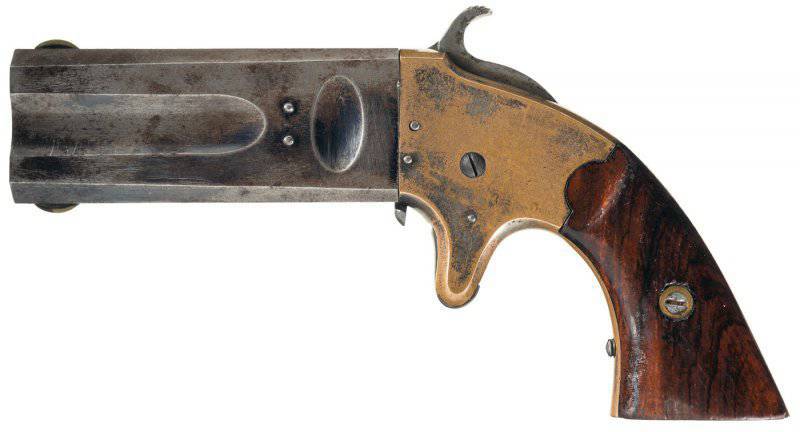 Other varieties of double-barreled pistols of the American Arms company differ in the caliber and shape of the handle. With increasing caliber, respectively, increased the dimensions of the weapon. The handles could be made from rosewood or walnut.

The American Arms Double Barrel Derringer of the second version has a barrel unit in which both barrels are made for .32 RF caliber cartridges. Pistols of this variety were produced with handles only the usual "square" shape. The barrel lengths of these pistols, as a rule, are 76 mm, but occasionally there are shorter ones. 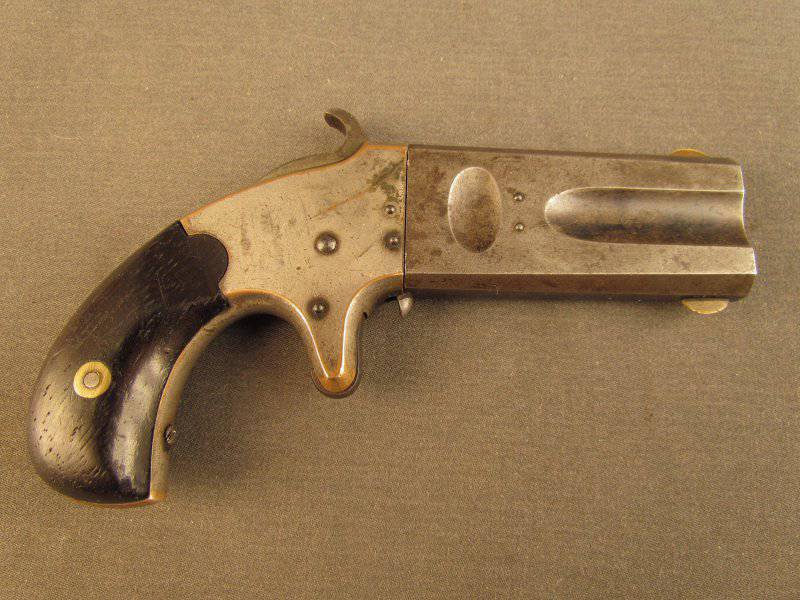 Pistols of the American Arms Double Barrel Derringer of the third version were produced with both trunks of the .32 RF caliber. The usual barrel length of the pistols of this variety is 67 mm. Pistols with 76 mm barrel length are quite rare. 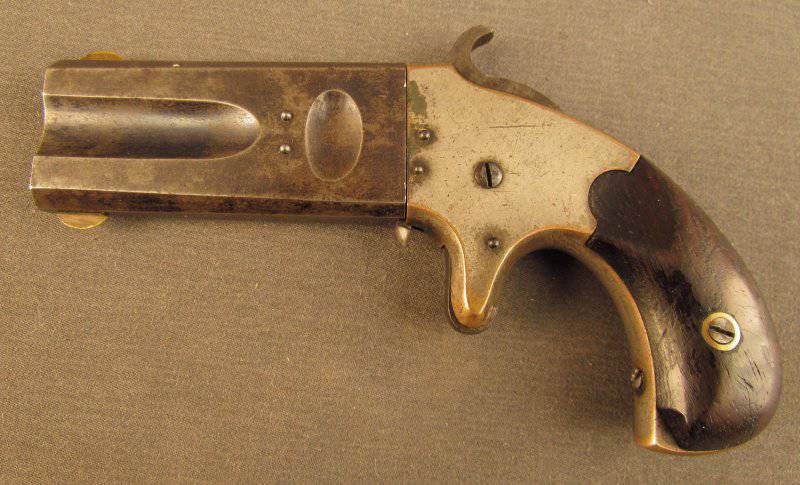 The shape of the arms of these pistols resembles the head of a bird, due to the bending of the back of the handle. 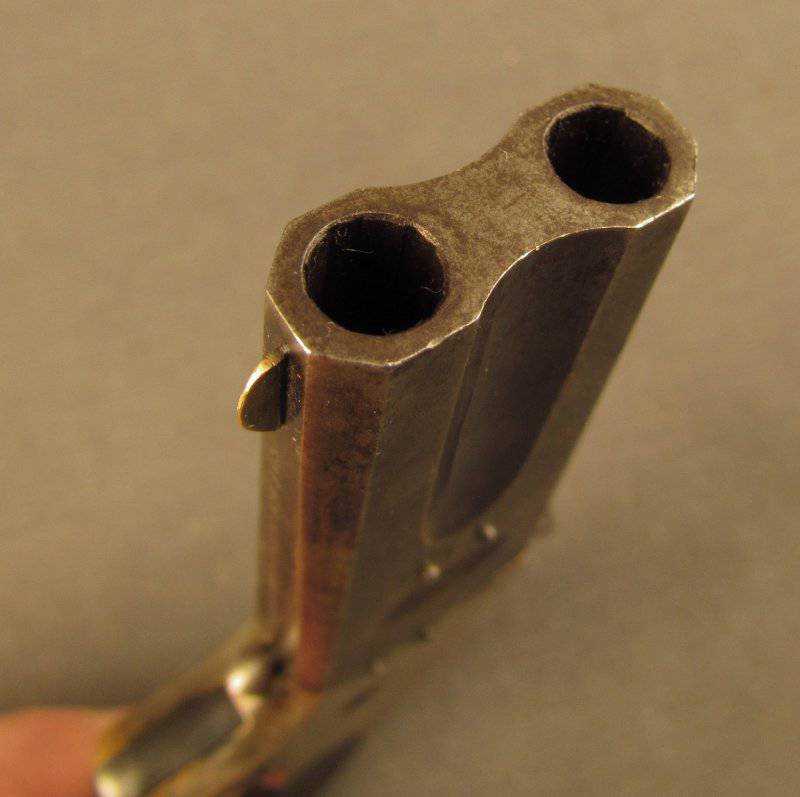 Each of the trunks had five rifling. In the front section of the receiver unit, the end of the axis is not visible. 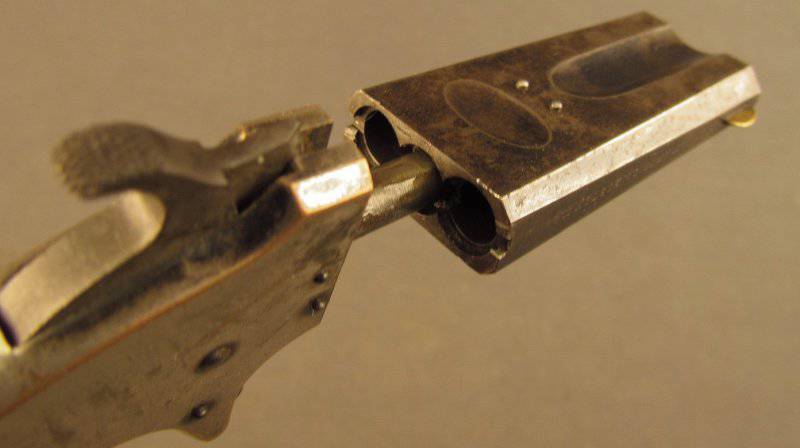 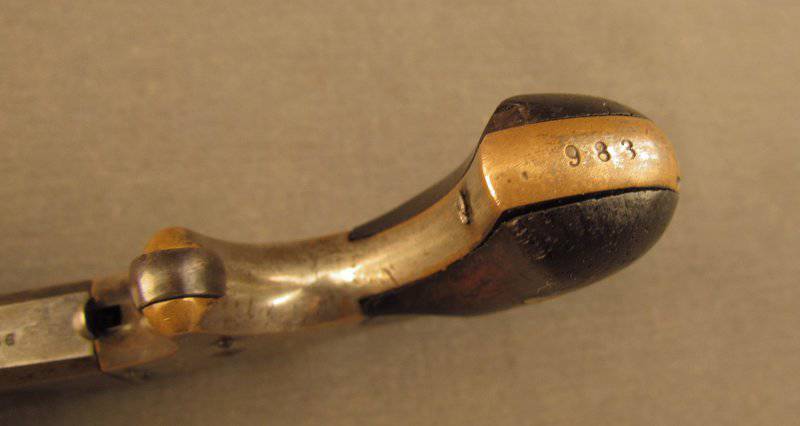 This variety has no other fundamental differences and is similar to other varieties. The serial number of the pistol was also put on the lower part of the handle. 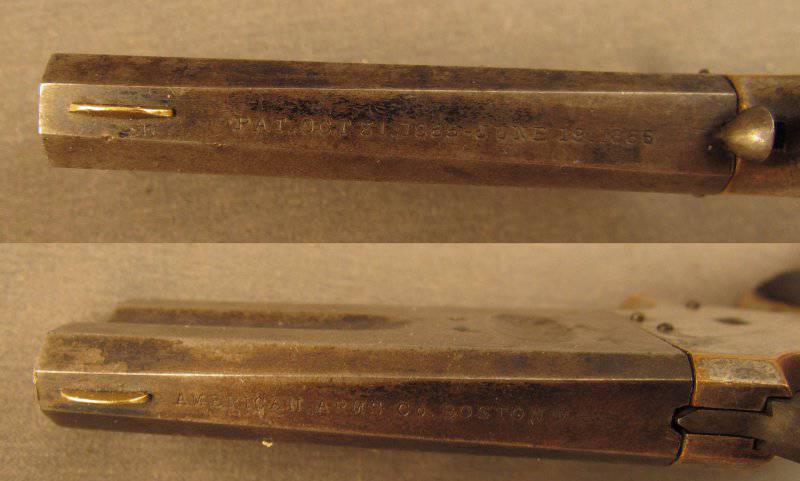 Pistols with a barrel length of less than 76 mm have some feature in the marking. On one side of the receiver, the alphanumeric text "PAT. OCT. 31. 1865 - JUNE. 19.1986" is applied, i.e. in the labeling of shorter stems the word “WHEELER'S” is missing. And this applies not only to this type of pistols, but also to other types of double-barreled pistols of the American Arms company. 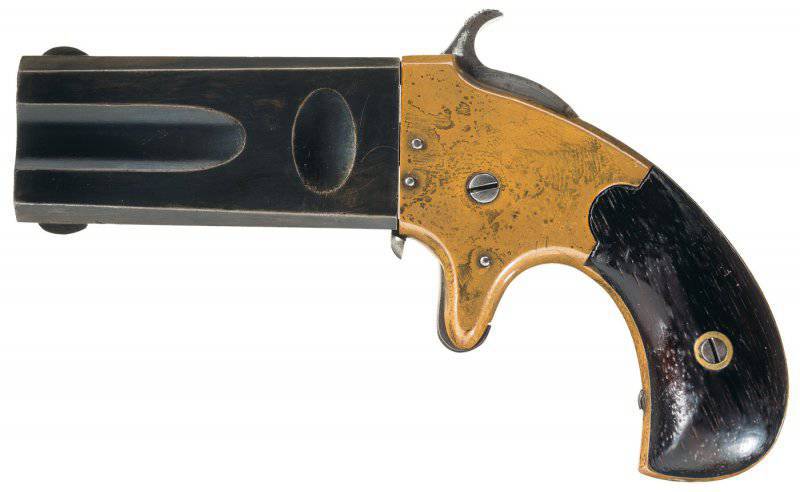 The fourth type of American Arms Double Barrel Derringer had both .38 RF barrels. These pistols were produced only with handles having the shape of a bird’s head and 67 mm long barrels. Pistols with .38 RF barrel caliber were released very little. 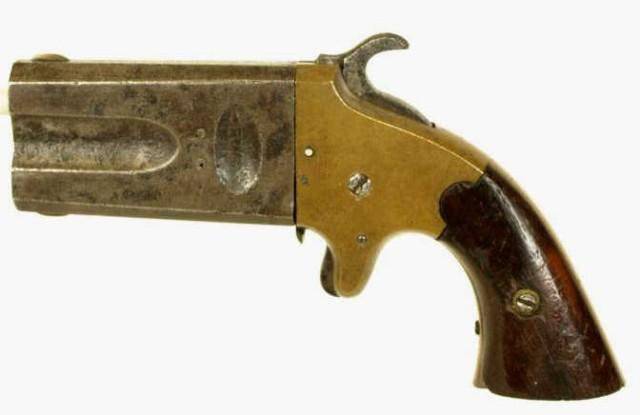 The last fifth variety had the caliber of both .41 RF barrels. The pistol grip of this variety was in the form of a simple, so-called "square" form. 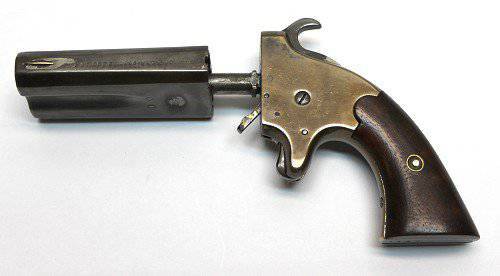 American Arms Double Barrel Derringer pistols were manufactured between 1866 and 1878. According to rough estimates, approximately 5000 copies of pistols of all varieties were released. The price of these weapons at auctions in Europe can reach 2000-3000 dollars. In the US, the gun can be purchased depending on the state for 500-1400 dollars.