October 16 2014
43
In recent months, the supply of French amphibious ships of the Mistral project has been actively discussed. At the same time, the construction of the 11711 project head landing ship is being completed in Russia. The large landing ship (BDK) "Ivan Gren" is being built since 2004, and its delivery is scheduled for next year. According to domestic media reports, construction of the second BDK project 11711 will begin in the foreseeable future. 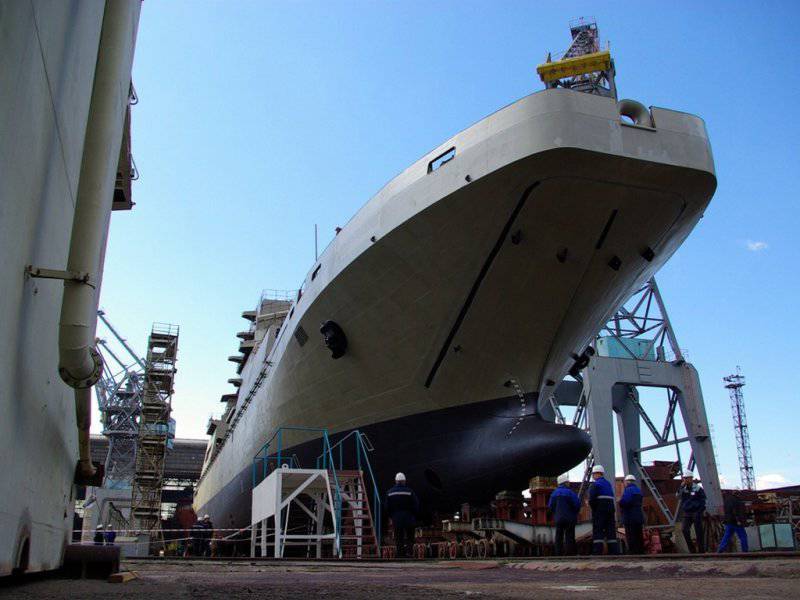 A few days ago, the TASS news agency published excerpts from an interview with the General Director of the Nevsky Design Bureau (PKB) Sergey Vlasov. S. Vlasov spoke about the construction of the head BDK project 11711, as well as future plans for ships of this type.

Last summer, it was claimed that the Ivan Gren ship would be completed, tested and handed over to the naval the fleet by the end of 2014. According to S. Vlasov, to date, the final cost of the new BDK has been determined, and the deadlines for completing all the required work have been set. The ship is planned to be delivered to the customer next year.

Simultaneously with the completion of work on the lead ship of the project, the Navy and the Neva PKB are preparing to build a second BDK of a new type. The decision to build the second ship of the 11711 project has already been made. According to the general director of Nevsky PKB, the second ship will be built according to the original 11711 project with some modifications made during the construction of the BDK Ivan Gren. In addition, some other changes will be made to the project regarding the components and equipment used.

The main issue to be resolved by designers of the Nevsky PKB concerns imported components. In the light of current events in the international arena, it is required to minimize the number of components supplied by foreign partners. For this reason, engineers are currently finalizing the original 11711 project to meet the new requirements for the origin of components. According to S. Vlasov, there were very few foreign components on the lead landing craft of the draft of the foreign components, and besides, they were all delivered earlier. As a result, issues of import substitution are solved only for the second ship.

At the moment, the problem of replacement of imported components is one of the most difficult. BDK project 11711 need a number of special equipment, previously ordered abroad. Replacing some systems is associated with certain difficulties. So, problems arise with the choice of suppliers of refrigerating machines and bilge and wastewater treatment plants. Nevertheless, as the general director of Nevsky PKB said, domestic manufacturers have already been found who can supply bilge water purification systems and furnaces for waste disposal.

It should be noted that the construction of the second BDK project 11711 will in fact be continued, and will not start from scratch. Several years ago, some work was carried out, in particular, several sections of the hull of this ship were laid. However, due to problems with the head BDK "Ivan Gren", it was decided to suspend all work. As follows from the words of the general director of the Nevsky PKB, the Ministry of Defense decided to resume construction and provide the fleet with new BDK project 11711.

Large landing ships of the 11711 project were to be a further development of the 1171 BDK project and were created on their basis. It was originally planned to build six ships of this type, but their actual number may be different. The decision on a series of new BDKs should be made based on the results of the test of the lead ship.

BDK project 11711 should have a displacement of 5 thousand tons, the total length of 120 m, maximum width of 16,5 m and draft of 3,6 m. Ships are proposed to equip the diesel power unit with a power 4000 hp Diesel engines must provide travel speeds up to 18 knots and cruising ranges to 3500 nautical miles. The claimed autonomy for fuel and food stocks is 30 days.

The armament complex of the 11711 BDK project consists exclusively of artillery systems. The main weapons ships should be an AK-176 artillery mount with a 76 caliber mm gun. It is proposed to carry out air defense using two AK-630М installations of 30 mm caliber. For fire support of the landing force, ships are equipped with two launchers of the Grad-M A-215 multiple rocket launcher system. The ships can carry one Ka-29 helicopter and ensure its operation.

Landing units and equipment should be located on tank deck inside the ship’s hull. Depending on the task, the BDK project 11711 can carry up to 300 people, up to 13 main tanks, up to 36 armored personnel carriers or 20 20-foot containers. Loading equipment can be carried out through the nose ramp or through the four-wing hatch in the deck. In the latter case, the ship must use a cargo crane. For work with boats and boats there are two boat cranes. During the landing, the hatch in the deck is used to ventilate the internal volumes of the ship to prevent them from filling with exhaust gases.

Currently, Nevskoye PKB is working on the issues of changing the 11711 project due to the required import substitution, and is also working on new projects. Specialists in their own initiative are engaged in the creation of a project for a prospective BDK. Materials on this project are supposed to be submitted to the command of the Navy, which will determine its further fate. 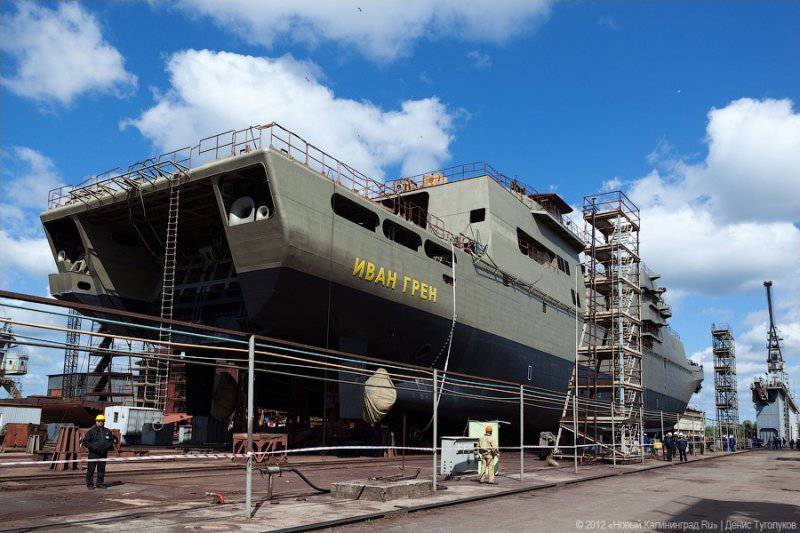 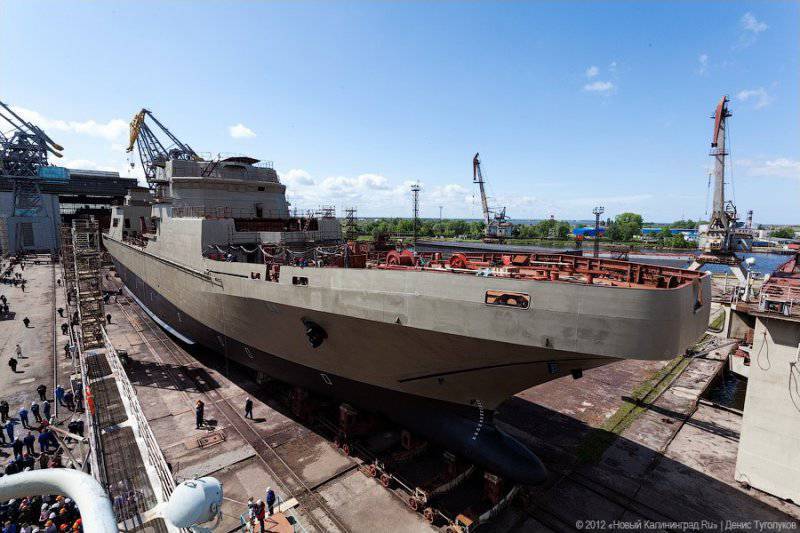 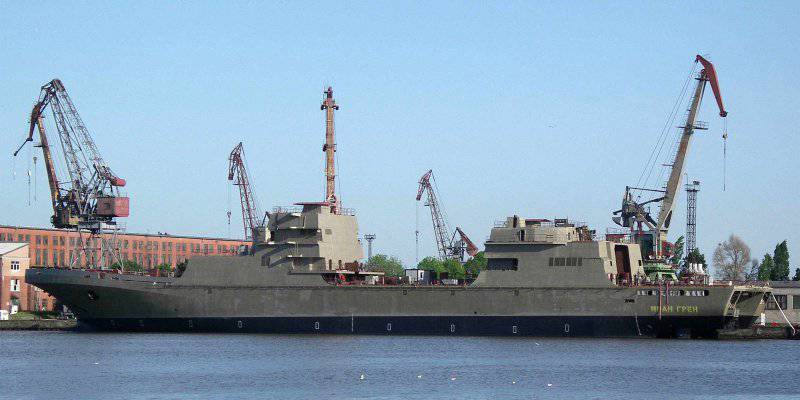 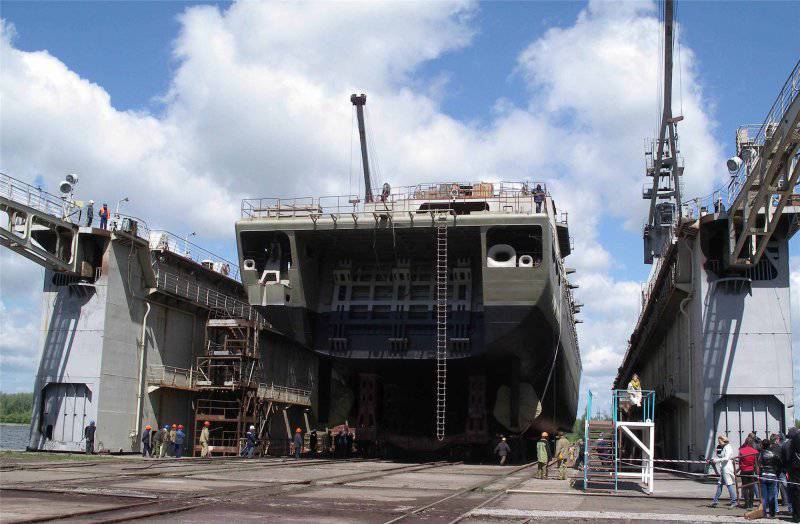 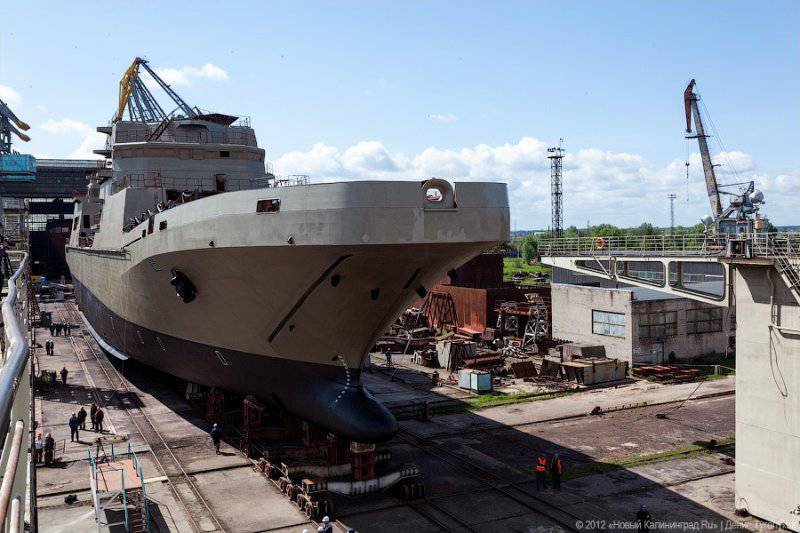