October 16 2014
2
At the end of 1969, the USSR Council of Ministers issued a decree on the commencement of work on new anti-submarine missile systems designed to arm submarines. The development of new systems was commissioned by OKB-9 (now Novator OKB). In accordance with the resolution of the Council of Ministers, the engineers of the OKB-9 had to develop two anti-submarine complexes - RPK-6 "Waterfall" and RPK-7 "Wind". The main designer of both projects was L.V. Lyulyev. 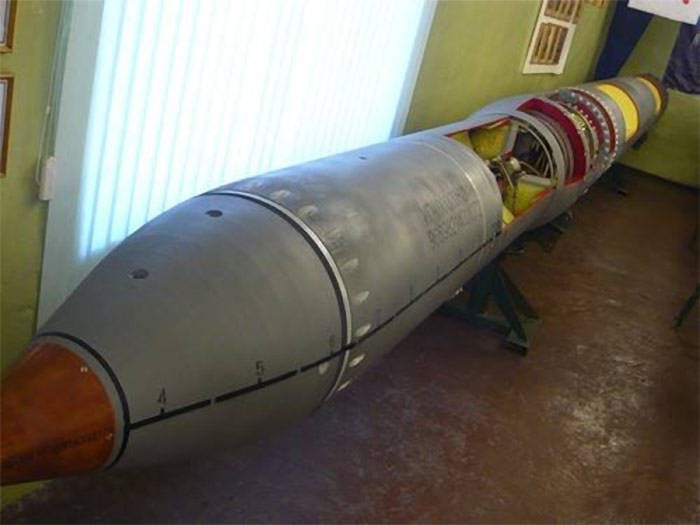 Missiles complexes "Waterfall" and "Wind" were to be launched through standard torpedo tubes of submarines. For this reason, OKB-9 commissioned the development of two anti-submarine ammunition. The RPK-6 complex was intended for armament of submarines equipped with 533 mm caliber torpedo tubes, and the RPK-7 complex was proposed for use on submarines with 650 mm torpedo tubes. The restrictions imposed by such launching devices seriously affected the appearance of the new anti-submarine missile, but allowed it to provide fairly high performance.

Similar requirements for the RPK-6 and RPK-7 complexes affected their appearance. In both complexes it was proposed to use the same ideas and technical solutions. For this reason, "Waterfall" and "Wind" with certain reservations can be considered as systems of the same family or modifications of the same complex, modified for use on different submarines.

In the framework of the RPK-7 “Wind” project, OKB-9 specialists developed two guided anti-submarine missiles, the 86P and 88P, at once. The missiles had a similar design and differed in the warhead. Thus, the 86P product was to be equipped with the UGMT-1 compact torpedo, created at the Uran Scientific and Production Association. The 88P rocket in a certain sense became the successor of the ideas embodied in the very first domestic systems of its class: it was proposed to equip it with a nuclear warhead made in the form of a depth bomb.

Both missiles of the "Wind" complex had a hull with a maximum diameter of 650 mm and a length of 11 m. The launch weight of the ammunition is about 5,5 tons. The 86P and 88P products had a cylindrical body of variable diameter. The head part, which contained the warhead, had a slightly smaller diameter than the tail section, in which the engine was located. On the tail part of the body were latticed steering wheels, displayed after exiting the torpedo tube.

Like other Soviet anti-submarine missiles, the munitions of the RPK-7 Veter complex received a solid-fuel rocket engine. Since the 86Р and 88Р missiles were supposed to be launched from a submerged position, the engine had two modes of operation: the starting and the sustainer. The first provided the exit of the rocket from the water, the second - the flight to the target area.

Early anti-submarine missiles were uncontrollable, which resulted in insufficient accuracy of delivery of the warhead. For this reason, the rockets of the Vodopad and Veter complexes were equipped with a control system developed at SRI-25. The inertial guidance system provided the launch of the missile to the area specified by the operator of the complex. To control the rocket in the water and in flight, the guidance system used four trellis booster.

According to some sources, the used solid-fuel engine in flight accelerated the rocket to supersonic speeds and provided a firing range of at least 70 kilometers. More detailed data on the speed and range of missiles 86Р and 88Р are not available.

According to the method of use, the anti-submarine missile system RPK-7 "Wind" was similar to the RPK-6 "Waterfall", created at the same time as it. Before launching the rocket, the crew of the submarine had to determine the location of the attacked target. For this purpose, submariners could use hydroacoustic systems of a submarine or data obtained from external sources: surface ships, anti-submarine aircraft or helicopters, etc. Based on these data, the equipment of the submarine calculated the flight task and entered it into the missile guidance system.

The missiles of the "Wind" complex were placed in a torpedo tube and pushed out by compressed air, like torpedoes of the appropriate caliber. At some distance from the submarine, the 86P and 88P missiles were laying out the rudders and starting the engine, which for several seconds worked on the starting mode. The starting mode of the engine provided a rocket exit from the water and a rise to a certain height above it. After that, the power plant switched to the marching mode. The flight to the target by air was carried out along a ballistic trajectory. In a given area, at the command of the guidance system, the rocket had to drop the warhead, which was assigned to destroy the target. The rocket itself fell into the water and collapsed.

The 86P rocket carried a warhead in the form of a UGMT-1 compact torpedo with a parachute system. After being dropped from a rocket, the torpedo was supposed to sink into the water on a parachute, and then, dropping it, sink to a predetermined depth. Acoustic active-passive guidance system made it possible to detect the target at a distance of 1,5 km. After diving to the desired depth, the torpedo began a circulation target search; finding it, the ammunition began to attack. A torpedo with a length of 3,4 m. Caliber 400 mm had a total weight (with parachute system) 720 kg and carried 60 kg of explosive.

The principle of operation of the warhead of the 88P rocket was much simpler. The rocket, having flown to a given area, dropped a nuclear depth bomb. The latter plunged to the prescribed depth, was undermined and hit enemy submarines within a radius of several kilometers. Accurate data on the power of the warhead and, as a result, on the radius of guaranteed destruction of targets are missing.

Tests of anti-submarine systems developed by OKB-9 in the early seventies were carried out using two experimental submarines converted according to project 633RV. The first of them, S-49, has been used since 1973. The second, C-11, began testing nine years later. With the help of these two submarines, specialists of OKB-9 and the naval fleet carried out refinement and all stages of testing a new missile system.

Anti-submarine missile complex RPK-7 "Wind" was adopted by the Navy of the USSR in 1984 year. According to reports, the 86P and 88P missiles can be used by all domestic multi-purpose atomic submarines equipped with 650 mm torpedo tubes. These are the submarines of the 67РТМ “Pike”, 949А “Antey”, 971 “Pike-B” projects, etc. The change in the military-political situation led to the abandonment of 88P missiles carrying a nuclear warhead. In the arsenal of submarines there were only anti-submarine missiles 86Р with a warhead in the form of a torpedo UGMT-1.

The gradual reduction of submarines carrying 650-mm torpedo tubes affected the operation of the Wind missile system. Submarines of the latest projects being built for the Russian Navy are equipped only with 533 mm caliber torpedo tubes, which makes it possible to speculate about the future of anti-submarine missile systems. Probably, such a change in the armament of modern submarines will lead to the fact that the RPK-7 "Wind" rocket complex will gradually be withdrawn from service and give way to newer systems, for example, anti-submarine missiles of the Caliber family.