History of the Bulgarian Air Force. Part of 3. Postwar period and modernity 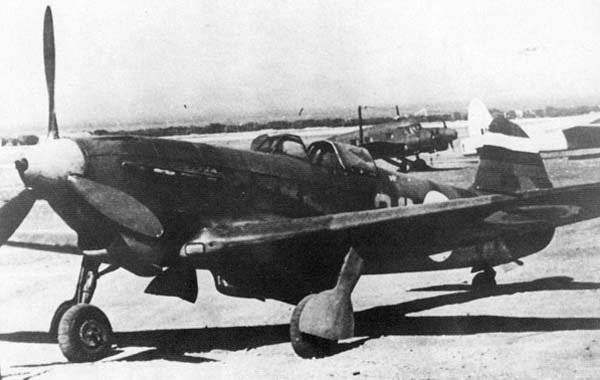 Fighter Yak-9P in the Museum of the Bulgarian Air Force

In the same year, the Bulgarian Air Force 1945 received X-NUMX attack aircraft Il-120 and 2 training Il-10U. Aircraft were used before the 2 year.

In April, the Soviet Union transferred the 1945 dive bombers Pe-96 to Bulgaria 2 in April. They arrived there after the war to replace the German type bombers that had been in service with Bulgarian aircraft. In turn, in April-October 1947, the Bulgarians transferred the 59 "pawns" of Yugoslavia to the account of the reparation. The last Pe-2 was retired from the Bulgarian Air Force in 1956.

8 September 1946, 92,72% of voters voted to overthrow the monarchy and proclaim a republic. September 15 The People’s Republic of Bulgaria was proclaimed 1946, the first prime minister of which was Georgi Dimitrov, an old communist, friend of Tito, and a supporter of the creation of a single South Slavic state in Yugoslavia and Bulgaria. In this regard, the Bulgarian Air Force receive a new identification mark: 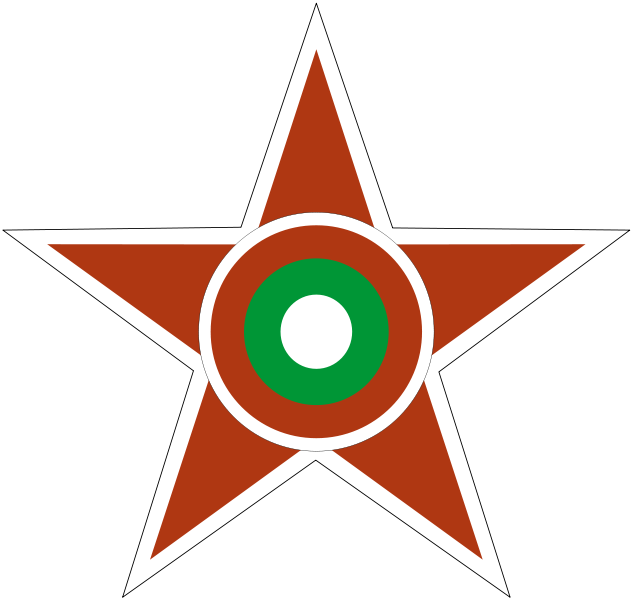 At the same time, deliveries of Soviet aircraft continued. So, Tu-2 bombers and torpedo bombers were set. 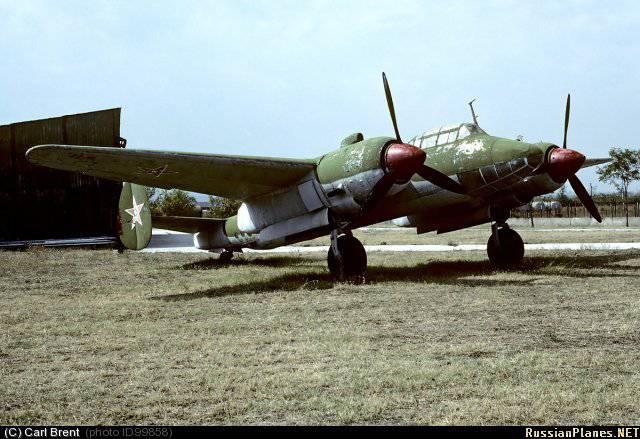 In 1947, the first Ilyushin ground attack aircraft arrived: IL-10 and IL-10М. In the period 1953-54. in Bulgaria were delivered produced in Czechoslovakia under the Soviet license copies of IL-10-Avia B-33, armed with 4 aircraft cannons NA-23РМ (150 projectiles per barrel). How many cars during this time were transferred is unknown.

After World War II, Bulgaria on account of reparations for the occupation of Macedonia passes a resurgent aviation Yugoslavia a large number of aircraft of different designs - 100 fighter Messerschmitt Bf.109G-2, G-6, G-10, training aircraft DAR-9 "Siniger", two divisions of bombers Pe-2, Il-2 attack planes, including the 30 light reconnaissance bomber of its own production of the Fazan design bureau X-11. After repair, "Pheasants" flew in parts of the Yugoslav Air Force until 1956.

The era of jet aircraft. The first Bulgarian jet aircraft were the Soviet Yak-23. The first 12 Yak-23 arrived at the 1951-th Fighter Aviation Regiment formed in March 19. They were followed by about another hundred Yak-23, in addition, two double Jak-23DC came from Romania. In total, these fighters armed five fighter and fighter-bomber air regiments, the 2 th training bomber aviation regiment and the Georgi Benkovski aviation school. The main task of the Yak-23 in the Bulgarian Air Force was to intercept border violators, mainly from Turkey, Yugoslavia and Greece. The Yak-23 remained in service with the Bulgarian Air Force until the 1958 year, and the last part where they were operated was the 43 fighter regiment.

At the beginning of the 1950's, the Bulgarian Air Force received 12 MiG-15, 24 MiG-15bis and 30 MiG-15UTI. In 1960, 12 MiG-15Рbis fighters arrived in Bulgaria. In the 1955 year, two Bulgarian MiG-15s shot down an Israeli passenger aircraft L-149, which violated the airspace of Bulgaria. The Israeli pilots ignored the warnings and even tried to break away from the patrol, and the Bulgarian government ordered the plane down. A passenger liner exploded near the town of Petrich. As a result, seven crew members and a 51 passenger, including three children, were killed. 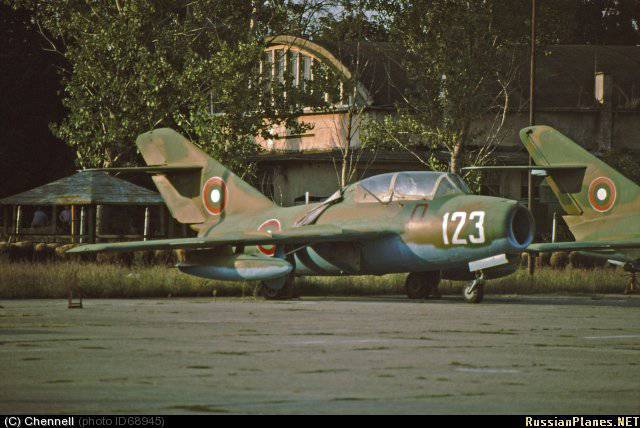 In 1955, the Bulgarian Air Force delivered 14 reconnaissance aircraft based on the Il-28-Il-28Р bomber and one Il-28U bomber. They were in service until the 1974 year.

IL-28 in the Museum of the Bulgarian Air Force

In the 1955-56, the Bulgarian Air Force received 12 jet fighters MiG-17, 60 MiG-17F and 12 MiG-17PF. In addition, in subsequent years, the fighter fleet was replenished with Polish-made Lim-5 aircraft. The 1963 received the 10 MiG-17P reconnaissance aircraft. In 1956, the MiG-17 Bulgarian Air Force shot down several automatic drifting balloons with reconnaissance equipment. All MiG-17 were armed with six squadrons, while at the beginning of the 60-s did not become replaced with the MiG-19. In the 1995, the Air Force still retained the 60 MiG-17, probably not flying.

In addition to combat, training fighters Yak-11, transport aircraft Li-2 and Il-14 (supplied by 17 machines) were delivered to Bulgaria from the USSR.

At the same time, the development of our own Bulgarian aircraft did not stop. Since 1948, the Laz-160 training aircraft designed by engineer Ivan Lazarov were produced by 7. Moreover, besides using it as a training machine, Laz-7 was in service in two divisions of light night bombers, created following the example of Soviet units armed with U-2 (Po-2) during World War II 1941-1945. year

Then 150 units of its upgraded version Laz-7M were produced with the Soviet M-11FR engine.

However, these were the last Bulgarian aircraft. The following models Laz-8, Laz-9 and Laz-12, as well as reactive Laz-14, remained on paper. 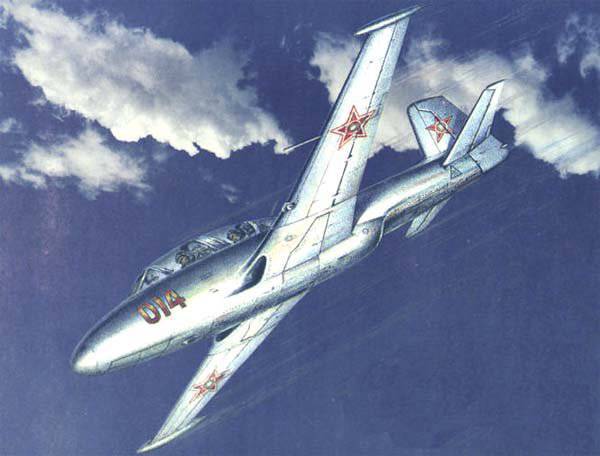 Given the mountainous nature of Bulgaria, helicopters play a large role in transportation. Therefore, Soviet MI-1 lungs (served up to 1971 of the year) and transport Mi-4s (served to 1985 of the year) were delivered to Bulgaria.

It should be noted that among the countries of the Warsaw Pact, Bulgaria was considered the most reliable ally of the USSR. On its territory there were no Soviet troops, and the Bulgarian People’s Army was the only army that was to be used independently: to seize the European part of Turkey and go to the straits and act against Greece, and if necessary, against Yugoslavia.

At the beginning of 1958, Bulgaria received 24 supersonic MiG-19С fighter aircraft, which were distributed between the 19-IAP at Graf Ignatiev Air Base (used before 1965) and the air force at Uzundievo airfield (before 1963). Later, part of the aircraft was brought to a separate squadron in Uzundievo, where they were operated until 1978. In 1966, Bulgaria received its former MiG-19P and MiG-19М from Poland. At Dobroslavtsy air base, they were used until the 1975 year. 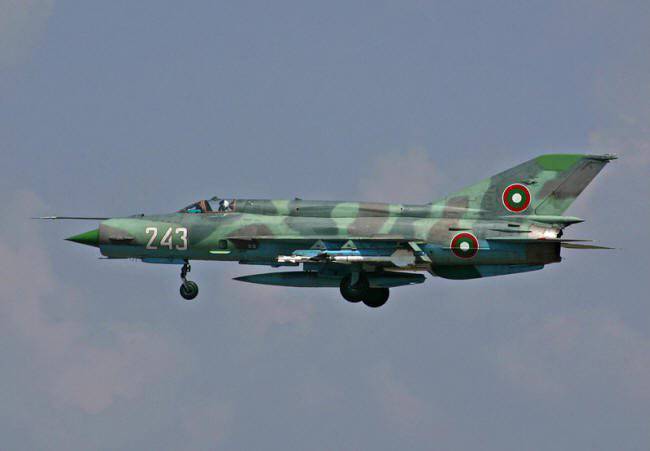 As training in the period 1963-1974. The Bulgarians were supplied 102 by Czechoslovak Aero L-29 Delfin, who served until the 2002 year.
L-29 Delfin in the Bulgarian Air Force Museum

For training purposes, around 30 of Czechoslovak Aero L-39 Albatros were delivered, 12 of which, according to some sources, continue to be used until now, according to others - they have already been taken out of service. 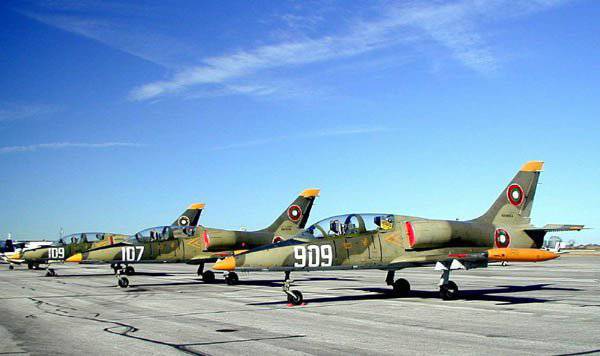 At the end of the 1970-ies began arming the Air Force NRB assault helicopters. In 1979, the newly formed fire support squadron as part of the 44 helicopter regiment received the first 4 Mi-24D. In 1980, the regiment was redeployed from Plovdiv to the Krumovo airfield, and the squadron of fire support in Stara Zagora, where it became the basis of the 13 battle helicopter regiment. In total, by the year 1985, the regiment received 38 Mi-24D and 6 Mi-24В. In October, 2000, the helicopters were relocated to Krumovo, where they became part of the 2 squadron of the 24 helicopter base. Currently, Mi-24 retired. 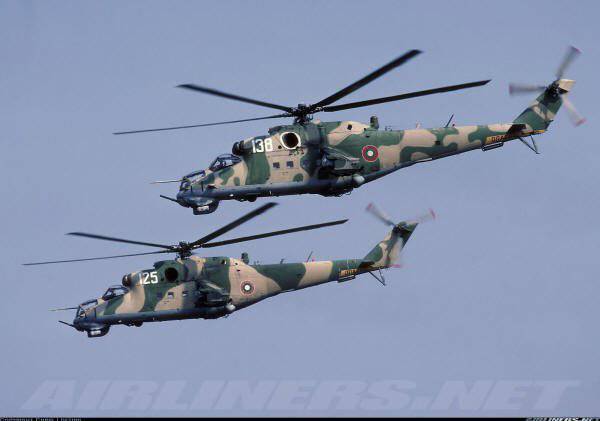 A pair of Bulgarian Mi-24 in flight

In 1982, Bulgaria, the only European allies of the USSR, received 4 reconnaissance bomber MiG-25РБ (3 MiG-25РБ and 1 MiG-25RU). The aircraft entered the 12 th reconnaissance regiment. 12 April 1984, one of them (b / n 736) was lost in a plane crash. However, the speed of the MiG-25РБ in the conditions of Bulgaria turned out to be of little use for the plane, it simply did not have enough territory to accelerate, and therefore in May 1991, the Bulgarians returned them to the USSR, exchanging MiG-5LD fighters for 23.

X-NUMX An-3 transport was delivered to Bulgaria, 26 of which continue to be used until now. 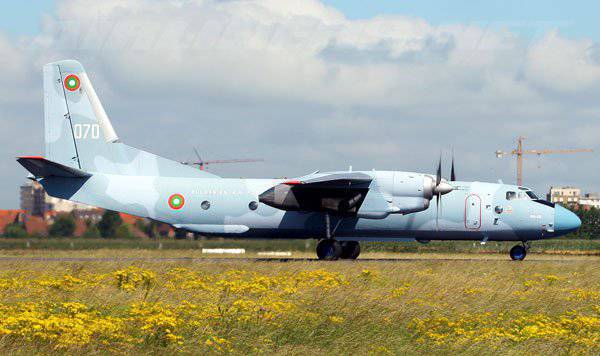 In 1985-1991 Bulgaria received from the Soviet Union a batch of transport helicopters Mi-8 / 17. The 2000 Mi-25 helicopters remained in service with the Bulgarian Air Force in 17, and the 2004 in the 18. In 1989-1990 The Bulgarian Air Force received four EW Mi-17PP helicopters that were first publicly demonstrated only in 1999. In the same 1999, special radio-electronic equipment and antennas were dismantled from three Mi-17P helicopters. The fourth Mi-17PP was "moderated" in 2000. In 2003-2004. One of these helicopters was converted into a fire-fighting one by installing a side for 3 tons of water in the cargo and passenger cabin. 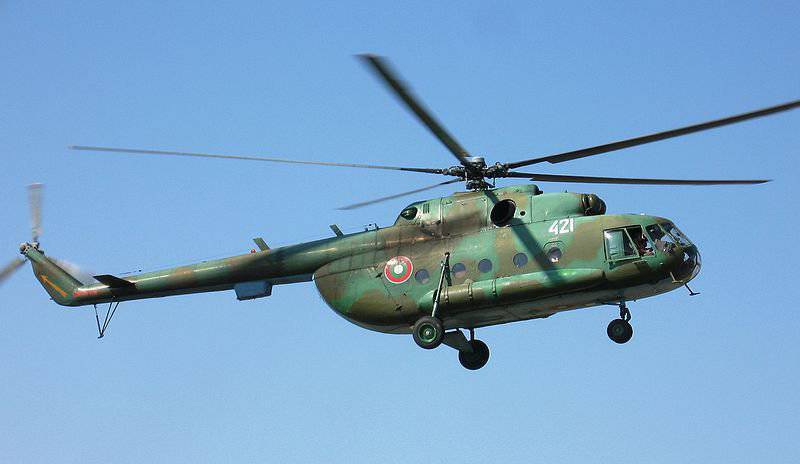 In October, 1986, Bulgaria received 36 Su-25K and four Su-25CP. The aircraft were operated by 22 ibap, where they replaced the MiG-17 and the MiG-XNUMHUTI. One plane (along with the pilot) was lost in the 15 crash of April 17. After the collapse of the Warsaw Pact, the support of aircraft in combat readiness became a headache for the Bulgarian command. The 1989 attack aircraft in the 4 year were sold to Georgia, another 2008 to her in the 10 year. Currently, the Bulgarian Air Force has 2012 Su-14. 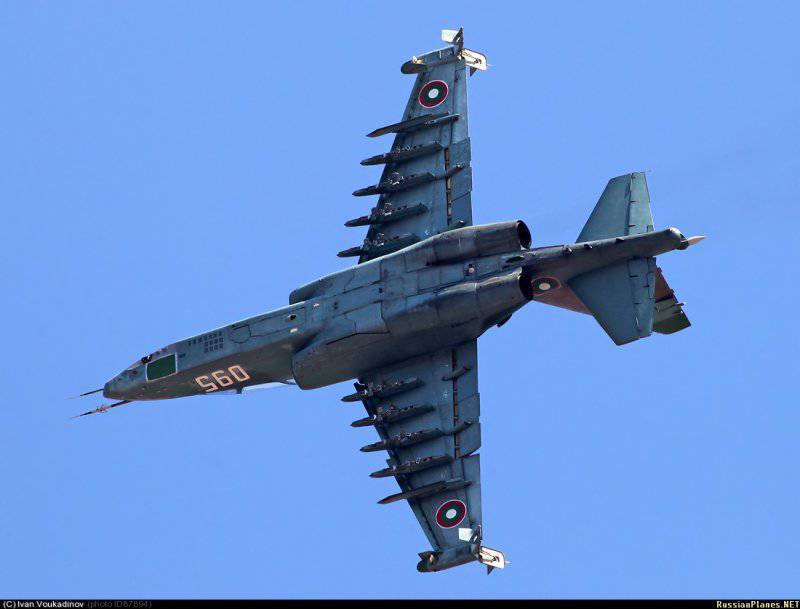 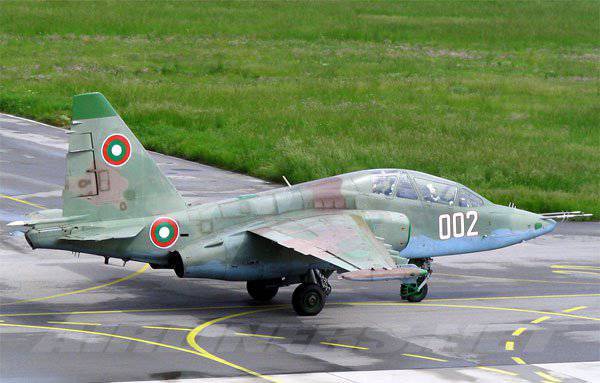 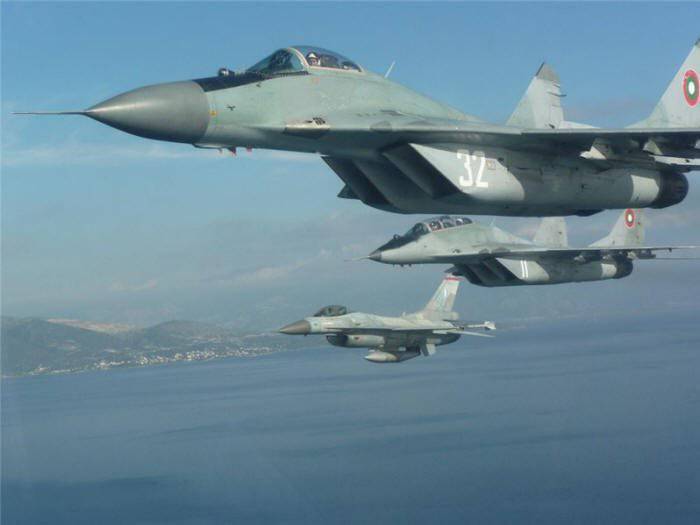 In 1989, the Bulgarian Air Force was armed with the order of 300 fighters. However, the Warsaw Pact Organization fell apart, then the USSR, the liberals came to power in Bulgaria, who first of all began to reduce the Armed Forces, the first thing they had to do was the identification mark of the Bulgarian aircraft 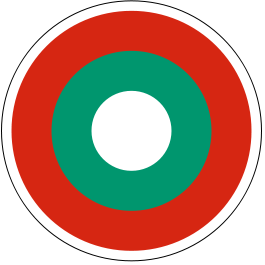 The nineties became difficult for the Bulgarian aviation, there was no fuel, the exercises were not conducted, the planes were constantly written off. In April, 2004, Bulgaria joined NATO. In preparation for the entry into the Alliance, a large-scale restructuring was carried out at the Bulgarian Air Force in 2003. The number of airplanes and helicopters from 465 in 1998 has been reduced to 218 in 2003. The de facto Bulgarian Air Force at the turn of the 20th — 21st centuries. in fact, they lost their combat effectiveness, since most of the aircraft on the list of aircraft were unsuitable for flight. Naturally, the new allies demanded that Bulgaria buy Western planes. In 2004, the Bulgarian Air Force bought in Switzerland 6 piston training aircraft Pilatus PC-9M. 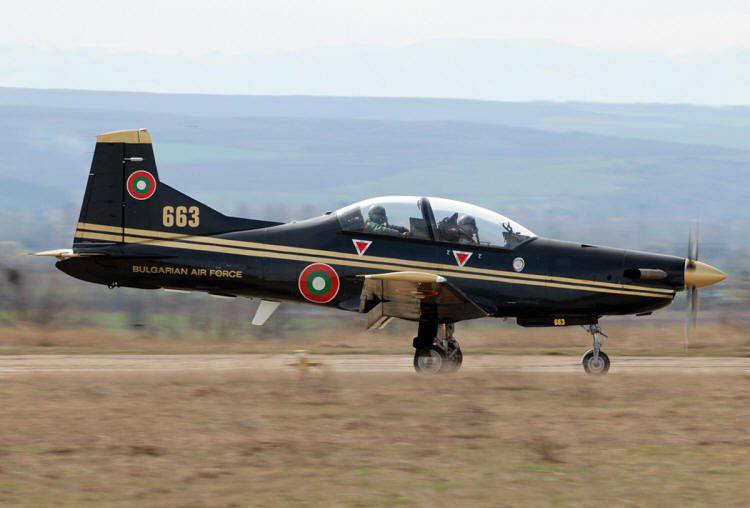 In 2004, a contract was signed with Eurocopter for the purchase of the X-NUMX multipurpose Cougar AS-12AL, intended for the Air Force, and six AS-532MB Pantera, for the Navy. 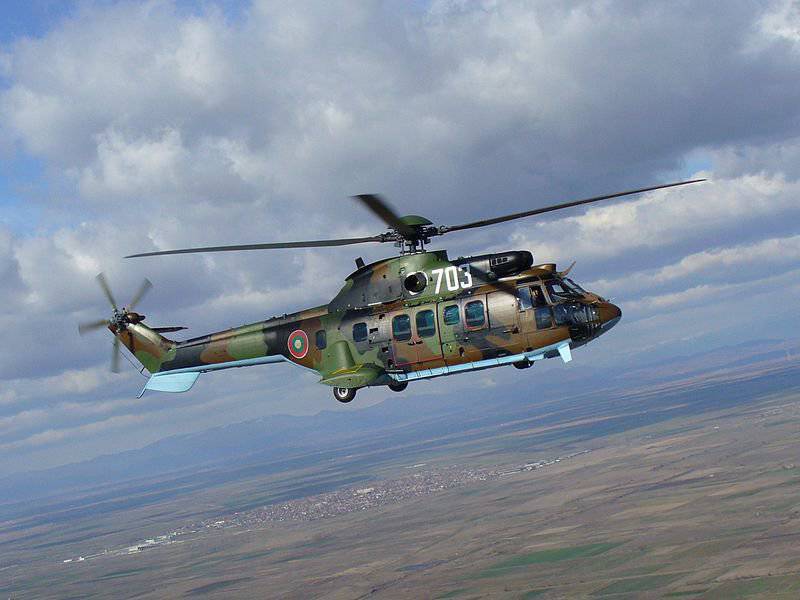 In 2006, the Italian airline Alenia ordered the 3 light military transport aircraft C-27J Spartan. Initially, the agreement involved the delivery of five aircraft, but in 2010, the Bulgarian Ministry of Defense decided to abandon the latter two. The military department promulgated its decision last August. The reason for the rejection of the aircraft was the military budget deficit. The savings saved on the fourth and fifth Spartan, Bulgaria planned to spend on paying for the third aircraft. 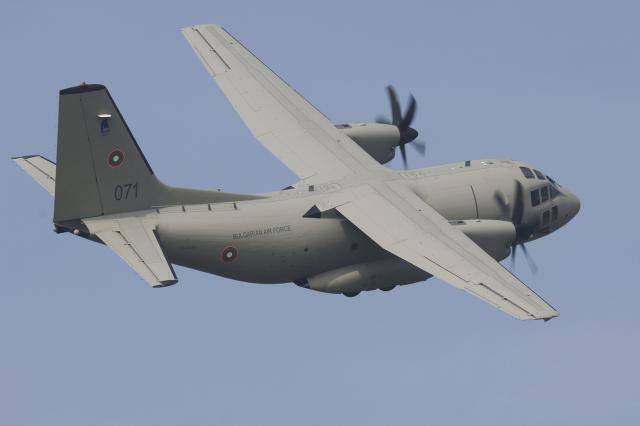 Bulgaria is currently looking for a replacement for the MiG-29. Given the pro-Western policy of the Bulgarian government, most likely, the replacement will be the American F-16, or decommissioned somewhere in Europe. The Belgians have already offered F-16MLU, decommissioned their Air Force. The Americans responded with a proposal to supply the F-16 fighter unit 52 +, the Swedes traditionally offered the Gripen fighter Saab JAS-39. However, the Bulgarians have no money traditionally. So let's see ...