In China, a new combat vehicle

18 September 2014
28
The Chinese defense industry has a peculiar habit: it rarely publishes information about its new developments. As a result, the first information about the new weapons or techniques appear only some time after their appearance, and in the descriptions there remains a mass of “white spots”. As a result of the emergence of new information about Chinese developments, various leaks often contribute. A few days ago, photos of a new combat vehicle, previously not featured on published photo and video materials, appeared on Chinese websites.

Only five photos of a new combat vehicle, taken, probably, on a telephone or other mobile device, got into the Internet. The photo shows the transportation of the combat vehicle on a tractor with a trailer. Unknown photographer managed to remove the new development only from the front and from the starboard side. Other materials on this machine are not yet available: any details of the project, as well as its name, are unknown. Nevertheless, even published low-quality photos are of great interest to those interested in Chinese armored vehicles. 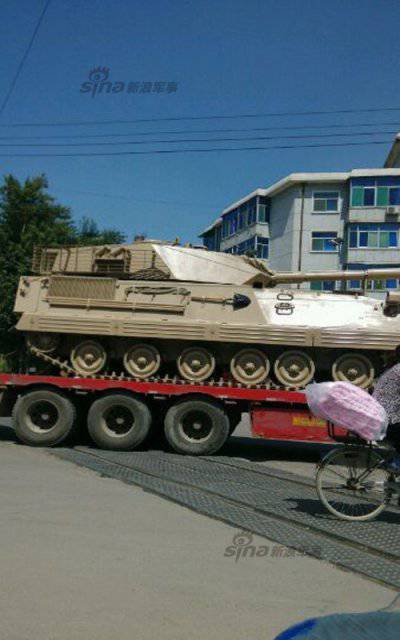 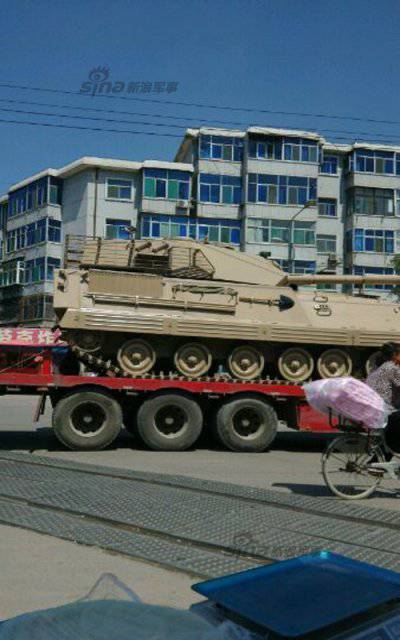 When considering a new car, the body and the undercarriage are the first to catch the eye. Their appearance directly suggests that the base for the new car was the Type 89 armored personnel carrier, created in the late eighties and under construction by NORINCO. According to some data, currently the Type 89 is considered outdated and does not meet the requirements for modern BTR, which is why it is mainly used as a base for various other types of equipment. Apparently, the new combat vehicle was one of such developments based on a relatively old chassis.

The original armored personnel carrier, which served as the basis for the new combat vehicle, has a combat weight of 14,3 tons, length 6,15 m, width 3,1 m and height 2,6 m. The armored hull of the Type 89 machine protects the crew and units from small arms bullets, including large-caliber and fragments of artillery shells. The BTR is equipped with a German Deutz BF8L 413F diesel engine produced in Germany with 320 horsepower. The maximum speed of the car on the highway is declared at 66 km / h, the power reserve is 500 km. The armament of the Type 89 armored personnel carrier consists of one large-caliber machine gun.

Judging by the photos of the new machine, during the creation of this project, the base chassis has undergone some changes related to the deployment of the combat module. The hull lines remained the same, but the overall length of the machine increased, and a pair of track rollers was added. A number of features of the machine allows you to talk about preserving the layout. Thus, the engine compartment is located in front of the case. Behind it is the office of management with the places of the driver and, possibly, the commander. The view of the photos does not allow to determine the number of hatches in the roof of the department of management. The former troop compartment of the base armored personnel carrier is given under the combat compartment. On the roof of the new combat vehicle is a tower. 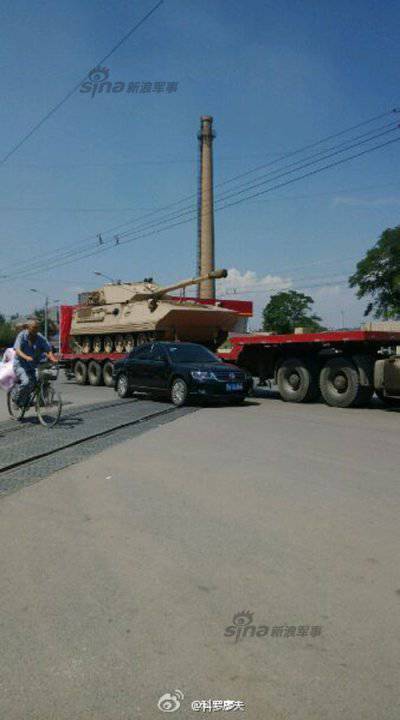 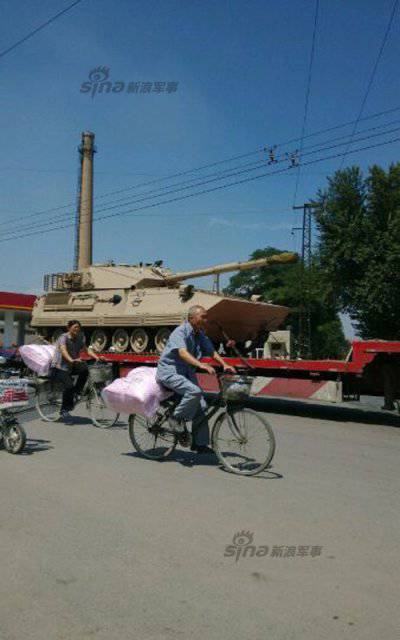 Chassis looks similar to the old, but differs from it by the presence of an additional pair of road wheels. In its composition, as is the case with some later modifications of the Type 89 BTR, there are six road wheels, three supporting rollers, a front drive wheel and a rear guide wheel on each side. The distance between the second and third pairs of track rollers is reduced. The photo clearly shows the torsion bar balancers. Any additional shock absorbers are not included in the frame. The design of the undercarriage suggests that, by its mobility characteristics, the new combat vehicle is inferior to the base Type 89 armored personnel carrier. In contrast to the base BTR, the new machine is equipped with a turret, which increases its combat weight and, accordingly, reduces the power density, which affects the characteristics.

The turret of a new Chinese military vehicle is mounted on a shoulder strap in the middle of the hull roof with some shift to the stern. The outer surface of the tower is made up of several even panels mated at different angles. In the frontal part of the tower there are relatively large wedge-shaped armored obstacles. Their appearance allows to build assumptions about the use of combined protection. In addition, the project may provide for the installation of dynamic protection modules.

The tower has a large aft niche, which is likely to house the ammunition stack. The stern and rear of the sides of the tower are covered with lattice fences, which increase the level of protection. Behind the onboard grilles there are smoke grenade launchers. On the roof of the tower visible hatches of the crew and blocks of various equipment. The number of hatches and the composition of the sighting equipment is unknown. Probably, the tower has three hatches for the crew members working in the fighting compartment: the commander, gunner and loader.

It should be noted that the tower of the new combat vehicle, seen a few days ago, is very similar to the tower of the same "nameless" lung tank, which became known several years ago. It is known that this tank has been supplied by the People’s Liberation Army of China since 2010 and is used in a number of units, primarily based in the mountainous regions of the country. Probably, when creating a new combat vehicle, it was decided to use an armored tower of an exhausted design. The appearance of the towers of two armored vehicles clearly indicates that the new project provides for a different, simplified composition of the equipment. 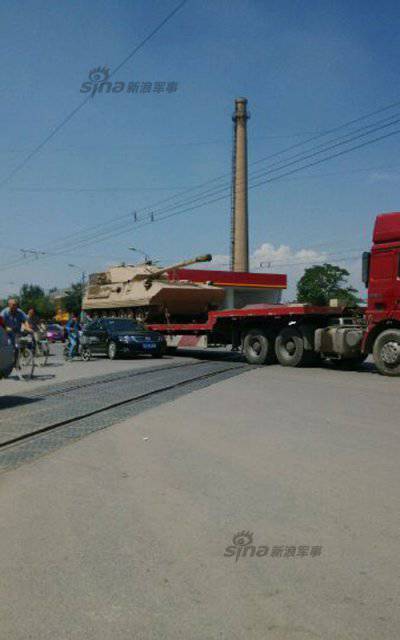 The main weapon of the new combat vehicle is a weapon installed in the turret. According to the authors of the blog BMPD, this is a rifled gun caliber 105 mm. The gun is equipped with an ejector, a heat shield and a muzzle brake, which, however, is covered with a cover in the photographs. The type of weapon and its characteristics are unknown. Raises questions and the composition of additional weapons. Probably, a rifle-caliber machine gun was paired with a gun, and an anti-aircraft machine gun could be mounted above one of the tower hatches.

The name, characteristics and purpose of the new Chinese war machine, captured in published photographs, still remain a mystery. The developer and the military department of China have not made any official statements. Knowing the Chinese "tradition" of publishing information about the new military equipment, one should not expect that the answers to the existing questions will appear in the near future. It remains only to speculate and try to guess what the new sample is.

The base chassis borrowed from the armored personnel carrier, with a number of its features, and the 105 mm caliber cannon suggest that an unknown photographer managed to capture a new Chinese light tank design. Indeed, judging from the available information, the new combat vehicle satisfies a number of requirements for such equipment. This bulletproof and anti-fragmentation booking, as well as a relatively powerful weapon, whose caliber still does not allow to compete with the main tanks. At the same time, the assumption of creating a new amphibious tank should be immediately discarded. On the existing photos, there is no waveguide shield, and the estimated combat weight of the vehicle of at least 16-18 tons will not allow the vehicle to cross water barriers by swimming.

Some questions are caused by the coloring of the "nameless" combat vehicle. Camouflage paint on the basis of green or blue color is applied to the equipment of the Chinese army, depending on subunits and types of troops. The sample seen by the photographer, in turn, is painted in khaki sand tint. It is possible that the prototype machine, which does not fall into the troops, it was decided to cover this paint, which was available at the manufacturer. However, such a coloring can be considered proof that China has created a new combat vehicle designed exclusively for export deliveries, and the sample in question is built on the order of any country with a desert landscape and a hot climate.

China has traditionally been in no hurry to make statements about a new combat vehicle, information about which accidentally became public knowledge. Foreign experts and lovers of military equipment, in turn, are trying to analyze the existing photos and draw conclusions about the new development of Chinese engineers. Not having complete information about the new combat vehicle, only the most general conclusions can be made. The photos directly say only that a new light tank has been created in China, in whose design elements borrowed from other armored vehicles are widely used. The prospects for such an armored vehicle can be a topic for individual disputes.