Submarines of the Russian Navy

15 September 2014
3
Critical part of the naval fleet are his submarines. Modern submarines can perform a wide range of tasks to detect and destroy ships, submarines or ground targets of the enemy. In addition, the naval component of the strategic nuclear forces is completely built on the basis of submarines. Currently, as part of the renovation of the Navy, new submarines of various types are under construction. In the foreseeable future, the fleet should receive several dozen submarines, both strategic or multipurpose, and diesel-electric or special. Nevertheless, so far the basis of the submarine fleet in quantitative terms is the submarines built earlier, including before the collapse of the Soviet Union. 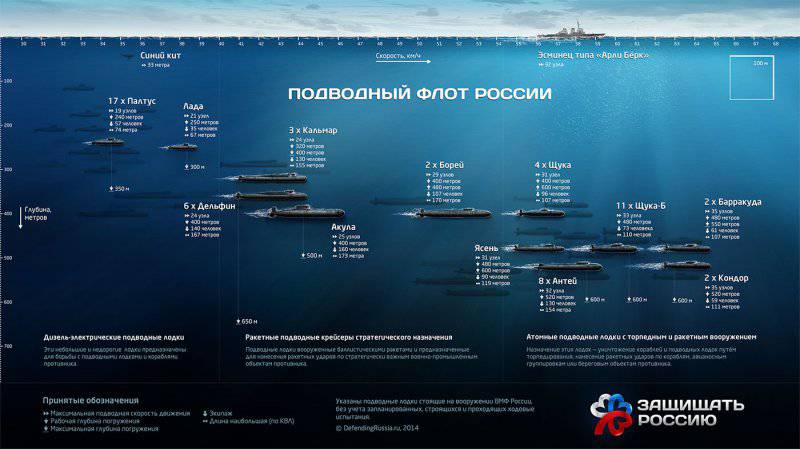 The basis of the nuclear component of the nuclear forces are nuclear submarines of the project 667BDRM "Dolphin". Currently, the Russian Navy has six such submarines: K-51 "Verkhoturye", K-84 "Ekaterinburg", K-114 "Tula", K-117 "Bryansk", K-118 "Karelia" and K-407 Novomoskovsk. The submarine "Ekaterinburg" is currently undergoing repairs. Completion of work and delivery of the boat are scheduled for the end of this year. Another submarine of the project "Dolphin", K-64, in 1999, was withdrawn from the fleet of combat personnel and soon went to re-equipment. All six submarines of the 677BDRM project serve as part of the Northern Fleet.

The second largest type of SSBN in the Russian Navy is the Kalmar project 667BDR. Submarines of this type were built from the mid-seventies to the early eighties. Most of the submarine cruisers "Kalmar" to date, decommissioned and disposed of. Now the fleet has only three submarines of this type: K-433 “St. George the Victorious”, K-223 “Podolsk” and K-44 “Ryazan”. The latter is the newest of the existing submarines of the 667BDR project and was transferred to the fleet in the 1982 year. All three “Squid” serve in the Pacific.

Until the mid-nineties, the nuclear deterrence was carried out by the K-129 submarine Orenburg, built according to the 667BDR project. In 1996, it was decided to convert it into a carrier of deep-water vehicles. Currently, Orenburg refers to the 09786 project and is designated BS-136.

There are three submarines of the 941 and 941UM “Shark” projects in the ranks and in the reserve of the Northern Fleet. Heavy missile cruiser TK-208 "Dmitry Donskoy" continues to serve. This was facilitated by the repair and modernization in accordance with the 941UM project, during which the submarine received the equipment of the Bulava missile system. Two other Sharks, TK-17 Arkhangelsk and TK-20 Severstal, were put into reserve in the middle of the last decade due to the absence of P-39 missiles. Their further fate has not yet been determined.

In January, 2013 held a flag raising ceremony at the head SSBN of the new 955 Borey project. The submarine K-535 "Yuri Dolgoruky", built with 1996 year, passed all the tests and was transferred to the fleet. At the end of December of the same year, the submarine cruiser K-550 “Alexander Nevsky” was accepted into the Navy. The main submarine of the project "Borey" became part of the Northern Fleet, the first serial - in the Pacific Fleet.

Separate consideration is the fate of the K-152 “Nerpa” boat. It was laid in the 1991 year for the domestic fleet, however, financial difficulties led to the disruption of all deadlines for the work. In 2004, a contract was signed, in accordance with which the submarine was planned to be completed and transferred to the Indian Navy. After a series of difficulties, all the work was completed, and in January 2012, the submarine was accepted by the customer.

The second largest multipurpose submarines in the Russian Navy are the submarines of the 949A Antey project. In the Pacific and Northern fleets, 5 and 3 are submarines of this type, respectively. It was originally planned that the Navy will receive 18 of such submarines, but the financial capabilities of the fleet allowed to build only 11. To date, three boats of the Antey project have dropped out of operation. In August, the submarine K-2000 "Kursk" tragically died 141, and since the end of the two thousandth years, work is underway on the disposal of the submarines K-148 "Krasnodar" and K-173 "Krasnoyarsk". Of the remaining submarines, four are currently undergoing repairs.

From the late seventies to the early nineties, four submarines of the 945 "Barracuda" and 945A "Condor" projects were built. The X-NUMX ships Karp and the B-945 Kostroma were built according to the 239 project, while the NNizhny Novgorod and the B-276 Pskov B-945А ships were built. All these submarines are listed as part of the Northern Fleet. Last year, work began on the repair and modernization of the Karp submarine. After it repair will be held "Kostroma". Pskov and Nizhny Novgorod continue to serve.

So far, four multipurpose nuclear submarines of the 671РТМК “Schuka” project remain in the Northern Fleet. Two submarines, the B-414 “Daniel of Moscow” and the B-338 “Petrozavodsk” continue to serve, and the other two, the B-138 “Obninsk” and the B-448 “Tambov” are under repair. In accordance with current plans, all of the Pike fleets in the fleet will complete their service in the foreseeable future. It was previously reported that they will all be written off by the end of 2015 of the year. They will be replaced by multipurpose submarines of new types.

17 On June 2014, a solemn flag raising ceremony was held on the K-560 submarine "Severodvinsk", the lead ship and the only ship of the 885 project "Ash". The first "Ash" was laid at the end of 1993 of the year and launched only in 2010. Before 2020, it is planned to build 8 Yasen-type submarines with missiles. Due to the long construction time of the head submarine, all the other submarines of the series will be built according to the updated 885M project. At present, on the stocks of the Sevmash enterprise there are three submarines of a new type: Kazan, Novosibirsk and Krasnoyarsk. 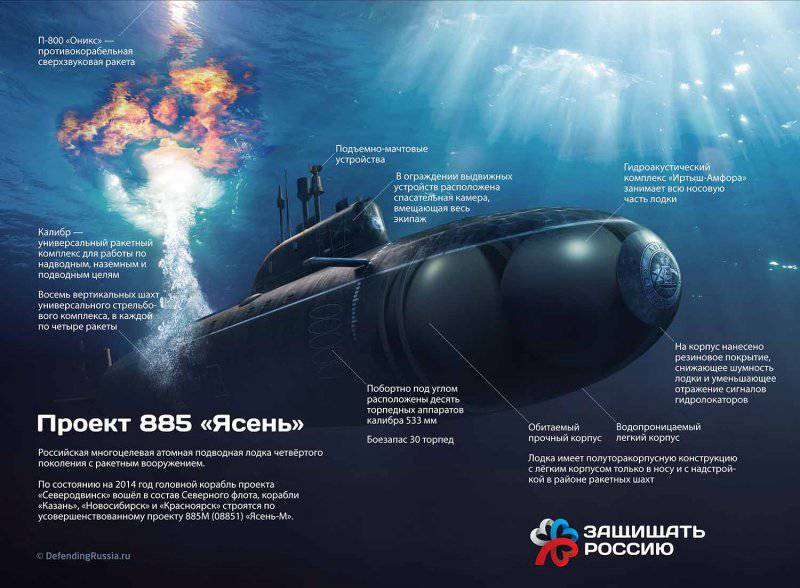 Since the early eighties, several domestic shipyards engaged in mass production of diesel-electric submarines project 877 "Halibut". During the last decades, several versions of this project were created, thanks to which the “Halibut” of various modifications became the most massive submarines in the Russian Navy.

The Baltic Fleet has two turbine-propelled sub-structures of the “Halibut” project: the B-227 “Vyborg” and the B-806 “Dmitrov” (pr. 877EKM). The Black Sea Fleet has only one boat of the 877В project - the B-871 “Alrosa”. The second largest group of "Paltus" is available in the Northern Fleet - five diesel-electric submarines of the 877 project and one 877LPMB project. Finally, there are eight 877 “Halibus” submarines on the bases of the Pacific Fleet.

A further development of the 877 project is the 636 Varshavyanka project and its versions. 22 August 2014, the main submarine of the project 636.3 - B-261 "Novorossiysk" was accepted into the combat structure of the Black Sea Fleet. By the end of the decade, the Black Sea Fleet will receive five more submarines of this type. Two of them, B-237 "Rostov-on-Don" and B-262 "Old Oskol", have already been launched.

Until recently, high hopes were pinned on the 677 “Lada” diesel-electric submarine diesel engine project, which are a further development of the “Halibut”. Previously, there were plans to build a series of several boats of the 677 project, but the tests of the lead ship made them make serious adjustments. As a result, the first submarine of the project, the B-585 "St. Petersburg", is in trial operation by the Northern Fleet. Two serial ships of the 677 project are under construction. In connection with the problems of the head of the submarine construction of the serial for some time suspended.

In addition to combat submarines, the Russian Navy has a number of special submarines and submarines designed to perform specific tasks of various kinds. For example, the Baltic Sea, the Northern and the Pacific Fleet operate four deep-sea rescue vehicles of the 1855 Prize project.

According to open data, the Northern Fleet contains 10 nuclear and diesel-electric submarines for special purposes, designed to perform various tasks. This technique is designed to perform research, rescue operations and ensure the combat duty of submarine missile cruisers. The most famous representative of this class of technology is the special submarine AC-12 "Losharik", capable of diving to a depth of several kilometers. It was reported that in September 2012 of the year "Losharik" participated in research in the Arctic, during which its crew collected soil samples at a depth of more than 2 kilometers.

In the future, the Russian Navy should receive a number of new special-purpose submarines. Thus, since 2012, the submarine “Belgorod” of the 949A project is being completed according to a special project, due to which it can become a carrier of deep-sea research apparatuses. In the spring of last year, representatives of the Navy claimed that the plans of the military department included the construction of a special submarine for hydroacoustic patrol, the task of which would be to detect underwater targets at a distance of several hundred kilometers.

At the moment, in total, the Russian Navy has more than seven dozen submarines and vehicles for various purposes. The vast majority of this technology was built before the collapse of the Soviet Union, which accordingly affects both the condition and the capabilities of the submarine fleet. However, in recent years, a number of measures have been taken to update it. In accordance with current plans before the 2020, the Navy should receive a relatively large number of new submarines.

Until the end of this decade, the fleet will receive eight strategic missile carriers of the 955 "Borey" project, the same number of multipurpose nuclear submarines of the 885 "Ash" project and six diesel submarines of the 636.3 "Varshavyanka" project. Atomic "Boreas" and "Ash" will be distributed between the Northern and Pacific Fleets. "Varshavyanka", in turn, will serve on the Black Sea bases. Previously announced plans for the future of the project 677 "Lada". In the near future it is planned to develop an updated version of this project, in which a new power plant will be used. Successful completion of this project will expand the plans for the construction of non-nuclear submarines.

In parallel with the construction of new submarines will be written off old. For example, by the 2015-16 years it is supposed to stop the operation of the remaining submarines of the 671-RTMK Shchuka project. Almost all submarines of this type have already been withdrawn from the fleet and disposed of, and only four remain in the ranks. Over time, similar processes will occur with other types of submarines, which will be replaced by new Ash Trees, Boreas, Varshavyanka, and, possibly, Lada. However, a full upgrade of the submarine fleet will take a lot of time and will be one of the most expensive projects for the entire history The Russian Navy.