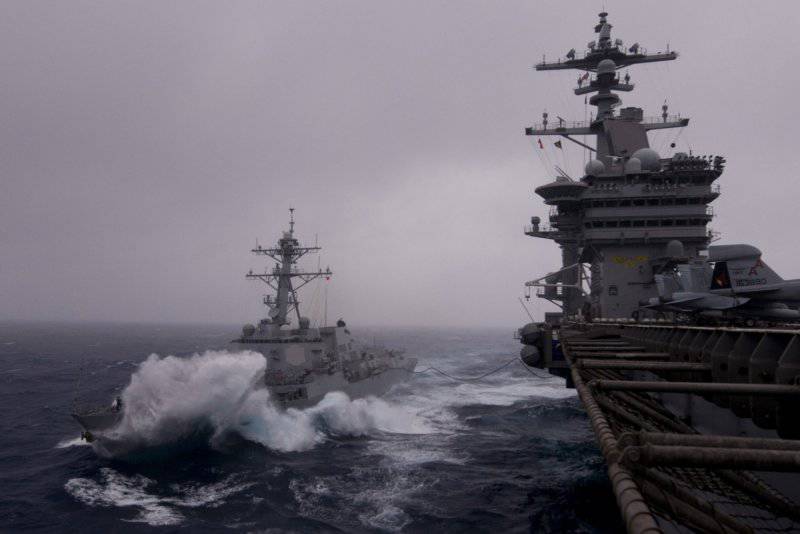 Continuation of the saga of the most outstanding ships. There are no random names here - each of the characters is forever marked in stories fleet. Laurels of military glory and unconditional victories in the Cup of Designers. These combat vehicles have yet to redo the world and make us convinced of their unsurpassed capabilities.

So, a new chapter, a new time, new technologies:

A unified family of warships equipped with the Aegis combat information system. Total 62 squadron destroyers in the US Navy, six in the Japanese Navy self-defense (Atago and Congo), three in the South Korean Navy (King Shoge), five in the Spanish Navy (Alvaro de Basan) , five in the Norwegian Navy ("Fridtjof Nansen"), in the near future - three more destroyers in the Australian Navy (Hobart type). Even without taking into account the numerous copies and analogs of American destroyers, in the foreseeable future, none of the states of the world will be able to break the record of the large-scale construction of the "Berkov". 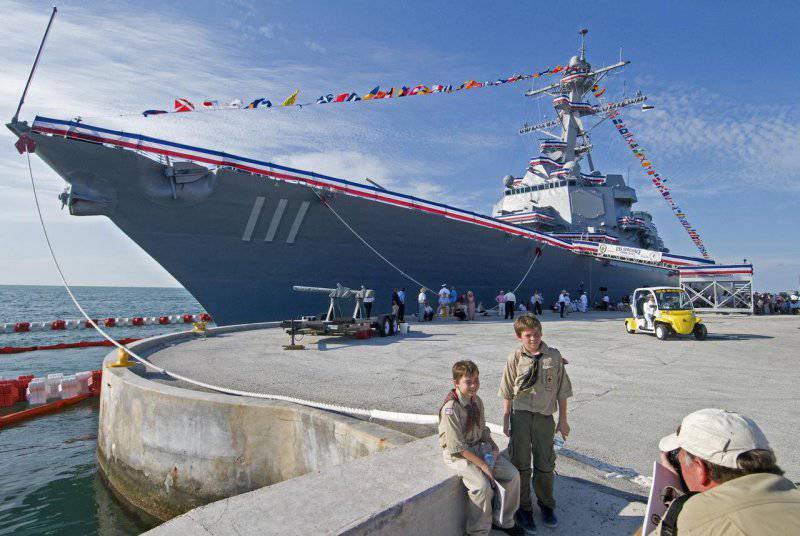 The situation with Aegis destroyers threatens to get out of control. Despite the exorbitant number of built ships, their construction is still ongoing. In November, 2013 was laid down by "John Finn" - the 63 th destroyer for the US Navy. Ahead of the order for nine such ships. From the beginning of 2020, when the first of the Aegis destroyers that were built, have already left the fleet, Flight III will go into series - the destroyers of the third sub-series, whose construction will continue until 2031. It is planned that the squadrons of these ships will plow the ocean until at least 2070 year.

This is despite the fact that the first "Orly Burke" was commissioned in the distant 1991 year. And none of the foreign competitors have so far failed to surpass the “Burke” in the aggregate of combat capabilities.

80 years at the forefront of technical progress! Success is determined by several reasons:

- BIUS "Aegis" ("Aegis"), which united in a single network all weapons systems, means of detection, navigation and struggle for survivability of the ship - up to the automatic closing of doors in the emergency room in order to prevent further spread of fire (water). An automated robot ship that can simultaneously fight with dozens of surface, underwater and airborne enemies. Independently making decisions and exchanging information with their own kind;

- the powerful AN / SPY-1 radar with a peak 6 megawatt output power. As a result, the little destroyer was able to control cosmic heights;

- universal launcher Mk.41 - 90 mines for storing and launching any missiles from the arsenal of the US Navy (with the exception of naval ICBMs). 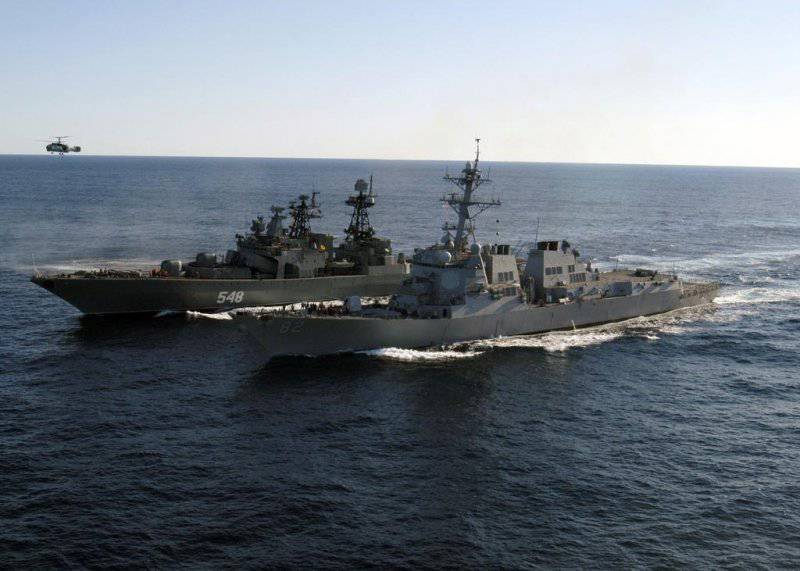 There are disadvantages. Like any modern ship, the supersweeper is completely disabled by the explosion of a bag of TNT (undermining USS Cole), demonstrating survivability at the level of a tin can. All hope is only on active defense systems, which also do not shine with perfection. "Burke" deftly hurls "Tomahawks" at targets in the Iraqi desert and hits objects in low earth orbit, but due to its design flaws it is not able to effectively protect itself from attacks of modern anti-ship missiles. The power plant of the last century, archaic means of controlling anti-aircraft fire ... Despite continuous evolution, it is becoming more and more difficult for the Berks to be in the forefront of progress, competing with modern destroyers of other states. 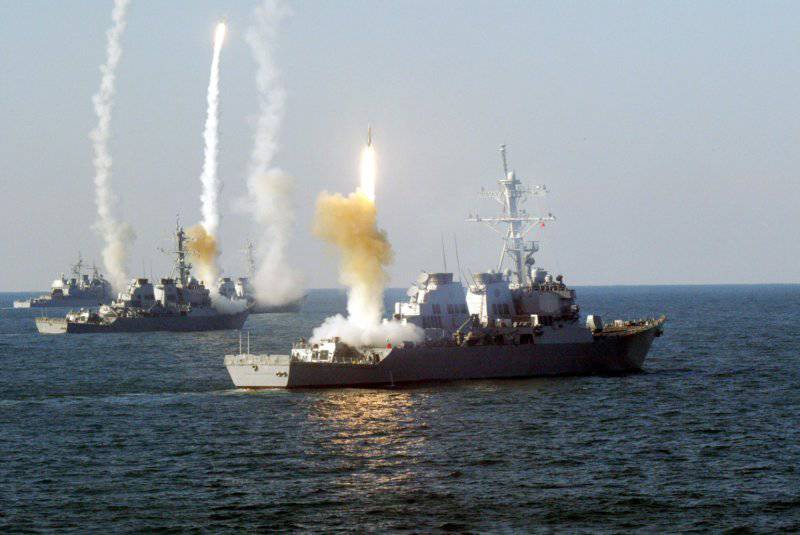 One way or another, Burke-type destroyers are an outstanding example of a highly standardized design and a model for large-scale construction. The most numerous type of warship with a displacement of more than 5000 tons in history! These destroyers have a solid combat experience: not the first country has already experienced a rocket attack from the board of these small, but very formidable ships.

The largest, most expensive and most stupid participants in today's review. A relict class of ships that lost their combat value with the development of a jet aviation. Their technical complexity is incredible. Efficiency (cost / benefit) is extremely low. 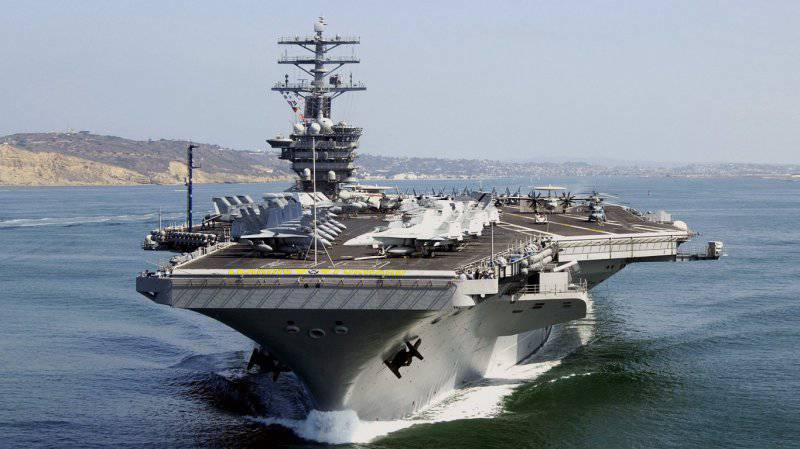 None of the Nimitse 10 has any decent combat history. And this is despite the fact that for all the time of their existence the Pentagon "plunged" into many military conflicts, where the American fleet was actively used. "Nimitz" are of little use in local wars for oil, where everything is decided by a full-fledged Air Force. And it is worth noting that neither now, nor during the years of the Cold War, nor in the foreseeable future will there be a situation where there would be at least some opportunity to use these giants for their intended purpose - apart from land-based aviation. Alien landing on Easter Island is a second-rate plot for Hollywood (a la "Battleship"), but there’s no reason for writing the doctrine of the modern Navy.

However, the reason is still there - the industrial and military lobby, jobs, commitment to tradition, as well as the transcendental steepness of such "floating airfields". From a military point of view, Nimitsy do not work out 1% of the funds invested in them. But from the point of view of the media, these are real media bombs that make the whole world tremble. "100 thousand tons of diplomacy", "main aggressors" - and other funny pictures, overflowing television screens around the world. After all, few of the commoners realize that even the 10 “Nimitsev” would not have enough strength to attack at least a country like Iraq. 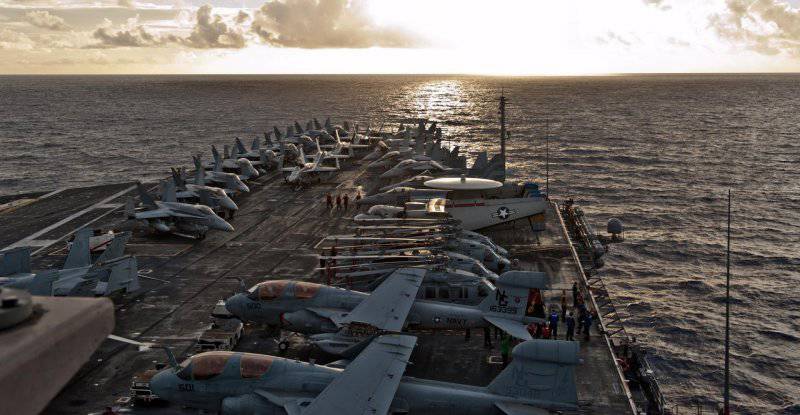 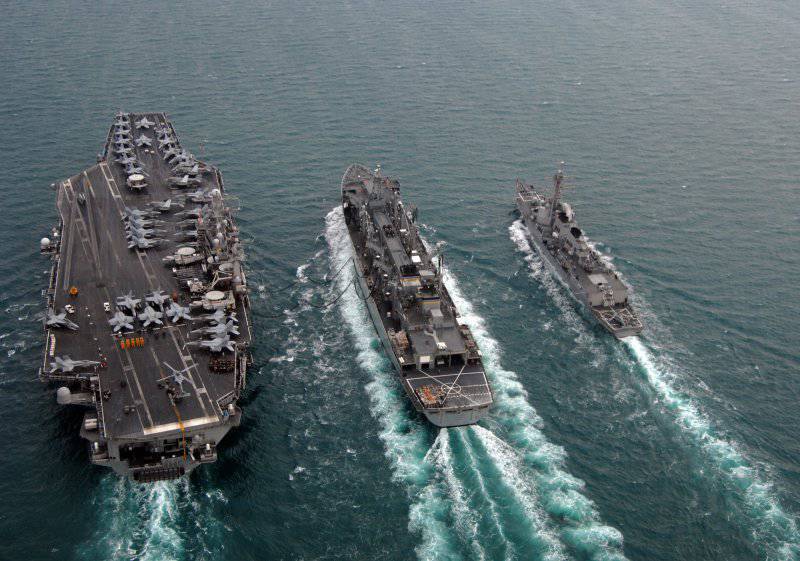 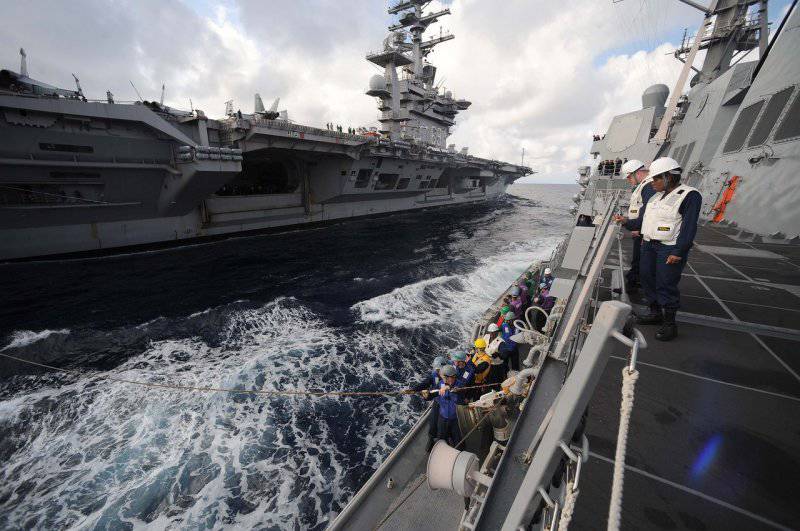 As a result, we have fantastically beautiful, but completely useless and inefficient ships. The victory of technology over common sense. However, 10 leviathans, each with 100 thous. Tons, inspire concern and respect for their creator. Those who were able to build such a squadron, there are other, much more terrible and deadly means for waging war at sea.

And the aircraft carrier "Nimitz" became the embodiment of all dreams of a strong and powerful fleet. Remember it will be a long time. 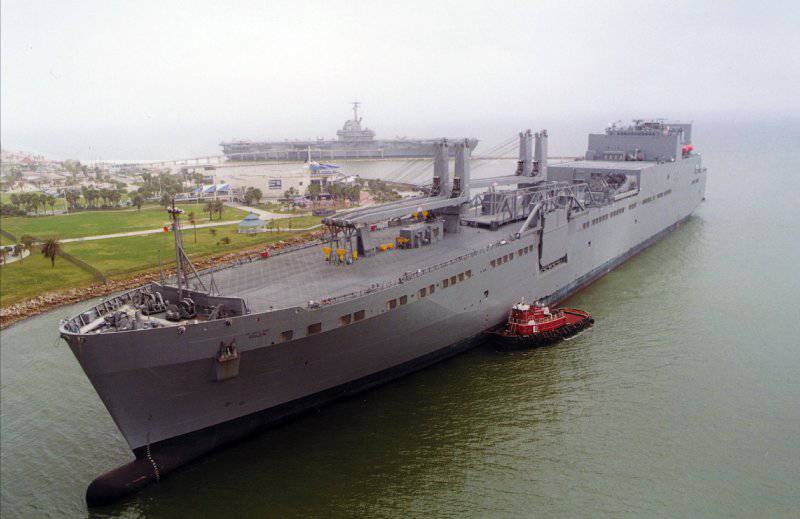 ... A yellow-blakitny fire will flare above the sea expanse - and they will find themselves on a coast, in scales, like heat of sorrow, thirty-three bogatyrs!

No, this is not a dream drunk Bandera. By evil irony of fate, yellow-blakitnye colors are symbols of Maritime Sealift Command. About these guys do not speak out loud. They do not make beautiful TV programs about them and try to less often attract media attention to them.

In peacetime, high-speed roller skaters and mobile amphibious platforms rust quietly at secret parking lots in remote naval bases - Guam, Diego Garcia, Guantanamo ... But when the time comes, the world will know what was behind the peaceful appearance of these monsters. 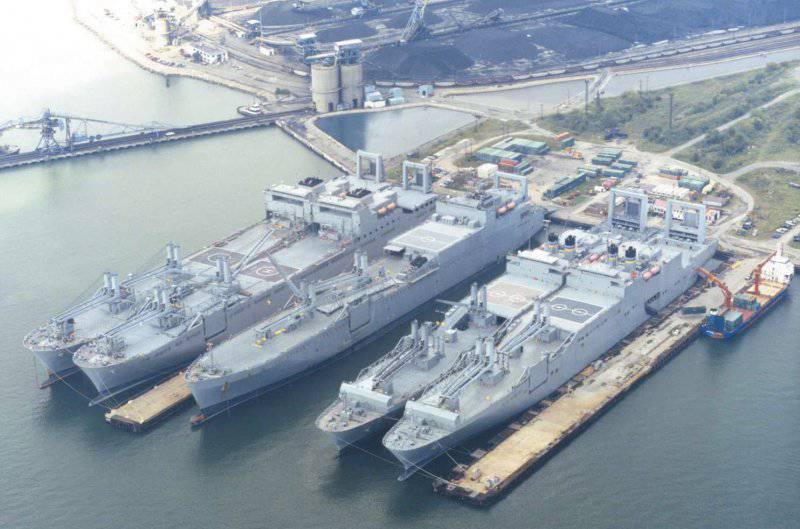 Their displacement exceeds the / and the aircraft carrier "Admiral Kuznetsov"
Standard reactivation time - 96 hours. Short transition to the specified port. And now the caravans of the Leviathans get up for loading, in order to deliver their sorrowful cargo to the other side of the Earth with lightning speed.

Almost all of them - impromptu on the basis of former civilian container ships. Yankees are buying high-speed gas turbine ships all over the world (24 and above knots) and, according to their insidious plans, make the once peaceful sea workers into lethal amphibious means capable of transferring an armored brigade or other large-size cargo to the combat zone at a time foreign shores.

What gives the basis to rank these freaks in warships?

1. Purpose Transportation of heavy loads in the interests of the army. In the first place - armored vehicles. Any UDC of the type of Mistral under discussion is just a puppy against the background of the Sealette Command rocking machine, which is able to take on the Abrams 100 at a time. While the security and defensive armament of the Rocker and UDC (MANPADS, machine guns) generally matches each other.

2. Special features not relevant to civilian courts. Sealift Command ships are capable of unloading in any conditions - in the ports of friendly states, on the unequipped coast (pontoons) and even on the open sea using landing craft and MLP platforms. Ramps on each side, cargo booms with a payload of 50 tons, boats, lighters, a helipad ... Finally, too high speed, inadequate crew size (on board are reserved for hundreds of people - military experts accompanying the precious cargo), special arrangement of holds, special energy supply - there can be no mistakes. This is a warship.

3. The appearance, symbols, names (most named after the dead US soldiers), ports of registry and sources of funding - all unconditionally indicates that we face formidable landing ships, only for fun, pretending to be "civilian container ships."

Finally, their exclusive role in the strategic military operations of the last decades. Without these super cars, neither Vietnam, nor Iraq, nor Yugoslavia would have happened - the American army would be locked up on its continent, unable to maintain a database in the Old World. 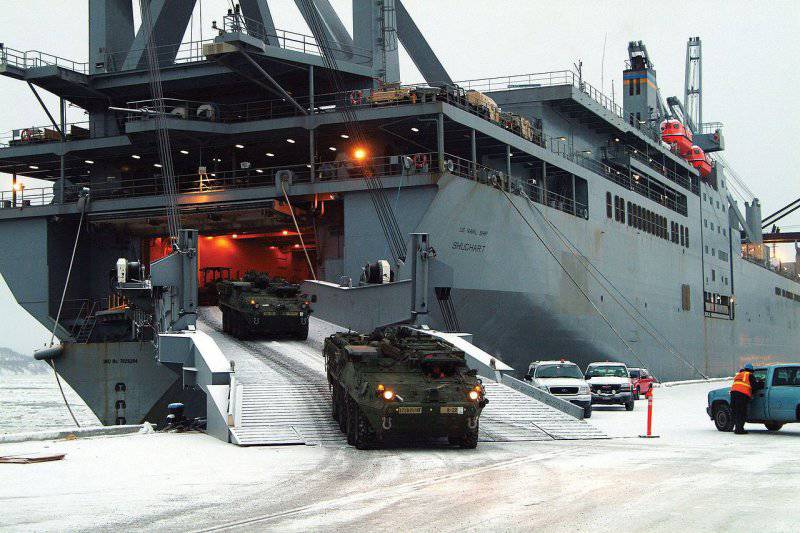 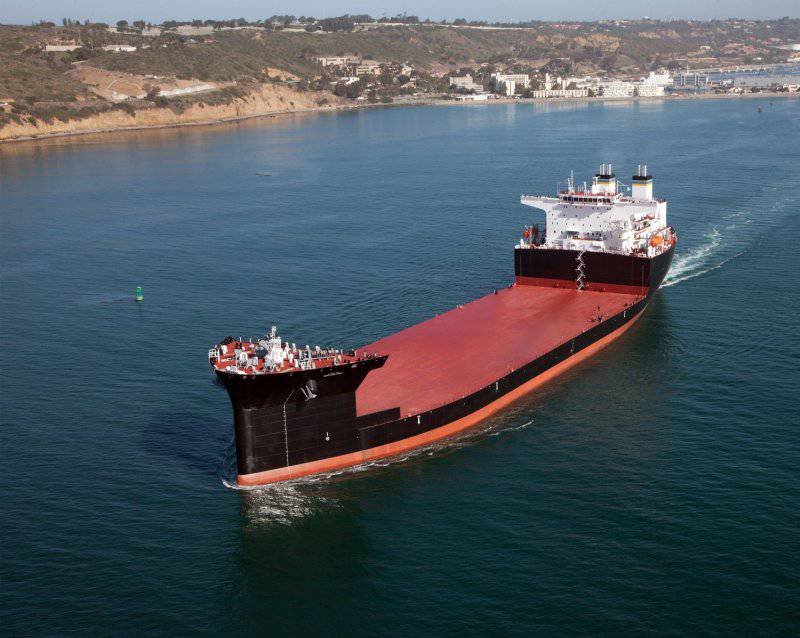 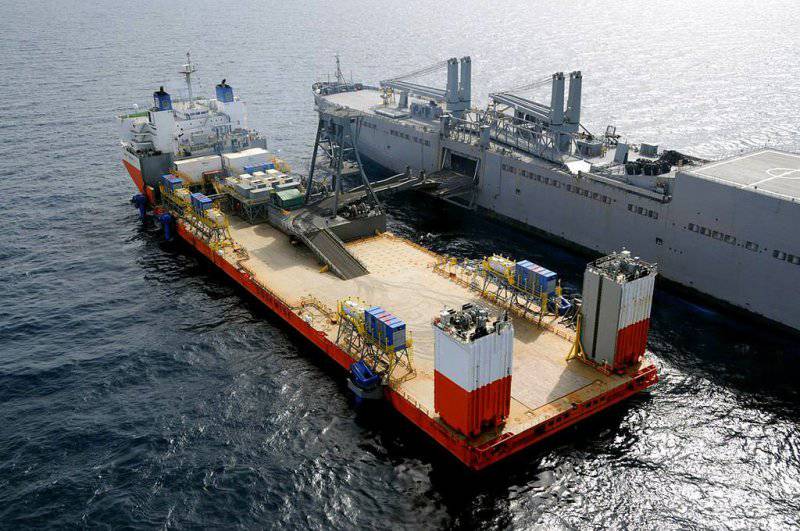 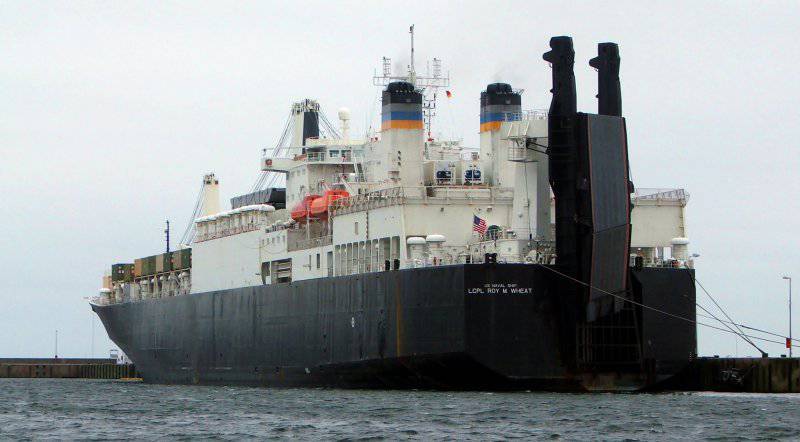 "Lance Corporal Roy Wit" (in honor of the Marine, who covered his body with a grenade) - former. Soviet gas turbine "Vladimir Vaslyaev" 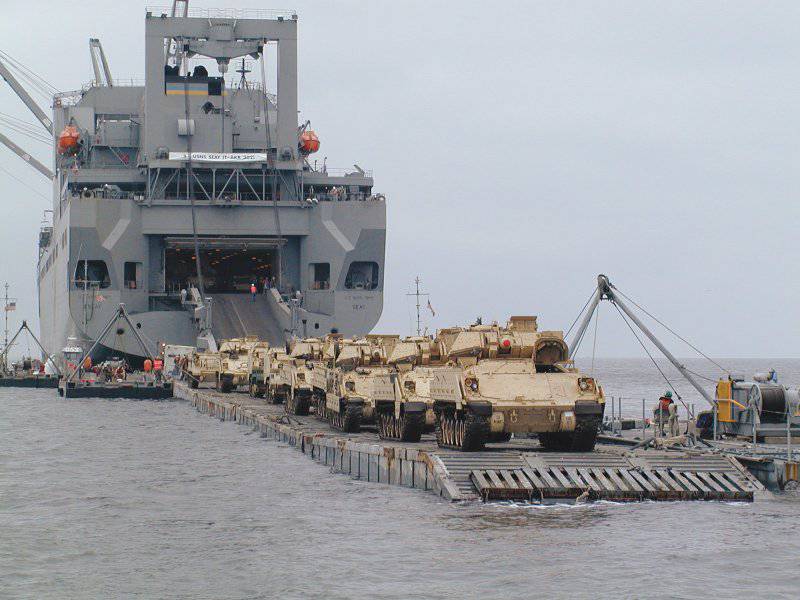