July 22 2011
3
In 1982, the Italian military decided on its requirements for the main combat tank. In 1984, the technical conditions for its production were agreed with industrial enterprises, and they began work on the main subsystems of the future machine. The first prototype of the S-1 Ariente tank was built in 1986, by 1988 the entire experimental batch of 6 vehicles was ready, which were transferred to the army for testing. By the spring of next year, tanks had already passed 16 km., And the first vehicle released surpassed the mark of 000 km. The tests were considered successful and the tanks were put into serial production. By August 6400, the Italian army received all 2002 tanks ordered.


It is worth noting that the development of the Italian tank school all the time went with a significant lag from the main competitors. In the Second World War, Italy entered with tanks that did not meet the requirements of the time. After the war, Italy formed its armored forces through the purchase of equipment abroad. It is not surprising that in the 80s, when the country needed its own MBT, the Italian designers decided to actively use the experience of German tank builders. As a result, in the appearance of С1 "Ariente" there is quite a strong influence of such tanks as the "Leopard-2" and the American М1 Abrams.

Layout of the tank

Tank C-1 "Ariente" is made according to the classic layout and practically repeats "Leopard-2". Department of management with the seat of the driver mechanic located in front and shifted to the starboard. Control of the tank by using the steering wheel. The driver's hatch cover turns and rises to the left. It features a 3 front-view periscope, one of which can be replaced with an illuminated IR periscope for driving at night. The turret of the tank is centered on the hull, it contains the 3 crew member. To the right in the tower are the gunner (in front and below) and the tank commander, the loader is on the left. In the stern of the tank is the engine-transmission (MTS) department. 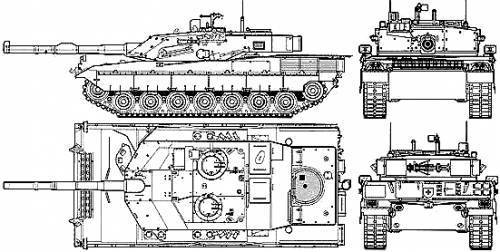 The hull and the MBT tower are a fully welded structure with a multi-layer combined armor in the bash, including its side parts, and in the upper front part of the hull, which is located at a significant angle of inclination. The tank tower is wedge-shaped in the frontal projection, with a developed stern niche. The lower frontal part, the sides and the stern of the tank have single-layer armor. Additional protection against small cumulative ammunition is performed by side screens made of reinforced rubber (6 sections per board). In this case, the size of the used frontal armor is somewhat less than on foreign counterparts. The exact levels of protection of the tank are unknown, but according to a number of foreign analysts, tank armor provides protection only against 105-mm armor-piercing shells and against the cumulative parts of most light anti-tank systems. The tank does not have dynamic protection and, apparently, it has no plans to equip it. At the same time it is planned to increase the armor due to the use of the applied modules.

The total thickness of the frontal reservation, according to experts, comes to 600 mm. At the same time, the side walls of the tower are noticeably weaker, booking is up to 150 mm. The side walls are weakened by the presence of holes (for PSF, under the hatch for ejection of sleeves). The armor of the turret sheet is even thinner, but it provides some additional protection for the tower basket for storing spare parts. In the back of the tower are 2 double wing expelling panels that ensure the combustion of shots that do not go over into the detonation of the ammunition. Between them and the fighting compartment is an armored partition. The inner surface of the tower is equipped with an anti-kevlar break-up.

The tank is equipped with a universal modular MSA TURMS produced by the Company Galileo, the same system is also mounted on the B-1 wheeled tank destroyer. A slightly modified version of this MSA with increased vertical aiming should be obtained by the VCC-80 infantry fighting vehicle. Supposed to be the first in stories the case where one type of SLA will be used on three different types of machines. Such a community, according to Italian designers, will lead to appreciable cost savings, as well as simplify the logistics of the parts. 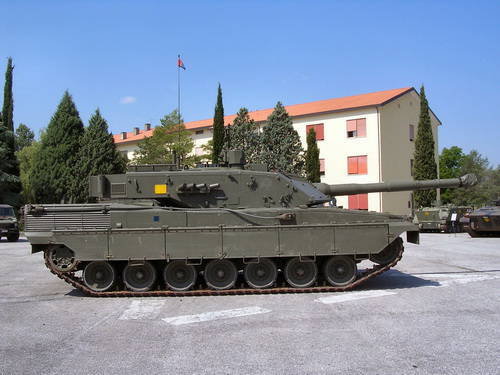 The main elements of this system are the main stabilized periscope sight of the gunner with a laser range finder, a stabilized panoramic day sight of the commander, a ballistic computer, a system of sensors for firing conditions, a system for the initial position of the muzzle and information panels of the commander, gunner and loader. The commanding sight provides 2,5 and 10x magnification. For night observation, the thermal image from the gunner’s sight is displayed on a separate display at the commander’s workplace. At the same time on the tanks of the last years of release, the commander received a separate thermal imager. Developed in conjunction with the French company SFIM, the roof mounted sight can be rotated 360 degrees and provides vertical guidance in the range from -10 to + 60 degrees, the head of the tank commander remains stationary when turning the sight head.

Mounted on the roof, the gunner's sight combines the 4 of the main module (surveillance unit, main stabilized head mirror, thermal imaging unit and laser range finder) with one embrasure, which is protected by armored shutters that can be opened in both directions. The sight provides an 5x magnification. Daytime and thermal night vision with wide and narrow fields of view is carried out through a common head mirror.

The ballistic computer is responsible for all calculations for firing, controls the telescopic sight and laser rangefinder, ensures the operation of servo drives, carries out the instrument turning to the target. The calculator provides the system with the transition from the normal control mode to the duplicate mode, in the event that a partial failure of the system elements occurs. The sensors of the TURMS system provide the ballistic computer with data on the position of the tank in space, tool wear and meteorological information. Meteorological sensor and wind sensor installed on the roof of the tank tower. 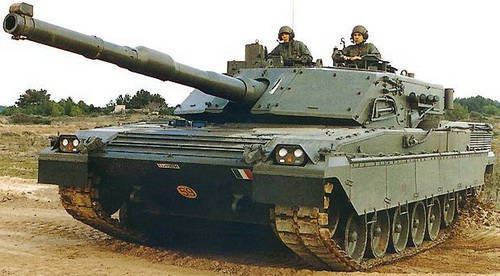 С1 "Ariente" is able to fire at fixed and moving targets from a place or in motion. The OMS allows the tank commander to transfer the detected target to the gunner, and to search for new targets himself. The duplicating gunner's sight is represented by a coaxially telescopic sight with 8x magnification and 3-me manually selectable sight grids.

The main means of defeating targets on a tank is an 120-mm smooth-bore gun with a barrel length in 44 caliber stabilized in two planes. The gun is equipped with a heat-insulating jacket, an ejector, as well as a system for controlling the initial position of the muzzle. The gun was developed by OTO Mahler on the basis of the German tank gun Rh-120, visually distinguished by a more compact ejector. In ballistics, the gun is not much different from its German prototype. The angles of inclination of the trunk range from -9 to + 20 degrees.

The camera of this gun is identical in size to 120-mm smooth-bore guns mounted on the Leopard-2 and the M1-1 Abrams, so their ammunition is fully compatible. Full gun ammunition consists of 42 shots. 27 of them are located to the left of the driver in the hull of the tank, another 15 are in the niche of the tower and separated from the crew compartment armor valves. In combat conditions, the rate of fire of the gun is 5-7 rounds per minute, after the first round projectiles are used up, it drops to 2-3 rounds per minute.

In the stationary armored vehicle to the right of the gun there is an 7,62-mm machine gun paired with it, firing from which with the help of an electric drive is conducted by the gunner, who also has a mechanical backup device. The second 7,62-mm machine gun is mounted on the turret roof and is controlled by the tank commander. The machine gun is designed for self-defense and firing low-flying air targets. The survival rate of a tank in combat is enhanced by the use of a warning system for laser irradiation. This system is combined with the Galix universal grenade launcher. Launchers installed on the sides of the tower - on the 4 on each side. 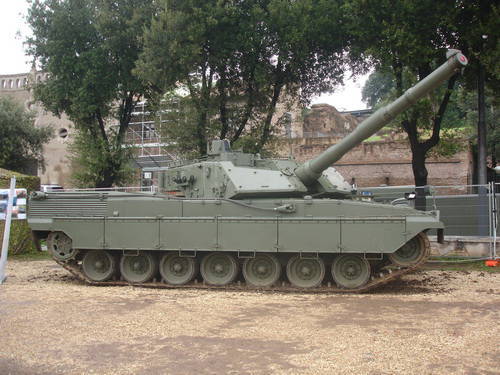 The heart of the tank is a 12-cylinder four-stroke diesel engine with water cooling and turbocharging manufactured by FIAT - Iveco. Engine power is 1200 HP Perhaps his short-term boost to 1300 hp The power density ranges from 22 to 25 HP per ton, which allows 54 ton C1 "Ariente" to accelerate to 65 km / h. Charging is carried out using two turbochargers, which are installed in the rear of the engine. The two main fuel tanks are located in the aft part of the crew compartment. Another auxiliary tank provides fuel during overcoming climbs or if the tanks are partially empty. Fuel is supplied to the engine by electrically driven pumps.

The engine is connected to an automatic transmission LSG 3000 produced by German company ZF. The transmission provides 4 forward gear and 2 reverse gear, as well as 3 radius of rotation and rotation of the tank around its axis. The device gear hydromechanical. The emergency mechanical engagement of the second gear in both directions is used as a backup device.

The torsional suspension of the tank consists of 7 double-rolled rubberized support wheels on each side and 4 supporting rollers. The forward wheel, the leading wheel - back. All rollers except the fourth and fifth have hydraulic shock absorbers. All 7 suspension balancers from each bot are equipped with hydraulic stops in order to limit the over travel of the track roller.

We are in Yandex Zen
Armored vehicles of Ukraine: results, potential, prospects ...
Wunderwaffe for Pantservaffe. Description of the design of the tank "Mouse"
3 comments
Information
Dear reader, to leave comments on the publication, you must to register.