August 28 2014
19
On Monday, the US Missile Defense Command, in conjunction with the Strategic Command, conducted a test launch of an advanced AHW hypersonic weapon (Advanced Hypersonic Weapon - "Perspective Hypersonic weapon"). The development of this product is carried out within the framework of the so-called. lightning global strike strategies. The goal of this project is to create a promising percussion tool capable of destroying a given target anywhere in the world within a few dozen minutes. Great hopes are placed on the AHW project, since it is he who is proposed as the basis for advanced weapons. 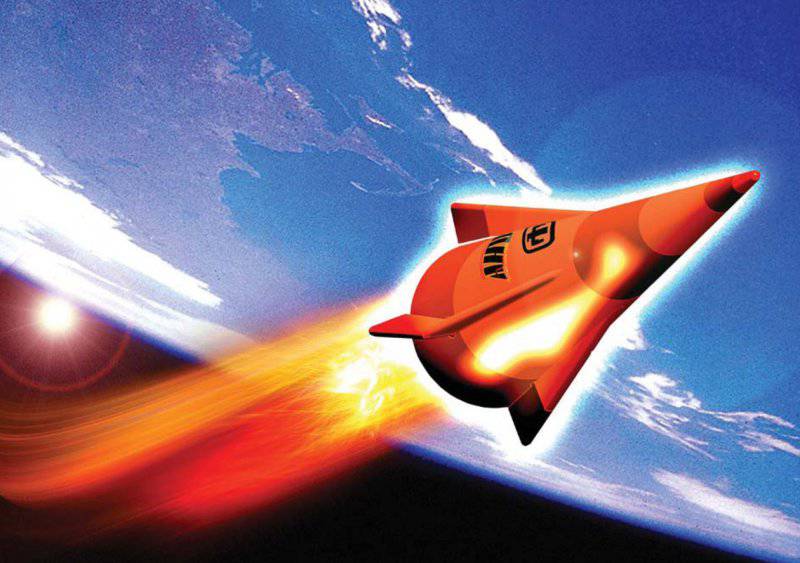 The AHW test product was launched on August 25 from the testing ground on Kodiak Island near Alaska. A prototype of a promising weapon was to fly to the Kwajalein Atoll in the Pacific Ocean. He was given about half an hour to overcome 6,2 thousand kilometers. However, the product did not reach the destination. According to official data, shortly after the launch, some problems were discovered, due to which they had to issue a command to self-destruct the device. The flight lasted only four seconds. The exact causes of the accident are not yet known. At the same time, detailed information on the course of testing is also missing for reasons of secrecy.

Now American experts are analyzing the available information and trying to find out the causes of the accident. For obvious reasons, the public should not wait for an early announcement of the results of the investigation. The collected data will be used in further work on the project, and their publication is unacceptable because of the secrecy of the project.

The recent launch of the AHW prototype became the second in the course of the project. The first test launch of a hypersonic aircraft took place in November 2011. The device started from the Hawaiian Islands and fell around the atoll of Kwajalein, flying around 3,7 thousand km. The launch was considered successful, but then, as now, the details of the work were not announced. The information collected during the first test flight made it possible to make the necessary adjustments to the project and prepare a second launch that took place a few days ago.

Information on the following tests is missing. Earlier it was claimed that the test test plan is formed as work progresses. Almost three years have passed between the first two launches, which were spent on new research and design work. Most likely, the following tests within the AHW project will take place no earlier than 2015-16. In addition, it should be borne in mind that the recent accident will affect the timing of the project and lead to their shift to the right.

Known information about the AHW project is extremely scarce. It is known that the goal of this project is to create a promising percussion system capable of destroying targets at a distance of several thousand kilometers and flying towards them at a speed 5-10 times the speed of sound. Other details of the project are still unknown.

According to some data, at present the Pentagon is financing the development of a shock system based on a launch vehicle and a hypersonic aircraft with the possibility of equipping it with a warhead. A booster rocket must output a hypersonic device to a given height and accelerate to a certain speed. After separation from the carrier, the AHW product must fly to the set target at hypersonic speed. The flight speed of this device should reach 8-10 thousand kilometers per hour or more.

Information about the combat equipment of advanced weapons is not available. A relatively small unit of conical shape can receive both nuclear and conventional warheads. In addition, we can not exclude the possibility of creating a munition, hitting the target at the expense of its energy. Given the estimated speed of the product, such a method of hitting targets looks quite real and viable. 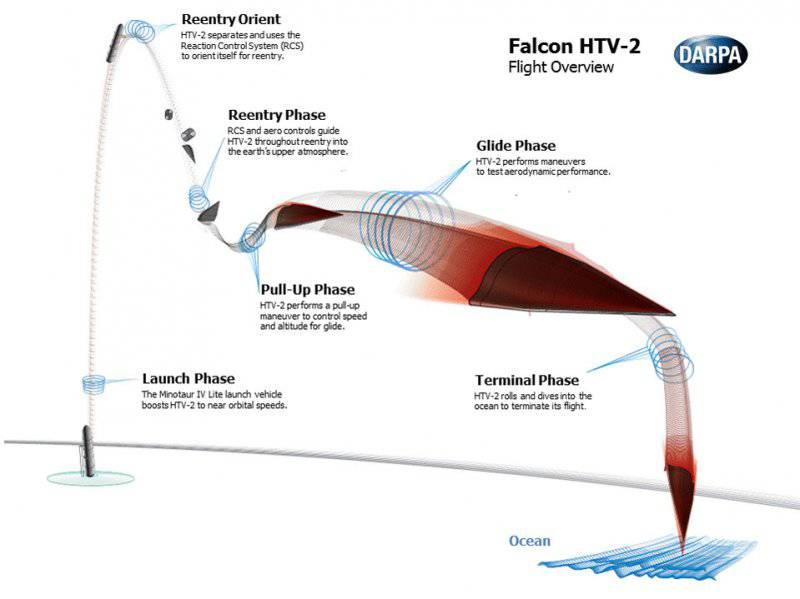 Such architecture and characteristics of the shock system will allow strikes against targets within a radius of several thousand kilometers, and will also provide flying time of no more than tens of minutes. In this way, it is proposed to ensure that the requirement to strike a given target is fulfilled within an hour and a half after the corresponding order. An interesting feature of advanced weapons is the requirement relating to the flight trajectory. According to these parameters, the AHW system should not be similar to ballistic missiles, so as not to provoke an unacceptable reaction from third countries.

The AHW project is far from real use, but American experts already know what the ideal hypersonic weapon of the future should be. To fulfill the requirement of attacking a target anywhere in the world within an hour after an order, such a shock system must accelerate to a speed of about 21000-22000 km / h and have a range of at least 23-24 thousand km. Nevertheless, the creation of such shock tools is still a matter of the distant future. Calculations show that the skin of an aircraft with such characteristics will heat up to 1900 ° C, which imposes serious restrictions on the materials used. No less difficult is the creation of means of acceleration of the aircraft to the required speeds.

The AHW project is one of the first steps towards the creation of a full-fledged combat system based on a hypersonic aircraft. The requirements for this weapon are high, which is why its creation faces serious difficulties. A few days ago, such difficulties led to the accident and the destruction of the next prototype. It will take some time to investigate the incident and finalize the project, during which there will be no new development progress reports. The future prospects of the AHW project are not yet completely clear, but the United States has the intention to complete it and use the information and experience gained to create full-fledged combat systems.