August 28 2014
6
Last Sunday, a joint exercise, Peace Mission-2014, was launched in China. The maneuvers are carried out within the framework of the Shanghai Cooperation Organization (SCO) and are designed to work out joint actions of the armed forces of the five states. More than 7 thousands of troops from Russia, China, Kazakhstan, Kyrgyzstan and Tajikistan have arrived to participate in exercises at the Chinese test site. The training ground for the exercises was the Zhuzhihe training ground in the autonomous region of Inner Mongolia. The exercise will last until August 29. 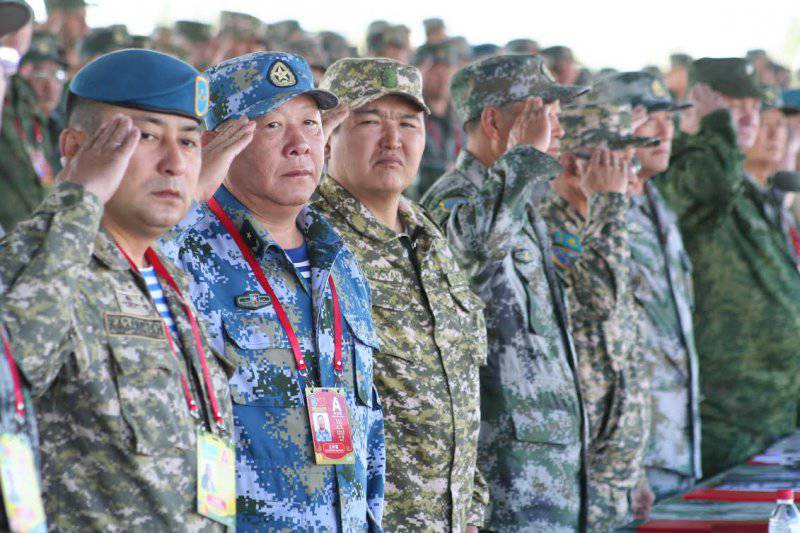 The military personnel of the SCO countries arrived at the Chinese training ground a few days before the start of the exercise. For example, the fourth and last Russian echelon arrived in China on August 19. Russia at the Peace Mission-2014 exercises is represented by about a thousand soldiers - the battalion tactical group of the 36-th separate motorized rifle brigade of the Eastern Military District. In addition, eight Mi-8AMTSH helicopters and several airplanes take part in the exercises, the task of which is to support Russian troops in training battles against a conventional enemy.

The main goal of the current exercises is to work out joint actions and strengthen coherence between the forces of several states. The SCO member countries intend to strengthen cooperation in the defense sphere, in particular in the field of combating terrorism and other threats. In the current exercises "Peace Mission-2014", the troops of five SCO countries participate. For certain reasons, the armed forces of Uzbekistan refused to participate in the maneuvers. Observers from several countries arrived in the Chinese test site: Afghanistan, India, Iran, Mongolia and Pakistan.

24 August opening ceremony of the exercises. Flags of the SCO member states and the organization’s flag were raised in a solemn atmosphere. The leaders of the exercises made speeches and declared the exercises open. The management of the activities is carried out by the international headquarters, the head of which is appointed Deputy Chief of the General Staff of the PLA, Lieutenant General Wang Ning. The Russian side in the leadership of the exercises is represented by Lieutenant-General Vladimir Tsilko.

About a thousand military personnel participate in training battles from the Russian side and use about 60 units of various armored vehicles, including 40 BMP-2 and 13 T-72, as well as several types of artillery systems. Aviation It is represented by Mi-8AMTSh helicopters, 4 Su-25 attack aircraft and 2 Il-76 military transport aircraft.

25 August, the press service of the Russian Ministry of Defense announced the start of training and combat work of the Russian gunners. On Monday, the calculations of artillery guns, arriving from Russia, conducted the first combat training with the use of high-precision shells "Krasnopol". The artillerymen received an order to destroy the armored equipment of the conditional enemy located at distances from 7 to 11 km. In the firing used guided munitions, as well as shells with a radio fuse. The explosion of ammunition at an altitude of about 50 m made it possible to effectively “cover” the targets of a conditional opponent with a multitude of fragments.

Interesting activities within the framework of the exercise were the “Days of National Culture”. So, August 26 held the "Day of the National Culture of Russia". On the territory of the Russian field camp a stage was set up and places for spectators. According to the old custom, the guests of the Day of Russian National Culture from other countries were greeted with bread and salt. During the holiday, Russian servicemen showed their hand-to-hand fighting skills. At the end of the event a concert was held with the participation of the military orchestra and the song and dance ensemble of the Eastern Military District. A surprise for the audience was the performance of the song “Moscow Nights” in Chinese. All guests received souvenirs with Russian symbolism. Similar “Days of National Culture” were held by the other four countries participating in the maneuvers.

On Tuesday, several episodes of the exercises aimed at testing the joint work of troops from several countries took place. Four episodes were carried out: reconnaissance and tracking of the situation, a joint attack on the targets of a conditional enemy, the fight against terrorists in urban conditions and the pursuit of the enemy in the mountains. Russian motorized riflemen participated in these episodes of the exercises with the support of tanks T-72, BMP-2 infantry fighting vehicles, as well as attack aircraft and helicopters. In several cases, motorized rifle assisted artillery calculations.

A meeting of the Chiefs of the General Staffs of the Shanghai Cooperation Organization countries is scheduled for 28 August. Russia will be represented at this event by Army General Valery Gerasimov. During the meeting, military leaders will conduct an analysis of cooperation within the SCO over the past year. In addition, issues of further interaction of countries will be considered. The subject of discussion will be the various aspects of security and possible threats.

On the last day of the exercise, August 29, the final stages of the maneuvers will be held, during which all five military groupings of the SCO countries will work together and perform common combat training tasks. Fights with a conditional opponent, scheduled for Friday, will be the culmination of the exercise and will show the real level of capabilities of the troops and their potential in terms of teamwork.