Problems of the Russian defense industry 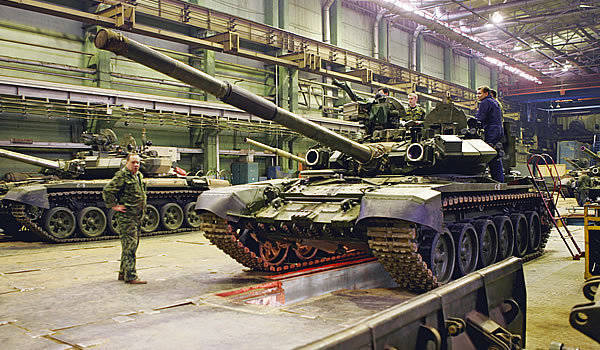 Recently, criticizing the Russian defense industry has become a fashionable trend: corruption, overpricing of products, inability to develop and manufacture modern weapons that would be responsible for keeping the country safe from real modern threats are the main “points of accusation”. The main department, the Ministry of Defense, also gets it: a significant reduction in the number and disorganization of military units and industrial facilities, modernization of obsolete military equipment to replace the purchase of new and promising, placing orders abroad.

The continued weakening of our country's defense capability is an unbreakable topic for discussion in the media and society as a whole. The Ministry of Defense under Anatoliy Serdyukov effectively alienated from the interests of the domestic defense industry, taking up the position of a client in the market. And all sorts of PR around the treaties with foreign gunsmiths held in almost everything is subordinate to one thing - to give a basis for reflection. We need, indicates the military department, such weapon and at that cost. Not ready? Then we go to Germany, since the purchase must be made and we, for all that, do not care if you can sell this product or you don’t want to.

Over the past decade, the Russian defense industry has taken a number of measures to centralize regional governance and consolidate financial assets. A whole set of embedded holding structures has been formed. Others of them became “natural monopolists” in their own market sectors, absorbing the production and design potential of Russia. Not many of these structures are striving to improve their work, but increasingly use the previously accumulated achievements of Soviet enterprises and design bureaus.

However, the pricing task of the GOZ performers was not only not resolved, but, on the contrary, worsened. The defense ministry often asks its own contractors to disclose the entire cost structure in order, on the one hand, to check the correctness and reasonableness of the markups winding up in different parts of the process chain, and on the other hand, work with the contractor on balancing the given chain, find out the “bad places” of the business in the defense industry. But in the opening of the components of prices in the defense industry are not in a hurry, this is a kind of “taboo”. Unfortunately, the manifestation of a kind of philistinism remained in the blood of our high-ranking officials, much less modern nouveau riche.

In that case, if you don’t go into details, then you get the feeling that, despite the annual increase in the military budget, “they are still there” - missiles do not reach their targets during tests, fighters fall with regular regularity, and at the technical level, sophisticated weapons begin to acquire abroad. However, in order to realize how these visible processes are a reflection of the state of the system as a whole, it is necessary to look at the real history defense science and industry over the past two decades.

Since the collapse of the Soviet Union in the 1990s, virtually the entire Russian industry, including the military, has been virtually completely destroyed. The only exception was the oil and gas, food and mining industries. Of the 24, thousands of industrial companies working partly for military purposes and producing essential dual-purpose products have survived only 1200. With all this, all these factories and plants, having no funding, have not progressed - either on a technical level or mentally. While they were "standing still", military special technologies in competing advanced countries took a step forward. And in the midst of more than 5,6 thousands of research institutes and hidden research centers engaged in the development of modern military special technologies, only 677 remained, and then in a weakened form - without qualified personnel, without the current technical base. Of the 126 thousands of experts of the A1-A3 classes (by organizing the ILO) employed in the defense industry in Russia in 1990 (we are not talking about the USSR in total), 102 thousands, or more than 80%, left to work in foreign countries and are not going to return .

William Fokkingen, who is responsible for international military-technical and defense industrial cooperation at the Pentagon, said in June 2000 at a state security conference: “According to our estimates, less than 6% remained from the defense potential of Russia. If current trends continue, 5 will remain in 0 years. ” In 1999, the defense budget was only 3,8 billion dollars - the amount currently spent on paying for the 2's land brigades. And the costs of R & D development over the years were equated to zero.

And now tell me how the system created over half a century and which is roughly 100% destroyed, and only at the expense of political freedom and start-up investments can it be revived in a couple of years. It is not even a question of restoring lost technologies in any way, but also of modern development. In world history there was only one example of the miracles of industrialization - in the era of Stalin in the USSR. However, it was associated with mass violence against residents of the state. Now, in times of democracy and human rights, only an evolutionary path of improvement is available - the effective use of available monetary and mental sources.

Over the past 10 years, the power of the state contrived from among those ruins that it inherited, to build again the system of the military-defense industry - with a distinct hierarchy of scientific, industrial and design centers. However, the indicator of the defense capability of Russia on the systematization of Defense Review grew from 12,4 in 2000 (46-th place in the world) to 49,8 in 2010-th year (6-th place). The growth of the state defense order over the past 11 years was 5600%! During this period, special educational programs developed by the military-technical commission of the Ministry of Defense were introduced at 104 universities of the state. In leading research institutes that have retained their own scientific potential, at least to some extent, the wages of workers have been increased several times. For example, now the average salary of an ordinary design engineer in the St. Petersburg marine design bureaus is 55 thousand rubles, in the “rocket” research centers of Moscow - more than 70 thousand rubles.

Plant "Elara" - one of the most successful and relevant. Its products are avionics, in other words, mental systems for almost all types of military and civil aircraft. From navigation and control - to the military sight. This set is the author's development and real pride of the factory workers. Prepared for fighters and attack aircraft. In addition to the stuffing of state-of-the-art electronics, the designers were able to reduce its weight from the first options in 200 kilogram to 17 kilogram today.

"The remote control system was created to control the aircraft so that the pilot did not distract from the performance of the combat mission. In fact, this system is mental - it controls the aircraft itself," said Ilya Sharov, deputy technical director for special technology.

Capacitors, transistors, microchips are the element base on which the accuracy and safety of devices in combat aircraft directly depend. In recent years, the quality of manufactured radio components has dramatically dropped. The country is no longer in control of this area. Those who were responsible for the quality of work of enterprises producing radio components were simply reduced. The deterioration of the quality of components affects not only the production in the section of the time frame, but is also reflected in the total cost of the product.

At the same time, despite all the problems associated with the outflow of competent specialists abroad and the loss of thin threads of special technologies that were lost in the nineties, Russian gunsmiths still manage to start up and gradually, but reach the level of the modern 5th generation of weapons. The state defense order for 2011 exceeds 0,5 trillion rubles, considering the purchasing power parity - this is the third place in the world after the United States and China. And the state program for rearmament of the army until 2020 expects an increase in this indicator to a high of 1,2 trillion rubles. The idea is primitive: in the innovative and industrial development of the state, in aggregate, the leadership has relied on the domestic defense industry as having the greatest potential for making a progressive technological breakthrough. In the industries in which we are hopelessly lagging behind - control and communication systems, computer electronics, cybertronics, robotics - the Ministry of Defense makes up for its needs by purchasing the latest special technologies abroad. For example, the Mistral landing craft capable of carrying helicopters on board was purchased specifically to master the promising and recognized best management system in NATO countries fleet and armament Senik 9, the transfer of which was actively opposed by the allies of France in the military alliance. DCNS transfers together with the ships all the technological documentation, which makes it possible to copy all the implemented special technologies, as well as secret combat control codes. The same applies to modern unmanned aerial vehicles purchased in Israel. However, the import of special technologies is needed only in 10-15% of cases. The rest of the armaments and equipment manufactured at Russian enterprises are either not inferior in quality to foreign analogues, or superior to them.

Of the 12 states that are trying to create a 5th generation fighter, investing $ 10 billion, so far only two have actually succeeded - the United States and Russia. The Chinese counterpart, which shortly, like ours, made the 1st flight, in reality does not meet the requirements of the Air Force for the 5th generation of the frontline aviation. The Russian T-50 (PAK FA) not only meets these requirements, but even surpasses an overseas opponent in some respects. F-22 Raptor has the highest cruising speed of 2 thousand km / h, T-50 - 2,4 thousand km / h, our aircraft has a sufficient runway length of only 300 meters, overseas needs 450. It also surpasses the F-22 in flight maneuverability. By the way, Raptor is so expensive ($ 140 million) that the US in 2010 stopped its creation. And the Sukhoi company, which made the 5th generation Russian fighter, on the contrary, plans to produce it, not only for domestic needs, but also for export.

Of course the strength of any weapon depends on what technology is used in the manufacture. Soviet and now Russian gunsmiths have always been leaders in this matter. The same Americans have always recognized the advantage of Russian armaments and, as a rule, their systems and armaments came out with some temporary delay. The same China, in fact, does not have its scientific military base in the defense industry, their main successes are copying the weapons systems of Russia and the United States and the subsequent release of weapons under their own brand. But there is one thing, but both the United States and China are spending billions of dollars, some on the development of new systems, others on the purchase for subsequent re-copying, but in Russia the situation is somewhat different. So the necessary money is not always allocated in full, which makes for delays in payment, and sometimes to the abandonment of already concluded contracts. It is believed that these are all temporary difficulties given the fact that the current Russian government is aimed at reviving the military-industrial complex of the state.

We are in Yandex Zen
Projection of force
Are there any prospects for the Ukrainian military-industrial complex?
5 comments
Information
Dear reader, to leave comments on the publication, you must to register.