August 31 2013
227
This tank was first shown at the Eurosatory 2010 exhibition of the year by the German company Krauss-Maffei Wegmann (KMW). 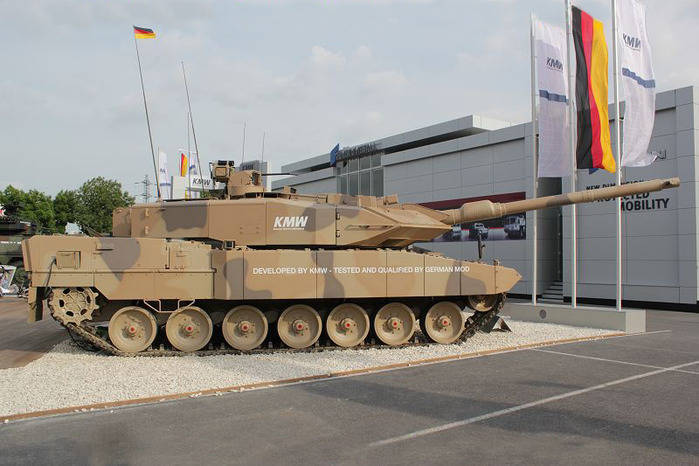 The updated tank is optimized for use both in conventional combat operations and for operations in the conditions of the city.

KMW at the exhibition announced that the Leopard 2A7 + is a modular update package that can be optimized to meet the specific needs of users. The version shown on Eurosatory is the top level of the Leopard 2A7 +, which uses all the modernization options, resulting in a combat weight tank is about 67 tons. 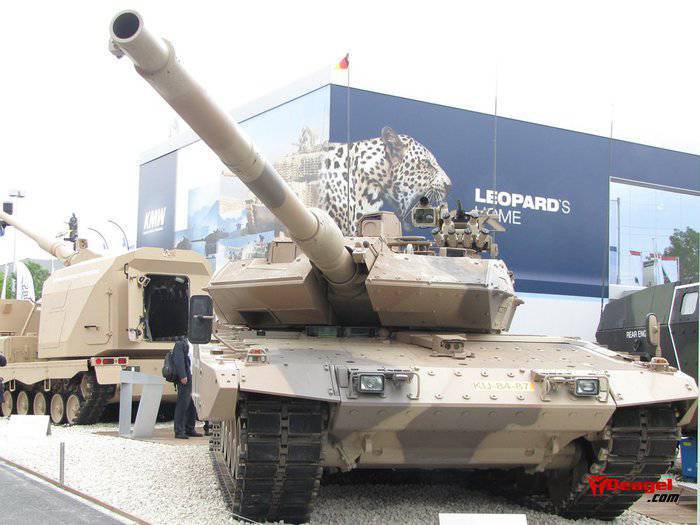 The upgrade package includes installation on the roof of the turret of the combat module with a remote control KMW FLW 200 with a machine gun of the 12,7 caliber mm, as well as an 76-mm grenade launcher. To increase survivability (especially from RPGs), additional passive armor was installed along the frontal arc, as well as along the sides of the hull and tower. Together with the main modifications of the changes in the hull and the tower, an additional reservation is placed on the bottom of the hull. Situational awareness is provided through a full review of 360 degrees for all crew members - the commander, gunner and driver, through improved thermal imaging cameras.

To improve the living conditions at high temperatures in the aft tower installed air conditioning system. To provide power for the onboard equipment, an auxiliary power unit of increased power was installed in the right rear of the hull. In the back of the case is equipped with a place to connect infantry phones. If necessary, the tank can be equipped with a blade.

The Leopard 2A7 + upgrade package, together with the extended reservation package, was developed and tested in close collaboration with the German army, which is expected to update at least part of its fleet of 225 Leopard 2A6 and 125 Leopard 2A5 to this standard after resolving the issue of financing. Some sources mention about 150 modernization plans in total. Other members of the Leopard 2 club have also shown interest in the new product. 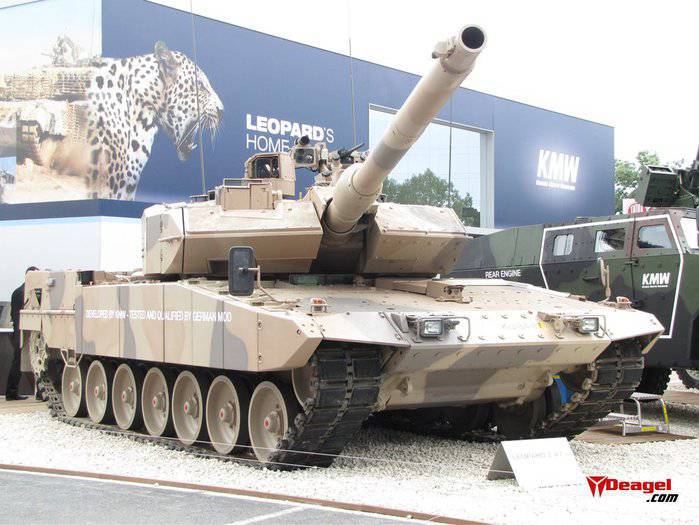 "... Much more interesting is the second project of German tank builders, positioned as a revolution in the modernization of the OBT. Demonstrated at the Paris salon MBT Revolution was a deeply modernized Leopard 2A4. The main directions of improvements designed to turn the 1985-1992 produced in the modern tank, able to withstand virtually all existing challenges, the following:

- a dramatic improvement in protection, overhead elements covering the entire turret and frontal part of the hull, as well as two-thirds of the side (i.e., fighting compartment) should protect the tank from shots of all types of grenade launchers and above all RPG-7, from mines, improvised land mines, striking elements cluster munitions, OBPS, anti-tank missiles with optical-electronic, infrared and laser guidance systems;

- implementation of the “digital turret” technology, that is, the introduction of modern display tools, network solutions and components into the LMS, allowing tracking of the movement of their troops and enemy forces in real time, all-day observation and aiming devices, providing the crew with an almost all-around view from armor: all this will allow tankmen to reduce the response time to a particular threat;

- improving the characteristics of the SLA, so that the tank could hit targets with the very first shot, especially in motion;

- the introduction of a “commander” brake into the design of the machine, which allows the senior crew member to stop the tank from his workplace if necessary: ​​this function is positioned as very useful when moving a multi-ton mastodon through the city streets, largely depriving him of the well-known awkwardness of the elephant a china shop; 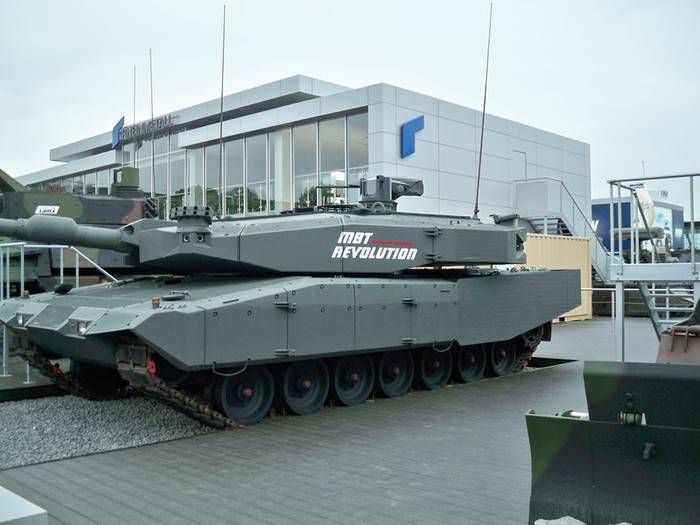 - the use of a communications system that allows the crew to exchange information with the surrounding infantry;

- introduction into the design of an auxiliary power unit, which supplies electricity to numerous electronic systems without the need to turn on the main engine: this not only saves the service life, but also reduces the thermal and acoustic visibility of the machine;

- installation of equipment designed to incorporate each main battle tank into a single automated rear support system: this greatly simplifies and speeds up the process of providing tank units with ammunition, fuel and other rear assets.

The set of proposed changes is more interesting than in the case of Leopard 2A7 +. True, it is impossible not to note two features that can be viewed as flaws: obviously, the high cost of alterations and a significant increase in the mass of the tank, getting out of the limits of sixty tons. That is why you should consider the individual elements of the modernization program MBT Revolution in more detail. 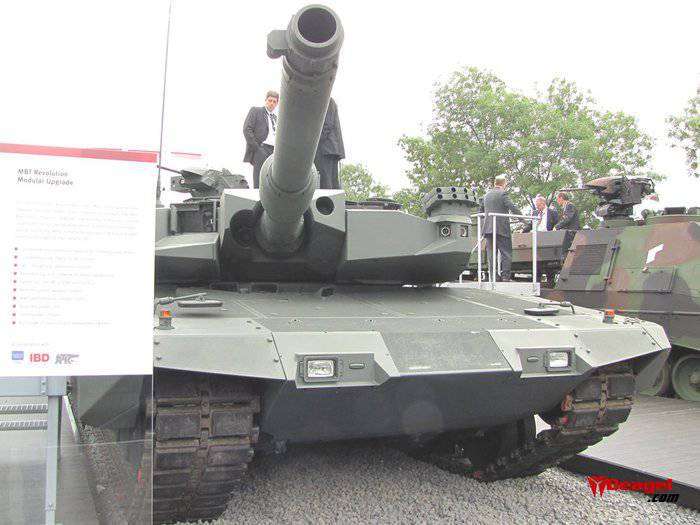 One of the most important factors in enhancing the security of a machine is the ROSY smoke screen system developed by Rheinmetall. It not only forms a multispectral smoke cloud on the detected radiation direction in less than 0,6 seconds, but also forms a dynamic smoke “wall” allowing the tank to quickly evade defeat in the event of a massive approach of anti-tank missiles.

The onboard equipment of the tank includes an optoelectronic detection system stabilized in two planes. It consists of a thermal imager, day camera and laser range finder. Necessary to the commander and the gunner to assess the situation data - the goal, the distance to it, the type of ammunition, the state of the system itself - are displayed on the display in the fighting compartment. On it can be displayed as a circular panorama of the battlefield, and its fragment, visible through a normal sight.

Constant circular surveillance of the battlefield, reducing the burden on the commander and gunner, is provided by the information system (SAS). Its functions include the automatic detection and tracking of potential targets. SAS consists of four optical modules (although to reduce the price of a modification, only two of them are allowed) at the corners of the tower, each of which has three lenses with an angle of view of 60 degrees, as well as a high-resolution color camera and night vision components. To reduce the crew’s response time to a threat, information about the SAS target detected can be immediately transmitted to the SLA, primarily to the new-generation Qimek remote combat module located on the roof of the tower. 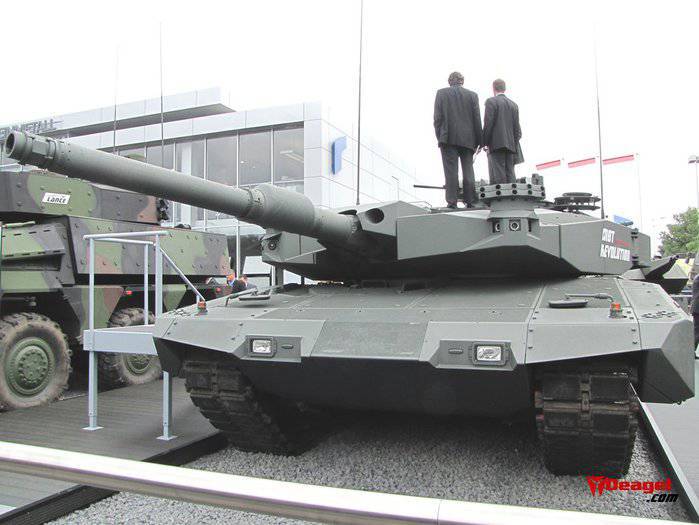 The composition of the ammunition upgraded tank is proposed to include new types of ammunition. In addition to the DM 11 high-explosive fragmentation projectile already mentioned, this is a feathered sub-caliber projectile with a separating pallet DM-53 (LKE II) 570 mm long, equipped with a tungsten alloy core (adopted for 1997), its modification DM-531 and further development DM 63. The last two munitions are positioned as the first in the world ITS, maintaining constant ballistic characteristics regardless of the ambient temperature. According to the developer, shells are optimized specifically for punching "dual" reactive armor and can hit all types of modern tanks head on. These armor-piercing ammunition can be fired from 120-mm smooth-bore guns made by Rheinmetall with a barrel length of both 44 and 55 calibers. 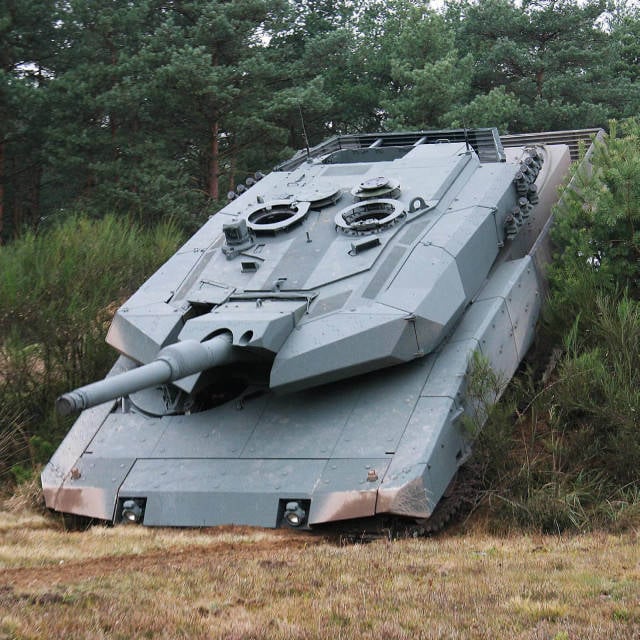 The onboard equipment complex is integrated into the INIOCHOS ACS of the tactical level, developed by the same Rheinmetall company and allowing to distribute information from the brigade commander to a separate soldier or combat vehicle. This system is used in the armed forces of Greece, Spain, Sweden and Hungary. All of them, with the exception of the sun last, have in their arsenals and various modifications of the Leopard 2.
Thus, the modernization of the tank, carried out under the MBT Revolution project, makes it possible to transform an armored monster, the creation ideology of which provided for conducting tank battles in the image and likeness of the battles of World War II, into a modern machine equally well prepared for both battles with enemy tanks and guerrilla formations possessing only mobile anti-tank weapons. The latest developments in the field of electronics, optics, communications give the crew, instead of very limited in angle of view and range, fragmentary “pictures” in periscopes and sights, a complete panorama of the surrounding space, reflecting the enemy’s location and maneuvers of his unit. The concept of a digital tower actually helps the crew to look through the armor. But it is precisely this property that is one of the most important when creating a new generation tank with an uninhabited turret and armored capsule for the crew, which was conceived by the domestic T-95. " 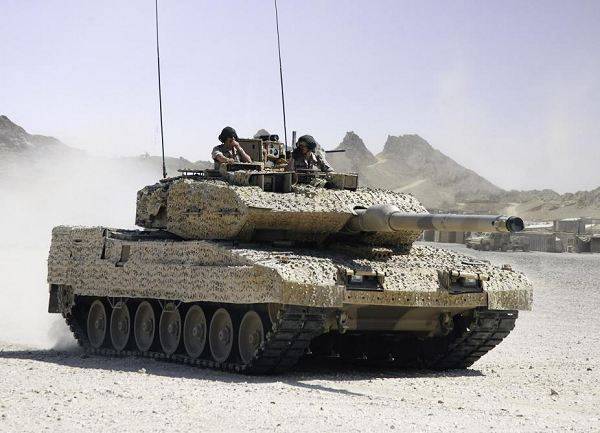