30 2014 June
14
June 17 in Ulyanovsk, an event of great importance for the domestic aircraft industry. The first serial Il-76MD-90А serial military transport aircraft (serial number 01-03) was removed from the assembly shop of the Aviastar-SP plant. The aircraft is already equipped with all the necessary systems and equipment. Not so long ago, the caisson of the center-section and wing were tested for leaks. The constructed aircraft was transferred to the company "Spectrum Avia", which will carry out all the necessary painting work. After that, the first production aircraft of the new model will be handed over for testing. 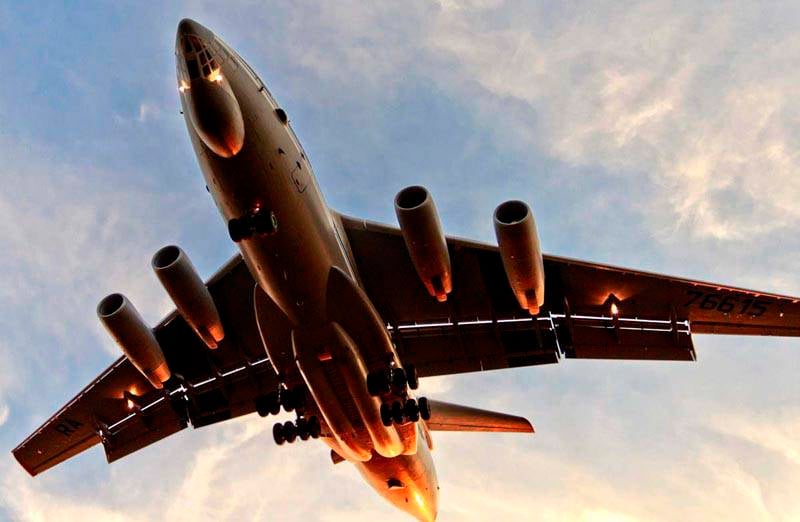 The new IL-76MD-90А aircraft was built under a contract dated 5 on October 2012. According to this document, before the 2020, the Ministry of Defense should receive 39 aircraft of this type, with the transfer of the first two production vehicles scheduled for the 2014 year. The total contract value is 140 billion rubles. The Il-76MD-90А military transport aircraft in the future will have to gradually replace the outdated Il-76 family of vehicles. In the course of modernization, the aircraft received new PS-90А-76 engines, new radio-electronic equipment and modified structural elements. The result was a noticeable increase in performance.

The Ulyanovsk Aviastar-SP aircraft factory has already prepared for the full-scale construction of new aircraft. However, it should be recognized that the contract work of the Ministry of Defense faces a number of serious problems. Moreover, a new project was constantly pursued by various problems, and even it was developed as a response to the arising difficulties of a production and economic nature.

The deployment of the construction of a new type of military transport aircraft at the Ulyanovsk aircraft factory was in a sense a necessary measure. Since the beginning of serial production, IL-76 aircraft have been built only at the Tashkent Aviation Production Association. V.P. Chkalov (TAPOiCH). The vast majority of these machines (more than eight hundred) were built before the collapse of the Soviet Union. After the formation of an independent Uzbekistan, the pace of work at TAPOiCH plummeted. The interaction of various enterprises involved in the construction of aircraft, it was difficult, and the number of orders has declined sharply. As a result, at the beginning of the two thousandth year, the Tashkent enterprise stopped the construction of new IL-76. To save part of the jobs, the aircraft factory was forced to switch to the production of various civilian products.

Russia and Uzbekistan in the middle of the two thousandth made an attempt to keep TAPOiCH and production on it. In 2007, Moscow proposed to include this aircraft plant in the Russian United Aircraft Building Corporation, while maintaining control from the Uzbek side. The leadership of the two countries found a common language in this matter, after which preparations began to conduct all the necessary procedures. However, specific economic events soon occurred, due to which Russia refused to include TAPOiCh in the KLA. Due to the difficult situation of the company in 2010, the bankruptcy proceedings started. In the middle of 2011, the official Moscow announced its final decision: TAPOiCH will not become part of the KLA. Soon the Tashkent plant ceased to exist.

Seeing the difficult situation of the Tashkent Aviation Production Association, the leadership of the Russian aircraft industry in 2006 year decided not only to create a new modification of the IL-76 aircraft, but also to expand its production in the domestic enterprise. The Aviastar-SP plant in Ulyanovsk was chosen as a platform for building a new aircraft. Previously, this company built heavy An-124 Ruslan heavy military transport aircraft and had some experience in the production of this class of equipment. Nevertheless, since the mid-nineties, the state of the plant left much to be desired. Like many other aircraft factories in the country, Aviastar-SP actually stood idle without orders.

In preparation for the start of construction of a new transport aircraft, the Ulyanovsk enterprise got the opportunity to upgrade its production facilities. According to the available data, the procuring and mechanoframe production has been substantially updated by now. In addition, about one and a half thousand different outdated machines were decommissioned and new equipment was purchased. There are well-developed plans for the development of aggregate-assembly production. In the near future, it is planned to transfer the project documentation for the IL-76MD-90А aircraft assembly line for examination. As expected, such a modernization of production will seriously simplify the process of building aircraft. It is assumed that the complexity of the construction of machines will be reduced by about four times in comparison with the first production aircraft.

The military transport aircraft Il-76MD-90А, whose serial construction started in Ulyanovsk, are pinned great hopes. Transport vehicles of this type will have to replace in the air force the outdated equipment of the IL-76 family. In addition, it is planned to create on the basis of the IL-76MD-90А a new tanker aircraft and a radar early warning and control aircraft. Until the end of 2014, it is supposed to transfer to the customer, represented by the Ministry of Defense, two new aircraft, in 2015, three, in 2016, six, and from 2017, construction should exceed 15 products per year.

However, not everything is so good and there are certain problems. The IL-76 aircraft modernization project constantly encountered various difficulties that have not yet been completely eradicated. One of the main problems at the moment - the lack of skilled workers in the workplace. In the eighties, at the Ulyanovsk aviation-industrial complex, later transformed into the Aviastar-SP plant, it worked up to 40 thousand people. As of 2012, the number of employees was four times less. Such a reduction in the number of workers could not affect the state of the plant.

To make up for losses in 2010, Aviastar-SP and the leadership of the Ulyanovsk Region created a resource center for training personnel. In 2012, the Center received a license and engaged in advanced training for aircraft factory employees. In order to attract new people to the industry, schools are being created in Ulyanovsk and the region aviation circles that should interest the younger generation and attract them to work in the aircraft industry.

While all the measures taken do not allow to completely fill the personnel shortage. Aviastar-SP was forced to launch a program to attract specialists from other regions of the country. In addition, skilled workers are sought in foreign countries. First of all, it is Ukraine and Uzbekistan, where large aircraft factories engaged in the construction of military transport aircraft used to work. Potential employees of the plant are offered various assistance, including payment of relocation of a specialist and his family, as well as reimbursement of expenses for new housing.

Measures to attract foreign experts have already led to the first results. The Expert Online publication cites the words of Vadim Oveychuk, Director of Human Resources at Aviastar-SP, according to whom about a hundred new employees from neighboring countries should settle down in Ulyanovsk in the near future. To date, about a quarter of these people have found work. In the future, the number of foreign workers who moved to Russia is likely to increase significantly, which may be due to the difficult situation of aircraft manufacturers in some CIS countries.

The measures taken to restore and modernize the production capacities of the Aviastar-SP Ulyanovsk enterprise in the future should allow it to reach the required pace of construction of new military transport aircraft. Full restoration of the plant’s potential will require new time, effort and money. However, the objectives of current programs fully justify all costs. At the same time, we should recall the sad fate of the Tashkent Aviation Production Association. This enterprise, left without orders, due to the absence of any government policy aimed at its preservation, ceased to exist. As for the Ulyanovsk plant, recent events allow us to make positive predictions about its future.

Ctrl Enter
Noticed oshЫbku Highlight text and press. Ctrl + Enter
We are
The action “Military service under the contract is your choice!” In Rostov-on-Don: future contract servicemen, exhibitions and “Russian Knights”How the IL-76MD-90А was created
Military Reviewin Yandex News
Military Reviewin Google News
14 comments
Information
Dear reader, to leave comments on the publication, you must to register.