25 2014 June
63
The militias of the unrecognized Donetsk People’s Republic and the Luhansk People’s Republic regularly “boast” of new weapons and military equipment taken as trophies. Republic militia received and continues to receive weapon and the technique, both relatively peacefully, from surrendered enemy fighters, and repels them during armed clashes. In addition, several cars were removed from storage and restored.


A few days ago it became known that a new military equipment appeared in the LPR army - Tanks T-64BV. To date, Lugansk fighters were able to repel several armored vehicles of this type. It should be noted that these vehicles are precisely the trophy of the LPR militia, although the Ukrainian media, loyal to the current government, offer a different version of the appearance of these vehicles in Lugansk. In their opinion, earlier these T-64BV tanks were in the Crimea and after known events went to Russia. The latter, supporting the "terrorists", passes them the former Ukrainian armored vehicles. 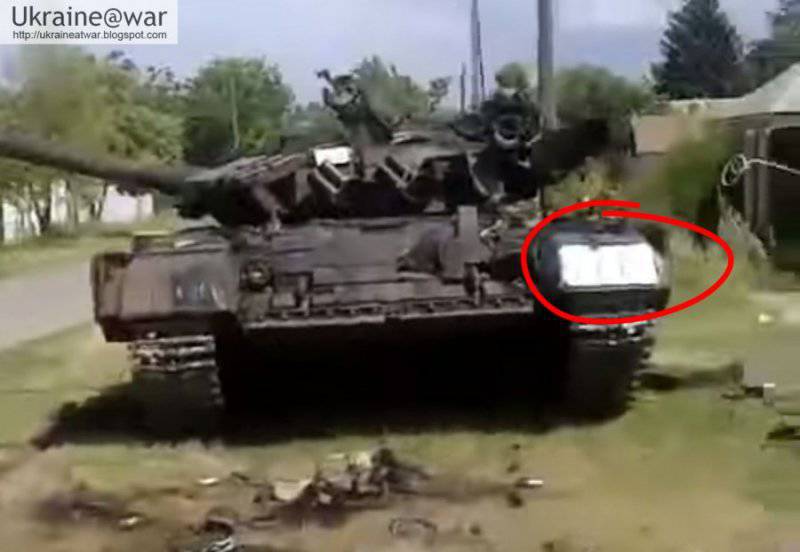 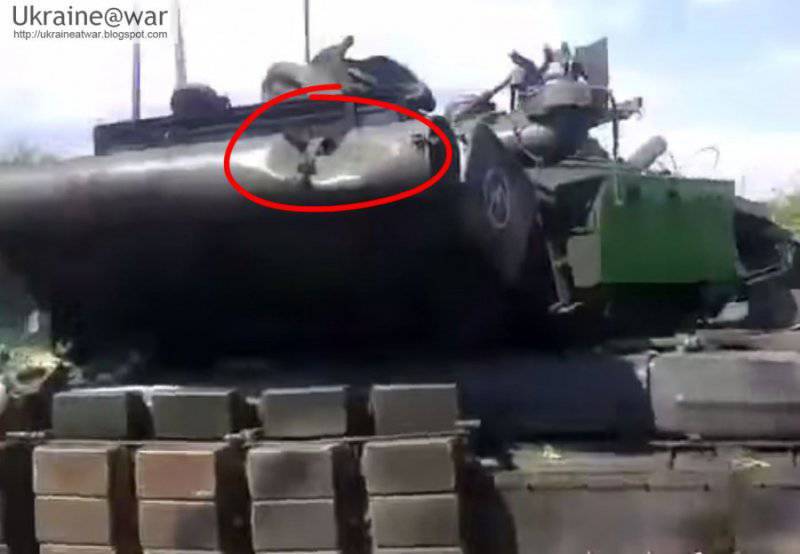 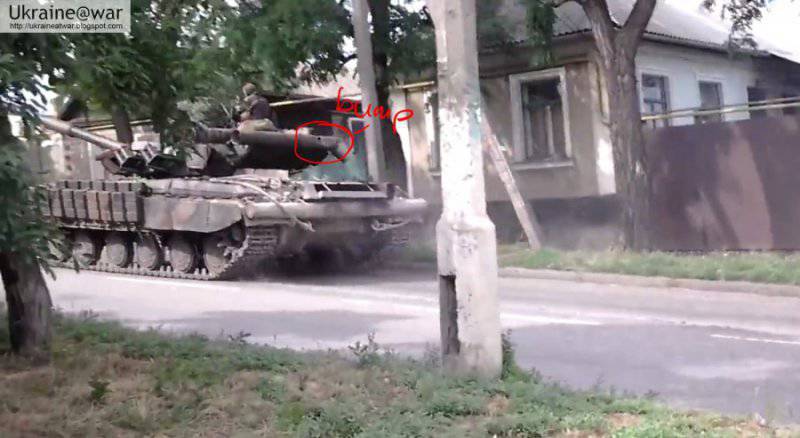 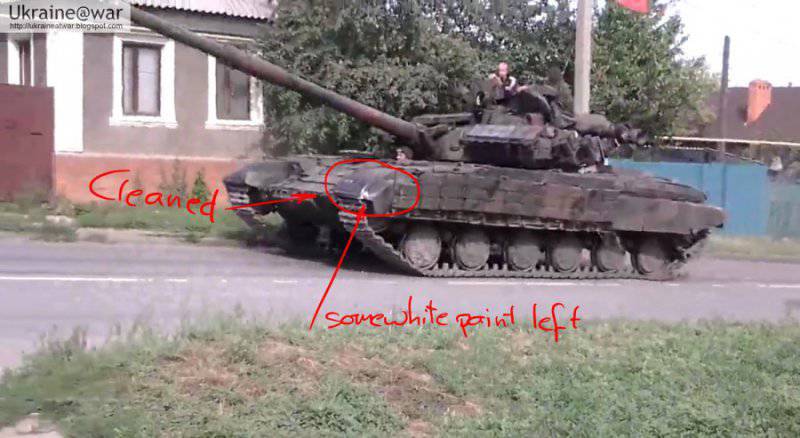 The issue of the “origin” of two tanks of the LNR militia has recently been tackled by the authors of the blog Ukraine @ War, which does not have a good attitude towards Russia or the new unrecognized republics. They tried to analyze two videos published a few days ago. On these records are depicted tanks T-64BV passing through the streets of Lugansk. Foreign bloggers identified one of these cars as a tank, lost by the Ukrainian army 17 June near the village of Metalist. In favor of this version, the authors of Ukraine @ War argue in the form of the characteristic white color of one of the front wings of the car and damage to the pipe equipment for underwater driving, located at the stern of the tower. From this it is concluded that the Lugansk militia seized the tank of the Ukrainian army and are ready to use this vehicle against its former owners.

The second armored vehicle, which became the hero of a recent video, has raised some questions from the authors of the Ukraine @ War blog. Based on the color of the two tanks, they claim that the video captured two different tanks. The origin of the second T-64BV remains in question. At the same time, foreign bloggers note that there is an identification mark on the turret of the second tank. According to the authors of the national blog BMPD, this is the emblem of the 24-th separate “Iron” mechanized brigade of the armed forces of Ukraine deployed in the Lviv region. 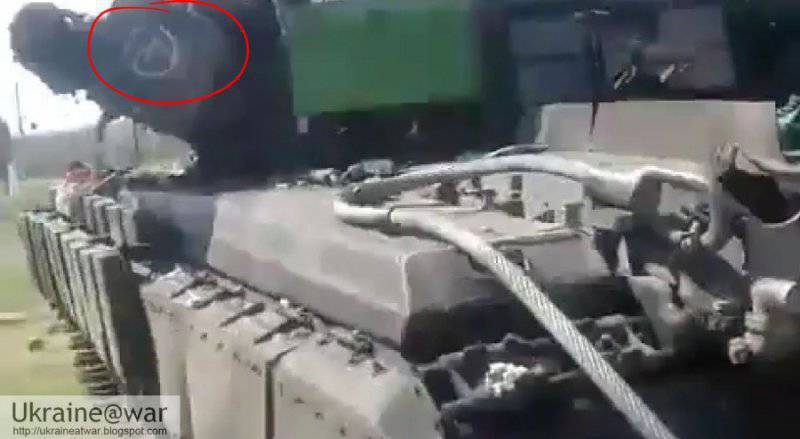 The authors of a foreign blog have not yet reached a definite conclusion about the "origin" of the second tank. They admit that this T-64BV could have been taken by the militias based on one of the battles. However, the Ukraine @ War blog does not exclude another version. According to her, a new tank could come to Lugansk as part of an alleged Russian convoy, which allegedly invaded Ukrainian territory. The identification mark of the 24-th separate brigade, in turn, could be applied to the car for the purpose of disguise and provocation. It should be recalled that the video with the alleged Russian column raises a lot of questions that do not allow to consider it a reliable source of information about the situation.

Despite the doubts of foreign bloggers, the fact remains: the army of the Lugansk People's Republic has a certain number of tanks and, apparently, if necessary, will be able to use them in battle. It is possible that the result of such a battle will be new trophies of the T-64BV model or other Ukrainian armored vehicles, suitable for restoring and continuing operation.

T-64 vehicles of several modifications, including T-64BV, are the main type of tanks in the ground forces of Ukraine. Modification of the T-64BV is the latest version of this tank, adopted for service in the Soviet Union (1985 year). The main tank T-64BV is a modernization of the armored car T-64B (1976) with some changes in the design and production technologies, as well as with the established complex of active protection. It is this system that determines the main differences between the tanks of versions “B” and “BV”, although there are also other innovations. 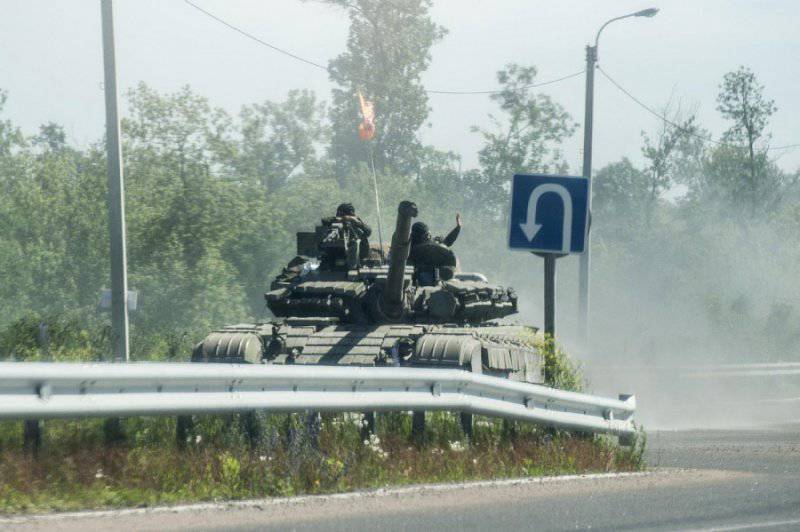 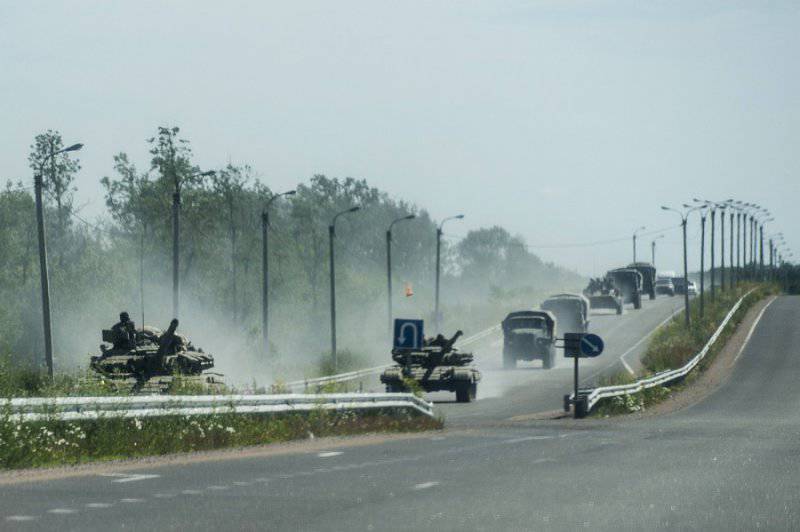 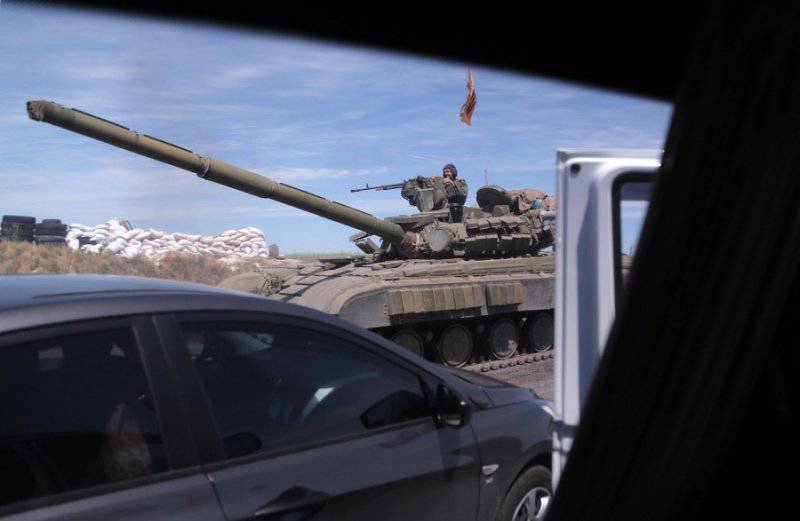 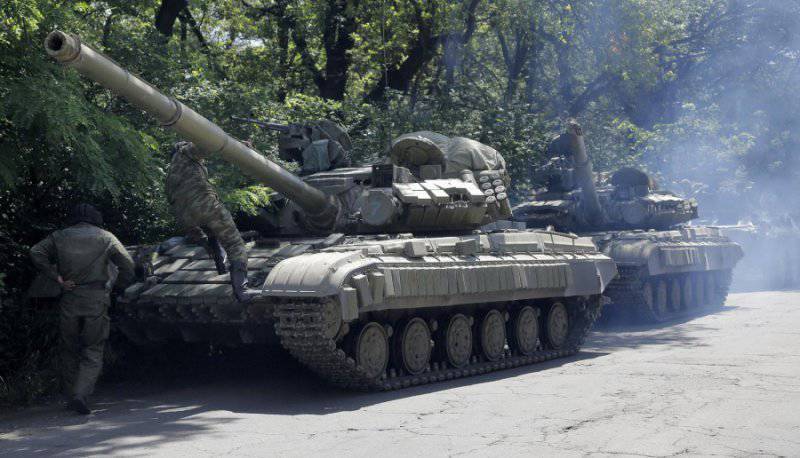 The T-64BV tank has a combat tonnage of 42,4 tons, a length with a forward cannon of 9,3 m, a maximum width of 3,54 m and a height of 2,17 m. The car is equipped with a five-cylinder 5TDF diesel engine with a power of 700 hp. Engine torque is transmitted to the rear wheel drive. As part of the chassis there are six road wheels with torsion bar on each side. The maximum speed of the tank is declared at the level of 60 km / h. On rough terrain, the T-64BV can only accelerate to 35-45 km / h.

The main weapon of the T-64BV tank is the 125-mm smooth-bore gun-launcher 2А46М-1, stabilized in two planes, coupled with an automatic loader and capable of firing 9-112-1 “Cobra” guided missiles. The conveyor automatic loader is 28 shots of various types. Another 8 shells and shells to them are in the inside of the fighting compartment. The armament of the tank is equipped with a 1А33-1 fire control system associated with sights, a laser rangefinder, a ballistic computer, a set of sensors and other equipment.

As an additional weapon, the T-64BV tanks carry one PKN caliber 7,62 mm with 1250 ammunition ammunition and an anti-aircraft rockets missile "Utes" (12,7 mm) with 300 cartridges paired with a gun. Also on the tower are 8 smoke grenade 902B "cloud."

One of the main innovations applied in the T-64BV project was a complex of dynamic protection. The T-64BV became the first production tank in its family to receive a similar system. Dynamic protection "Contact-1" is a large number of box-shaped containers with an explosive charge and two metal plates and is designed to protect the tank from cumulative ammunition. Kontakt-1 containers are mounted on the frontal part of the hull and turret, as well as on the side screens. On the T-64BV type tanks, the 265 sets up dynamic protection containers tightly covering the frontal and onboard parts of the tank.

The T-64 family of tanks, including the T-64БВ, are often referred to as obsolete, referring to their age and the fact that the Russian ground forces abandoned them a few years ago. Nevertheless, in the context of the current conflict (due to the specific state of the fleet of equipment of the Ukrainian armed forces), the “new” Luhansk T-64BV can become an effective means of fighting for the right to self-determination.