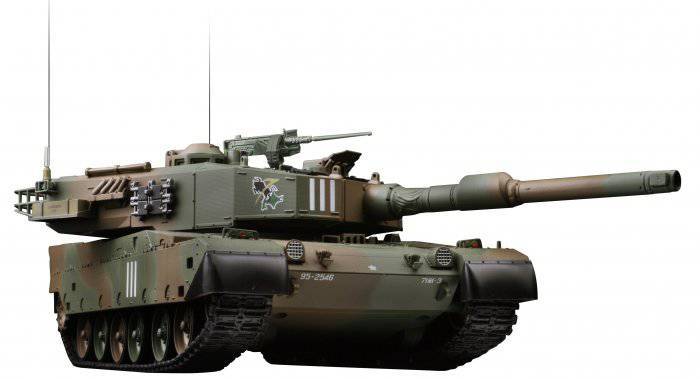 In 1976, the Mitsubishi company began work on creating a new main combat tank, which was supposed to replace the existing Type 61 and 74 vehicles. In addition to Japanese engineers, specialists from the German companies MaK and Krauss-Maffei took part in the development of the tank, who took part in the creation of the German main battle tank Leopard. The influence of German designers was reflected in the appearance of the Japanese tank. In 1989, after a series of tests and refinements, the tank was adopted by the Japanese Self-Defense Army under the index "90". The installation batch of tanks was released in 1990, since 1992, mass production has begun. As of 2010, the Japanese Self-Defense Army was armed with 341 Type 90 tanks. The initial need for Japanese armored forces in new tanks was estimated at 600 units.

According to a number of specialists, the Type 90 tank is rightfully among the best tanks of the day. This tank is also one of the most expensive, the 1 vehicle costs the Japanese government 8-9 million dollars, only Leclerc is more expensive - 10 million dollars per tank.

MBT Type 90 is designed according to the classical scheme with rear arrangement of the MTS - engine compartment. In front of the tank is the control compartment, which is shifted to the left side, on the starboard side in front is part of the gun ammunition. The fighting compartment is located in the central part of the tank. In the armored turret on both sides of the gun are the gunner and commander, gunner on the left, the commander on the right. The use of an automatic loader on the tank allowed to exclude one person from the crew. In this Japanese tank repeats Soviet cars T-64, T-72 and T-80, as well as the French Leclerc.

The tank hull and its tower have a welded structure. The armor of the tank is multi-layered, spaced out, with the extensive use of ceramic elements, which are produced by Kyoto Ceramics Company. The upper frontal hull sheet is installed at a very large angle to the vertical, while the frontal and side parts of the tank tower are almost at a right angle. The hull sides and undercarriage of the tank are equipped with additional protection in the form of steel anti-cumulative screens. The combat weight of the tank reaches 50,2 tons. 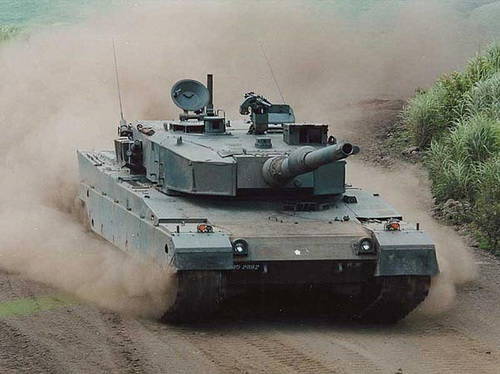 The basic one weapons The tank is a X-NUMX-mm smooth-bore cannon Rh-M-120 of the German company Rheinmetall, produced in Japan under license. The gun is stabilized in two planes. The corners of the pickup in the vertical plane are in the range from -120 to + 12 degrees. It is possible to shoot a gun with all 15 ammunition developed for the German Leopard-120 tank and the American МХNUMXА2 Abrams. Mitsubishi developed a special machine gun to load the gun using a mechanized ammo pack, placed in the turret niche and containing 1 shots. The necessary conditions for the implementation of automatic loader is the return of the gun barrel after a shot at a zero angle of elevation. After charging, the gun automatically returns to the specified angle of fire.

The striker is separated from the remaining space of the turret by an armored partition, and to reduce the destructive effect of the detonation of the ammunition in the turret's roof, special expelling panels are mounted. In addition to 20 shots, which are in the mechanized combat pack, 20 shots are also stored in the tank hull. With the exception of 120-mm smooth-bore guns, which are manufactured in Japan under the license of the German company Rheinmetall, all units and assemblies of the tank Type 90 are of Japanese origin.

Created by "Mitsubishi" fire control system (FCS) is considered one of the best in the world. The OMS includes panoramic tank observation and guidance devices stabilized in two planes, gunner observation and guidance devices stabilized in one plane, a laser range finder, an 32 bit electronic digital ballistic computer, an automatic tracking system for the target, and a sensor system, responsible for the transfer of information to the ballistic computer to calculate the corrections when shooting.

The gunner's sight is equipped with a daytime optical channel, a thermal imaging channel, and a laser rangefinder. The manufacturer of the gunner’s sight is Nikon Corporation, the commander’s sights are made by Fuji. The fire control system provides the ability to auto-follow targets based on the operation of a thermal imager. Thanks to the LMS, the tank is able to fire in motion and from a place at any time of the day, both at moving and at fixed targets. Without the use of automatic target tracking, the commander and the gunner can manually lead the targets. To use the target tracking machine, the tank commander or gunner must press the Capture button as soon as the target is detected and falls within the scope of the Capture target in the sight. In the event that the object disappears for some time, for example, behind a shelter, the sight continues to follow the target at the same speed, so that in case of a target appearing from behind the shelter, the gunner can quickly put it “on hold”. 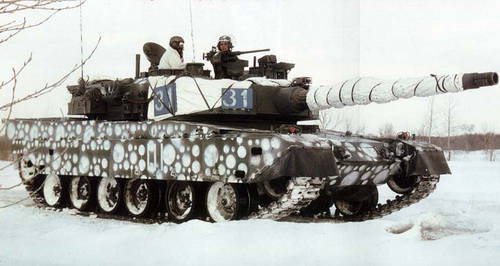 The commander's sight stabilized in the 2-x planes, which has only a day-time optical channel, allows not only to detect and hit targets directly, but also has such a function as a "tank killer". When you press a button on your control panel, the commander has the ability to "transfer" the object he finds to the gunner, while he himself may continue to search for new targets, at this time the gunner hits the first detected target.

The signal from the thermal channel of the sight of the gunner’s sight is displayed on the 2 monitor. One of them is mounted at the gunner's place, the second at the commanding workplace. The heart of the OMS is the 32-bit digital ballistic computer. With the defeat of both fixed and moving targets, he amends for distance, wind, ambient air temperature (data comes from sensors located on the tower of the tank), the bend of the gun barrel and the angle of inclination of its axle axles.

Auxiliary armament of the tank includes an 7,62-mm machine gun coupled with an X-gun and an anti-aircraft machine gun mounted on the commander's turret of the 12,7-mm. On the sides of the tower closer to the stern, installations for launching smoke grenades are mounted. In addition to smoke grenades, a smoke screen can be installed by special thermal smoke equipment, also mounted on a tank.

In the engine compartment is a V-shaped 10-cylinder diesel engine 10 ZG manufactured by Mitsubishi. The engine is equipped with a turbocharging system, has liquid cooling and at 2400 rpm is able to develop maximum power in 1500 hp In one block with the engine, a hydromechanical transmission is made with an automatic planetary gearbox, which is locked by a torque converter and a special hydrovolume transmission in the steering drive. The automatic transmission has 4 transmissions forward and 2 rear. The maximum speed of the tank on the highway reaches 70 km / h, the maximum reverse speed - 42 km / h.

The power of a ten-cylinder engine allows the tank to cross the 20 meters from the spot in 200 seconds. When traveling over rough terrain, MBT is able to overcome a ditch with a width of 2,7 m., A vertical wall with a height of 1 m., And a ford to a depth of 2 m. The cruising range of the tank equals 350 km., With fully filled tanks (1100 liters). 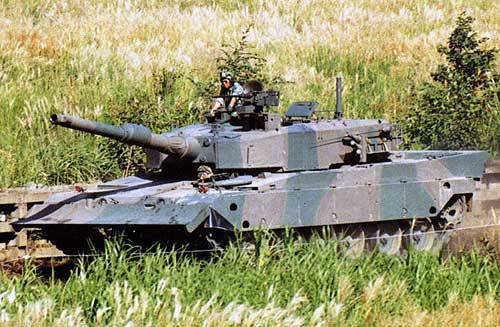 In the undercarriage of a tank from each side, there are 6 dual rubber-supported and 3 supporting rollers. Driving wheels are at the back. Combined suspension. Hydropneumatic servomotors are on the two front and two rear support rollers on each side, and torsion shafts on all others. This suspension scheme allows the tank to tilt the hull in the longitudinal plane, as well as change the amount of clearance in the range from 200 to 600 mm. Caterpillars of steel tank with rubber-metal hinge, equipped with removable rubber pads.

A laser radiation sensor is mounted on the front of the tower’s roof, which beeps and also indicates the direction of radiation to the tank commander’s workplace. This system can be used in conjunction with the automatic shooting of smoke grenades to counteract missiles with an infrared beam guidance system. In addition, the tank equipment includes a system of protection against weapons of mass destruction, a high-speed fire extinguishing system, a tank intercom and a radio station.

On the basis of the OBT Type 90, an armored repair and recovery vehicle BREM 90 was created. BREM received a new superstructure of the hull with a crane mounted on the front right, a bulldozer mounted on the front of the hull and a hydraulic winch. Also, work is underway to create an 91 Type Bridge Construction Tank, which is capable of covering obstacles up to 20 meters in width with a bridge carrying capacity of 60 tons.

We are in Yandex Zen
Once again about tanks, Soviet and German
Heavy tanks of the USSR in the postwar period
15 comments
Information
Dear reader, to leave comments on the publication, you must to register.