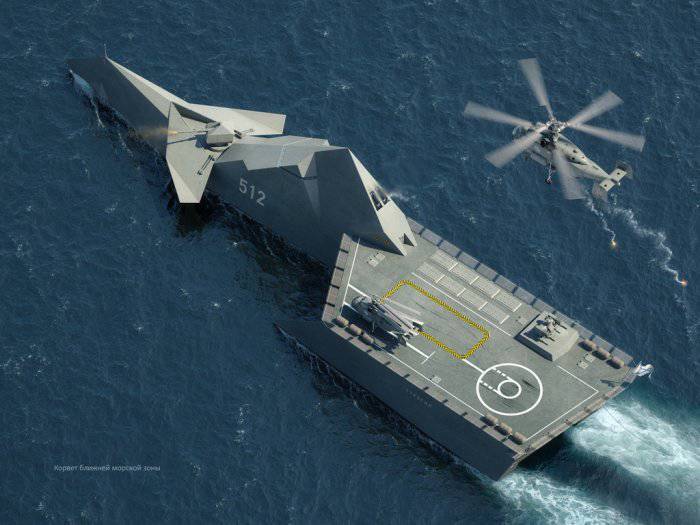 Domestic shipbuilding is in decline. Such statements are annoying to hear, although they are fair. Russia is positioning itself as a developed power in the energy, economy, industry and other sectors. However, it seems that these are only words - in reality, the country is still a raw materials appendage.
In accordance with a presidential decree, the United Shipbuilding Corporation (USC) was established in 2007. As stated on the official website, the main goal of its activities is the centralization of a significant part of the Russian shipbuilding complex and coordination of its activities to ensure the demand of both domestic and foreign customers.

Why is the construction of ships and vessels in the West and in the countries of Southeast Asia a profitable business, while in Russia it is unprofitable? Why Russia for 20 years could not go to market relations and occupy a decent niche in the global shipbuilding? For example, Vietnam in 2002 produced only 0,01% of the volume of world shipbuilding, and by 2007 it reached the level of 2,19%, surpassing the current volume of Russian civilian shipbuilding more than 20 times. About this level of world shipbuilding, USC planned to achieve in the uncertain future.

Today, Russian ships are often built on foreign projects for foreign customers. Moreover, sometimes only the body is created, and the mechanisms, electronic stuffing on them are placed abroad. Domestic shipowners still prefer to make orders abroad, where they get quality ships faster and cheaper.

The process of the formation of USC was delayed, progress in shipbuilding has not been seen. Over the past six months, three interesting ones can be traced in USC activities. stories.

The first is an industrial design competition in shipbuilding. The requirements of this competition, organized by the USC, in the main nomination "External futuristic appearance of the corvette" are constantly softened. As a result, it was necessary to provide a sketch of the appearance of the corvette of the XXI century. Published projects raise many questions, as huge funds are needed for their implementation. Requirements for operation, load, stability, general location, compatibility of weapons and devices, as well as many other things, which are taught, for example, in St. Petersburg Dzerzhinka or Korabelka, were not taken into account. Some projects were partially “lapped” from foreign prototypes.

Shipbuilders are ready for innovations, but there are requirements that cannot be violated. Of course, there are cases when it is non-professionals who made the greatest inventions and discoveries. But let's not forget that the design of a modern ship implies a compromise between a multitude of conflicting requirements. On the one hand, the aggressive marine environment tends to turn, sink, crush the ship at the slightest miscalculation of the shipbuilder or the crew’s mistake. On the other hand, a modern ship must be equipped with various technical systems. weapons, means of energy, communications, observation, detection, protection ... To solve these problems, we need specialists, and most of the participants in the competition were amateurs in shipbuilding. However, the winners are named, and there are no professionals among them.

The second story is related to Finnish investments and orders. At the end of last year, a tripartite agreement was signed in the Kremlin between Sovkomflot, USK and STX Finland on the construction of two multifunctional icebreaking supply vessels in Finland. At the same time, not long ago, the St. Petersburg shipyard "Severnaya Verf" (SV) and the Baltic Shipyard (BZ) built supply vessels and turnkey diesel-electric icebreakers - which means they are able to fulfill the order of STX Finland. 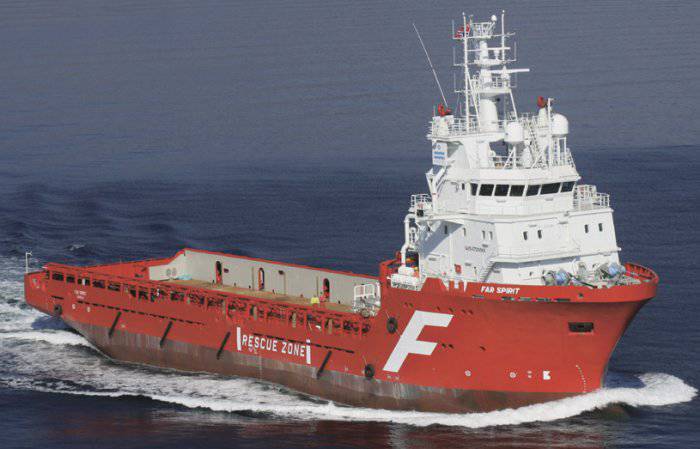 Why did the order for $ 200 million go to another country? Most likely, the matter is not only that two whales of the domestic shipbuilding (NE and KB) are not included in the structure of USC ...
One of the areas prescribed in the Marine Doctrine of Russia is the development of offshore resources. For this, in addition to auxiliary vessels, drilling platforms, tankers and gas carriers of ice navigation, atomic icebreakers will be needed. Already in this decade in the Russian nuclear navyperhaps there will be only one atomic icebreaker - “50 years of Victory”. The rest will be cut into metal. 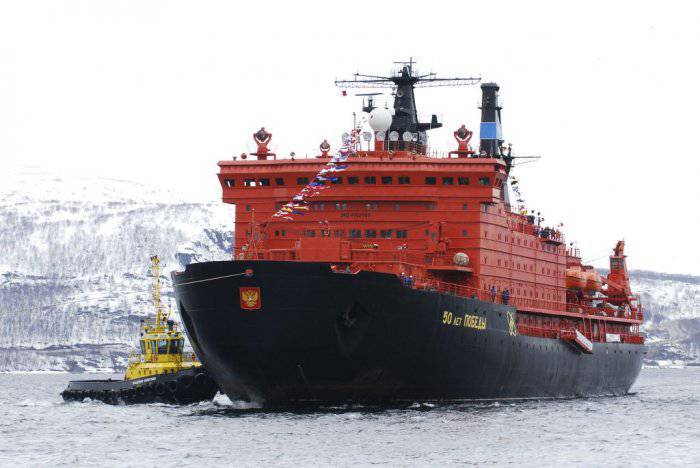 Recently, in shipbuilding circles, the issue of building an atomic icebreaker in Russia, which can be put into mass production, has been actively discussed. At the same time, the possibility of building a series of nuclear-powered icebreakers in Finland and Germany is being considered - this, in particular, is evidenced by the fact that USC has already bought part of the assets of the Finnish shipyards.

The first Soviet atomic icebreaker "Lenin", which was also the very first in the world, was built in Leningrad at the "Admiralty Shipyards", and the next eight - almost everything on the BR. Why does the USC again try to find a solution not “here”, but “there”? It is important to note that the head of Rosatom, Sergey Kiriyenko, being at the St. Petersburg BR, stated that, apparently, nuclear-powered icebreakers should be built precisely at this plant.
The third story is the creation of the Russian-French consortium USC-DCNS and the supply of Mistral helicopter carriers for the Russian Navy.

The topic of the purchase by Russia of the Mistral in France has been discussed for a very long time in the media and on the sidelines of shipbuilding enterprises. According to experts, there are no uniqueness and innovation in this project, and initially, probably, few people believed in its implementation. However, in the end a competition was organized, it was necessary to implement the helicopter carriers. USC and French DCNS, ready to build them, united in a consortium - no one was surprised that it was he who won the tender.

As a result, Russia will receive from France only two corps of helicopter carriers with power plants and propellers. The price of each of the "Mistral" will be approximately 600-800 million euros - without weapons and equipment. It is gratifying to note that 27 of May this year, after the end of the G8 summit in Deauville, the Russian president announced that two such ships would be built in Russia. At the same time, the equipment of these ships with Russian equipment (helicopters and boats) will lead to the fact that the use of space and volumes will be ineffective - after all, the project was developed for standards and standard sizes of French equipment. The question of the subsequent purchase of helicopters and boats from France is brewing ... It is also worth thinking about the fact that these helicopter carriers are not designed for operation in the Russian winter, which means that they will have to be used only in the corresponding latitudes.

From an operational point of view, ships that sharply contrast in their design characteristics, standards, and even appearance will be something of a “white raven” with questionable combat value.

Now the Ministry of Defense is hardly financing the construction of the necessary military equipment, even corvettes.

Against this background, the proposed purchase of helicopter carriers, which will be made at the expense of the taxpayers, looks very unattractive.

The USSR designed and built large surface ships, including classic helicopter carriers. Nevsky PKB and Northern PKB are ready to design ships like the Mistral, but adapted to the operating conditions in Russia. Underloaded plants are in St. Petersburg, Severodvinsk and the Far East. And since Russia can design and build cruisers, nuclear-powered icebreakers and helicopter carriers, then why buy them abroad?

Judging by the materials of the official website of the USC, the corporation reasonably expresses uncertainty in achieving the "desired economic effect from the consolidation of assets." I am glad that the USC is concerned about its own future, although it would be better if its leaders took care of the development of the shipbuilding industry in Russia, as well as the well-being of workers and engineers of domestic shipyards.

By the way, in March of this year, the Admiralty Shipyards OJSC (part of the USC) launched the Akademik Treshnikov ice-class research and expeditionary ship. This is the first ship of this type being built in Russia.
"Admiralty Shipyards" have always been among the first in the development of new technologies and the construction of complex ships and vessels. However, the fate of the oldest shipbuilding enterprise in Russia, founded by Peter the Great, was decided during last year’s St. Petersburg International Economic Forum. The governor of St. Petersburg and local authorities are actively supporting the transfer of the main plant facilities to Kotlin Island and the construction of a new shipyard there. Actually transfer means liquidation.

The removal of capacity will be made under the pretext of building the Novo-Admiralteisky bridge between the island of the same name and Vasilievsky. However, it is obvious that the territory in the city center occupied by the Admiralty Shipyards is attractive to investors - for example, for the purpose of building luxury housing (as stated in official sources, the liberated territories will be used for the construction of residential, commercial and social facilities.).

USC promises to build a new modern shipyard on Kotlin Island by 2017. The alternative proposal of the ex-general director of the shipyards, Honorary Citizen of St. Petersburg Vladimir Alexandrov to build a tunnel instead of a bridge did not cause the proper reaction.

Why did they not implement the construction of a super-ship in Primorsk? Because the order book was not formed. But there will be no “serious” orders until a modern plant appears, which, in turn, must be built for a portfolio of orders. It turns out a vicious circle. There are fears that the main part of the Admiralty Shipyards will be demolished by 2017, and the construction of the new plant will be slowed down due to the lack of an order book. Maybe OSK sees a way out of this vicious circle?

We are in Yandex Zen
Russian Arms Expo-2013: exhibits and statements
New USC President and His Future Plans
4 comments
Information
Dear reader, to leave comments on the publication, you must to register.