8 2011 June
4
The head office of the Merkava program, which is under the jurisdiction of the Israeli Ministry of Defense, and the IDF ammunition corps, understands perfectly well that their tank has reached the ceiling of the maximum allowable weight, and an improvement in its security cannot be achieved by increasing reactive or passive protection. And today it is extremely necessary to meet the changing threats, which is especially important in asymmetric conflicts, where a striking blow can be made from any direction. With this in mind, it is not surprising that Israel has been conducting research in the field of active protection systems for more than two decades. 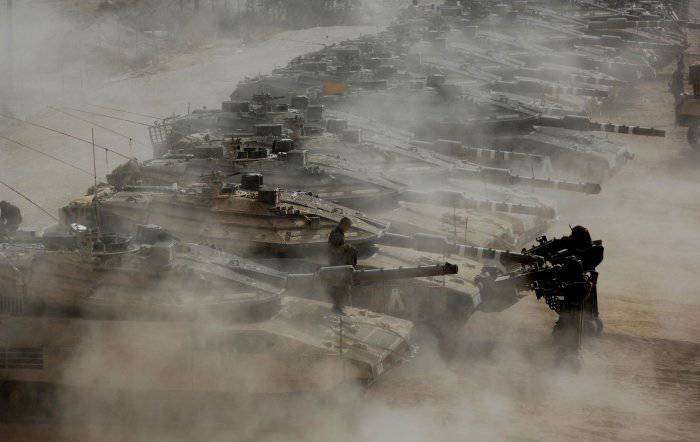 Huge investments in these developments are already paying off today. In 2010, Israel was the first to adopt the active defense system created by Rafael - Trophy by its armored vehicles, and it has already established itself from the positive side in combat. IMI’s more versatile protection complex, Iron Fist, already this year, during fire tests in Israel and abroad, demonstrated impressive possibilities for intercepting and destroying kinetic armor-piercing shells and anti-tank missiles.

The so-called "Modular reservation system" was first applied in tank Merkava Mk 3 and then was effectively improved in Mk-4, its main distinguishing feature is the design of various elements of the armor, depending on the type of threat. In contrast to the previously installed additional protection on existing armor, which significantly increased the weight of the machine, advanced elements replace the installed armor modules, therefore they allow for a minimum increase in weight. A similar concept was developed for the heavy Namer heavy infantry fighting vehicle, based on the Merkava tank. The Trophy system was integrated into the existing Merkava defense without unnecessarily changing the tank's silhouette. Providing protection for the entire upper hemisphere, complex systems are located in two modules located on both sides of the turret. The basic version of the Trophy, designed for installation on Merkava tanks, weighs about 771 kg and has a built-in automatic reloading system. Trophy ASPRO-AL is a lightweight version that can be equipped with various armored vehicles weighing 15-30 tons, also has a built-in automatic reloading system, a slightly smaller launcher and weighs 454 kilograms. Trophy ASPRO-A-UL is an ultra-light version designed for light vehicles, weighs only 270 kg, has only a few "anti-shells" and does not have a built-in automatic reloading system.

Although SAZ (active defense system) significantly increases tank protection, especially with regard to tandem anti-tank missiles and missiles that are used today, it also provides additional benefits from combat control and situational awareness. First time in stories The ground systems of the base systems are equipped with built-in sensors, which significantly increases the crew’s ability to detect and locate threats early, while at the same time they have been used successfully for more than 50 years in fighters and combat vessels.

Israeli tanks now have all these capabilities - crew members effectively eliminate Palestinian ambushes and traps along the border sector of Gaza, while the Trophy detects, localizes and eliminates immediate threats and transmits information to the crew, while the tank commander takes action against firing at targets automatically determined by the sensors of the system.

As a supplement to the two main hard kill systems, such as Rafael ASPRO-A Troph and IMI Iron Fist, soft kill methods are being introduced, which implies optical-electronic countermeasures — for example, the ESP complex developed by Elbit Land Systems consists of a set of integrated infrared panoramic sensors, laser radiation detection and warning systems, and installation of directional infrared interference mounted on a single mast. The complex provides the crew of the armored vehicle with full information about the tactical situation, warns of a missile attack, and effectively counteracts all sorts of missile threats when the hatches are closed.

IMI also has an integrated laser intervention in its Iron Fist solution. The system successfully intercepted two medium-range anti-tank missiles with the NA-7 Metis during tests conducted in the United States. Iron Fist also performed well in eliminating threats of other types, for example, he successfully defended a tank from three kinetic projectiles. In general, the system of seven shells sent seven destroyed, which is one hundred percent indicator of the degree of protection.

Interception is carried out with the help of an explosion, through the brain of the active protection system - the sensor and the associated processor. The most commonly used is the 2133 WindGuard EL / M system from Elta Systems, the successful use of the AESA radar is proven in the combat system used by Israel in Merkava Mk4M tanks. Part of the active protection system Trophy, WindGuard is designed to destroy anti-tank missiles and shells. The radar detects a rocket or projectile launched from a helicopter, instantly calculates the predicted meeting points and the point from which the battle charge was launched. If this threat can affect the protection of the fuel tank, WindGuard will instantly use Troph to eliminate the threat at a safe distance. Within a few seconds, the radar sensors also inform the crew of the location of the source of the impact, automatically sending the main weapon or remotely controlled combat module, which strikes back at the source of the threat. The EL / M 2133 installed on Merkava is the first generation of the system. Modern, compact, lighter, and affordable models are currently under development.

Meanwhile, even 20 years ago in Russia, the first in the world integrated system of active protection of armored vehicles "Arena", which was designed in the Kolomna machine-building design bureau, was fully tested and prepared for serial production. At the same time, this system was not established on the Russian MBT during military conflicts in the North Caucasus.

According to Russian experts, the Israeli Troph system in all its technical characteristics is significantly inferior to the domestic "Arena". In Russia, many people believe that the hype raised around the Troph complex is primarily due to the fact that it is practically the world's first mass-produced active protection system for armored vehicles adopted for service. At the same time, Russian experts claim that, of course, the installation of active protection on armored vehicles greatly increases its survivability on the battlefield. However, Troph, like any other similar system, can be overcome.

We are in Yandex Zen
The best protection. Overview of recent advances in active protection systems
Modernization trends of the tank Merkava Mk-4 (Israel)
4 comments
Information
Dear reader, to leave comments on the publication, you must to register.