4 2014 June
10
The Martin JRM Mars (read by Martin Mars) is a flying four-engine boat that was developed from 1938 to 1943 for the US Navy. The boat was created as a “flying dreadnought” - a long-range patrol aircraft for use in the ocean. A total of 1945 to 1947 year was released 5 serial flying boats of this type. All aircraft were put into service with the US Navy. As of September 2012, one of this type of seaplane continued to serve as a firefighting aircraft. It is worth noting that the Martin Mars was the largest seaplane in stories, which was produced in series, even if it was released all 5 machines. The hydroplane Hughes H-4 Hercules, which surpassed it in size, was assembled in a single copy.


This aircraft is still the largest flying boat ever to be in service with the US Navy. The car demonstrated its capabilities to the military as early as 1944, when the aircraft was able to deliver 9299 kg of payload to Hawaii, covering the distance in 7564 km in 27 hours 36 minutes. After completing this flight, the US Navy immediately issued an order for the 20 serial flying Martin Mars boats, which received the designation JRM-1 and were to be used as transport aircraft.

However, the end of the Second World War made significant adjustments to the release plans, the order was reduced to 5 aircraft in the JRM-1 version and one JRM-2 aircraft with increased flight weight. According to the standard of this aircraft, it was later possible to modify all 5 aircraft that received the new designation JRM-3. JRM-3 airplanes were equipped with Wright R-3350-8 motors in 2300 horsepower. each, and the wingspan of the aircraft reached 60,96 m. About how large the Mars flying boats were, it gives an idea of ​​the fact that the aircraft once managed to carry an 301 passenger and 7 crew members in one flight. 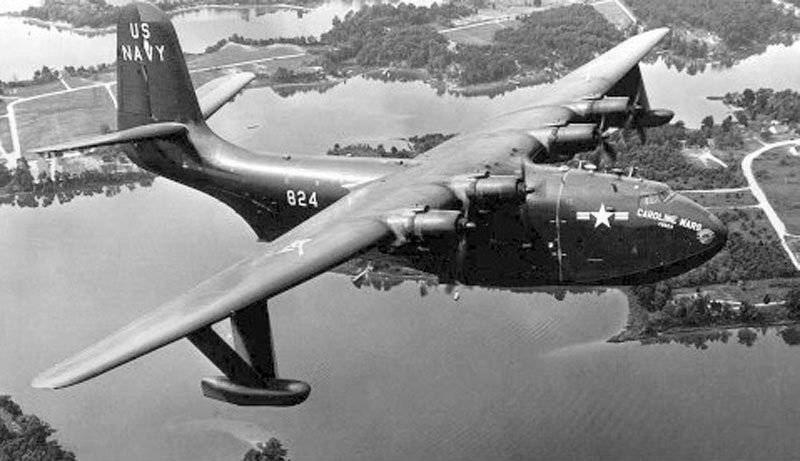 The American company Martin received the 23 August 1938 of the year contract for the creation of a new flying boat. In total, it was planned to produce an 1 prototype aircraft, which the military were going to use as a patrol bomber. Soon the plane got its own name - Mars. For its time, the car was outstanding. With a total flight weight of more than 65 tons, the seaplane was supposed to develop a cruising speed of 365 km / h and fly to a range of up to 8 thousand km. At the same time, it was planned to equip the flying boat with four newest Wright R-3350 Duplex Cyclone radial engines, developing power in the 2000 hp. The construction of the prototype aircraft began in August 1940 of the year, and already 27 of September 1941 of the year the car was rolled out of the assembly shop.

The prototype, which received the XPB2M-1 index, first flew into the air on July 3 of the year 1942. This could have happened before, but at the moment when the plane was ready, Martin decided to replace the 2000-powerful Duplex Cyclone engines with more powerful and sophisticated R-3380-18 engines that could develop power in 2200 l. with. In addition, the Hamilton Standard three-bladed wooden screws were replaced, which were replaced with more modern metal construction. All these operations delayed the first flight of Mars almost 6 months.

During the flight tests of the aircraft was not mounted military equipment. Although at the design stage, the designers planned to install on board a flying boat three rifle positions (turrets) that were planned to be equipped with 6x12,7-mm machine guns. The first machine gun turret was planned to be installed in the nose of the aircraft, the second in the upper part of the fuselage behind the wing, and the third in the rear part of the fuselage. However, by the time the flight test program was completed, the American fleet was already armed with the Consoldated-Vultee PB2Y Conorado - a four-engined patrol bomber. Despite the fact that the seaplane was significantly inferior in size and weight to Mars, the Navy did not need an additional number of long-range patrol bombers. 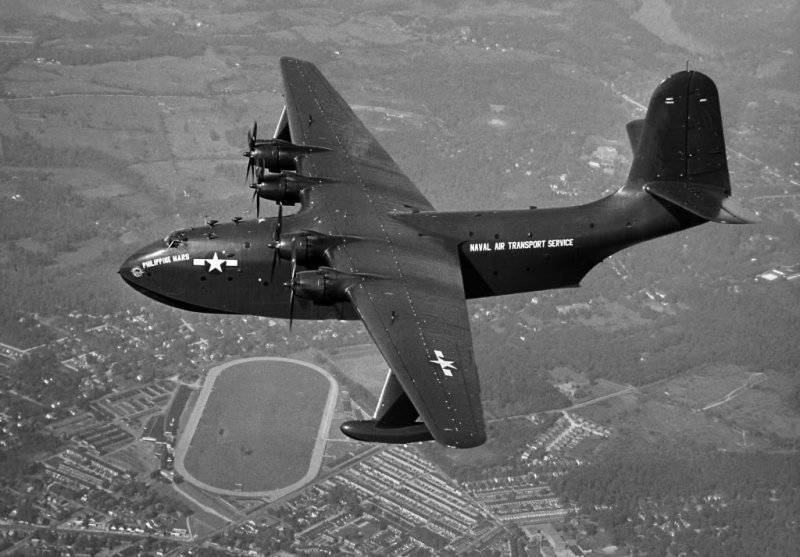 As a consequence, the designation of the Martin Mars flying boat was revised. From the patrol bomber she was reclassified into a transport seaplane. In this regard, the company Martin received an order to remove from the boat all military equipment, including defensive (machine-gun turrets). Also, designers had to redo the fuselage of the car for the convenience of transporting soldiers and military equipment. As a result, the new version of the seaplane received the designation XPB2M-1R.

The most noticeable external change in the aircraft was the appearance of a new rounded nose. The rebuilt seaplane was ready for flight on November 27, 1943. The machine was included in the newly formed air transport squadron VR-8, which was located on aviation US Navy Patuxent River. It was on this basis that future crew members underwent a training course. Subsequently, the XPB2M-1R aircraft made regular flights between Patuxent River bases and the Bermuda Navy air base. At the same time, Martin Mars began his career as a transport aircraft with an impressive flight length. The plane made a non-stop flight from Patuxent River base to Natal in Brazil. The total length of the route was 7 thousand km, and its duration was almost 28,5 hours.

In January, 1944 was transferred to the VR-2 squadron of the Pacific Naval Air Transport Service, which was stationed at Alameda Naval Base in California. As part of this squadron aircraft XPB2M-1R made 78 flights on the route San Francisco-Honolulu Bay (Hawaii). The aircraft in this version could carry up to 150 passengers. While in the VR-2, the flying boat managed to transport more than 1360,8 tons of various military goods. In addition, the aircraft delivered 120 cargoes of highly essential blood on the island to Iwo Jima. In March, the seaplane 1945 was written off, the flying boat was stored for some time on the coast at the Alameda base, and in 1949, it was cut into scrap metal. 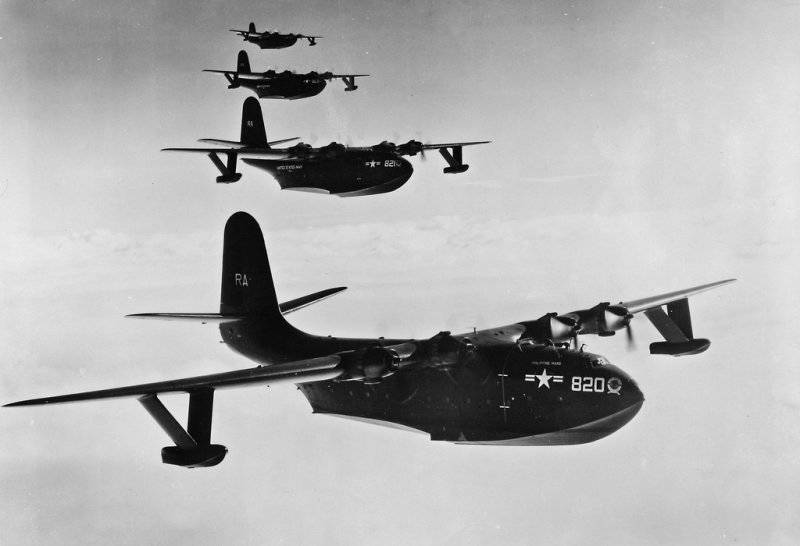 It is worth noting that the US Navy was very impressed with the characteristics XPB2M-1R demonstrated. This forced them to order the company Martin immediately 20 serial machines, which were assigned an index JRM-1. At the same time, the serial flying boats differed from the prototype in a large single keel, while on the XPM2M-1 the plumage was two-fin. The changes also suggested the installation of more powerful R-3350-8 motors on the 2400 horsepower, which rotated the new four-blade screws. The rear of the fuselage redan was also expanded. This was done to improve the controllability of the flying boat in the water.

The end of World War II led to the adjustment of the order by the Navy. A total of 6 aircraft were produced, but the first of them was lost already in August 1945. Despite the small size of the series, even in it the aircraft differed from each other. So, the last seaplane differed from the JRM-1 version by installing more powerful engines, it received four Pratt & Whitney R4360-4T Wasp Major engines with a capacity of 3 hp each. each. The vehicle received the designation JRM-000. Such an aircraft, due to the increased power of the engines, had an increased flight weight of 2 kg.

Another boat was lost near Honolulu 5 May 1950. Immediately after takeoff, the aircraft caught fire at the engine. The car was able to land safely, the crew left the seaplane after the fire spread from the engine to the wing fuel tanks. The remaining 4 aircraft carried their service as part of the aviation squadron VR-2, which was engaged in the transport of goods and people. The main routes of these aircraft were in the Pacific. One day, Mars even transported a very significant number of passengers at that time - 301 people + 7 crew members. It was a record for the transportation of passengers, it was set 19 May 1949 of the year. As part of this flight, the plane made a flight from the Navy Alameda airbase to the Navy air base North Island. 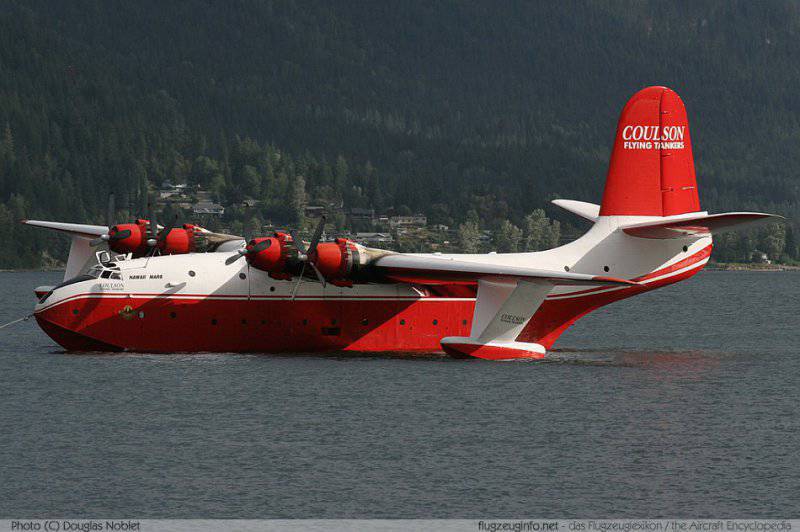 Flying boats were actively used by American naval aviation right up to 1956, when their service came to an end. At this point, the total flight time of the aircraft reached 87 thousands of flight hours. All seaplanes were sent to the American base of Alameda, where they were dragged ashore. Until 1959, the aircraft stood here, waiting for a break. However, the aircraft was not sent for scrapping.

In 1959, all 4 aircraft, as well as a large number of spare parts for them, were sold to Canada by Forest Industries Flying Tankers (FIFT), which converted seaplanes into a firefighting version. With the help of retractable scoops installed on the aircraft, intended for seawater intake, the machine could take 22 tons of water in just 30 seconds. The redesign of the flying boats was completed in the 1960 year, after which a group of pilots began the process of learning to extinguish fires from the air. All 4 aircraft purchased in the United States are located on the Sprout Lake, located in the center of Vancouver Island.

Soon one of the boats crashed in an accident, and the other was destroyed by a typhoon. The two remaining aircraft were used long enough to extinguish fires. In 2007, Coulson Forest Products bought them, which continued their use as firefighting seaplanes. One of the two flying boats was decommissioned in 2012. After that, the plane was sent to the National Museum of Maritime Aviation, which is located in Florida at the Pensacola Navy Base. The last remaining plane was flying to extinguish fires back in 2013, while last summer the British Columbia government decided to abandon the contract with Coulson because of price increases. The last boat of the series was located in the premises of Coulson Forest Products. 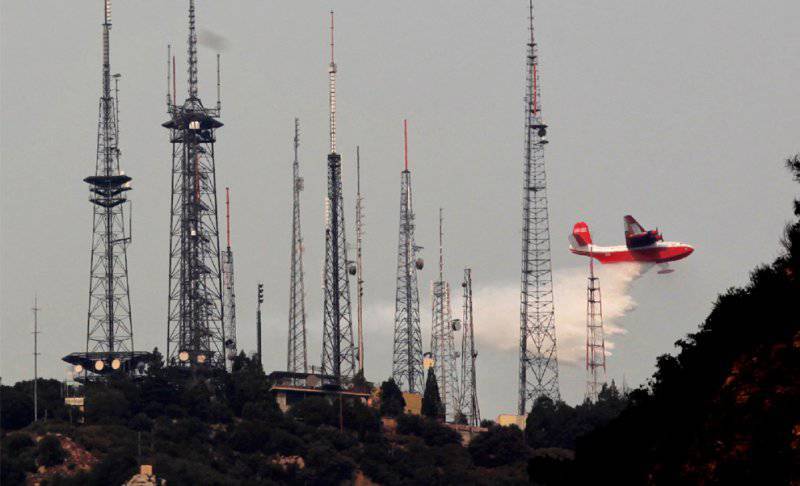 It is worth noting that at the moment Martin Mars, which has a wing span of the 61 meter (the figure exceeds that for the Boeing 747-300) and four engines, is the largest active flying boat in the world.