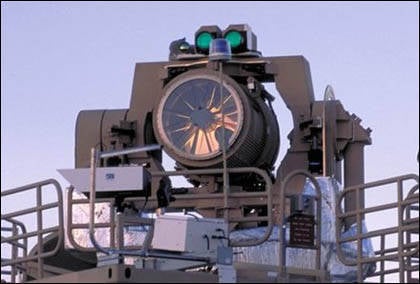 The US Navy has long wanted to get a laser cannon that could burn enemy boats and aircraft, but on the way to adoption naval a combat laser is a serious obstacle - sea air.


For effective impact on the target requires a well-focused laser beam. This is easy to achieve in the laboratory or in a landfill, but in the open sea the air is filled with water vapor, particles of debris and salt. This aerosol effectively dissipates the laser energy, as a result of which the defocused beam delivers much less energy to the target. Traditional methods of compensating atmospheric distortions (for example, the so-called guide star technology used in astronomy), which allow us to estimate the degree of air pollution and correct radiation parameters, do not help to solve this problem either. The obvious way to “burn” an aerosol hanging above sea water also does not work: modern technologies do not allow creating a combat laser of sufficient power that could fit on a medium-sized combat ship without damage to the ship’s firepower.

However, naval sailors, impressed by the recent testing of a low-power 15-kW laser that could damage a small boat, hope to be able to solve this problem with private business.

The new tender of the US Navy called "reducing the influence of atmospheric aerosols on the propagation of high-energy laser radiation" suggests the use of "optical (electromagnetic) technologies" that should reduce the resistance of sea air to a laser beam.

It would seem that the ideal conditions for the use of a naval combat laser (lack of terrain, powerful propulsion system of the ship) are complicated by one factor - sea air saturated with water vapor and salt.

One of the solutions to the problem of the military is to create a continuous stream of laser radiation, which gradually clears the energy-absorbing sea air and will eventually destroy the target. The second option is to create a super-power laser that can operate in the mode of ultrashort pulses and literally “burn through” the channels in polluted air.

In fact, both options involve the creation of a technology for laser air purification, which should reduce the density of the aerosol in the path of the high-energy beam of a combat laser. The technology can be an additional laser emitter or a module that changes the wavelength of the combat laser for the most effective neutralization of the aerosol.

If the military manages to create such a device, it will surely find wide application in other areas where it is necessary to conduct remote measurement of air pollution and its purification.

Currently, the US military is working on a radical solution to the problem of the effect of polluted air on a laser beam - they create a combat free electron laser (FEL).

FEL, in contrast to all other types of lasers, can generate a beam at several wavelengths, which makes it possible to choose beam parameters that will bring the maximum energy in these atmospheric conditions. However, FEL has been in development for 15 for years and is unlikely to go into service for another 10-15 years. At the same time, solid-state lasers with a power of 100 and more kilowatts are already quite ready today to launch marine service, all that is needed is to solve the problem of aerosols.

We are in Yandex Zen
Star Wars Ideas
Program Terra-3 - complex 5Н76
3 comments
Information
Dear reader, to leave comments on the publication, you must to register.