6 2011 June
14
1 June in one of the American military magazines listed four significant shortcomings of the Chinese aircraft carrier Shi Lang, which is an unfinished version of the Soviet aircraft carrier Varyag, purchased in Ukraine. 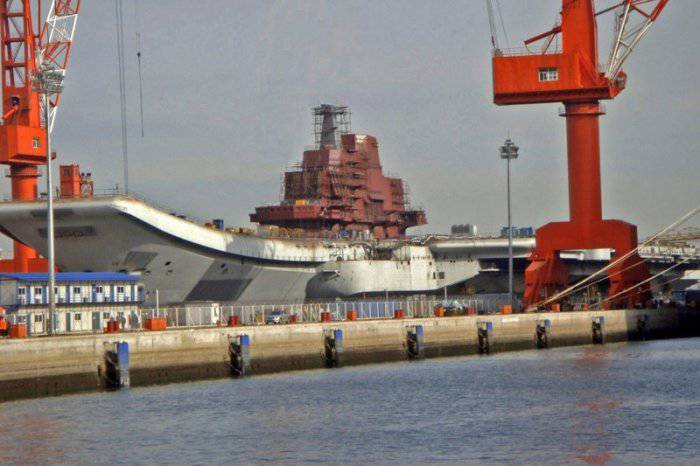 First, this aircraft carrier will operate in the Pacific, where more than 10 aircraft carriers and aircraft carriers of the United States and its allies are already concentrated. Secondly, the Chinese carrier-based fighter, which is a copy of the Russian Su-33, is significantly inferior in its combat characteristics to the American F / A-18E / F fighters; besides, the aircraft carrier does not have DRLO, EW and transport vehicles, and this gap with time will only increase. Thirdly, the Chinese ship has an extremely low-power self-defense system, does not have sufficiently effective escort forces in the form of modern surface ships and submarines. Fourth, China was unable to solve the problem of creating a reliable power plant of the ship, which is the “biggest weakness” of its first aircraft carrier. The commander of the US Pacific Command, Admiral Robert Willard (Robert Willard) at a hearing in the Senate in April of this year said that he "was not disturbed by the military capabilities of the Chinese aircraft carrier."

This aircraft carrier can only be a training platform for personnel training, and this can last for years and even decades before the first truly combat-ready national aircraft carriers emerge. Even if Shi Lang is used in hostilities, its combat capabilities will be minimal. However, it can patrol the controversial offshore areas, and in this respect the aircraft carrier will significantly increase the range of the PLA Navy.

There have been rumors that China is developing the US-based E-2 class DRLO plane, but Shi Lang does not have a steam catapult that is necessary for the take-off of such aircraft. China is also developing the Z-8 DRLO helicopter, but its capabilities are no match for the E-2 characteristics. In the next decade, the gap will only increase, as the US Navy will begin to deploy deck UAVs for various purposes.

Currently, for the escort of a Chinese aircraft carrier, only two destroyers Type 052C can be used, equipped with some kind of AEGIS system. These ships carry half the size of missiles, and their radar capabilities do not allow tracking dozens of targets, which can be done by American ships equipped with the AEGIS system.

The situation with the submarines of the military guard is even worse. The PLA Navy has two 093 Type submarines, but does not have a modern underwater communications system. The radio communication systems created in China do not have a sufficient level of perfection. Thus, the Chinese aircraft carrier cannot rely on effective cover from the side of submarines.

American media report that the creation of modern jet engines for combat aircraft and gas turbine power plants for ships are the most difficult in technical and technological terms. The Pentagon is faced with similar problems when developing an engine for the F-35B stealth fighter with a shortened take-off and vertical landing, and the power unit of the San Antonio-class amphibious assault helicopters.

Problems with engines delayed the development of the combat helicopter WZ-10 for almost 10 years, the promising fighter of the new generation J-20 is equipped with two types of turbofans - the Russian AL-31F and the Chinese WS-10A.

It is reported that China has acquired a propulsion system for its "Varyag" in Ukraine. This power plant cannot be reliable, as evidenced by the fact that the Russian aircraft carrier Admiral Kuznetsov, equipped with Ukrainian turbines, is mostly idle on its base due to frequent breakdowns. If the ship goes out to sea, the tug is relentlessly following it in order to tow it back to the port in case of another breakdown. With the Chinese "Varyag" is also very likely this situation.

Researcher at the National University of Zhengzhi (Taiwan) Arthur S. Ding (Arthur S. Ding) says that "China, with its growing interests in the sea, will have to wait for the creation of more powerful and reliable aircraft carriers."

We are in Yandex Zen
16-I Red Banner Squadron of submarines
Guards missile cruiser "Varyag"
14 comments
Information
Dear reader, to leave comments on the publication, you must to register.