2 2011 June
12
The reason for writing this material was a video on YouTube, which is not just shocking, but shocking. Posted video for a long time and for some military forums discussed. However, in the context of today, this video is very indicative. The essence of the video is simple. A certain aunt in a white robe is screaming a platoon of cadets. Cadets apparently from the first course. In short, very short breaks between a continuous mat, the aunt heard human speech. Then it turns out that the aunt was not at all an aunt, but the head of the dining room of the Serpukhov Military Institute of the Strategic Missile Forces. Everyone calls her “Aunt Tanya”. And she just instructs outfit around the dining room. But how masterfully she does it! Moreover, graduates of this institute stand up for it. But thoughts about what he saw are gloomy. It is clear that we are all adults and we know swear words, but not to the same extent grind these dirty words to young boys. The only thing left to sympathize with the parents of these guys. They just broke away from the mother skirt. They would invest in the brains of high, and they put the best mat. It is a shame for this aunt.

Terminated enrollment in military schools. They say temporarily. I wonder who will fill the future vacant posts of junior officers, when the current junior will receive the title and they will need to move on? Or for the current junior ceiling comes? On one of the sites correspondence of the former head of the course of one of the military schools. Let's call him Denis. He is 27 years old. And he has already been the head of the course. “Honored military” can not believe that Denis just wanted to conscientiously fulfill the duties of NK. Surprisingly grown-ups this young man, who managed to stay in an important position in NK, argues. He says with pain that he had little leverage over the cadets, and did not become completely with the arrival of the current MO. Denis's words: “Other times are now, different morals, other methods of education, and, most importantly, other students. They come from society, and society has changed globally. These are 90's children. ” Denis “fascinatingly” spoke about his studies at the Academy at the advanced training courses of NK. The banal widespread failure to comply with statutory provisions is shocking. Nobody gives honor to anyone. What for? Appearance? This is a separate история. Why about Denis in the past tense? Yes, because this young officer, who wholeheartedly wanted to achieve something useful in the Russian army, this army in the person of the school head was simply not needed. Denis told a lot about the system of collecting money for various needs: cadets pass the exams for money (teachers need an additive to DD), parents replenish money for replenishing the inventory, and so on. It is a pity that this young officer, who is worthy of the best in the Russian army, is now a successful manager of an alcohol company and has very good financial prospects in his 27 years. But on the head of the school brought 2 criminal cases. But he did not keep a good officer who wanted to serve the Motherland in the ranks.

Or the famous story in the Lipetsk Aviation Center. Also a young officer, Igor Sulim. To some readers, perhaps his deed seems not entirely ethical. But what kind of ethics of senior officers who used their position can be said. It is very similar to the creation of financial flows from corrupt traffic cops. And it will be very unfortunate if Igor and his friends, young officers who have not yet burned out and want to serve in the Russian army (still want to), will completely discourage this desire.

Or another example. South of Russia. Air defense unit. The unit controls airspace from the south. On the unit is very high responsibility. In the division of incomplete. Places at the screens are not all. People do not get enough sleep. The unit commander himself does not get out of the outfits. He would have quit, but the housing problem has not been resolved.

But there are few similar examples in parts and divisions. But the most remarkable thing is that there are officers who would really like to continue serving in the Russian army. There are a lot of such officers. The state has invested a lot of money in their professional training. Nonetheless, it is those actively willing to serve as officers who are not silent about the shortcomings because of their loyal attitude to the work, fall under the reduction of the OSHM or are dismissed themselves. Very sorry!

Obviously, according to the Ministry of Defense, that hole in the frames, which will be identified in connection with the termination of enrollment in military schools, can be shut up by sergeants. And really. There was fanfare advertising about recruiting a number of military schools, reprofiled to train sergeants for a 34-month program. What just do not write. What just do not promise. One may be confused about whom and how much money allowance was promised. We agreed that it seems like the sergeants will receive more of the young lieutenant. A complete mess. Army need and fleet, which was indicated earlier, is almost 107 thousand people. However, in February of this year, the figure was changed to 65 thousand people by 2015. It seems that 200 new sergeants (this is the first release in 2012) is a significant contribution to solving the personnel problem. And again, sergeants will be trained in the training of draftees. Then there will come a moment of dismissal, and, without becoming a professional sergeant, having hung up clowning accelerators, this failed professional goes to a civilian.

In the distant eighties, our army was called an army without sergeants. Naturally, in the understanding of the Western armies. In fact, it is. How can you do without professional sergeants in the Strategic Missile Forces or the Navy? I remember the sergeants who went to the database with the fourth numbers in the Kartalinskaya division of the Strategic Missile Forces (there is no this division for a long time). These were real professionals who completed, as a rule, technical schools. How can you do without a professional on the ships of the Navy? According to the figurative expression of the officers, for the 2 year of service in the Navy a sailor can only remember the way to the latrine and the galley. Is not the foundation of bullying here buried? Was this the development of officers working with personnel? After the last officer left the barracks, who was the chief? Since the sergeants could be untenable, then someone must have taken this niche. Here is the conclusion.

The fact that the final model was not developed for the modernization of the army is obvious. The leadership of the MoD does not know what to strive for, and is trying to solve the problem with chaotic movements. No doubt, modernization is necessary in modern political and technological conditions. Trying to just repeat the model of NATO armies?
But this is like jumping to the side for an unknown distance with unknown consequences. Army commercialization? And where is the accounting mentality of our conscript contingent, the generation of the nineties? Again rhetorical questions that seem to have no answers. 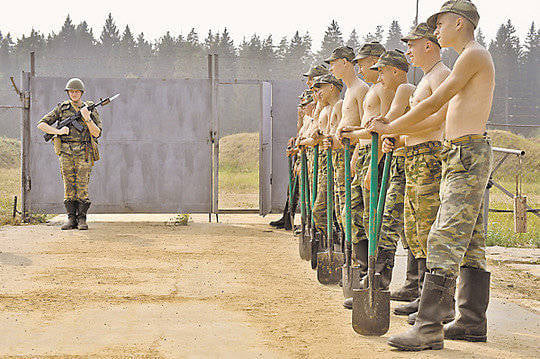 Answering these questions, one can determine the quality of the modern Russian army. What kind of selection in high-tech parts can we talk about? From whom to choose? Recruitment into the army turned into a banal execution of the plan for the heads. The number of recruited coincided with the need and good. And who recruited what quality contingent - it is not for us. So it turns out that even at the end of the service soldiers do not understand much in military affairs.

Unfortunately, all these problems are very global. Society is sick - and the army is sick. And I would like to hope that during our life we ​​will see a new effective army.

We are in Yandex Zen
Pro service in a scientific company
12 comments
Information
Dear reader, to leave comments on the publication, you must to register.