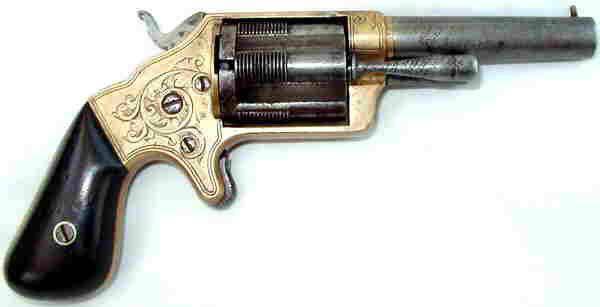 Smith and Wesson on April 3, 1855, July 5, 1859, and December 18, 1860 received patents for the manufacture of revolvers, which were loaded with unitary cartridges from the breech side. Rollin White of Hartford received a similar patent in 1855 and 1858, who, like many gunsmiths, understood the competitive advantage of breech-loading revolvers. In 1860, Smith & Wesson bought Rollin White's patent and became a monopolist in the production of breech-loaded revolvers using a cartridge with a metal sleeve. By bringing lawsuits against competitors infringing on their patents, Horace Smith and Daniel Wesson prevented Colt and many other gunsmiths from legally making breech-loading revolvers, capturing the market for many years. 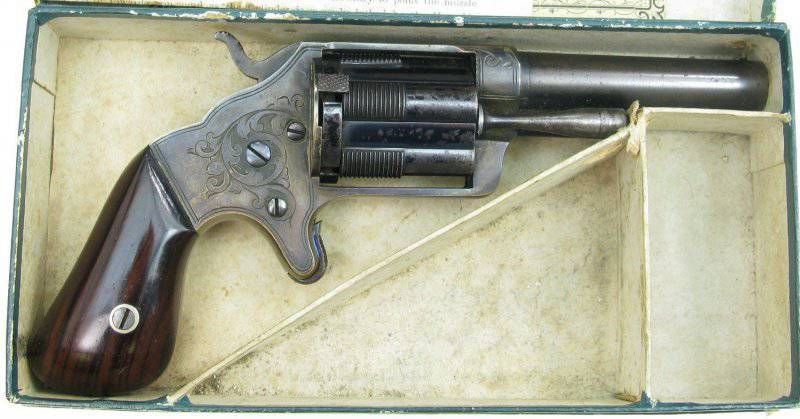 The Brooklyn Arms Company revolver (Brooklyn Arms Slocum) is a typical example of one of the manufacturers' design decisions in an attempt to circumvent Rollin White and Smith-Wesson patents. 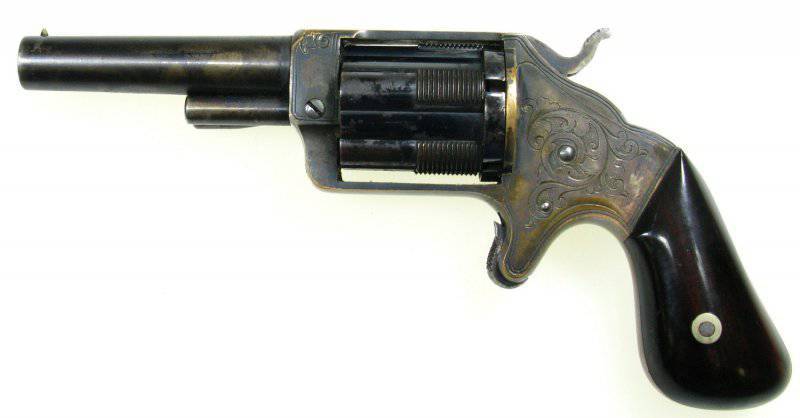 The revolver is designed by Frank P. Slocum from Brooklyn, New York, who received 14's April 1863 patent number X38294. The patent described improvements to the drum design, and the proposed loader system was named: “Side-loading Revolver” (Side Loading Revolver). 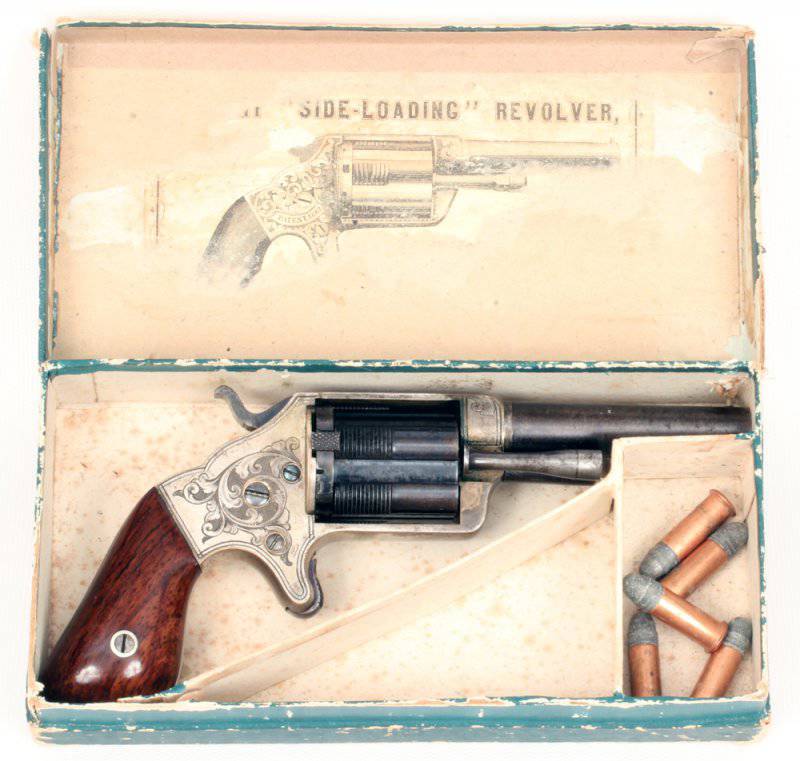 The Slocum revolver used unitary .32 ammunition for ring-ignition caliber with a metal sleeve and a lead bullet, designed by Smith and Wesson. 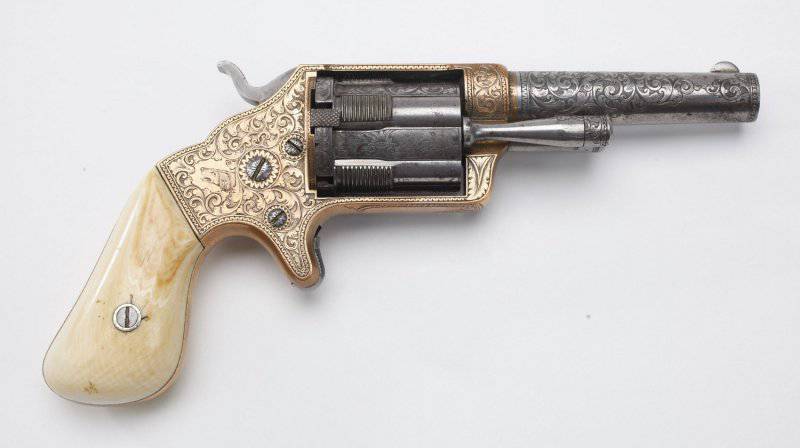 The design feature of the Slokum revolver is that the drum consists of five sections (moving chambers) that move in the longitudinal direction. 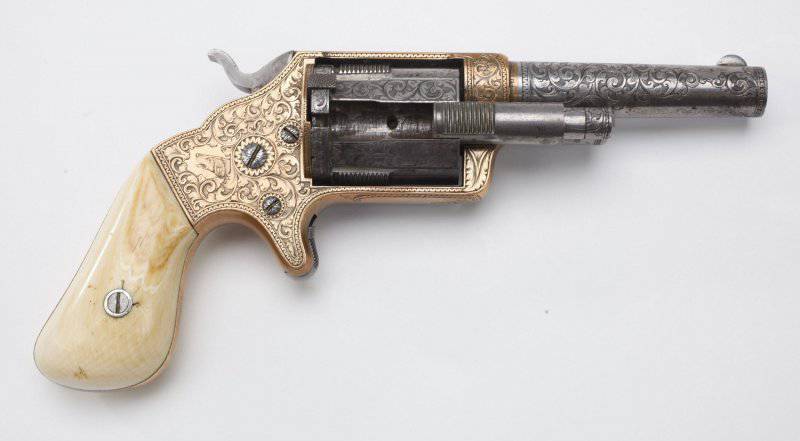 To retrieve the spent sleeve in weapons there is an extractor rod, which is fixed on the right side of the frame in front of the drum and has a flat tip, which provides the convenience of extracting the sleeves. The section (movable chamber) of the drum is installed opposite this rod and the chamber is pushed onto the rod, while the sleeve is removed from the chamber. 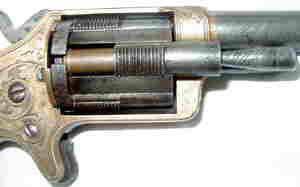 A cartridge is placed in the cavity of the drum formed by the shifting chamber, and the chamber returns to its original position, seizing the cartridge. Thus, all five chambers are charged alternately. 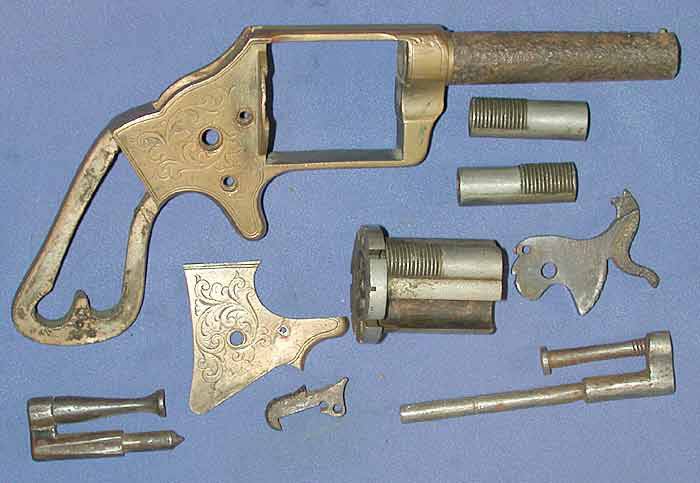 The Slocum revolver consists of a frame with a twisted barrel, a drum with movable chambers, a firing mechanism and a trigger axis. The frame on the left has a cover that is attached with screws. The heads of the screws are the axis of the trigger and trigger. The frame cover provides access to the trigger mechanism. 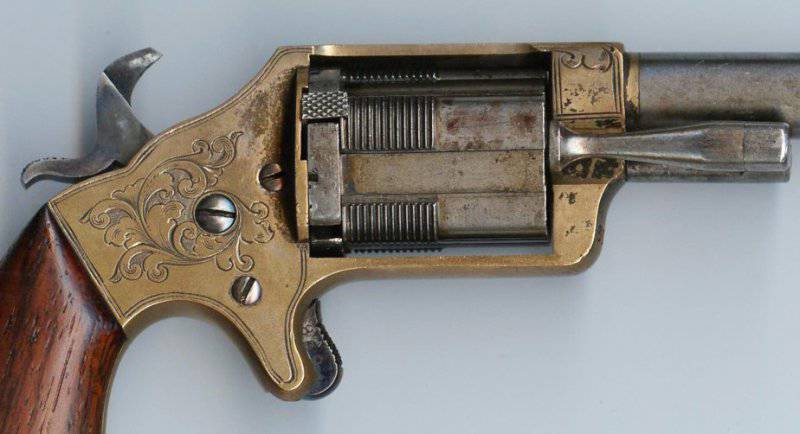 Single-action revolver trigger mechanism. The trigger with a curved needle and flat striker. The nipple type trigger (sometimes called the Mexican) is hidden in the lower tide of the frame. 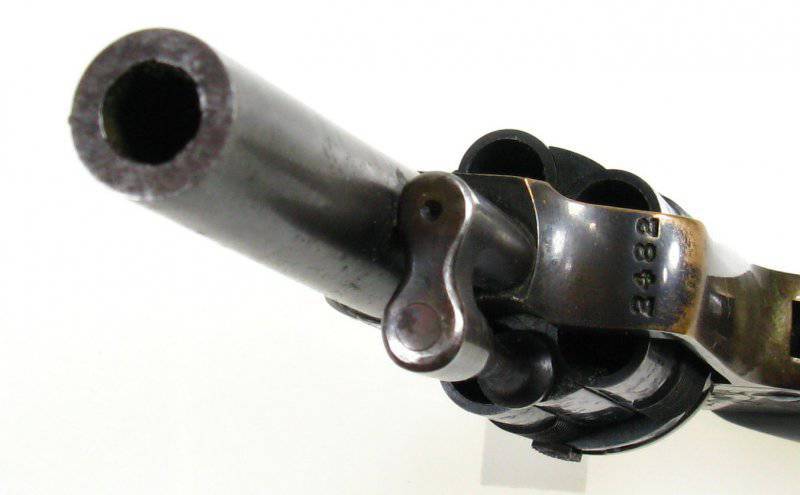 The Slokum revolver has a barrel 76 mm in length of circular cross section with six rectangular grooves of the barrel bore. The serial number of the weapon is plotted on the front tide of the frame.

The frame of the revolver was usually made of brass, the barrel, drum and parts of the trigger mechanism of steel. The cheeks of the handle were made of rosewood or walnut wood.

At the top of the frame is a groove for easy aiming. 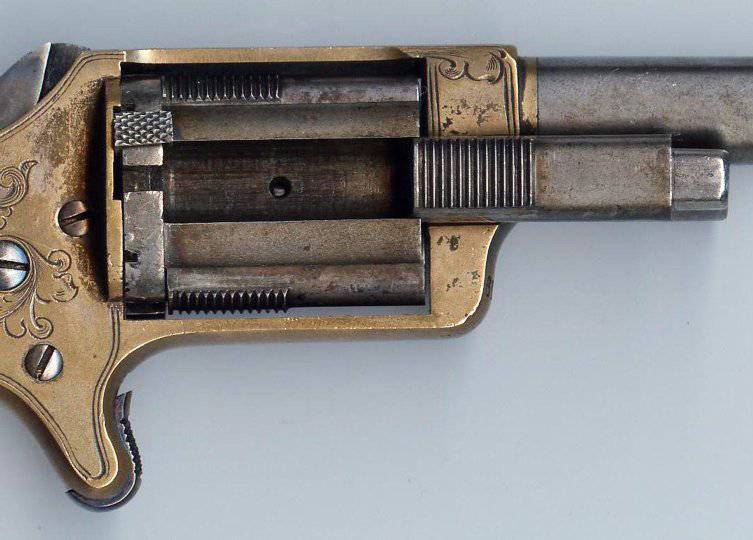 The Slocum revolver has been very well publicized. According to the manufacturer's annotation, the revolver is convenient in that it uses a closed frame design and the well-proven and common 0.32 cartridges of Smith & Wesson caliber. Due to the unusual design, loading the weapon can be performed even in the dark. 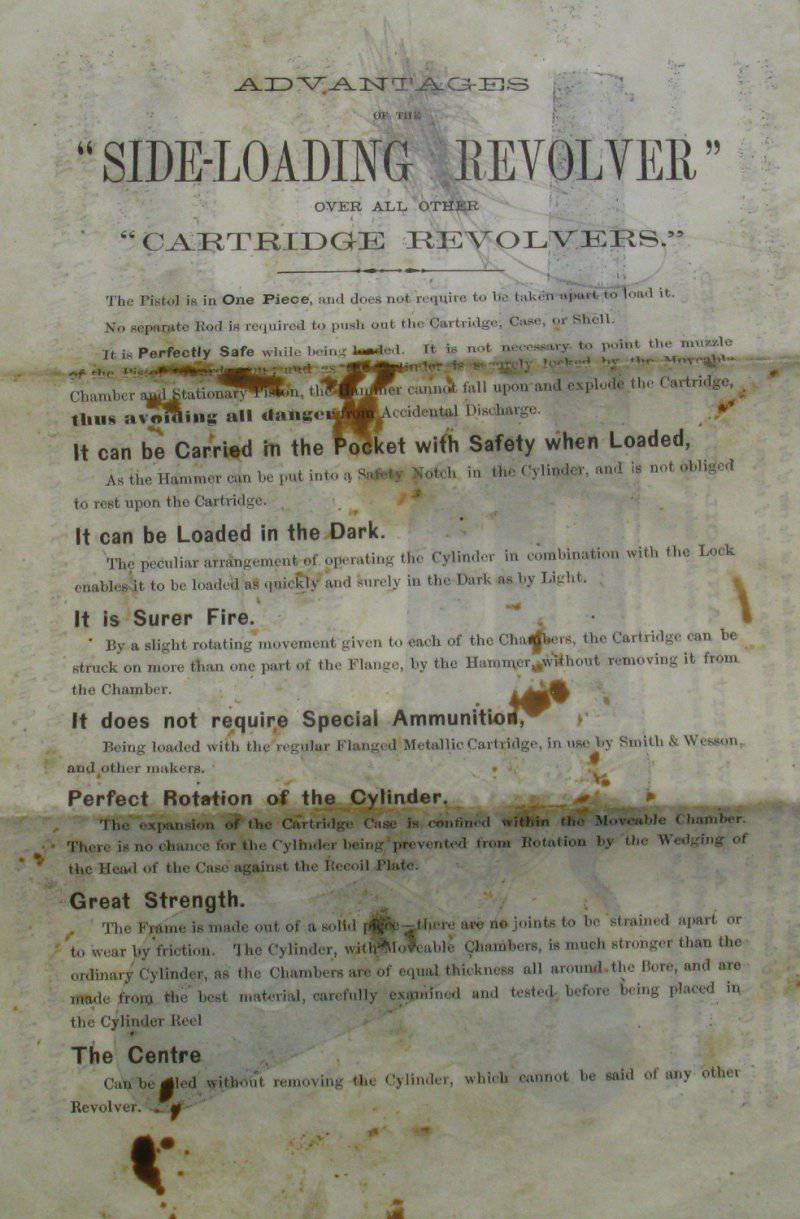 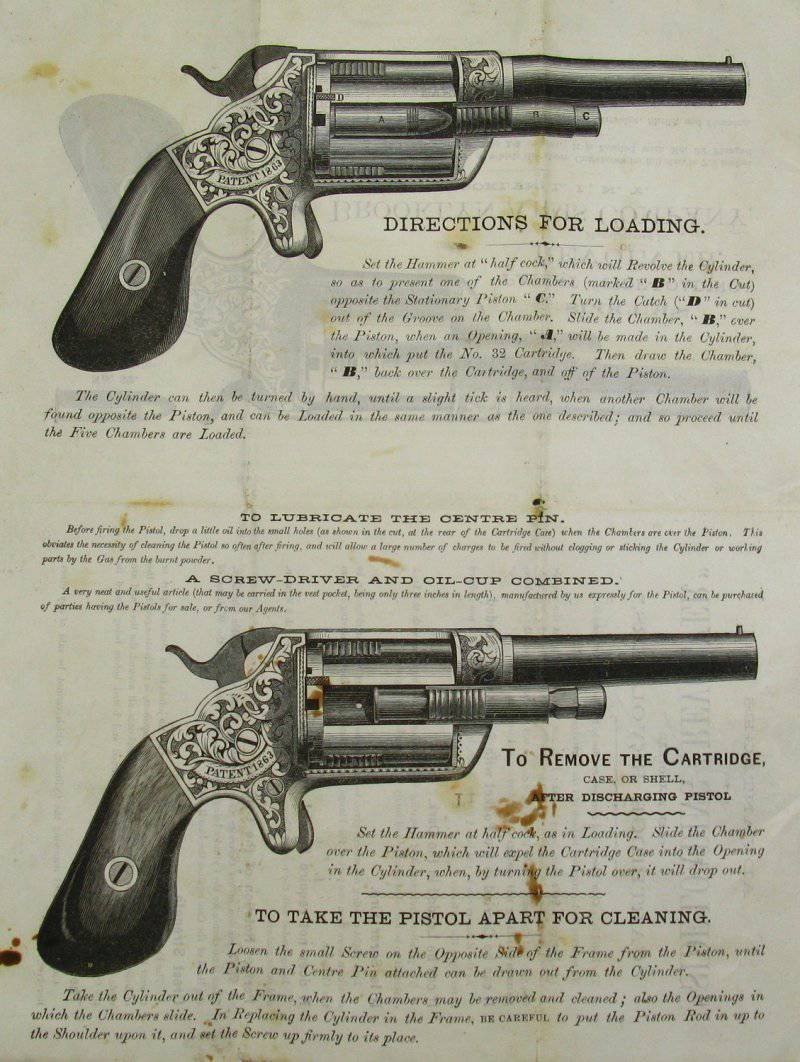 The presence of the breech of the drum prevents the jamming of the sleeves in the frame when inflating their bottom parts, so that the drum rotates perfectly. The presence of holes in the places of installation of movable drum cavities allows lubricating the axis of the drum without disassembling the weapon. 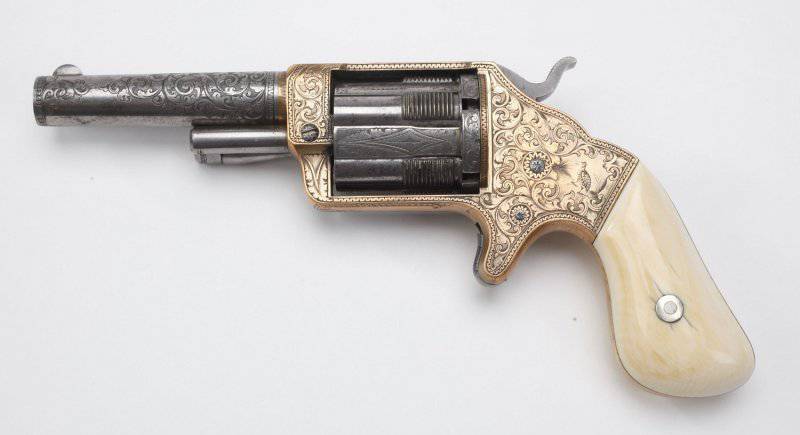 In addition to conventional weapons, the Brooklyn Arms Company also produced Slocum piece revolvers. The cheeks of the arms of such revolvers were made of ivory. 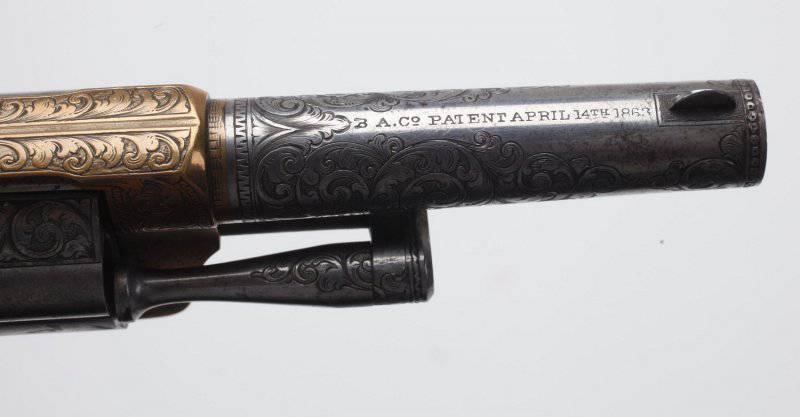 Metal parts of the weapon were covered with an elegant engraving, as a rule of vegetable ornament. 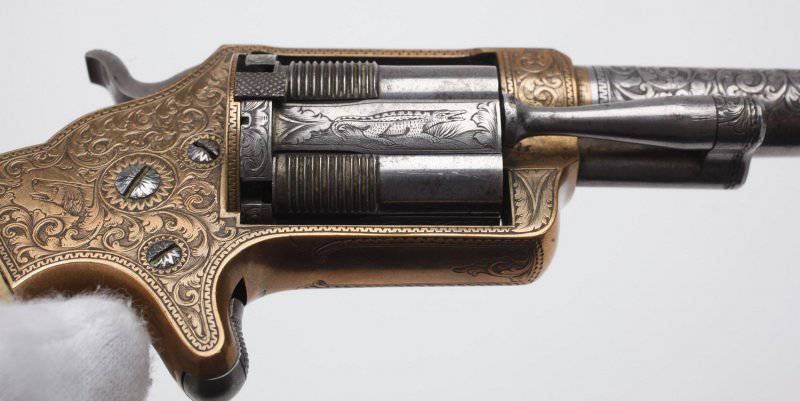 Sometimes images of animals were used in the decoration, as on this revolver, stored in the National Museum of Arms of the USA. 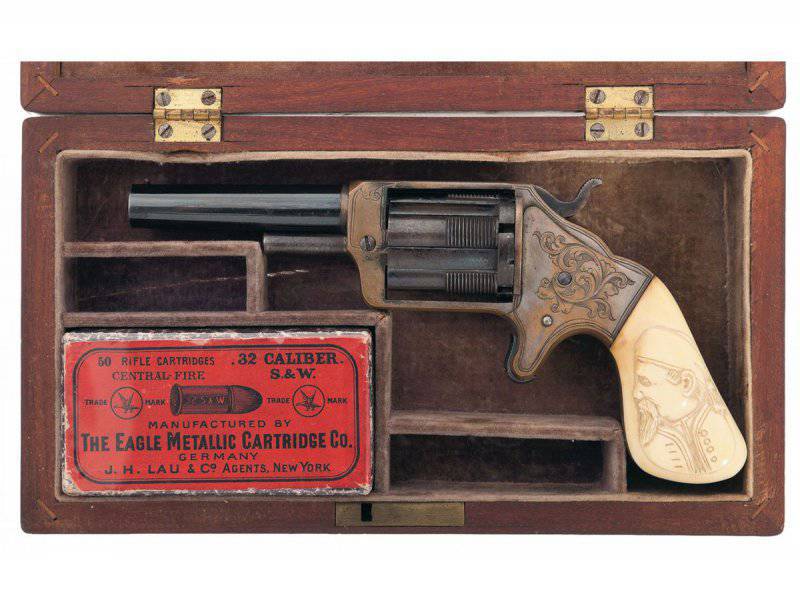 Brooklyn Arms Company produced Slocum revolvers (Slocum Side Loading Revolver) from 1863 to 1864 of the year. A total of three major varieties were produced, slightly differing from each other, approximately 10000 copies of Slocum Side Loading Revolver. The weapon is popular among collectors and is found not only in the US, but also among antique dealers and weapons lovers on the European continent. The price of this revolver in good condition and a standard version is within 2000 — 3000 dollars. The cost of piece weapons in the original weapon case may exceed 8000 dollars.