Foreign experts on the situation with the "Mistral"

27 May 2014
92
Not so long ago, the next stage of testing the amphibious helicopter-carrying dock (DVKD) Vladivostok of the Mistral type, built at a French shipyard in the city of Saint-Nazaire, was completed. The second ship of the same type, Sevastopol, is currently being built by a French and Russian enterprise. While STX Europe employees are assembling various designs, European and US politicians are trying to resolve a dispute that has suddenly arisen around ships for Russia. Official Washington is demanding that Paris stop cooperating with Russia in the construction of two amphibious ships. The French leadership, in turn, does not yet know what to do in this situation. 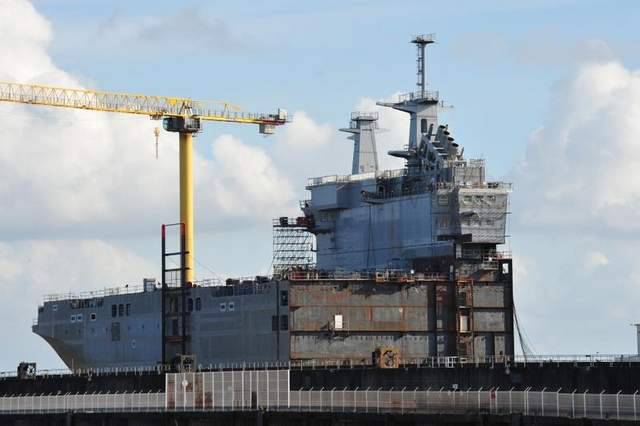 The bow section of the construction of the Sevastopol Far-Eastern Regional Directorate in the dry dock of the STX France shipyard in Saint-Nazaire (c) Leo Van Ginderen / defensenews.com

A few days ago, the famous resource DefenseNews.com published France Might Withhold 2nd Mistral Ship From Russia (“France may refuse Russia in the second Mistral-type ship”) by Pierre Tran. The author of this article gathered the opinions of several analysts and specialists. American and French experts talked about how they see the future of the Russian-French contract for the construction of two Mistral FCVDs.

The author of the publication on the portal DefenseNews.com notes that the French leadership is currently considering a proposal to refuse to transfer the second of the ordered ships to Russia. In connection with the Ukrainian crisis, the United States calls on its NATO allies to abandon military and military-technical cooperation with Russia. In this regard, the official Paris is forced to explore the prospects of the contract for the construction of two amphibious ships.

The article contains statements by Robbin Laird, analyst of consulting company ICSA, operating in the USA and France. Laird believes that the existing Russian-French contract affects the fundamental foundations of French policy and the entire NATO organization. The United States openly calls on France to relinquish its obligations under the existing contract, and Russia faces financial consequences and loss of confidence on the part of potential customers. Thus, the official Paris is between two fires and is forced to find a way out of such an awkward situation.

In accordance with the 2011 contract of the year, the French shipyard of the company STX Europe should build for Russia two MKDDKDDs with a total cost of over 1 billion euros. Two more ships of this type can be ordered later. R. Laird believes that in the case of the first of the ships of the series, which has already been built and is being tested, France "fell into the trap." The ship "Vladivostok" is fully paid and will soon be ready for transfer to the customer, scheduled for October.

In this regard, the current disputes can only go around the second ship, which is under construction. The bow and stern of the hull of the "Mistral" are ready. In June, the ship's feed will be sent from St. Petersburg to France, where all the units will be docked. Construction DVKD "Sevastopol", as noted by R. Laird, has not yet been fully paid. As a result, the French leadership has time to think and a “place to maneuver.” The second ship for Russia is scheduled to be transferred next year.

The Executive Director of the French Center for Strategic Studies and Prospects (Center d'Etude et Prospective Stratégique) Loic Tribo La Spier told the author of the publication on DefenseNews.com that he knows about certain Paris actions to find a way out of the current situation. Among other things, the option of reselling a ship to a third country is being considered. R. Laird confirms that France is trying to get rid of the existing problem. According to the American analyst, the French leadership can demonstrate its position.

At present, the President and the Minister of Foreign Affairs of France are talking about compliance with the terms of the contract and the continuation of all planned work. This can be considered as a basic action plan. However, there may be a backup plan, which implies the refusal to transfer the second MKDD-type DVKD. Laird notes that the situation with landing ships is a political issue. From an industrial or financial point of view, a contract for the construction of two ships and an option for two more is not vital for France. However, the failure of France to fulfill its obligations will have political consequences and will seriously affect relations with Russia.

If France decides not to hand over Sevastopol to Russia, a new question will be raised before its leadership: what to do with this ship? The French military department is experiencing serious financial problems, which is why the new landing craft is guaranteed not to be able to replenish the composition of the French naval forces. The only solution in this case will be the sale of the ship to any of the allies, such as the United States. As far as is known, Paris and Washington have not yet discussed the possibility of such a deal.

Another buyer of the ship, according to Laird, could be Brazil. At the beginning of the last decade, France sold Brazilian the fleet its aircraft carrier Foch, which now serves as San Paulo. An amphibious docking ship of the Mistral type may also be of interest to Brazil, as it will allow its navy to solve a number of new problems. However, the sale of Mistral to Brazil is only an assumption by R. Laird.

Of interest are the words of Joel Johnson, an analyst at Teal Group. France currently has the image of a reliable partner who carefully observes all the conditions of contracts with customers. However, Johnson warned the French leadership against rash actions. He believes that the refusal to fulfill obligations under the existing contract will damage the existing image of France. As an example of a deterioration in relations with potential customers, the analyst cited the United States and some countries in Latin America. After a series of scandals, the latter try not to cooperate with American manufacturers of military equipment and weapons.

The author of the article France Might Withhold 2nd Mistral Ship From Russia mentions a report by the German think tank SWP. According to the staff of this organization, buying a ship under construction in Europe could be a way out of this situation. For example, the German Navy is interested in receiving landing ships of this class. However, none of the European countries currently can not afford such large expenses.

While French politicians are looking for a way out, and analysts are trying to predict their decision, the shipbuilding company STX Europe continues to fulfill its contractual obligations. In early June in France, the training of Russian crews will begin, which will serve on new ships. About 400, people in the Russian Navy will first undergo technical training for which DCI is responsible, and then they will learn to control Mistral ships and their systems in practice.

The publication of the online publication DefenseNews.com is of great interest, since it contains the opinions of several foreign experts who follow the events around the ship building contract. From their statements it follows that abroad perfectly understand the complexity of the situation in which official Paris is located. On the one hand, President F. Hollande and his team are put under pressure by colleagues from Washington, demanding the use of sanctions against Russia, on the other - Moscow, reminding of the unpleasant consequences of such sanctions.

Understand this in France. If you believe foreign experts, then Paris is now actively studying the situation and trying to find a way out of it. What exactly the leaders of the Fifth Republic are going to undertake is a big question. The simplest solution to the problem from an economic and industrial point of view is the continuation of work, which, however, can lead to a deterioration in relations with the allies. Preserving good relations with them will lead to a serious break with Russia and loss of reputation in the eyes of third countries. It is not difficult to understand that Paris now faces an extremely difficult choice.

An interesting fact is that the transfer of the first amphibious assault ship of the “Mistral” type, built for Russia, is considered by foreign experts to be almost a fait accompli, and all their assumptions are made only in relation to the second. It should be recalled that the leadership of France not so long ago announced its plans for the first ship "Vladivostok". While all work will continue in accordance with the approved schedule, and the final decision on the fate of the ship will be made only in the autumn, before the planned date of transfer to the customer.

It seems that the current discussions on the sidelines of the French government relate to the first ship. Approximately 5-6 months remain until the planned transfer of Vladivostok, so the opportunities and risks should be analyzed. In this case, the decision on the first ship, despite the statements of foreign analysts, may affect further developments around the contract and future cooperation between Russia and France.

If France decides not to give up at least one of the built ships, experts suggest selling it to a third party. This offer allows you to get rid of unnecessary ship, without spending on its disposal. However, the authors of this proposal, given the limited financial capabilities of the French Ministry of Defense, forget about the military budgets of third countries. Far from all developed, let alone developing countries, can afford a landing craft worth more than 500 million euros. In addition, the negotiations and preparation for the signing of the contract of sale will take some time.

As we see, foreign experts see the complexity of the situation in which France has fallen. At the same time, both the situation itself and all possible ways out of it are complex and ambiguous.