The story of the first assault rifle Sturmgewehr Stg.44 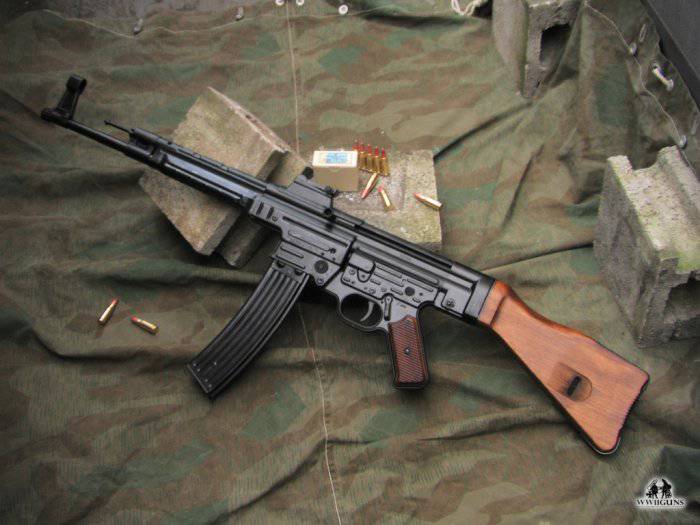 Declare that it is weapon is a real German "Schmeisser", and not the Heinrich Vollmer submachine gun MP 38 / 40, which we are often shown in films about the Great Patriotic War. It was this rifle that became the prototype of the legendary Kalashnikov assault rifle and the not less famous FN FAL, the Belgian assault rifle. It was already on it that there was a regular place for an optical sight, a grenade launcher and other mounted devices. Thanks to this weapon, the designations “intermediate cartridge” and “assault rifle” appeared in modern military terminology. All these statements are true!

History The creation of this weapon began even before World War II, since the development of the 30x7.92-mm “intermediate cartridge” (33mm Kurz) in the 7.92-s of the last century. This cartridge was medium in power between the pistol cartridge (9x19mm "parabellum") and the rifle cartridge (7,92x57mm).

As a result, samples of automatic weapons were created, which were called MaschinenKarabiner (from German - automatic carbine). The sample that was created by Hänel was MKb.42 (H), and the sample by Walter was Mkb.42 (W), respectively.

Following the test, it was decided to develop the design, which was developed by the company Henel. The development was conducted under the leadership of the legendary German gunsmith Hugo Schmeisser. Significant transformations were made in the design, for example, the design of the trigger was taken from the model of the company Walter.

Further work on the development of the automatic carbine was already under the designation MP 43 (MaschinenPistole, from German - submachine gun). The change in the name of the development was due to the fact that Hitler was against the mass production of automatic weapons, referring to the fact that then millions of cartridges for rifles in warehouses would remain unused. Did not change the bad attitude of Hitler to the new models of automatic weapons and the demonstration of the capabilities of the automatic carbine. The further development of this weapon was carried out under the personal control of the German Armed Forces Minister Albert Speer, secretly from the Führer.

And yet the latest weapons were urgently needed in Germany. The firepower of the Wehrmacht infantry by the middle of the war is already significantly less than the firepower of the infantry of the Soviet army, which is armed mainly with a Shpagin submachine gun. This fact required either the production of a large number of bulky and inconvenient light machine guns, or the launch of serial production of automatic carbines, in which the effective range of fire was up to 500 m against 150 m from PCA. This also led to a change in the attitude of Hitler and the whole top of the Third Reich to automatic weapons. Already at the beginning of the 44 year begins mass production of a new type of small arms, which received the name MP 44. These weapons were primarily armed with elite units of the Wehrmacht. At the same time, the MP 44 MP is being upgraded: “Pistolen-Part.43m. E ”- the cartridge of the 1943 model has already become very similar to the current automatic cartridge, in the pool of which there was a steel core.

The automatic carbine Sturmgewehr.44 was an individual small arms, which is built on the principle of automatic top-drainage of a part of the powder gases driving the gas piston. Locking the barrel was made by tilting the bolt down over the ledge in the receiver. The receiver was made of extruded steel sheet. The trigger mechanism with a pistol grip joined the receiver and folded forward and down with incomplete disassembly. The butt was made of wood, was attached to the receiver and was removed during disassembly. Inside the stock was located return spring.

The trigger mechanism of the rifle allowed automatic and single fire. StG.44 had a sector sight, an independent translator of fire modes and a fuse, the shutter handle was located on the left and when firing it moved together with the bolt frame. To attach a rifle grenade launcher, a thread was made on the muzzle of the barrel. In addition, Stg. 44 could be equipped with a special curvilinear device, which was intended for firing from trenches, tanks or other shelters.

Advantages of Sturmgewehr.44. The rifle effectively shoots bursts at a distance of up to 300 m and single shots at a distance of up to 600 m. This is more than two times higher than that of PCA. For snipers was built rifle MP-43 / 1, which allowed to conduct aimed fire to 800 meters. A fourfold telescopic sight or a ZG.1229 Vampire infrared sight could be mounted on a milled mount. When firing recoil was almost 2 times lower than the carbine Mauser-98K. This increased the accuracy and comfort of shooting.

Its flaws. First, it is a big mass. The rifle was almost a kilo heavier than the Mauser-98K carbine. Wooden butt often broke during unarmed combat. The flame, which escaped from the barrel when firing, very much unmasked the shooter. A long magazine and high sights when shooting a prone forced the shooter to raise his head high, this significantly increased his profile. In order to reduce the height of the weapon, stores were made with a capacity of 15 or 20 cartridges.

The machine gun was an expensive trophy not only from the Soviet troops, but also from the allies. There is documentary evidence of the use of these weapons by soldiers of the Soviet Army during the assault on Berlin.

At the end of the war, Sturmgewehr.44 assault rifles were used by the GDR police and the Czechoslovak army. In Yugoslavia, the rifles held out on Airborne Troops until the 70s of the last century.

In addition, the assault rifle, which Hugo Schmeiser created, had a great effect on the post-war development of small arms. Thus, the design of the Belgian FN FAL and Kalashnikov assault rifle were, if not copied, then made according to a scheme that is very similar to Stg.44. It is also very similar to the Sturmgewehr.44 modern state automatic M4 carbine.