Achtung! Russians in the sky 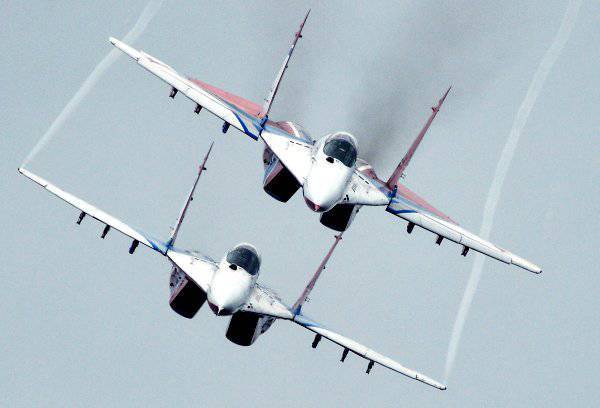 The aerospace exhibition ILA-2014 is gaining momentum in Berlin. It is interesting, first of all, because it has become an indicator of how much Western sanctions have affected international cooperation with the participation of our country. The first two days of the exhibition showed that business and industry circles of almost all European countries are determined to continue cooperation with Russia.
1200 companies and organizations from 40 countries participate in the Berlin Salon. Russia is most fully represented by enterprises of Roskosmos. For the first time, the United Rocket and Space Corporation participates in the international exposition. The aviation industry of our country is demonstrated by the stands of the KLA and the holding company Helicopters of Russia.

This time we do not show flying samples in Berlin, but Russian aircraft are nevertheless well represented. everyday aviation The show begins with aerobatics of the MiG-29 fighter. Pilots of the Polish Air Force demonstrate their skills and qualities of a combat aviation veteran, who remains one of the best front-line fighters to this day. The rather large exposition of the Polish and Czech Air Forces at ILA-2014 consists of the MiG-29, as well as the Mi-24 and Mi-28 helicopters. One of the Mi-24 has on its board a "portrait" of the Amur tiger - it looks impressive.

The main trends of the Berlin salon are drones and the latest technology aimed at improving the environmental performance of aircraft.

20 companies from 8 countries show their drones. UAVs today are actively used in various fields of both peaceful and military life. Along with powerful devices such as the German ALADIN and LUNA, one can see a large number of almost toy apparatuses, which are nevertheless capable of performing very serious tasks.

Alas, our country does not show unmanned aerial vehicles even in the form of layouts. It seems that we simply do not have them. This is partly the case. On the MAKS salons domestic drones are demonstrated. But whether they work or are still concept projects is unclear. In any case, no one’s own production drones exhibited to any international air show Russia.

Of those projects that we show on ILA-2014, experts are of interest to the MiG-35 fighter, training Yak-130, and also helicopters: the combat Ka-52 and the new transport and passenger Mi-38.

Mi-38 presented in medical-evacuation version. It can be operated in a wide range of climatic conditions, including maritime, tropical and cold climates. Serial production of the Mi-38 is scheduled to begin in 2015 at the Kazan Helicopter Plant. According to experts, this machine will perfectly complement the range of Mi-8 / 17, considered one of the most successful rotary wings in the world.

Turkey with pathos shows a helicopter of its own design T-129 ATAK. At the end of the last century, Kamov employees developed an interesting Erdogan helicopter specifically for Turkey. And if Ankara had staked precisely on that car, the Turkish Air Force would have one of the best helicopter gunships in the world today, as if from its own production. Americans are not allowed. And the Turks were able to create only ATAK using their own forces, which looks, if not funny, then somewhat primitive.

The Germans continue to fight for the environment. Their all-electric E-Fan can already be in the sky for almost an hour. The machine does not pollute the atmosphere and is almost silent. The developers are confident that the first customers will be aviation schools, of which there are many in Europe. Traction in the Old World is as great as in the USSR in the 30s. If you remember history, it should be noted respect for it in almost all countries of Western Europe. When the 1 th Luftwaffe fighter jet Me-262 rises into the sky, nobody can remain indifferent on the ground. Flying retro-planes - of course the decoration of any air show.

Still, the main thing on ILA-2014 is aspiration for the future. And the most ambitious plans can be implemented only in global cooperation. And there is no alternative to this, no matter what sanctions Washington may threaten.