22 May 2014
28
Gunsmiths have been working for decades to improve accuracy weapons. The use of riflescopes and the development of the design of the weapon itself seems to be coming to its limits. Prospective electronic systems integrated into the weapon design can ensure the further development of precision weapons. This is precisely the attitude taken by the Texan arms company TrackingPoint Inc. A few years ago, she introduced the concept of PGF (Precision Guided firearm - “Precision Guided Small Arms”), offering solutions to significantly improve the accuracy when shooting at long distances.


In accordance with the PGF concept, a TTX complex (Tag Track Xact) was created. It includes an NTS (Networked Tracking Scope) electronic sight with an integrated laser range finder, a ballistic computer, and automatic tracking of the marked target. In addition, a weapon trigger control system and a video camera for recording the process of aiming and shooting are included in the scope. The video signal from the sight along with the necessary information over the radio channel can be transmitted to the smartphone or tablet arrow on which the special software is installed. In combination with some solutions used in the design of the rifle itself, the electronics of the PGF complex makes it possible to achieve sufficiently high characteristics. 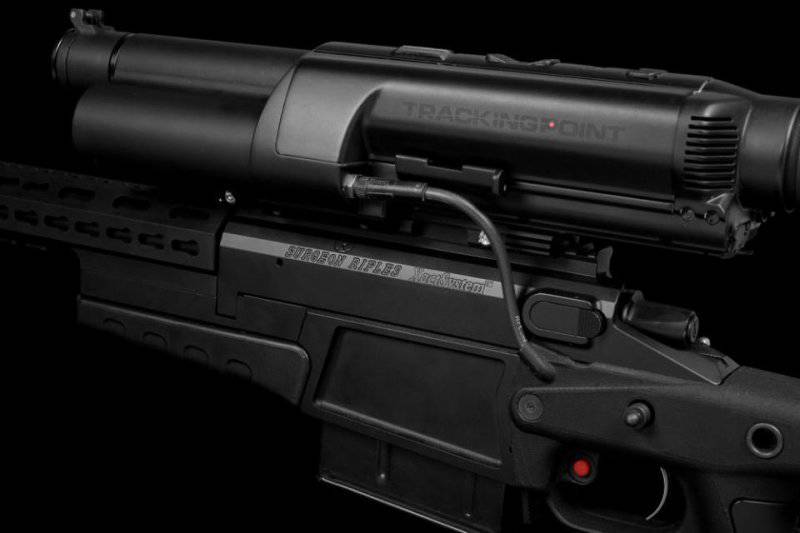 To fully demonstrate and use the full potential of the proposed TTX complex, TrackingPoint, in collaboration with Surgeon Riffles, developed the XS rifle range (XactSystem), which included several types of weapons. All new rifles are equipped with a number of common systems, but they have several noticeable differences aimed at attracting a wide range of shooters.

TrackingPoint XS1 rifle is designed to use .338 Lapua cartridges. The rifle itself was designed and manufactured by Surgeon Riffles, and TrackingPoint installs all the necessary electronic systems on the weapon and transfers the finished product to customers. The XS1 rifle is completed with all the necessary components and is supplied to the shooters in the Pelican hard case with cells for all elements of the shooting complex. 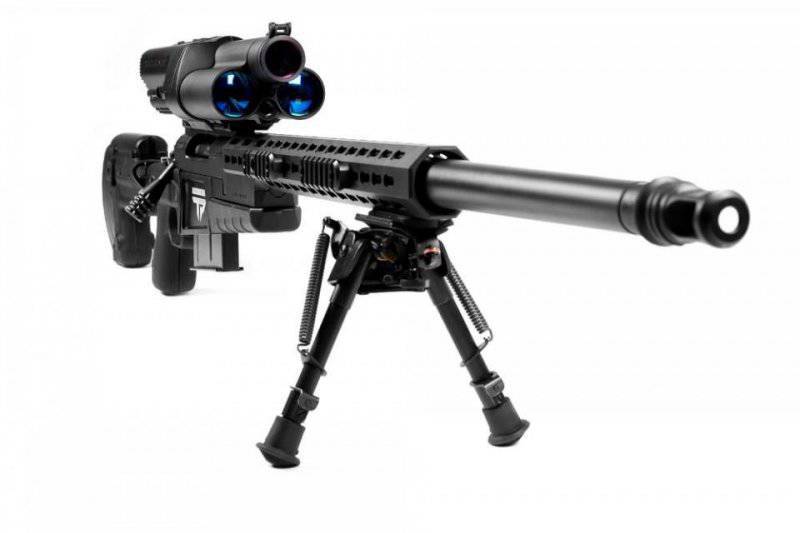 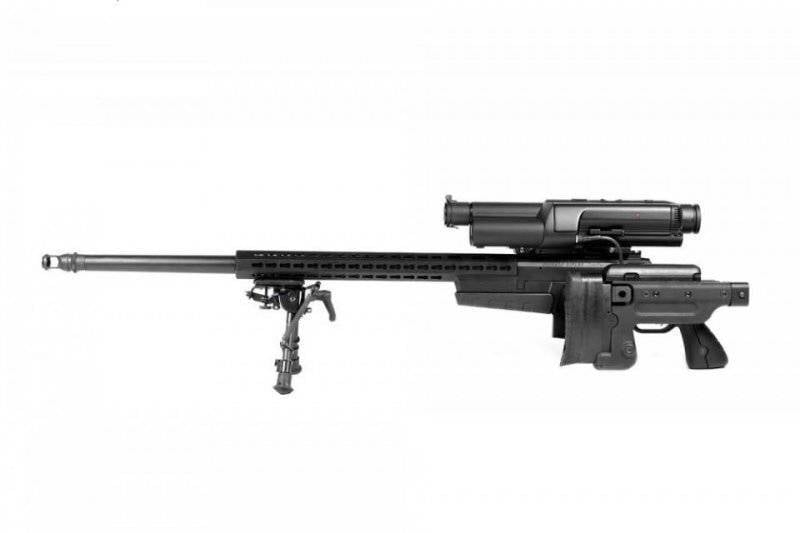 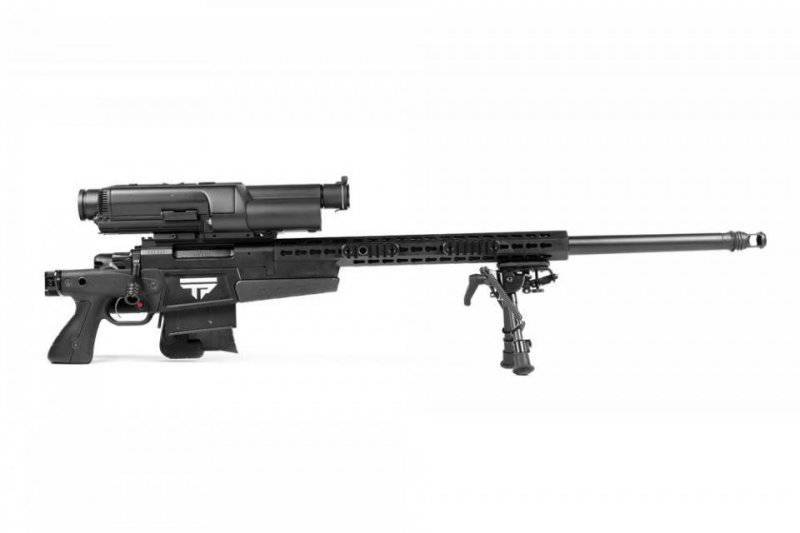 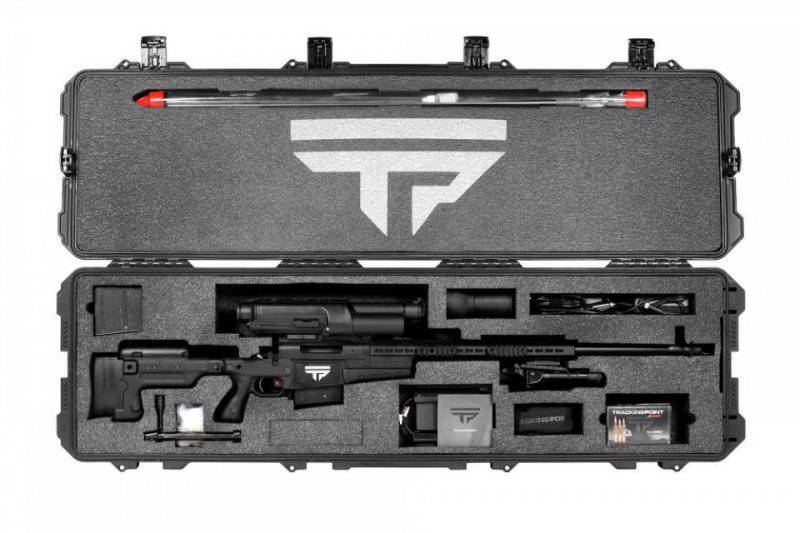 Weapons weighing 9,2 kg (with a sight and equipped magazine) have a length of about 1,25 m (with the butt unfolded) and is equipped with a barrel length of 27 inches (686 mm). To improve the accuracy of shooting the rifle is equipped with a sliding bolt with manual reloading. A relatively powerful cartridge and a long barrel provide the initial bullet speed at the level of 830 m / s. When using an NTS sight, the firing range reaches 1200 yards (about 1,1 kilometers).

The TrackingPoint XS1 rifle is equipped with a folding butt with adjustable length and height, a folding Harris bipod and an AAC Blackout muzzle brake. In addition, the package includes two box magazines for five cartridges each, an 3 battery for electronics and a charger for them, 200 cartridges .338 Lapua with a Sierra OTM XactShot bullet weighing 200 or 300 facets. All elements of the shooting complex are delivered in a hard case.

Networked Tracking Scope electronic sight allows the shooter to effectively fire at long distances, and at the same time has a great influence on the use of weapons. The sight components allow you to search for the target and aim, using the magnification from 6x to 35x. Having found the target, the shooter must place a sight mark on it and press the button located on the trigger guard. After that, automatics captures the target and calculates corrections for firing. Almost all the necessary parameters are determined automatically; the arrow needs to enter only information about the strength and direction of the wind. To fire a shooter, you need to combine the target mark with the sight mark and pull the trigger. When target tracking is on, the automatics will block the trigger mechanism until the tags are fully aligned. When the points coincide completely, the scope will allow the rifle to fire a shot independently.

It is alleged that the TrackingPoint XS1 rifle, like other XactSystem family weapons, can fire with accuracy to the point of ammunition capabilities. These words are confirmed by demonstration shooting and advertising videos. A few days ago a video was published by the RatedRR team, in which the target for the XS1 rifle was a smartphone. Several bullets were able to hit the target with a size of 146x70 mm at a distance of 1125 yards (1,03 km). Moreover, one of the shots was able to hit the smartphone in the upper edge (about 70х10 mm), and before that the bullet went tangentially and left a characteristic groove on the screen of the gadget.

TrackingPoint XS2 rifle is a variant of XS1, designed for firing at shorter distances. This mission has affected the technical appearance of the weapon. The XS2 rifle uses .300 Winchester Magnum cartridges with a Sierra Match King OTM bullet weighing 220 facets and has a shorter 24 inch (609,6 mm) barrel. The reduced length of the barrel led to a reduction in the mass of the weapon to 8,6 kg. The total length with the butt spread out is reduced to 1,16 m. 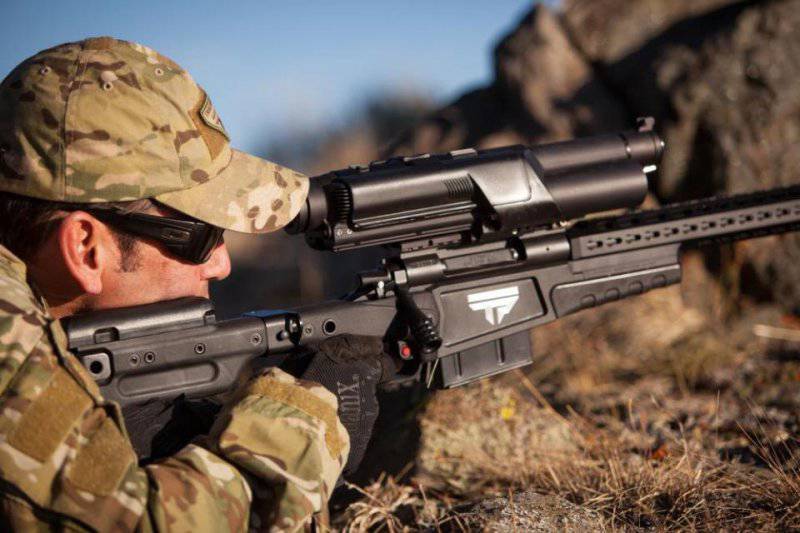 The XS2 rifle complex is completed with a variant of the NTS sight, designed to calculate the bullet ballistics of the .300 Winchester Magnum cartridge. The initial speed of the bullet is declared at the level of 860 m / s. Target range when using the system TTX - 1000 yards (914 m). Due to the reduction in firing range, the NTS rifle for the XS2 rifle has a maximum increase in 30 x. 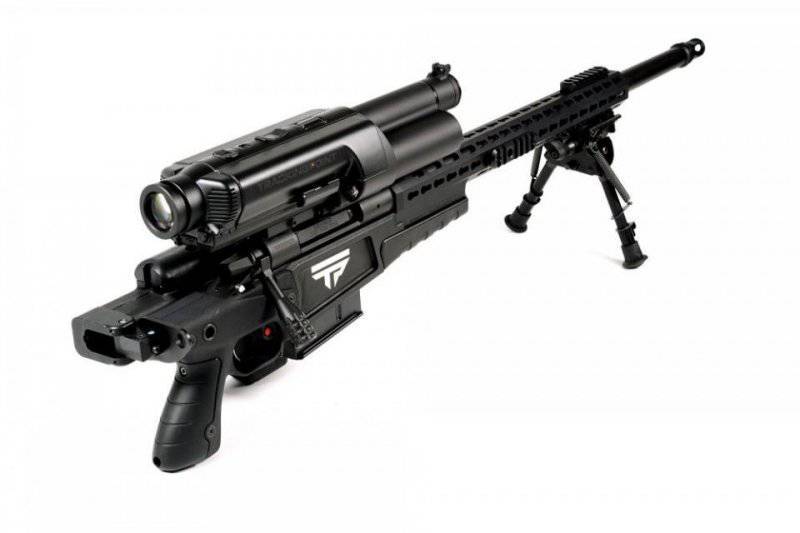 With the exception of parts and components directly related to the use of other cartridges, the XS2 rifle is similar in design and scope of delivery to the previous XS1. The shooting algorithm also remained the same: the electronic sight accompanies the chosen target and determines the moment of unlocking the firing mechanism.

The third rifle of the series, TrackingPoint XS3, became the embodiment of the course for reducing the target range. Like the previous family rifle, the XS3 uses the .300 Winchester Magnum cartridge. In this case, a cartridge with a Long Range X Bullet bullet weighing 190 facets is recommended. To use a lighter bullet rifle is equipped with a barrel length of 22 inch (558,8 mm), providing the initial velocity of the bullet at the level of 870 m / s. The tracking range of the TrackingPoint XS3 rifle has been reduced to 850 yards (780 m). The NTS rifle scope in the XS3 rifle version has the appropriate settings and 30 multiple magnification. 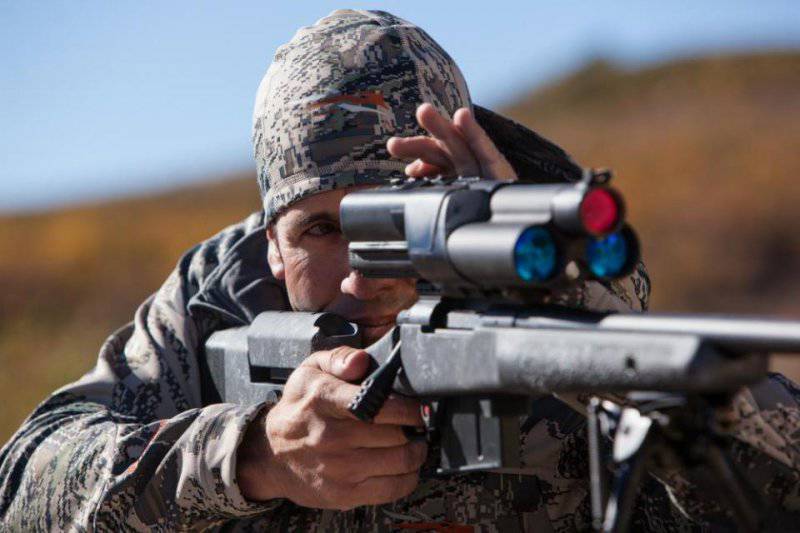 XS3 was the first rifle in the series, which received a full box. Instead of a separate forend and stock, XS3 received a McMillan A5 plastic box with a fixed butt length. The total length of the weapon is 1,21 m, the weight with a sight and magazine is 7,4 kg. The scope of delivery is similar to the previous rifles of the family.

As far as we know, the XS3 rifle interested hunters and became quite popular for weapons, which used the latest ideas and solutions. However, as TrackingPoint representatives say, some shooters expressed a desire to get a rifle with XS3 ergonomics and XS1 characteristics. The gunsmiths went to meet them and developed a weapon called TrackingPoint XS4. 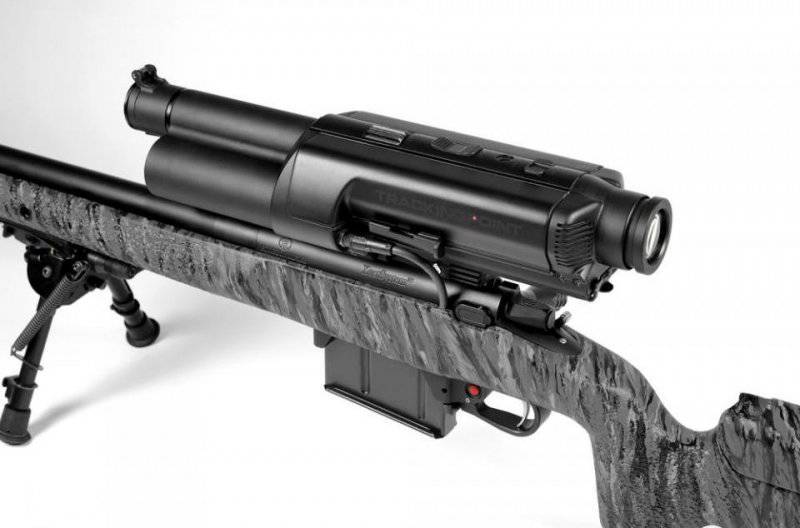 The new XS4 rifle is a “hybrid” of previous models of the family. This weapon is actually a XS1 trunk, receiver, internal mechanisms and an NTS sight mounted on a McMillan A5 plastic box, borrowed from the XS4. The TrackingPoint XS338 rifle is designed to use .300 Lapua cartridges with Sierra Match King OTM (Gran 280) or LRX (Gran Gran 1200) bullets. Sighting range when using the electronic sight NTS - 1,1 yards (XNUMX km).

In addition to the XS family, TrackingPoint launches two other weapon lines based on the TTX system. Thus, in the family under the AR symbol, three self-loading rifles based on the AR-15 platform are produced. The TP 750 rifle range is somewhat similar to the XactSystem: it is a non-automatic, longitudinal-slide weapon designed for firing 750 yards (685 m). The different models of the AR and TP 750 ranges differ in the cartridges used. 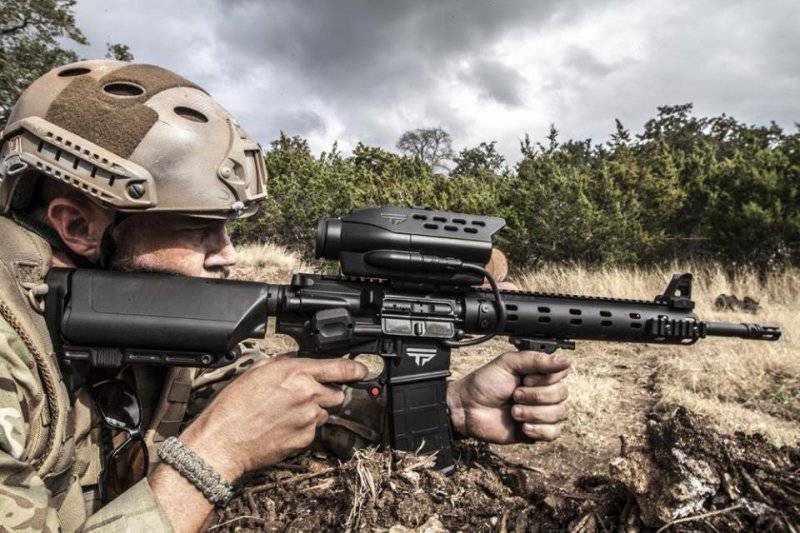 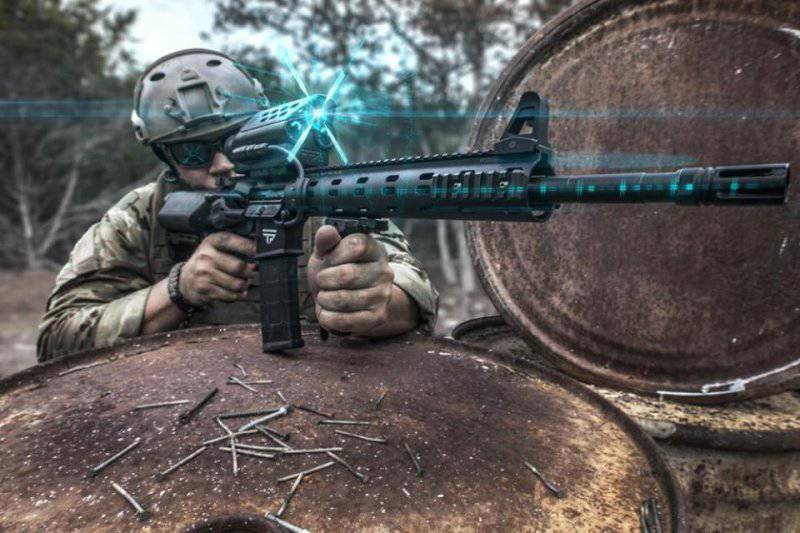 All TrackingPoint rifles based on the TTX system are of great interest to potential customers. In addition, to increase the interest of the shooters produced different versions of the weapon, designed to use several types of ammunition. Nevertheless, high-precision rifles with electronic sights NTS have not yet received wide distribution, and are unlikely to become popular in the future. The reason for this is their high cost. For example, the recommended price of a XS1 rifle exceeds 22 thousands of US dollars. The minimum price tag for TrackingPoint weapons is a little less than 10 thousand dollars. Such a high price immediately reduces the number of possible buyers of new weapons. Those shooters who can afford to pay such a large amount for one rifle will not necessarily choose the “smart” TTX system.

However, Texan gunsmiths continue to manufacture original weapons and electronics for them. It is likely that in the very near future, TrackingPoint will present a new model of high-precision small arms equipped with a TTX system and an NTS electronic sight.